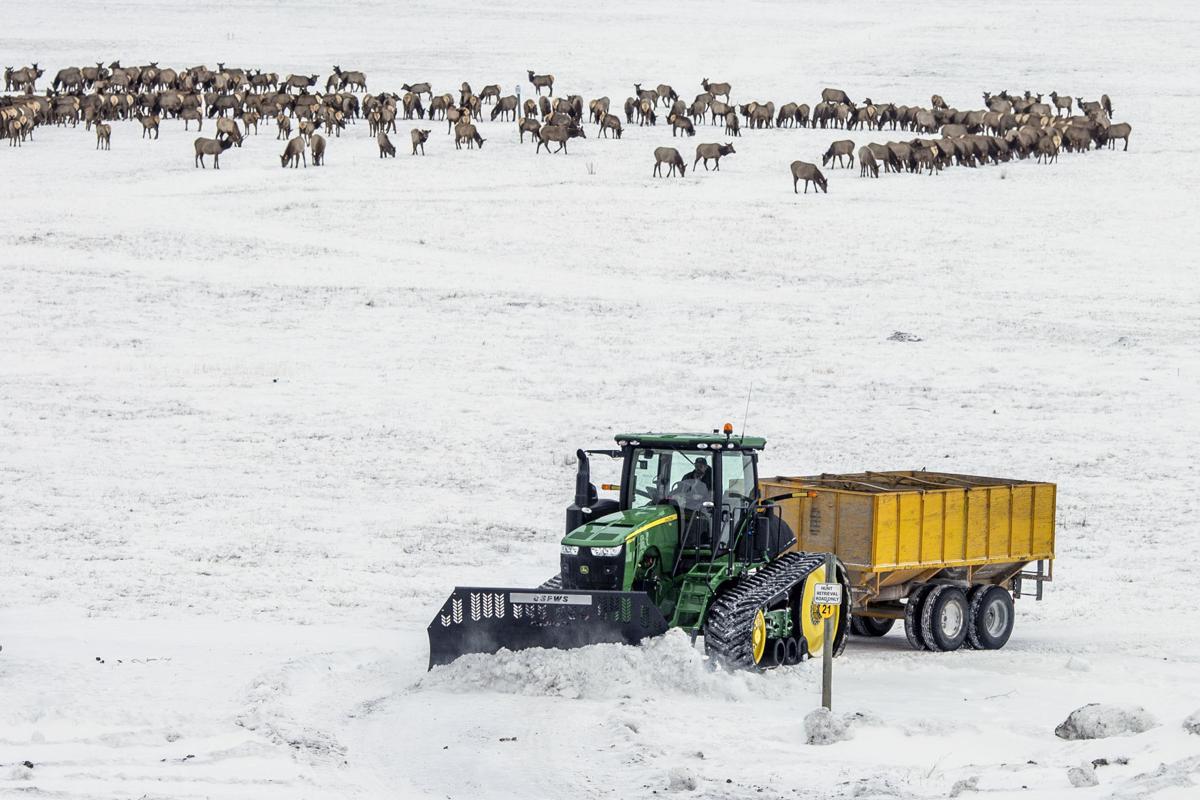 Elk gather to eat alfalfa pellets spread by a feed trailer last February on the National Elk Refuge. Teton County commissioners are urging changes to the century-old system of feeding due to the discovery of chronic wasting disease within the Jackson herd.

Elected officials whose constituencies would be most affected by a surge of chronic wasting disease within the Jackson Elk Herd are asking Wyoming wildlife managers to proactively and strategically ease up on supplemental feeding that facilitates the spread of the disease.

A draft letter from the Teton County Board of County Commissioners, scheduled to be marked up Monday, describes the recent discovery of the lethal, incurable prion disease in feedground elk as “dire.”

The board’s letter calls for a new approach to managing wintertime elk and for a system that will compensate landowners willing to host more-dispersed herds that would result from dissolving the century-old practice of feeding on the National Elk Refuge.

“CWD cannot be ignored,” the commissioners’ letter states, “nor can the threats to winter elk mortality and agricultural operations posed by the potential changes and reductions in the use of feedgrounds. Yet actions must be swift. And the time to act is now.”

The Wyoming Game and Fish Department has “an imperative” to step up and develop a new suite of elk management policies and tools that integrate private landowners, Teton County, and federal land and wildlife management agencies, the commissioners wrote.

No major changes to elk feeding programs have been triggered by the discovery of chronic wasting disease in elk west of the Continental Divide. The presence of the degenerative brain-wasting disease locally was confirmed in mid-December in a cow elk shot in southern Grand Teton National Park.

Ahead of that development, Game and Fish had already begun to work on a public process that will culminate in an elk feeding management plan. But the state agency’s leadership has already indicated that it is not open to abrupt changes.

“There’s no real potential to really change feeding operations in the short- or the midterm,” Game and Fish Director Brian Nesvik told lawmakers Dec. 8. “This is not a proposal to close feedgrounds.”

The spread and prevalence of CWD are likely to be exacerbated by the dense congregations of elk that gather to eat hay on Wyoming’s 22 state feedgrounds. On the much larger National Elk Refuge, wapiti come into contact with each other 2.6 times more often when they’re presented with supplemental alfalfa feed, recent research found.

The governmental feeding of 20,000 elk in Teton, Sublette and Lincoln counties has roots that go back more than a century, and that remains staunchly supported by the ranching and hunting and outfitting industries. Benefits include increased winter survival and drawing elk away from hay meant for cattle, where intermingling can spread disease to livestock.

But the likely calamity of CWD on the feedgrounds has been litigated repeatedly, with elk feeding widely condemned. In 2017, members of the Montana Fish and Wildlife Commission wrote their Wyoming counterparts urging them to stop.

“We respect the fact that how Wyoming manages its affairs is up to Wyoming,” Montana commissioners wrote at the time. “However, Montana’s ability to combat CWD will depend upon decisions that Wyoming makes about its wildlife management. As a commission, we believe that we cannot successfully address CWD without Wyoming’s help. As your neighbor, we ask you to begin the process of closing these feedgrounds.”

Teton County’s draft letter to the state Game and Fish Department pledges a solutions-based partnership in the effort to phase out feedgrounds. Commissioners call for compensatory “elk occupancy agreements” that allow elk to disperse onto private lands when they would otherwise concentrate on feedgrounds.

They also call for partnerships with land conservation organizations and for science-based thresholds for CWD and brucellosis infection rates that trigger management changes.

Teton County commissioners Mark Newcomb and Luther Propst both had a hand in drafting the county letter.

The missive’s fine points will be hammered out at the board’s voucher meeting set for 9 a.m. Monday, which will be broadcast at TetonWyo.org and aired over Zoom for people who would like to make public comments.