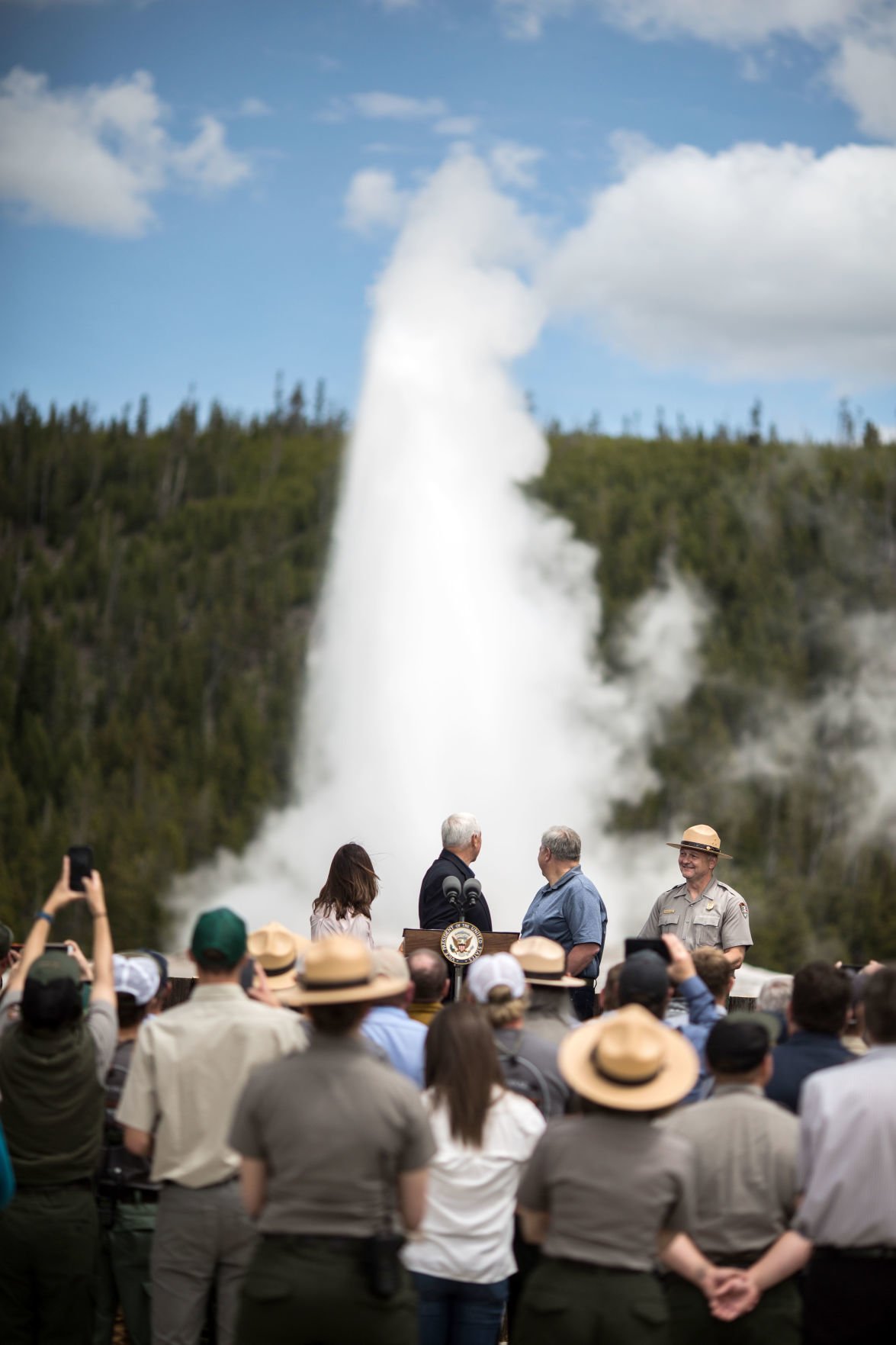 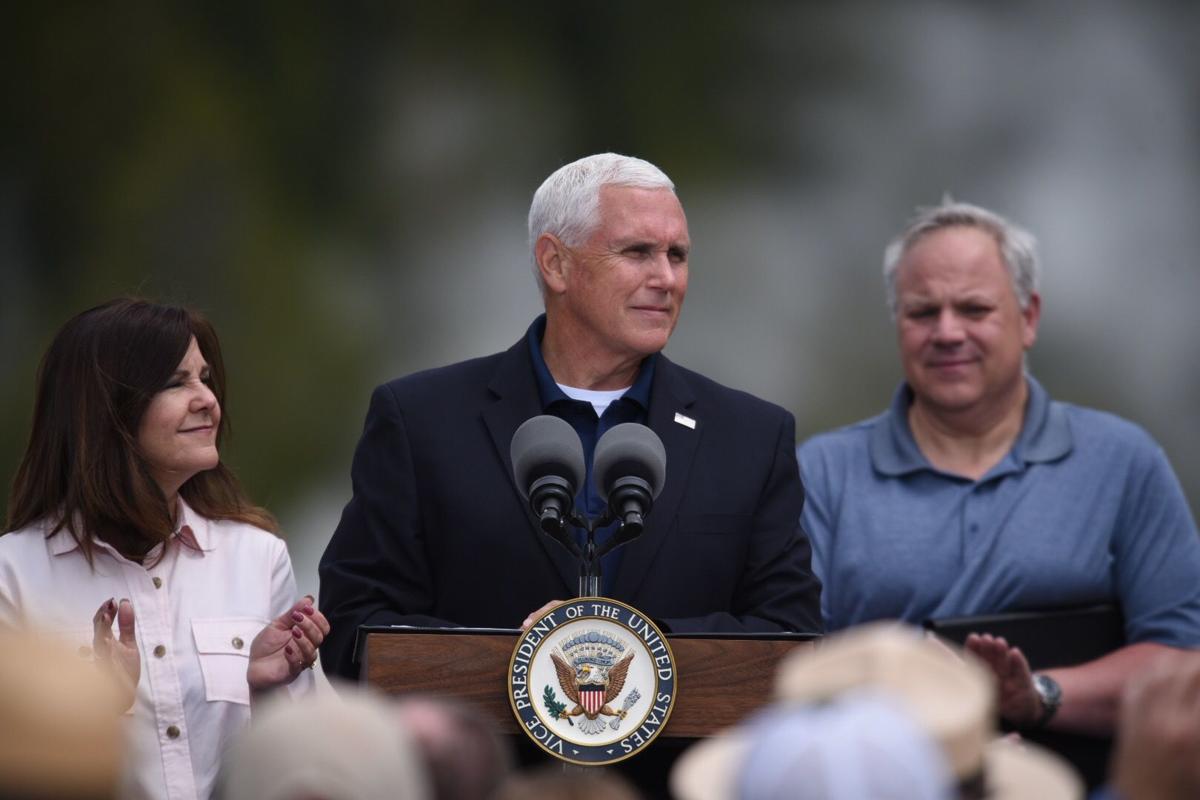 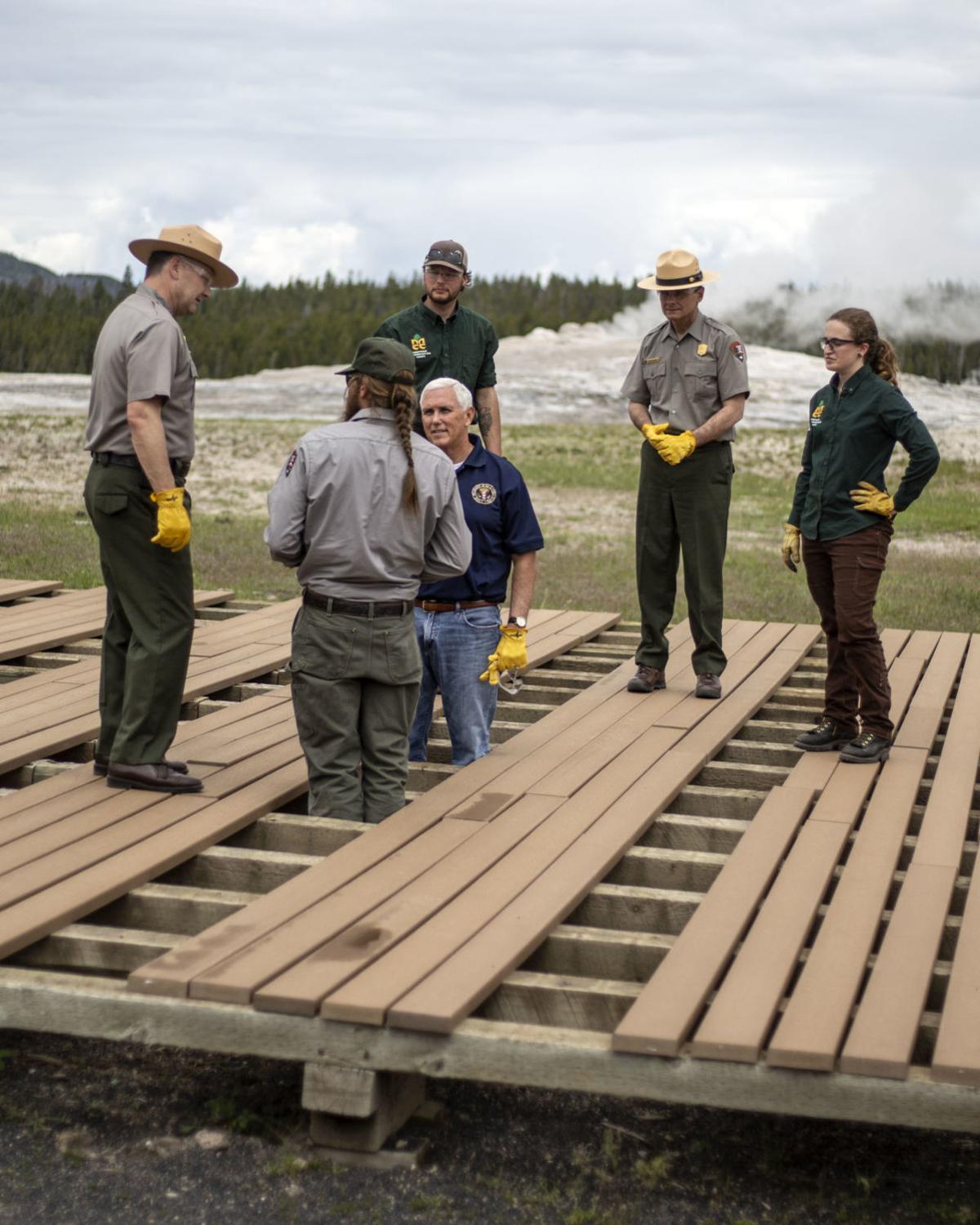 YELLOWSTONE NATIONAL PARK — Mike Pence’s 60 year-old forearms must have been twinging with pain by the third or fourth trip hauling long and evidently heavy composite planks to an under-construction section of the Old Faithful boardwalk.

Let’s go with two boards this time, he muttered to U.S. Department of Interior Secretary David Bernhardt, instead of three. The project was a real one — rebuilding a structure that millions of Yellowstone National Park visitors shuffle over annually — though Pence and Bernhardt’s labor was for show, of course.

Nevertheless, the vice president and his wife, Karen Pence, momentarily stepped into the shoes of the National Park Service workers whose day-to-day duties entail renovating the $250,000 boardwalk, with the smiling second lady even air-nailing down the same planks.

The work fit a narrative that Pence and Bernhardt hit on during an earlier address to Yellowstone staff: that the Trump administration is devoted to the United States’ natural resources, and dedicated to shoring up dilapidated infrastructure that’s years or even decades overdue for replacement. This “maintenance backlog” saddling the National Park Service is around $12 billion — quadruple the agency’s annual operating budget — and it’s been about stagnant for a decade despite $500 million-plus annual investments.

“Decades of inaction has gotten us to this point,” Bernhardt told the crowd, “but the Trump administration has a solution.”

The fix both the Interior secretary and Pence pitched is the Public Lands Infrastructure Fund, legislation that would siphon away 50% of oil and gas lease royalty money from the General Treasury, designating it instead specifically for federal lands infrastructure investments. The measure, introduced in March, would create a revenue stream that would be capped at $1.3 billion a year.

There was no new news revealed during the midday vice presidential visit.

Pence was in Montana the day before to talk about rural America’s methamphetamine epidemic and to fundraise, and he remarked that he “couldn’t resist” heading south for a stop at the United States’ — and world’s — first park set aside for preservation’s sake alone. The last time he passed through, he said, his children, who are now in their 20s, wouldn’t have quite reached the podium.

Pence’s message to the Park Service personnel was that he had their backs. He spoke of his admiration for Theodore Roosevelt, a champion of parks and protected public places, and tried to assure them that Donald Trump is “another conservation president.”

“These are extraordinary treasures and the life of our nation, and you are the stewards of those treasures,” Pence said. “It is my heartfelt belief that they are blessings as well.”

“My kids would tell you that I would always correct them when they’d say, ‘That’s a very beautiful scene, that’s a very pretty scene,’ ” he said. “I would say to them, ‘No, that’s a glorious scene’ … because it’s created by one to whom glory is due.”

Pence’s visit, which closed Old Faithful to the general public for six hours, kept over a hundred park workers away from their regular duties as well. One of them was longtime Yellowstone employee Paul Anderson, who has been in charge of the park’s 14 miles of boardwalk — including the famous one Pence helped replace.

Anderson, who got a shout-out from Pence, said in an interview that he has lived through VIP photo-ops before, and this one was “better than I thought it would be.”

“He seemed like he was very sincere,” Anderson said. “I heard yesterday that he had been talking about this for two weeks and said, ‘I want to actually use the air-nailer, I want to use the hammer.’ So that was cool.”

The Yellowstone veteran, who’s soon retiring, was more skeptical of some of the political proclamations and rhetoric. Anderson said he didn’t want to “bite the hand that feeds me,” but that Pence’s likening Trump to Roosevelt was “probably pushing it.”

Maybe one of the problems is that it is costing $250,000 for this project. I'm guessing it would be about half that with a private contractor. Love Mike Pence and his wife Karen; real people.

Do you have the specs or the RFP to base your guess on? On what basis do you know that Pence and his wife are "real people" (not sure what determines that)? As a bribe to the public, they are PROPOSING to sifon 50% of the lease fees (for below-market rates) back to the parks. Believe it when you see it.

Mike Pence.... And people thought the sulfur of Yellowstone smelt bad. As Plastic and artificial as the composite planks/trex he was pretending to work with. Get out of Wyoming Mr. "Vice President" and take that stink back to Washington with you!