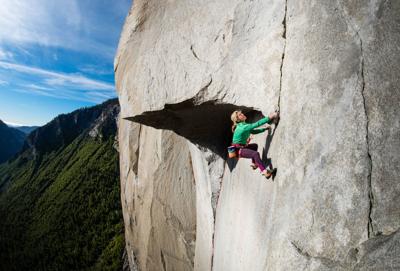 When she began rock climbing with the Stonemasters, a gang of dirtbag trailblazers in Yosemite National Park, Lynn Hill was even more of an oddity than the rest of those counterculture icons.

She was a woman in what was then a climbing scene long dominated by men. She was neither the first of her sex to pursue the sport nor the only one doing so at the time. But Hill did do more than anyone else to close the gap in climbing ability between men and women.

Hill is best known for making the first free ascent of the Nose of El Capitan in 1993, redrawing the boundaries of vertical possibility. No one before her had scaled the daunting Yosemite big wall without using equipment to aid their progress. She did it relying only on physical ability. It was the defining climb of a generation, and arguably the most famous in history. At the summit, she famously quipped, “It goes, boys!”

Hill became a public spokesperson, arguing for gender equality in the sport. Today some of the most promising climbers of the generation — Ashima Shiraishi, Margo Hayes, Brooke Raboutou — are women.

These days Hill’s life still revolves around climbing, though in a subtler way. She has a teenage son, Owen, and spends most of her time coaching, guiding and working on side projects closer to home in Boulder, Colorado.

She hopes to release a series of climbing technique videos soon, 13 years in the making. She’s also collaborating on a documentary about her life and climbing history. The ongoing project is centered around a 2019 repeat attempt at the Nose with Nina Caprez.

Though she didn’t free climb the entire route last year, at age 59 she was still able to perform the moves on Changing Corners, the most difficult pitch. She said she may still even try to climb a separate 5.14b, which would be her biggest challenge yet for sheer difficulty.

“I don’t know if that’s still a possibility in my current state, but I suppose if I found the right one and worked it out I could do it,” she said. “It would be cool to express that just because you’re older doesn’t mean you can’t be in good shape.”

Such stereotypes have never held her back before.

At 7 p.m. Tuesday at the Center for the Arts, Hill will discuss her 40-plus year climbing career and the history of the sport she helped to shape as the keynote speaker for Teton County Library’s Mountain Story series.

Tickets to her free talk have all been claimed, but for those who were unable to get one, a standby line for any unclaimed seats will be available near the ticket windows beginning at 6:45 p.m.

The Jackson Hole News&Guide spoke with Hill over the phone ahead of her visit and compiled her answers in a Q&A, which can be read online at JHNewsAndGuide.com/scene/.

Free; tickets are no longer available

Join the waitlist at TinyURL.com/lynnhilljhtix