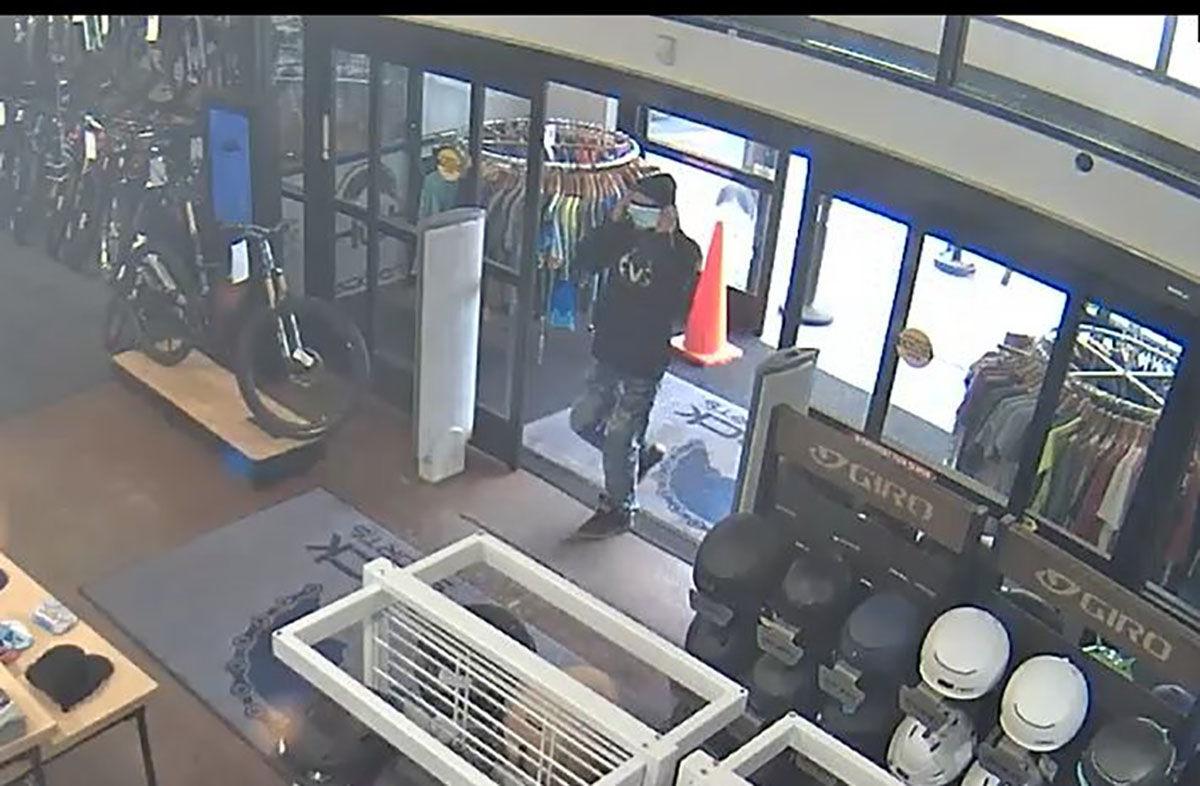 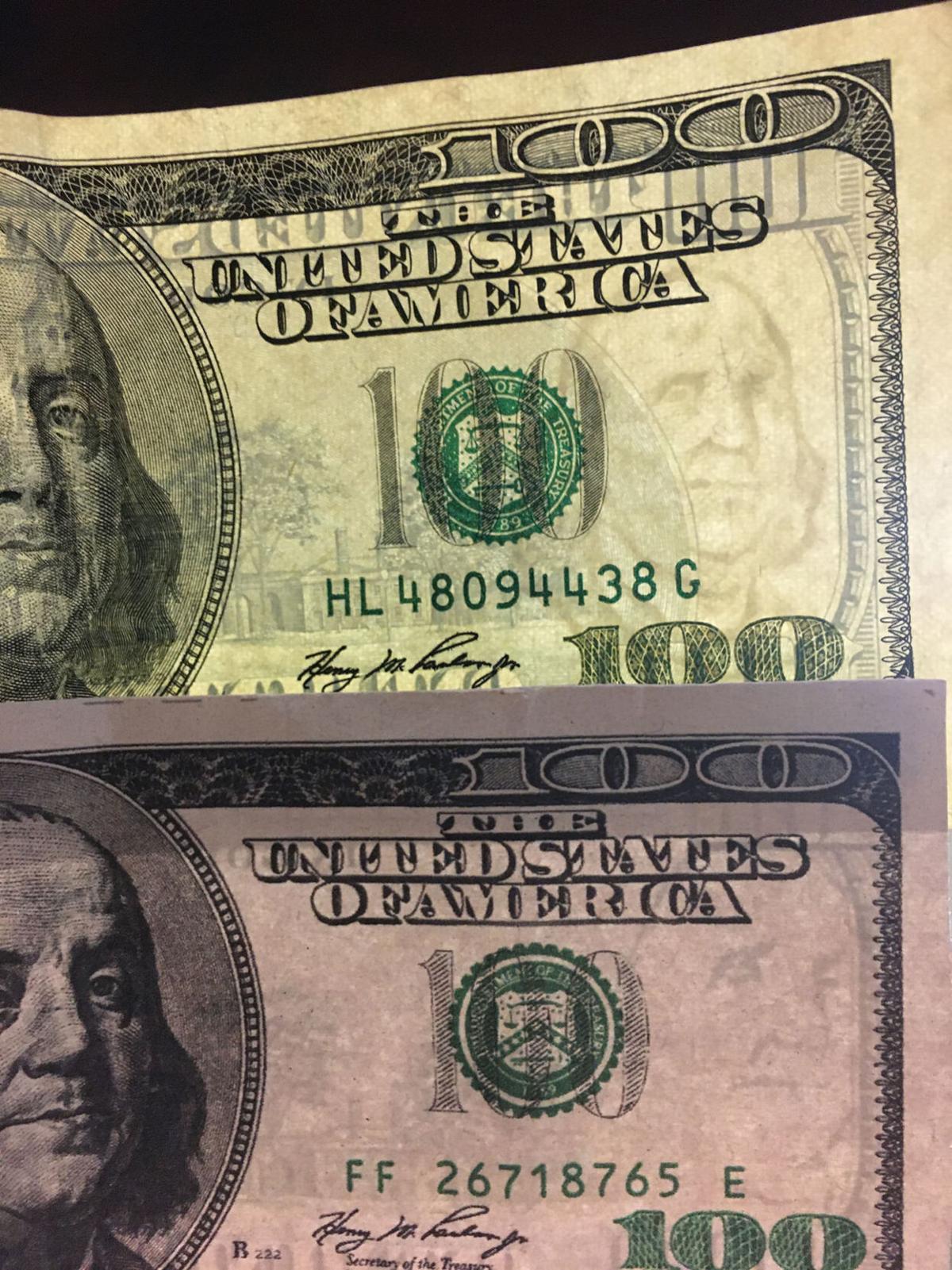 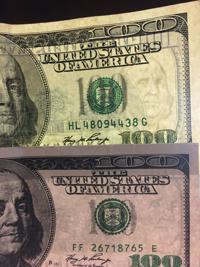 A real $100 bill, top, and a fake $100 bill, bottom, that were recently passed at Wyoming Camera Outfitters and Hoback Sports. 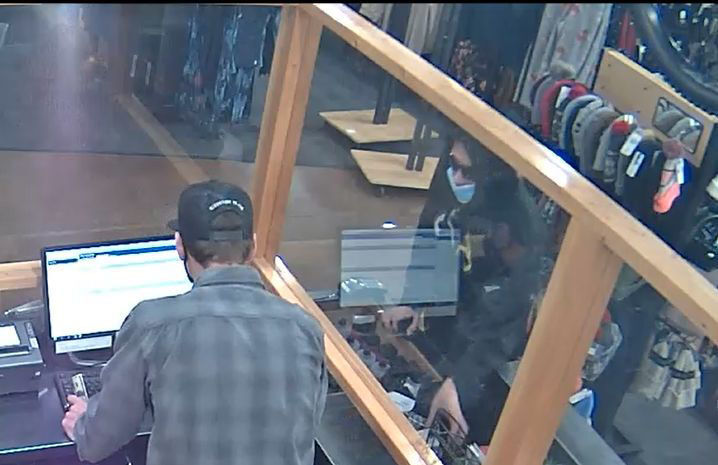 A real $100 bill, top, and a fake $100 bill, bottom, that were recently passed at Wyoming Camera Outfitters and Hoback Sports.

Detectives are looking for a man they believe is passing fake $100 bills at Jackson stores.

On Monday, the Jackson Police Department released surveillance photos of a suspect they said has used fake money at Hoback Sports and Wyoming Camera Outfitters.

At the camera shop, the man reportedly bought $116 photography gloves. He passed a fake $100 bill and a real $20 bill, Sgt. Russ Ruschill said. The purchase was on Oct. 25, but the fake bill wasn’t caught until it was taken to Wells Fargo.

At Hoback Sports on Nov. 6, the man used a another fake $100 to buy two buffs, police said. The cashier didn’t realize the bill was fake until after the suspect left the store. In surveillance footage from that purchase, the man is wearing a Realtree hoodie with a white skull on the front, faded jeans with holes in them, sunglasses and a blue surgical mask.

Police believe it’s the same suspect who used fake bills at both stores because the bills are similar.

“I compared the two bills and found that the counterfeit had all the same characteristics as the counterfeit bill from case #2011-0686, namely: same 2006 series bill, thicker, heavier paper, darker discolored ink, smaller than a real bill, non-shimmery green ink,” Officer Thomas Raab wrote in his report.

He also noted the bills had a “distorted, cartoony watermark.”

Ruschill said it’s a reminder for retail employees to pay attention to the cash they accept from customers. He said some counterfeit bills are realistic, but these aren’t.

“They look almost as bad as a photo copy,” Ruschill said. “The ink is darker, and the bill is smaller in size than a real one.”

Ruschill said cashiers can research online how to tell the difference if they haven’t already been trained on the $100 bill’s security features, such as a watermark and security thread.

A $100 bill also has a 3-D security ribbon and a color-shifting bell in the picture of an inkwell, according to the Federal Reserve’s U.S. Currency Education Program, which is available at USCurrency.gov. Businesses can also obtain markers from banks that will turn a certain color if a bill is counterfeit, though the Fed warns that the pens aren’t always accurate.

If employees believe they have received a counterfeit bill from a customer, Ruschill said, they should follow their manager’s protocols.

If a store has a no-confrontation rule, employees should attempt to get a good look at the suspect. And if it’s safe, they should try to see what vehicle the suspect leaves in so that information can be provided to law enforcement.

If anyone recognizes the suspect in the security camera images — attached to the online version of this article at jhnewsandguide.com — they should contact the Jackson Police Department at (307) 733-2331.