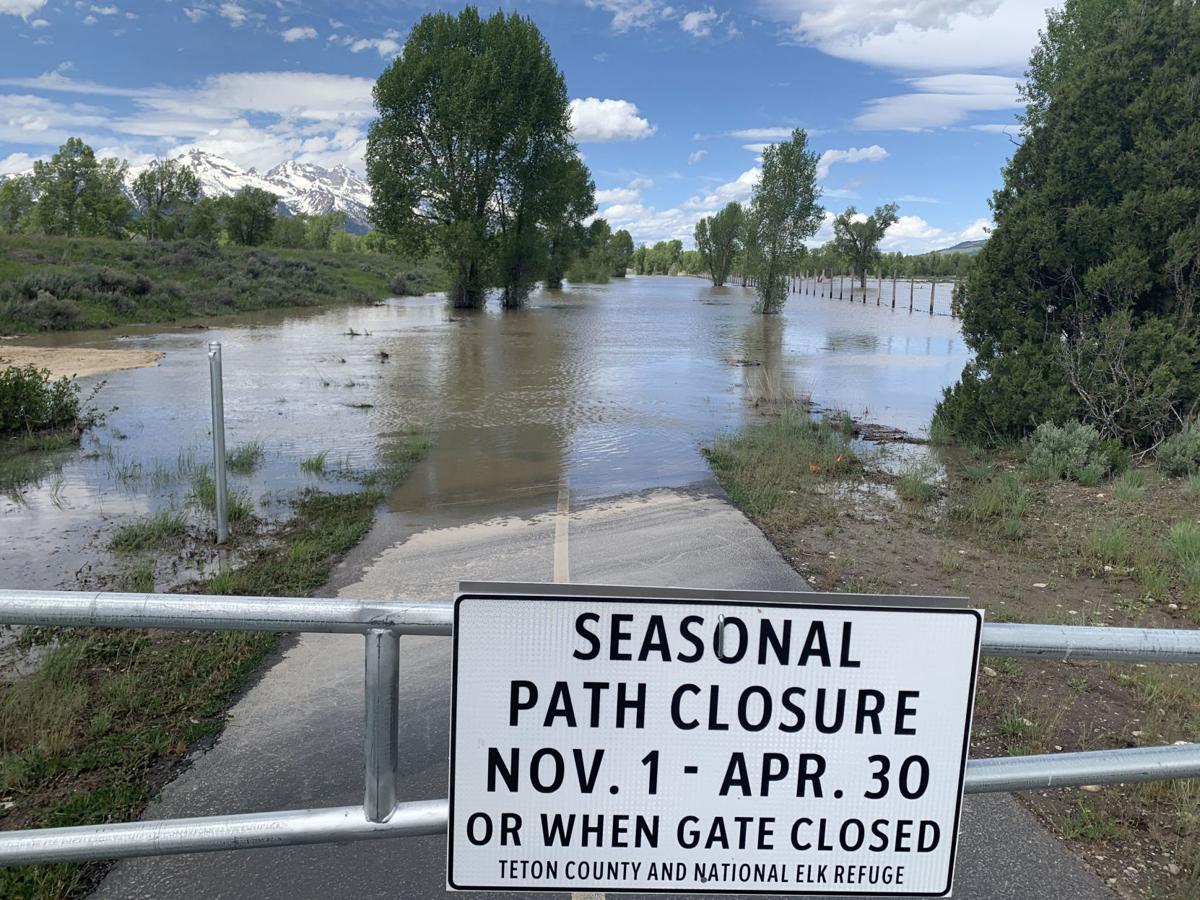 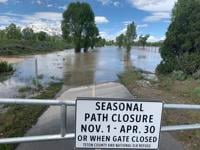 Flooding continues Tuesday along the Highway 89 pathway south of the Gros Ventre River. About 400 yards is inundated. 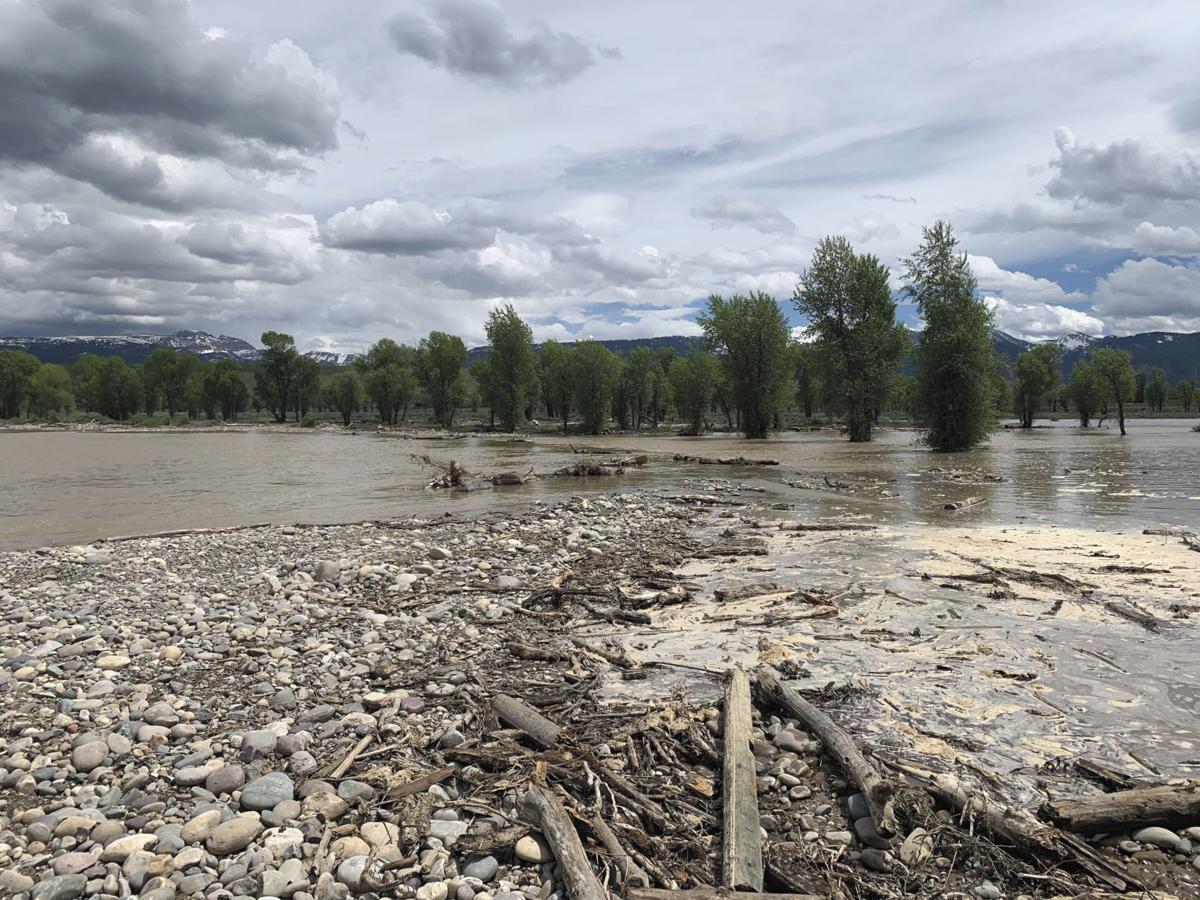 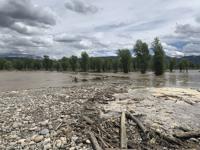 Water floods south of the Gros Ventre River Tuesday, covering the multi-use pathway that runs parallel to Highway 89 between Jackson and Grand Teton National Park. Work was done last fall to try to prevent the river from meandering south and eroding bridge abutments.

Flooding continues Tuesday along the Highway 89 pathway south of the Gros Ventre River. About 400 yards is inundated.

Water floods south of the Gros Ventre River Tuesday, covering the multi-use pathway that runs parallel to Highway 89 between Jackson and Grand Teton National Park. Work was done last fall to try to prevent the river from meandering south and eroding bridge abutments.

When Tim Mayo cruised over the Gros Ventre River bridge on Tuesday morning, he was surprised to see that the churning, muddied waters below had overtaken a just-built embankment and inundated hundreds of yards of the pathway along the highway.

Hadn’t the government, the longtime resident thought to himself, just spent hundreds of thousands of dollars fixing this situation? Boondoggle, he suspected.

“It’s unbelievable to me that they truly did all that work and made no attempt” to address flooding, Mayo said. “It’s actually much worse, the flooding, than it was before.”

“We knew ahead of time that there was still a distinct possibility that the river can, and would, overtop the banks,” Teton County pathways and trails coordinator Brian Schilling said. “The purpose of it wasn’t to protect the pathway from flooding.”

The intention, rather, was to protect the Gros Ventre River bridge and its abutments from a stream that’s wanting to migrate south but must be held in place because of the bridge location, he said.

On Monday, the Gros Ventre hit its highest flow to date this runoff season — nearly 4,000 cubic feet per second at the Kelly gauge — and it crested the new embankment. About 400 yards of the pathway disappeared under the water, which spilled onto the refuge and, via culverts, onto Grand Teton National Park land across the highway.

It’s tough to say if pathway flooding along the Gros Ventre River will continue to be the norm come high water, but there are indications this year is the exception. The historical average peak flow, which falls on June 7, is 2,260 cfs — which means the crest on Monday exceeded the mean by 70%.

Late Sunday evening, when the river ran as high as 3,500 cfs, the flows had not yet overtaken the structure, Jackson Hole News&Guide editor Johanna Love observed.

Schilling said the new $440,000 structure, which uses a mix of rootwads and riprap, is doing its job.

“If the bridge is damaged and washes away, that would be a problem,” he said. “But the purpose of this project is to protect the bridge and the bridge abutments.”

Although inundated, the pathway shouldn’t be much worse for the wear once the floodwater retreats.

“It has not caused substantial erosion in the past,” Schilling said, “because it’s essentially just standing water.”

Pathways crews will go sweep off the sediment, he said, and then cyclists and pedestrians will be good to go.

I don't believe you can mitigate snow melt in such a manner as to control it's natural desire to flow downhill. The river beds are never a "fixed border" for exceptional volume.

Not something I would spend too much time or energy (or dollars) trying to mitigate.

Every once in a while I am overcome with the senseless waste of our tax dollars and just can't help point out the insanity. At the Gros Ventre River we now have a half million dollar river stabilization project said to keep the river from migrating south which encourages the flood waters south, we have a Gros Ventre bike path bridge that was built eight feet higher than engineered (opps) which destroys the up river view and we have a Gros Ventre Jct round-about which is the most effective truck stop in Teton County.

IT'S TIME TO ALLOW THE RIVERS TO FLOOD ANNUALLY AS THEY DID BEFORE WE HUMANS INTERVENED! NEW BRIDGE OVER THE ENTIRE FLOOD PLAIN NEEDED.

Anybody care to weigh in on (a) what a new bridge would cost to construct, and (b) how much economic activity would be lost by forcing all the traffic into town to go via Spring Gulch Road. And yet, there are people who are supporting $7m to build Tribal Trails Connector, and object to fortifying the bridge foundations. As to senseless waste of tax dollars, perhaps we could look at the elephant(s) in the room?