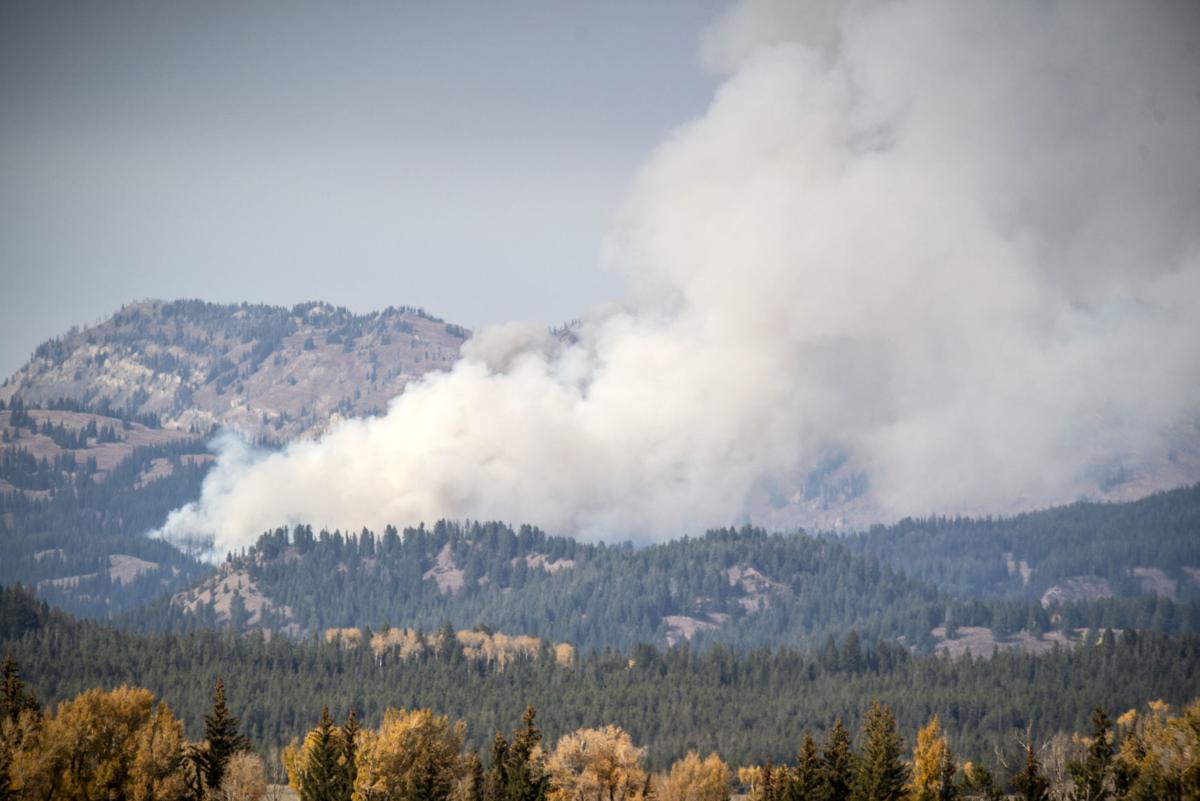 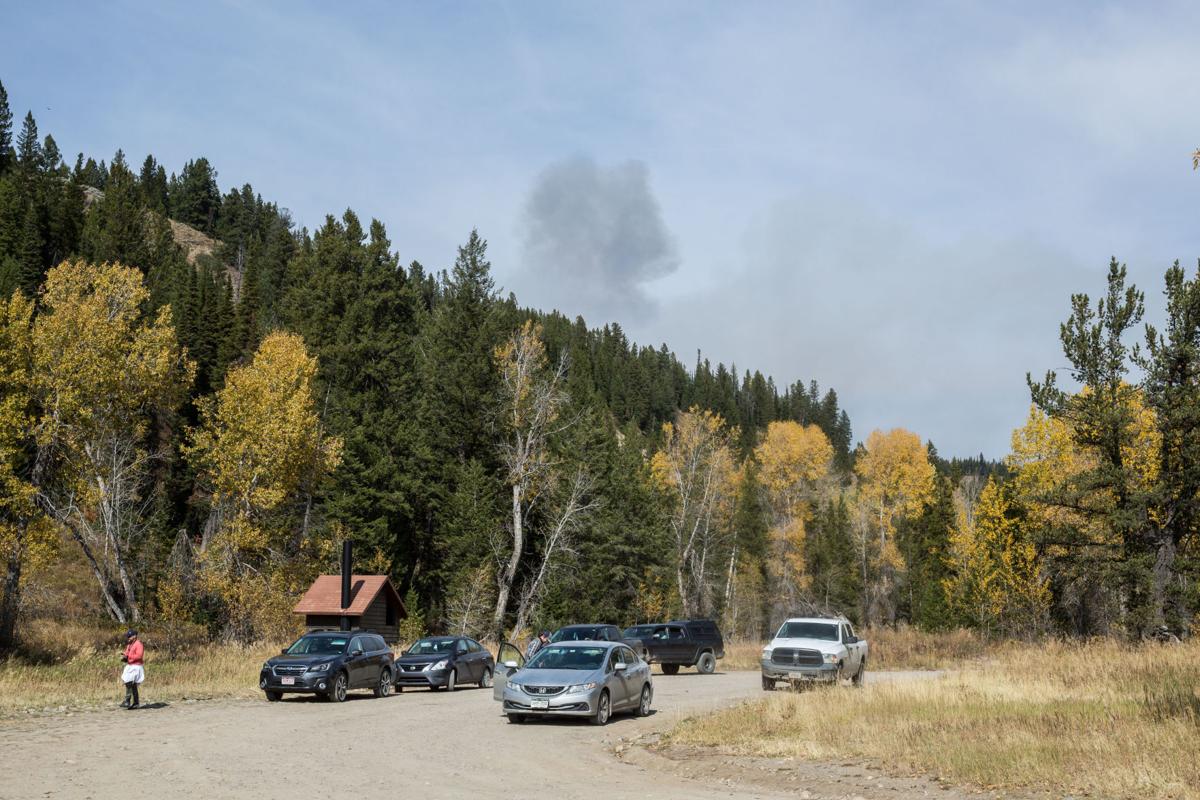 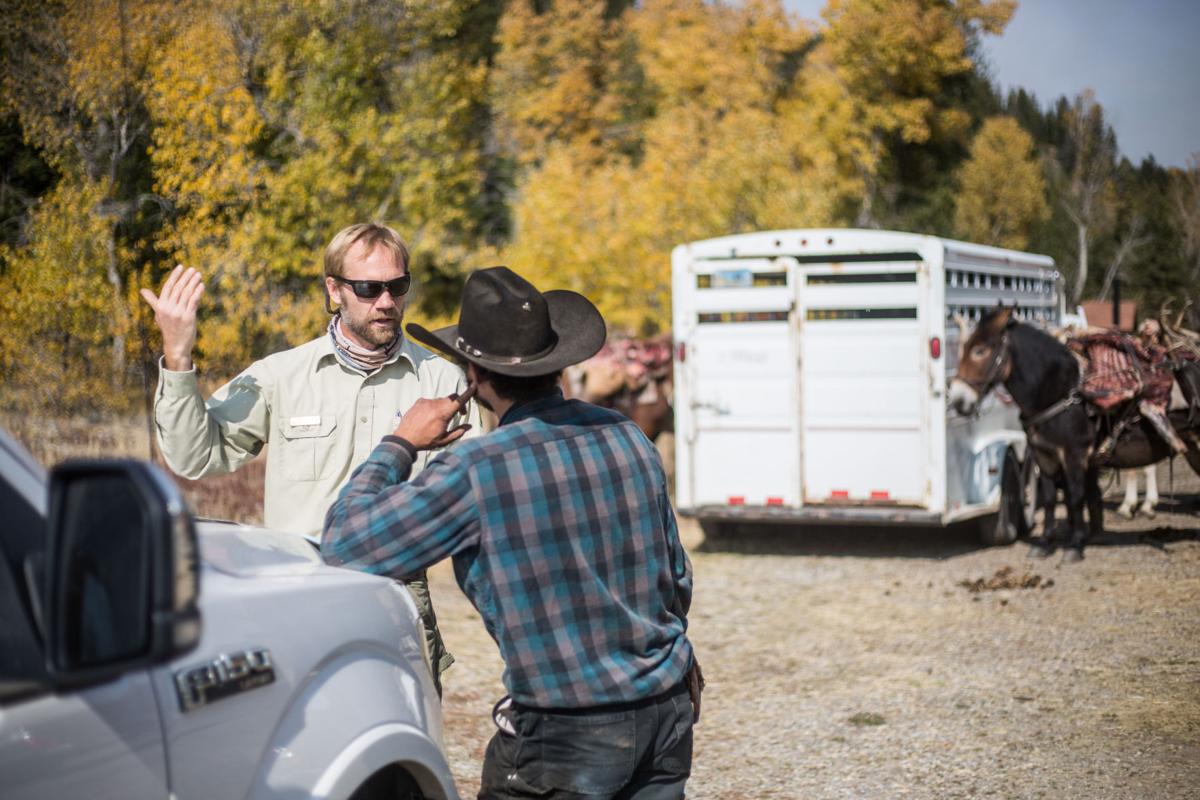 Blackrock District Ranger Todd Stiles speaks with a hunting outfitter Thursday afternoon at the Pilgrim Creek trailhead, where fire crews responded to an active wildfire that was discovered Wednesday, September 30.

Blackrock District Ranger Todd Stiles speaks with a hunting outfitter Thursday afternoon at the Pilgrim Creek trailhead, where fire crews responded to an active wildfire that was discovered Wednesday, September 30.

While throwing up a smoke column visible from much of Grand Teton National Park, the Pilgrim Creek Fire picked up enough steam Thursday that wildland firefighters were told to retreat.

“It’s up to 10 acres and growing, so they had to back out,” Bridger-Teton National Forest spokesman Evan Guzik said in the late afternoon. “They’ll try to reengage when the opportunity to reengage arises and the weather allows.”

At the Pilgrim Creek trailhead, Blackrock District Ranger Todd Stiles was preparing to hike in and brief elk hunting outfitters about the forest’s response to the fire. He didn’t need to, it turned out, because while Stiles readied at his truck a string of pack animals appeared at the parking lot, hauling out two bull elk and some hunters.

“What our modeling is showing is that it’s kind of staying up on that face,” Stiles hollered to the guide, “but why don’t I just show you on a map — that way you guys are safe.”

Although by far the largest, the Pilgrim Creek Fire wasn’t the only wildfire that Bridger-Teton firefighters responded to on Thursday. One day after five abandoned illegal warming fires turned into small wildfires south of Jackson, there was an all-out scramble to respond to six additional fires.

Of the small fires discovered Monday and Tuesday, all had characteristics that were telling of hunter warming fires: They were located in the backcountry, and in places that offered views of adjacent ridgelines or basins that might hold elk and mule deer. Several of the blazes had fire rings within the scar they left behind.

Of the 11 new fires detected this week, just two were located in places where lightning has struck in the last couple weeks. The rest — located in the Snake River, Wyoming and Salt River ranges — appeared to have been caused by hunter and recreationists’ warming fires.

“We haven’t had any lightning in a couple weeks, and how else can a fire start?” Norman said. “They all are very suspicious, whether they’re from warming fires or campfires.”

Notably, campfires outside of designated sites are currently illegal in the places where wildfires have started save for the Pilgrim Creek Fire (the Teton and Gros Ventre wilderness areas are exempted from a fire ban). But even in places where fires are allowed, it’s illegal to abandon them, Norman pointed out.

Norman said he was “surprised” by the sheer volume of illegal, abandoned campfires that have run out their rings and turned into wildfires.

“I’m not an expert on human nature, but we do have a problem with enforcement and getting people to follow restrictions,” he said. “We can only enforce so much, and we only have so many people.”

There’s also a finite quantity of local firefighting personnel and resources available when one fire after the next pops up. Because of the sudden human-caused rash of fires, three helicopters, a 20-person crew and engine from Idaho Falls have all been brought in to assist, Norman said.

Most of the fires have stayed small, and that’s one silver lining of humans repeatedly setting the forest ablaze through negligence and disregard for the regulations. When Guzik spoke with the Jackson Hole Daily, the Mill Hollow and and Salt River fires were both classified as three-tenths of an acre. The Spring Creek and Poker Hollow fires were two-tenths of an acre, and the Sherman fire was considered just one-tenth acre.

Of the five wildfires responded to on Monday and Tuesday, three are out: the Willow Creek, Dry Wash and Wolf fires. The Kerr Fire and Dog Fire are considered contained, but not yet out, Guzik said.

Another upside to having a spate of fires on the landscape is that they occurred at the tail end of the conventional wildfire season in Northwest Wyoming and are a snowstorm away from being snuffed out. Still, looking at the forecast, Norman does not foresee any near-term relief.

“Right now there’s no significant season-ending event in the next 7 to 10 days that we’re looking at,” he said. “That’s a long ways out to hang your hat on.”