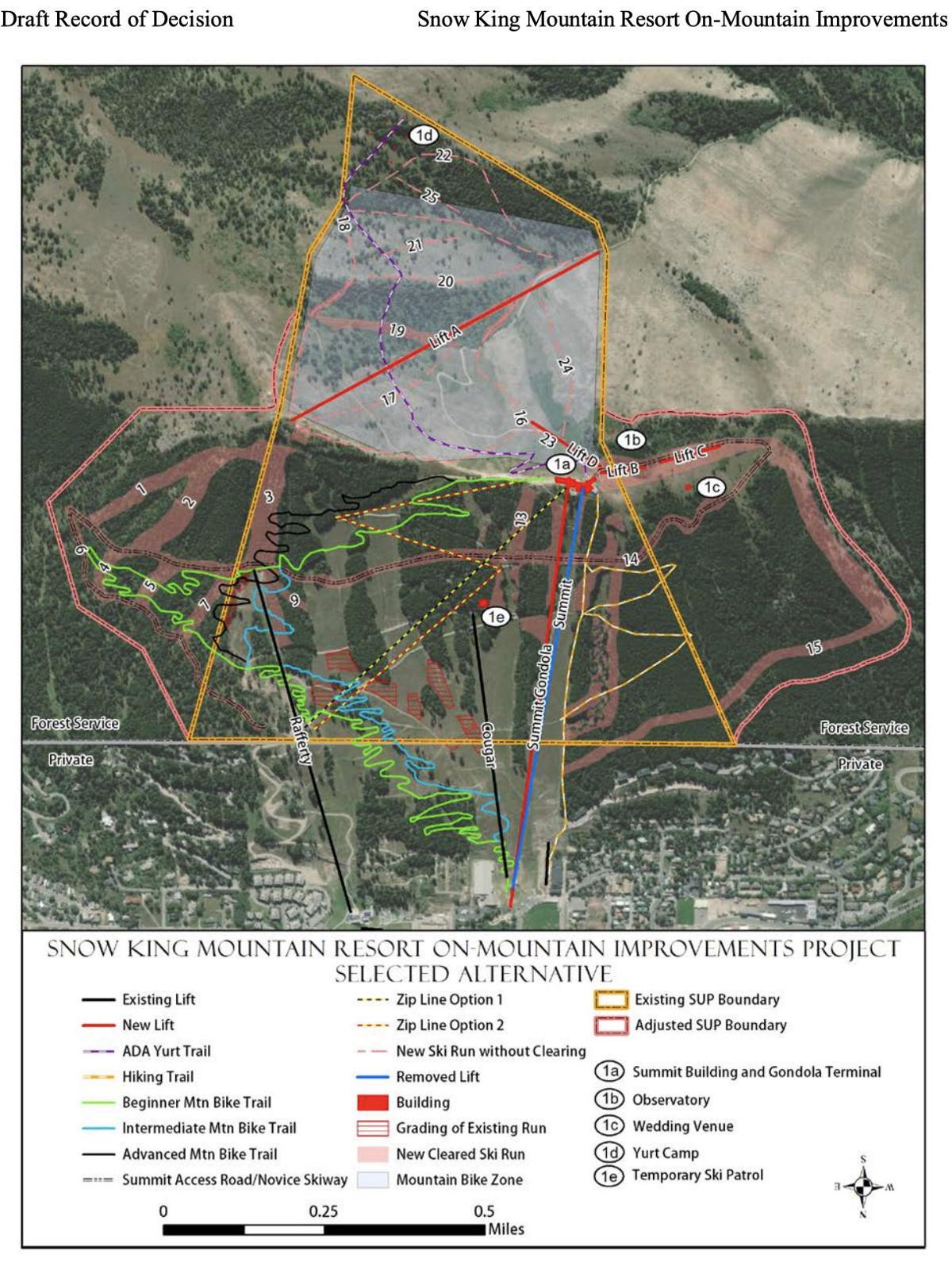 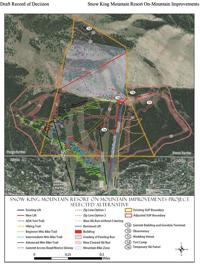 Left: This Forest Service schematic illustrates the different parts of Snow King Mountain Resort’s expansion and renovation plans that are being carried forward by the Bridger-Teton National Forest. 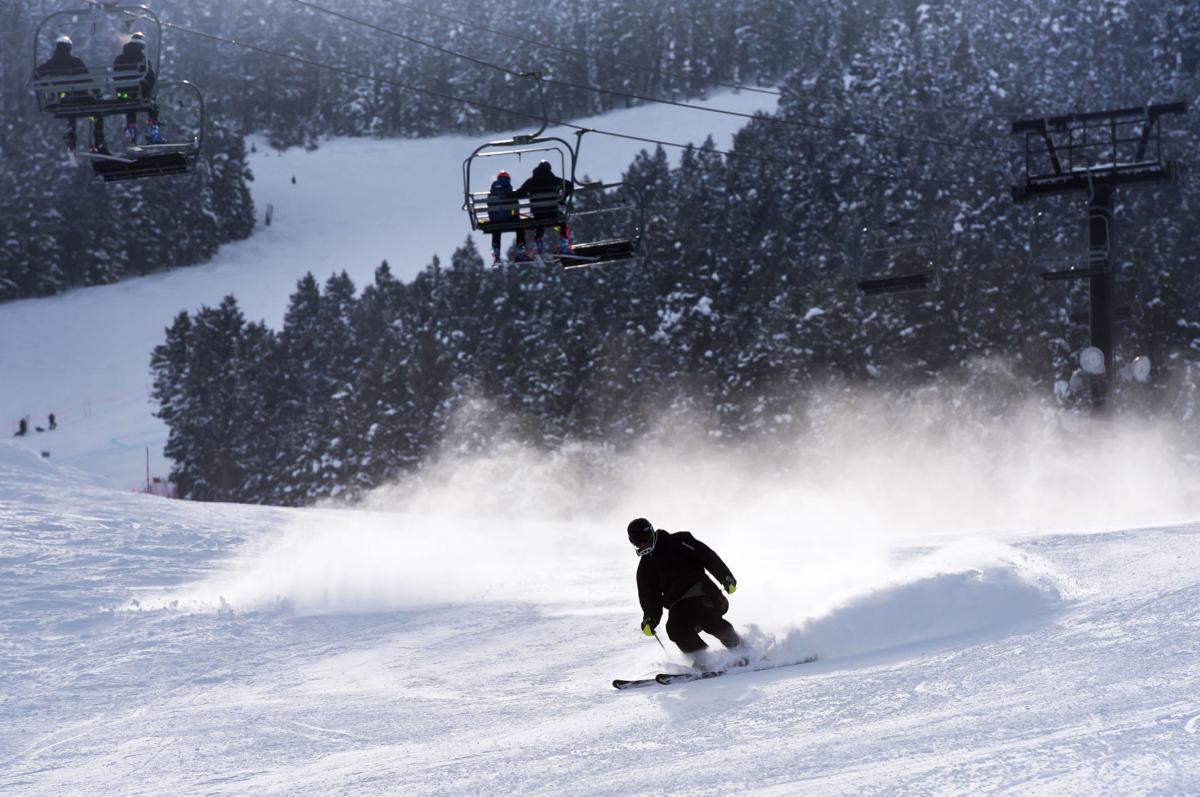 A Snow King skier leaves a frosty cloud of chunky snow in February 2019. With the release of the Bridger-Teton National Forest's draft decision Friday, the ski resort is one step closer to realizing its expansion and renovation plans.

Left: This Forest Service schematic illustrates the different parts of Snow King Mountain Resort’s expansion and renovation plans that are being carried forward by the Bridger-Teton National Forest.

A Snow King skier leaves a frosty cloud of chunky snow in February 2019. With the release of the Bridger-Teton National Forest's draft decision Friday, the ski resort is one step closer to realizing its expansion and renovation plans.

The Bridger-Teton National Forest is moving forward with a plan for Snow King Mountain that allows the ski resort’s infrastructure to spread out in three directions: to the east, west and over the backside into Leeks Canyon.

Snow King Mountain Resort had requested all of those expansion areas, which include two boundary adjustments, and all were part of a draft decision released Friday morning by the Bridger-Teton.

Other elements of Snow King’s plans that moved forward as part of a “preferred alternative” in the forest’s final environmental impact statement include new ski runs, a longer and wider summit access road, summit restaurant, a zip line, mountain bike trails, magic carpet conveyers, a backside ski lift and a gondola to replace the Summit Lift.

Almost everything that Snow King Mountain Resort asked for going into the federal planning process in 2018 has held up so far, which pleased Ryan Stanley, the ski area’s general manager.

“I thought it was really positive and exciting,” Stanley told the Jackson Hole Daily on Friday. “That’s my first impression.”

Jeff Golightly, an executive for primary Snow King owner Max Chapman, said he sees the ski resort’s anticipated renovation and expansion as 90% of the way to the finish line.

“We’re going to be able to invest and keep the Town Hill alive,” Golightly said.

Snow King representatives and investors have long argued that they need the full suite of changes they’ve proposed to turn the ski area into a profitable venture. The business community and ski organizations have generally supported the ski area’s plans, but a large portion of the community had spoken up asking for a scaled-back version of the historic ski area’s overhaul.

The national forest, Golightly perceived, did a “good job” balancing the concerns of the community with Snow King’s desires, although that viewpoint is already being contested by groups that asked for more substantive changes to the development plans.

“It seems clear that the whole thing has been driven by the proponent from the beginning,” Jackson Hole Conservation Alliance Executive Director Skye Schell said, “and the Forest Service was never seriously interested in balancing what the developer said they needed with the wildlife protection that so much of our community was asking for.”

Concerns about impacts to historic resources and wildlife like goshawks and wintering ungulates did lead to “conditions” in the Bridger-Teton’s draft decision, but they did not upend any of the ski areas plans.

For example, because of goshawks, which are a “sensitive species” for the state of Wyoming and the Bridger-Teton, Snow King will be barred from cutting down any nesting trees used by the raptors while building mountain bike trails in the tentatively approved eastern expansion. The resort also won’t be able to glade islands of forest that remain between newly cut ski runs in the expansion area.

But in the end, the most productive known goshawk pair in Jackson Hole would have its primary territory carved up and filled with more infrastructure and use under the Bridger-Teton’s draft decision.

In conjunction with the 32-page decision document, the Bridger-Teton also issued a 293-page final environmental impact statement and a 165-page “response to comments documents.” All those documents, which are posted alongside this story at JHNewsAndGuide.com, lay out what Snow King will be allowed to do in detail — and their potential impacts.

Although the documents released Friday constitute a “decision,” that decision is a draft, and an objection process lies ahead. Objections are due by Nov. 23.

The forthcoming objection process, which is relatively new to the Forest Service, is intended to avert litigation by striking compromises between parties that commented on the draft plans but don’t like what they see in the final.

Bridger-Teton Supervisor Tricia O’Connor anticipates that the objection meetings will be held in January. It’s likely they’ll be virtual, although it will depend on the status of COVID-19 when those meetings are happening, she said.

Snow King will be releasing a press release next week announcing what it intends to start building first.

“We’re hoping to be making a number of significant improvements next summer,” Stanley said. “That’s our general goal.” 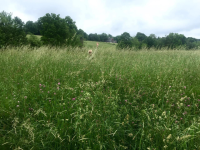 If only it was about the locals. It's not, however.

This is a great leap forward. To be applauded. There is so much wilderness, forest, territory, etc. surrounding Jackson and the Hole, that to develop a pea pod of a mountain, albeit a beautiful back yard mountain, right there, in town, is inconsequential on any knee jerk resistance-to-development level, and a great, healthy, wonderful outdoor phenom for everybody living in and visiting Jackson. Keep it local. Bravo!