An aerial photo of land the proposed Tribal Trail Connector would occupy. The stakeholder group advanced two options for the controversial project Wednesday. Commissioners will likely discuss them in an April 6 workshop. 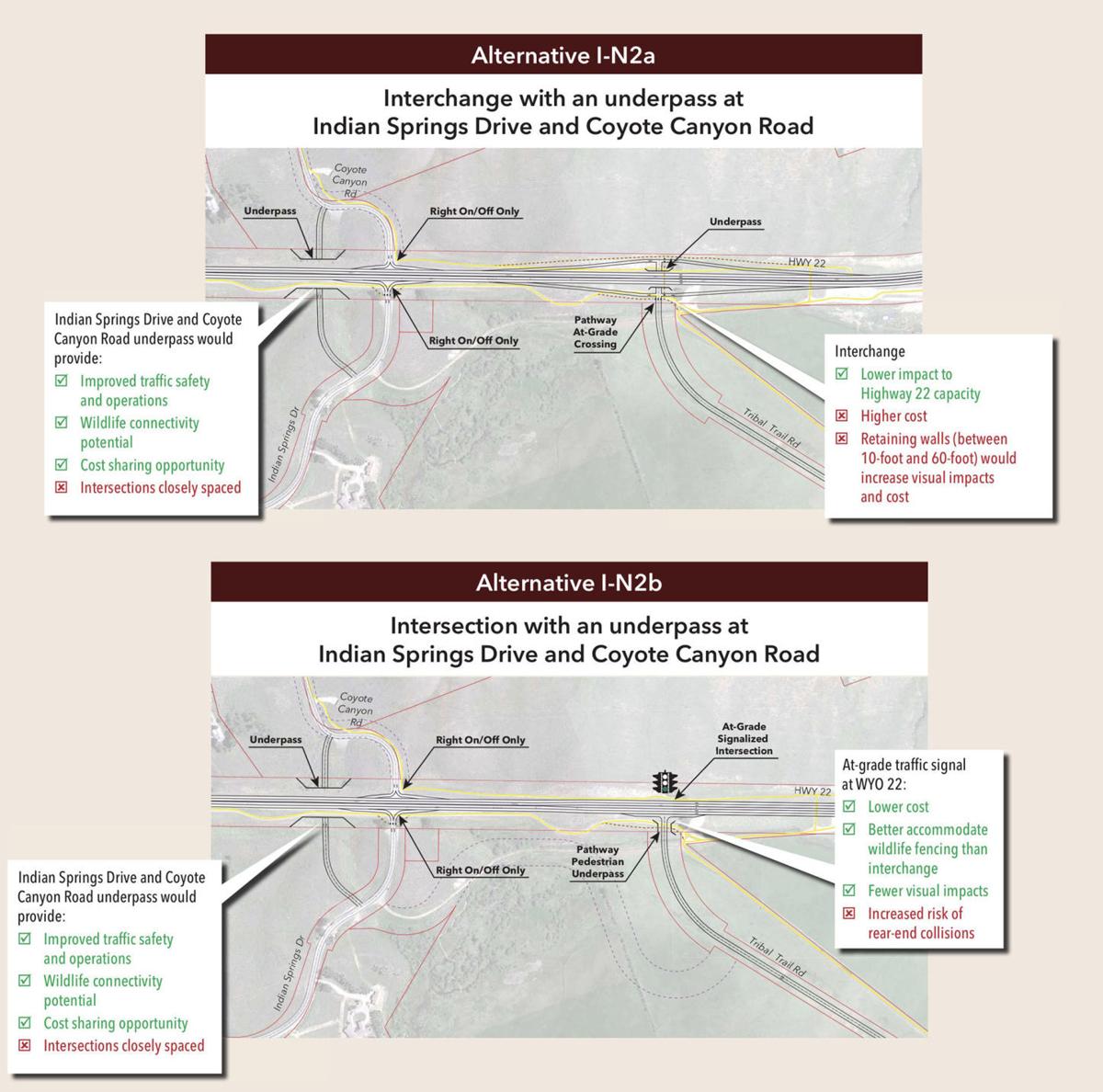 Alternatives I-N2a and I-N2b moved forward as options for the reconfiguration of Highway 22 at Coyote Canyon Road/Indian Springs Drive and the future Tribal Trail Connector.

After months of deliberation — and disagreement among the public and stakeholders — two similar options for the Tribal Trail Connector may be headed to county commissioners for review.

“I really am pleased,” former mayor and facilitator Sara Flitner said Wednesday, wrapping up the final stakeholder meeting. “There’s a lot of consensus.”

The decision was preceded by months of deliberation and public meetings, as well as debate among the public and stakeholders about whether the connector, which has been considered since the 1980s, was appropriate at all. While proponents say it would decrease traffic at the Y intersection and increase redundancy for emergency personnel, others have decried the project, asking whether moving ahead with the connector now, or at all, is appropriate.

Dubbed I-N2a and I-N2b, the two alternatives that stakeholders coalesced around Wednesday for the controversial connector road are similar. They differ in how they would handle the intersection of the Tribal Trail Connector with Highway 22.

The two may not be presented to the Teton County Board of County Commissioners as a package in a workshop set for April 6. Director of Public Works Heather Overholser said staffers still need to work through their notes and determine what best represents stakeholders’ opinions.

“Most people felt that either 2a or 2b were the best option with pros and cons to each,” she said, noting that she’s still working to figure out what will end up in the commissioners’ staff report.

Both alternatives would see modifications to the intersection of Highway 22, Indian Springs Drive and Coyote Canyon Road. The changes would make entry to and exit from either road accessible only by right-hand turn. They would also see the Wyoming Department of Transportation and the county connect Indian Springs and Coyote Canyon via an underpass.

The alternatives differ at the intersection of the connector and 22. One proposes building an elevated interchange with an underpass. The other zeroes in on an at-grade intersection with a traffic light.

Stakeholders settled on those two options in a roundtable format, each giving their opinion on their preferred design. They also chimed in on a range of traffic calming measures for the connector, and potential roundabouts along the road. One traffic circle, which appeared popular, would be at the intersection of South Park Loop Road and West Boyles Hill Road.

Those proposals for the southern parts of the road will likely be included in the alternative — or alternatives — presented to the commissioners in the April workshop.

“I recorded everything the stakeholders said about the north intersection, the south intersection, speed calming, road alignment,” Overholser said. “I need to go through all of that carefully.”

The “no-build option” is also still on the table.

Commissioners will ultimately choose between that and the designs staff present when they vote on the connector. That will likely happen at the end of April or early May, depending on how much feedback the commissioners give staff in the earlier workshop.

The public and some stakeholder committee members have rallied against the connector. Reasons range from a perception that Highway 22 improvements are being done in a piecemeal fashion, to concerns about cost and plopping a paved road down on open space.

On Wednesday, however, the “no-build option” was barely discussed. Flitner said the point of the meeting was to settle on a connector design. Staff said the stakeholder process is required to deliver commissioners an alternative that includes the connector.

At the stakeholders’ last meeting, a majority presented an option that would have put the planning process for the connector on hold while plans for the rest of Highway 22 were finalized. It was ultimately dismissed because staff said it wouldn’t meet the project’s “purpose and need” and would not have presented commissioners with a connector design to consider.

Flitner, a former Jackson mayor, was hired after the disagreement to facilitate the rest of the process.

She was satisfied with the group’s performance and amiability Wednesday.

“I was really pleased with the quality of the conversation, how deeply they had studied the options, and how thoughtful they were in being fair in not only representing their own perspectives but that of the broader and wider community,” she said.

Alex Muromcew, who was one of the stakeholders who proposed the dissenting alternative, wasn’t as pleased with the outcome.

“I think the end result was kind of a foregone conclusion,” he said. “This is what the county and WYDOT wanted and this is what they got.”

Muromcew described the two alternatives as “the least worst rather than the best.”

Still, there was one thing the group all agreed on: It was nice to end an hour and a half early.

“Thank God,” Muromcew said. “I’m glad it was an efficient meeting and we got what we needed to get done done.”

Time to build this out. We elect our leaders democratically so that everything they do doesn’t have to be democratic process. Grow a set and lay down some asphalt! There is certainly not overwhelming opposition to it. That is a completely false statement. Get this done.

Show data that supports your statement about opposition, otherwise your credibility is zero, consistent with your involvement with this issue.

The outcome of this meeting (apparently its last) confirms my long standing suspicion that the entire Stakeholder Group process was window dressing to “legitimize” the BCC’s mission to impose the TTC on our community, in spite of its enormous cost ($7-9mm) and adverse impact on the environment (ruining the wetland it will cross and generating more air pollution from induced demand), and overwhelming public opposition, including most of the SHG members and residents of the neighborhoods it would serve and most “benefit”. To date no tangible economic or other benefits of this project have been presented. But about $1 million of public funds have been spent on this questionable exercise. How is this even remotely consistent with the comp plan’s mission which the commissioners are supposed to uphold?

Sure the BCC is the decision making entity. And the initiative is certainly legitimate and so to be considered. However the notion that it should be implemented simply because it has been in the ITP forever is ridiculous if it turns out to be a terrible idea and a waste of taxpayer funds, which so far is what it appears to be. As for your comment about public support, show me the data, because otherwise it is without merit. You must not attended any of the meetings with public comment over the past four years. And if there are people who “support” the project, their support is mild since none could be bothered to attend any if those meetings.