The Caribou-Targhee National Forest is starting to analyze a sweeping expansion proposal at Grand Targhee Resort that includes on-slope restaurants, a handful of new lifts and a nearly 50% increase in the 64-year-old ski area’s footprint along the west slope of the Tetons.

The proposal, to be reviewed soon, seeks to add approximately 1,200 acres to Targhee’s current 2,517-acre permit area on the forest. The new acreage is split into two similar-sized Teton Canyon expansion zones to the south and west being dubbed the “South Bowl Pod” and “Mono Trees Pod,” which together would be served by four new ski lifts and have nearly 280 acres of cleared runs.

Grand Targhee owner Geordie Gillett didn’t respond to an interview request, but the Caribou-Targhee wrote in a scoping document that the expansions and upgrades are needed to address a growing Wyoming and Idaho ski market and to keep Targhee competitive with other destination ski areas.

“These developments are in direct response to evolving consumer demands and the competitive regional and destination skier markets,” the document states.

The changes sought would increase developed ski terrain or cleared runs at Grand Targhee by 76%, from 520 acres to 915 acres.

Other elements of the plan include rebuilt and all-new lifts within the current boundary, a tubing park, guest yurt, 29 miles of new trails, 5.6 miles of new roads and a zip line, ropes course and aerial adventure course that would be located above the primary base area. Snowmaking would be expanded in a dozen areas totaling 57 acres.

Targhee also proposed a 6,000-square-foot restaurant at the summit of Fred’s Mountain just to the south of the Dreamcatcher Lift offload station. The building, according to the forest’s planning document, would have “simple, linear forms” to be less visible from Grand Teton National Park’s backcountry.

A similarly sized guest building and restaurant with a 2,000-square-foot deck would be added to the top of the Sacajawea Lift. Two warming cabins and a warming hut are also in the plans.

The last time Targhee expanded and updated its master development plans was in 1994, according to longtime Teton Basin District Ranger Jay Pence. The pieces of the plan now on the table were conceptually approved through a 2018 amendment to Grand Targhee’s master development plan that was “accepted” by the national forest, though the bulk of analysis is ahead. 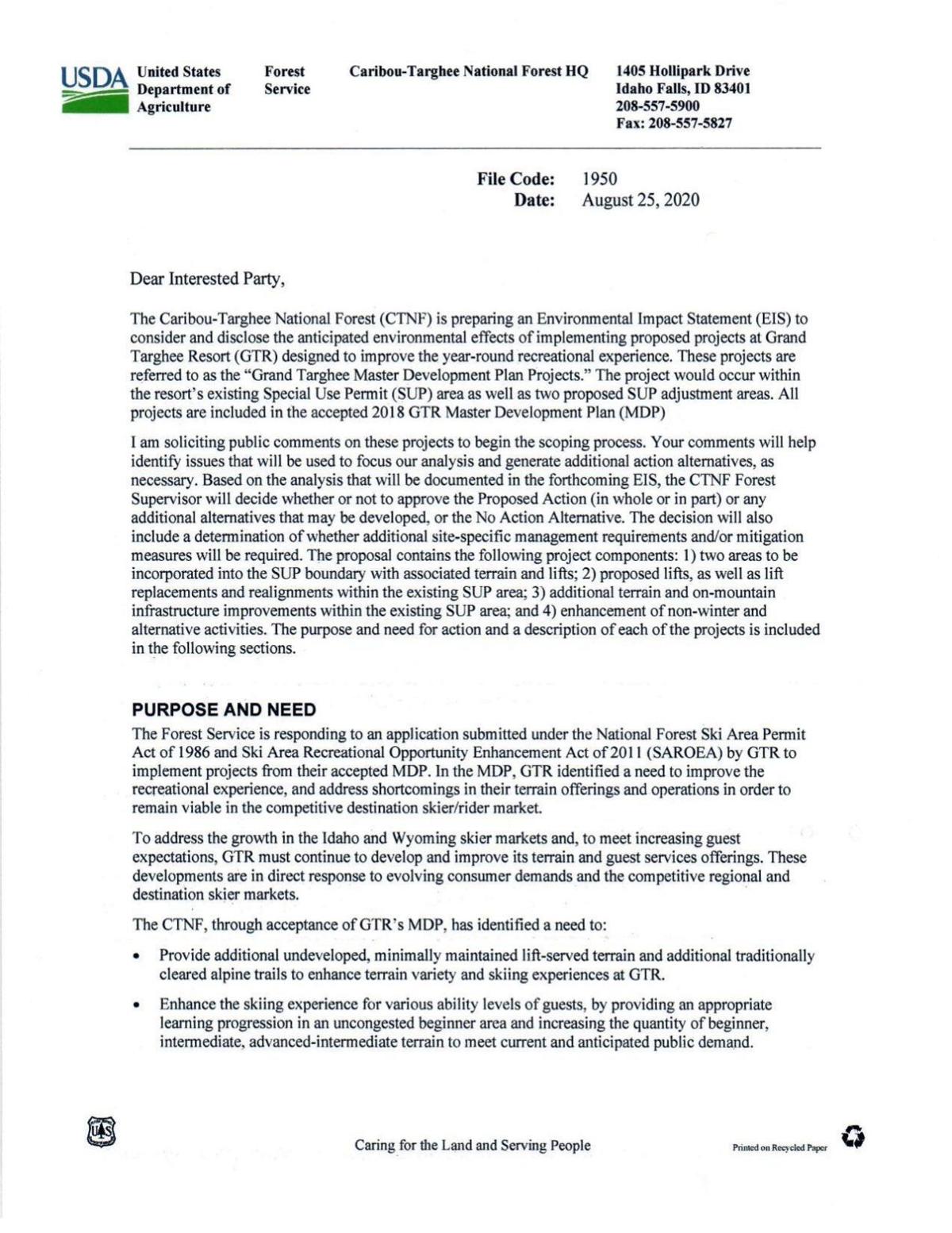 At this juncture, the forest is “scoping” the plans and giving the public 30 days to weigh in and identify issues they would like to see examined in a coming environmental impact statement.

All-goes-well target dates, Pence said, would see the release of a draft EIS by January, a final EIS and draft decision by October 2021 and a final decision by January or February 2022.

Increasing Targhee’s footprint and development area won’t be as simple as expansion plans under review at Snow King Mountain, where the nearby hillsides are already zoned in a way that authorizes ski area infrastructure.

On the Tetons’ west slope, areas where Targhee seeks to expand have a “visual quality maintenance” management emphasis and are off limits. In tandem with the environmental impact statement, the Caribou-Targhee would also have to amend its forest plan.

One Teton Valley advocacy group that intends to watchdog the forest’s planning process had not yet reviewed the documents and withheld judgment for the time being. But Shawn Hill, who directs the Valley Advocates for Responsible Development, said he will be engaging in full — and readying fellow residents to do the same.

“A lot of people know Teton Canyon really well,” Hill told the Jackson Hole Daily, “and I think people in Teton Valley are going to have some ideas about what needs to be studied in the expansion proposal.”

VARD, he said, would not oppose the expansion plans out of hand.

“If Grand Targhee makes the case that this expansion is going to be better for the environment and community, I’m all ears,” Hill said. “But we’re just going to have to see if they can make that case and make it persuasively.”