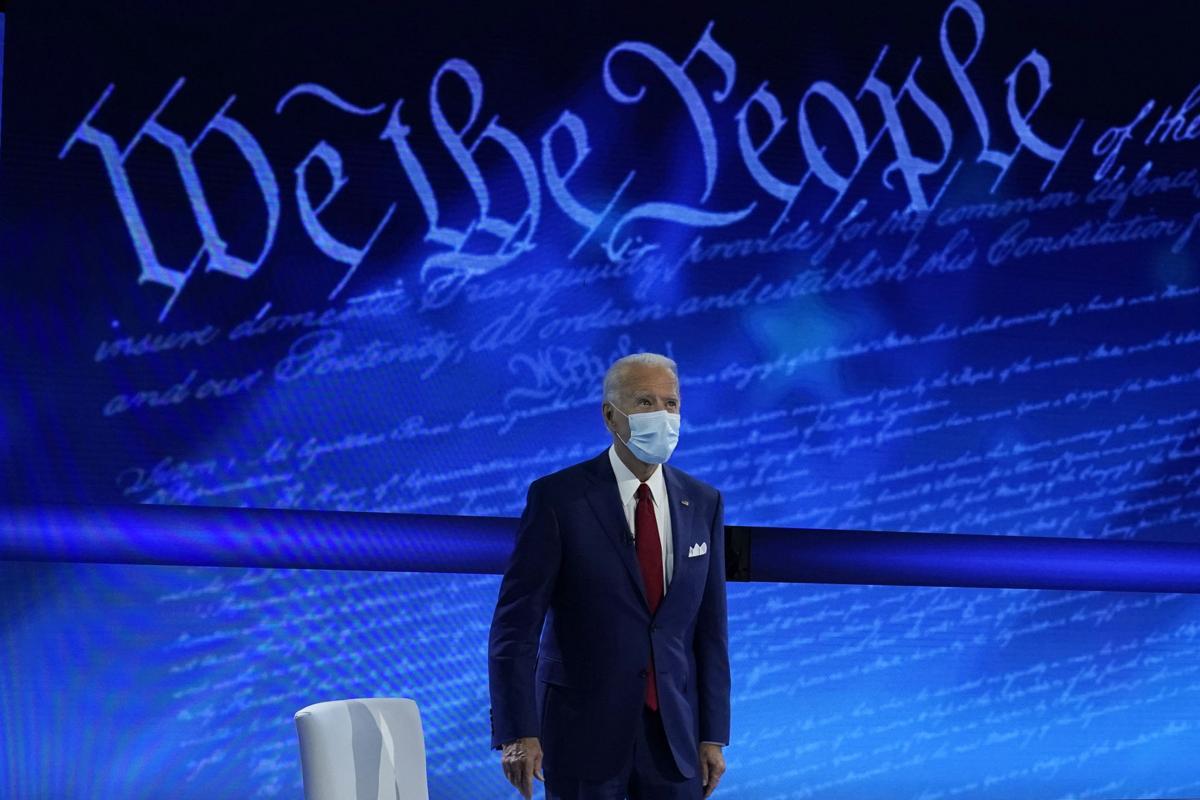 WASHINGTON (AP) — President Trump was evasive Thursday night when pressed if he took a COVID-19 test before his first debate with Democrat Joe Biden as the two men squared off again, in a way, after their scuttled second showdown was replaced by dueling televised town halls several channels apart.

Biden, appearing nearly 1,200 miles away, denounced the White House’s handling of the virus that has claimed more than 215,000 American lives, declaring that it was at fault for closing a pandemic response office established by the Obama administration. Trump, meanwhile, was defensive and insisted that the nation was turning the corner on the virus, even as his own battle with the disease took center stage.

Trump, less than two weeks after being diagnosed with COVID-19, dodged directly answering whether he took a test the day of the Sept. 29 debate, only saying “possibly I did, possibly I didn’t.” Debate rules required that each candidate, using the honor system, had tested negative prior to the Cleveland event, but Trump spoke in circles when asked when he last tested negative.

It was his positive test two days later that created Thursday’s odd spectacle, which deprived most viewers of a simultaneous look at the candidates just 19 days before Election Day. The moment seemed fitting for a race unlike any other, as yet another campaign ritual was changed by the pandemic that has rewritten the norms of society.

The presidential rivals took questions in different cities on different networks: Trump on NBC from Miami, Biden on ABC from Philadelphia. Trump backed out of plans for the presidential faceoff originally scheduled for the evening after debate organizers said it would be held virtually following Trump’s COVID-19 diagnosis.

The town halls offered a different format for the two candidates to present themselves to voters, after the pair held a chaotic and combative first debate late last month. The difference in the men’s tone was immediate and striking.

Trump was Trump. He was loud and argumentative, fighting with the host, Savannah Guthrie, refusing to condemn the QAnon conspiracy group outright, testily declaring he would denounce white supremacy but complaining about the questioning — and eventually saying for the first time that he would honor the results of a fair election, but only after casting an extraordinary amount doubt on the likeliness of fairness.

“And then they talk, ‘Will you accept a peaceful transfer,’ ” Trump said. “And the answer is, ‘Yes, I will.’ But I want it to be an honest election, and so does everybody else.”

Biden, meanwhile, took a far different, softer, approach with audience questions. The former vice president, who struggled with a stutter growing up, stuttered slightly at the start of the show and at one point squeezed his eyes shut and slowed down his response to clearly enunciate his words.

The Democratic nominee brought a small card of notes on stage and referred to it while promising to roll back tax cuts for the wealthiest Americans.

The two men are still scheduled to occupy the same space for a debate for a second and final time next week in Nashville. But the cancellation of Thursday’s debate reverberated for both campaigns.

Trump and Biden battled on Sept. 29 in Cleveland in a debate defined both by the president’s constant hectoring of his opponent, which sent his support lower, and by its place on the calendar: just two days before Trump announced he had tested positive for coronavirus.

Trump was hospitalized for three days, and while he later convalesced at the White House, the debate commission moved to make their second debate remote — which the president immediately rejected.

Earlier Thursday, Trump appeared at a rally in North Carolina, underscoring the challenge confronting him in the final weeks as multiple polls have shown him trailing Biden nationally and in many swing states. Trump has spent much of the week on the defense, campaigning in states he won in 2016, such as North Carolina and Iowa.

But despite the polling, Trump predicted a “big, beautiful red wave” on Election Night, before referencing another one of his major challenges: A cash disadvantage to the Biden campaign, which just announced raising a record-breaking $383 million in September.

Copyright 2020 The Associated Press. All rights reserved. This material may not be published, broadcast, rewritten or redistributed without permission.