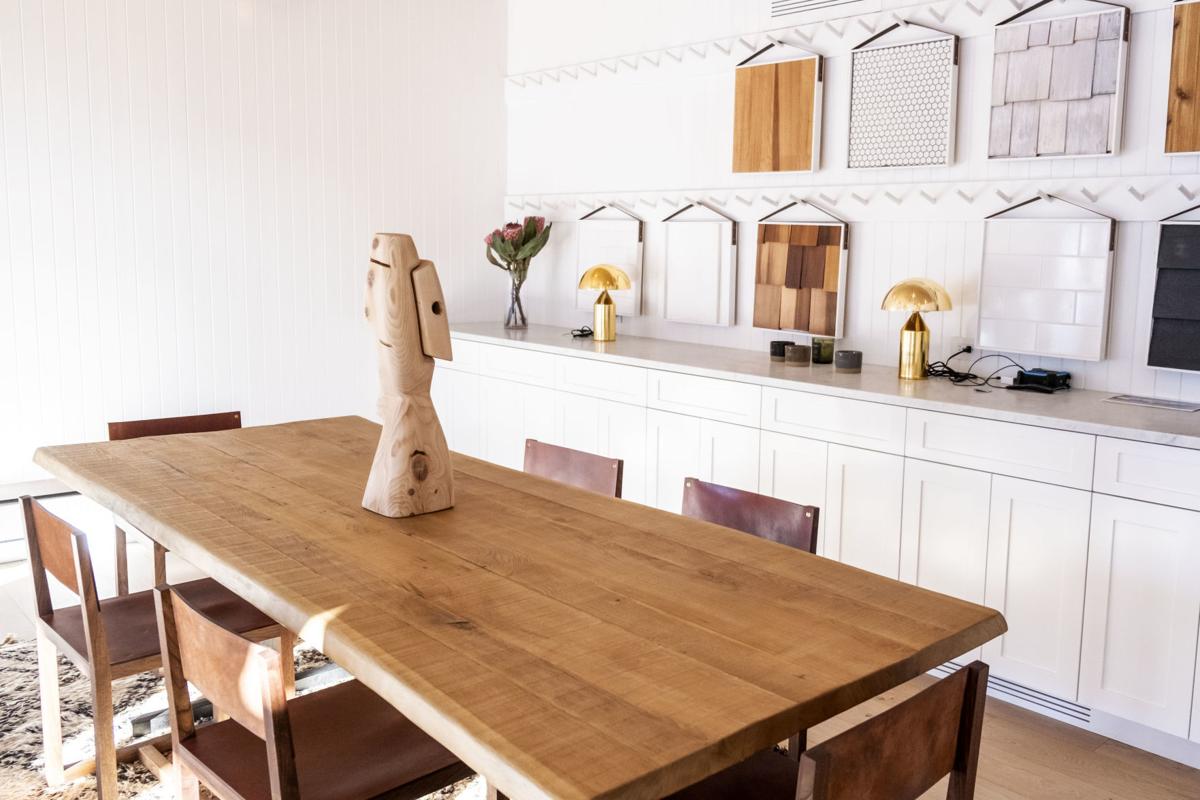 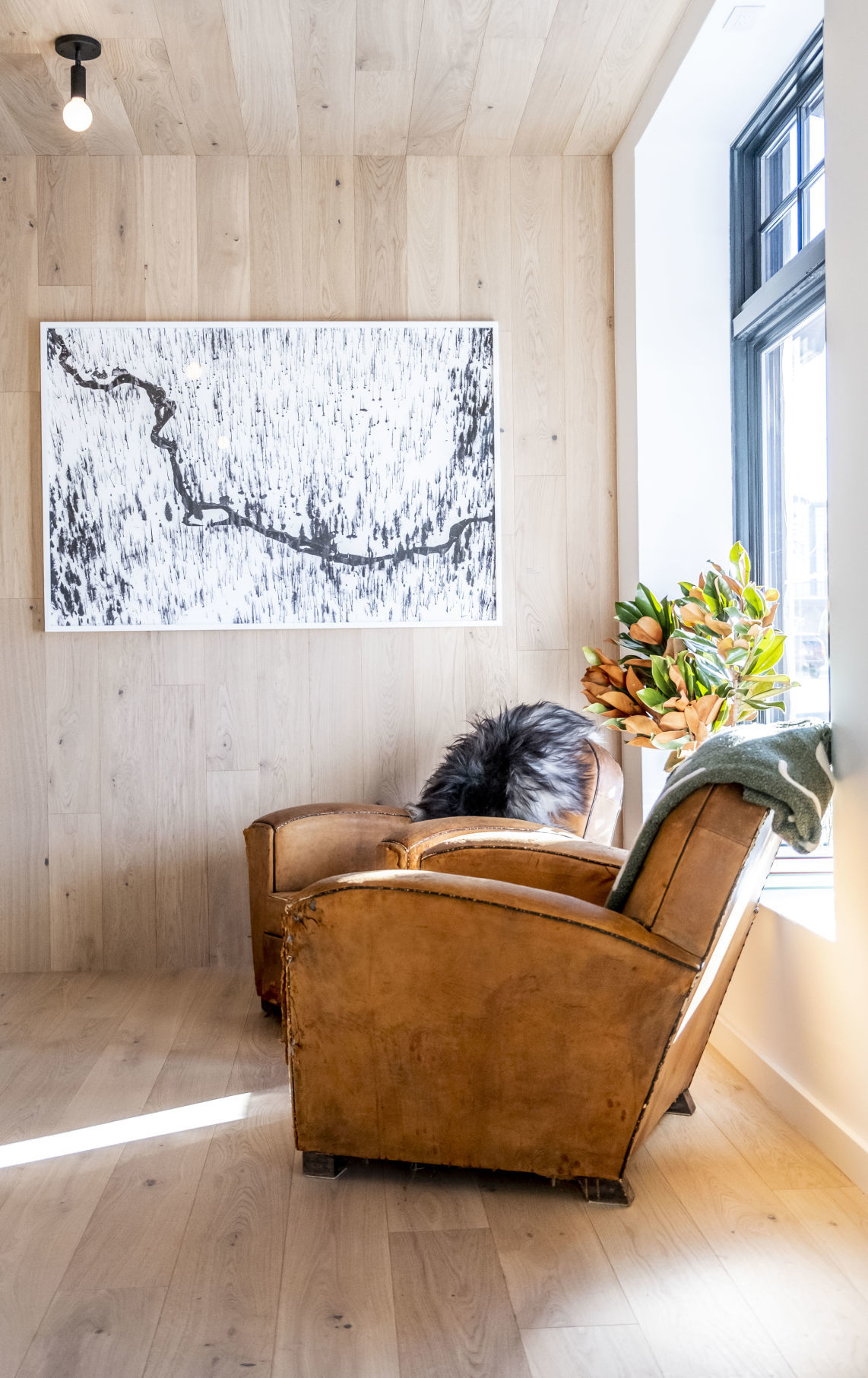 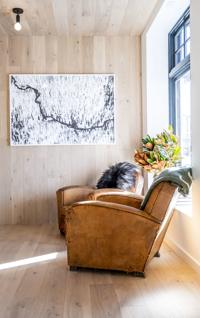 The showroom features clean, modern materials and decor used in many of the collaborators’ homes.

The showroom features clean, modern materials and decor used in many of the collaborators’ homes.

A building firm that links with other businesses to offer a one-stop sort of housing buy has opened a showroom in Jackson where shoppers can see and choose some of the details of their new home as it’s built.

Jackson Home Company built Snow King Village, hillside condos between Pine and Aspen streets just west of the Town Hill. It plans to have another 17 residential units ready for owners within 18 months; some are already well along in construction. Most so far are in East Jackson, from the Gill Addition to Cache Creek Drive and on Hall and Hansen avenues.

Caleo had been to Jackson and has a cousin here who urged him to look into doing business in Jackson Hole. That led to the partnership with Huggins.

“We wanted to work with an established builder who knew the community, knew the subcontractors, who built quality,” Caleo said.

Jackson Home Company buys land, builds and even decorates its products. Caleo said the showroom is a logical way to meet potential buyers and involve them in the house they’re having built for them, choosing from among options and letting them “personalize the house” to suit them.

“We can bring people in before the project is finished and offer them the opportunity for them to make choices or upgrades, or for us to do the interior design,” Caleo said.

Lyndsay Caleo-Karol, Bill Caleo’s sister, is a designer involved in the company. Work by her husband, sculptor Fitzhugh Karol, can be incorporated into many of the company’s buildings. Bill Caleo said the firm is also “building partnerships with other local artists” whose work could be included. Artists and craftspeople involved so far include sculptors and photographers, and also the woodworkers who have created stairways and railings in early projects.

Being able to take part in designing the homes — but not having the responsibility of dealing directly with subcontractors — is a boon for buyers, said Michael Adams, a New West vet who is vice president of development for Jackson Home Company.

“People put a lot of effort into building a house, and while it starts out fun, it’s a lot of work. ... It’s stressful,” Adams said. Being involved but not in charge, he said, “can take a lot of the torture out of it.”

The architect for the projects is Farmer Payne, led by Jamie Farmer and Scott Payne, who met more than a decade ago while working at Carney Logan Burke Architects. Farmer Payne also has offices in Ketchum, Idaho, and Shreveport, Louisiana.

Bingle and Kilgrow have the listing for Sotheby’s.

People who drive over Teton Pass to their jobs in Jackson continue to be a huge portion of total workers here, according to the Wyoming Department of Workforce Services.

The information comes in the department’s survey of employment by age and sex. Because the state uses driver’s license information to figure the sex and ages of workers, those who come from out of state to work show up prominently in the column reporting nonresidents.

In the most recent figuring the by-sex compilation shows that 38.9% of Teton County workers come from out of state to reach their jobs. Those people, 11,803 of them, can be assumed to come almost entirely from the Victor and Driggs area in neighboring Teton County, Idaho.

By age the Teton County residents and downvalley commuters were fairly evenly distributed, with the largest group of employees being those ages 25 to 34. They accounted for 4,881 workers, 16.1% of the total.

The about-40% figure for out-of-state workers was close to double the next highest in Wyoming. Campbell County had an out-of-state commuter figure of 21.3%

The Department of Workforce Services put the Wyoming average of out-of-state commuters at 13.5%.

In honor of the 150th anniversary of women’s suffrage in Wyoming, the first Business Over Breakfast of the new year will feature a panel discussion with Jackson Hole women in business.

Attendees at Thursday’s Jackson Hole Chamber of Commerce event at Snow King’s Grandview Lodge will listen in on a conversation with Clarene Law of Town Square Inns, Julie Guttormson of Vim, Ruth Ann Petroff of Snake River Roasting, Nicole Garrett of PRESeNT and Monay Olson of The Shine Group.

The moderator will be Jen Simon, who is, among other things, a member of the Wyoming Council for Women, a senior policy advisor to the Equality State Policy Center and the new “Equity State” columnist for the Jackson Hole News&Guide.

“To kick off 2020, we want to recognize the Women’s Suffrage Movement in Wyoming by listening to Jackson women who have advanced the business environment, each with their own approach and commitment,” Jackson Hole Chamber of Commerce CEO Anna Olson said in a press release. “Chamber of Commerce Board Chair Kris Shean, owner of Häagen Dazs, has invited an all-star panel to share their visions, fears, inspirations and stories.”

Business Over Breakfast is a monthly chamber event held on the first Thursday from 7:30 to 9 a.m. at various locations.

The breakfasts are open to all. It costs $16 for chamber members and $25 for others. You can buy tickets at JacksonHoleChamber.com.

The National Park Service has selected nine businesses — including several that are owned by local interests — to run scenic floats and guided fishing trips on the Snake River where it flows through Grand Teton National Park.

The new permits are valid from January 2020 through December 2029.

Grand Teton National Park has 27 concession contracts and almost 120 commercial use authorization holders that provide a variety of visitor services in the park, from wildlife tours to hotels.

The franchise fees that the selected float companies pay the National Park Service were not publicized, but as a policy, concessionaires pay a minimum 3% of the first $250,000 of annual gross receipts and 12% of the remaining gross receipts over $250,000.

In 2017, the last year data was available, fees paid ranged from a low of $700 paid by Heart 6 Ranch to a high of $110,000 paid by Barker-Ewing Scenic Tours, according to the prospectus for the float contracts.

Five Jacksonites have been honored with the 2019 “40 Under 40” award by the Wyoming Business Report.

The award goes to men and women from around the state. The Jackson five are all women.

They are Kelli Jones, Jessica Jaubert, Veronica Schreibeis Smith, Natalia D. Macker and Cassandra Hoffman. All of the “40 Under 40” were recently profiled by the Wyoming Business Report.

“These young people are shaping the future of Wyoming,” the publication announced on its website. “They’ve made a significant impact on their respective organizations, earned significant achievements through professional programs, and worked to help others through mentoring, community service and charitable giving.”

Jones is CEO of Noso Patches, Jaubert is director of Three Elephant Public Relations, and Schreibeis Smith is the founder and CEO of Vera Iconica Architecture. Macker chairs the Teton County Board of County Commissioners and is artistic director of Off Square Theatre Company. Hoffman is chief financial officer, senior trust officer and director at Two Ocean Trust.