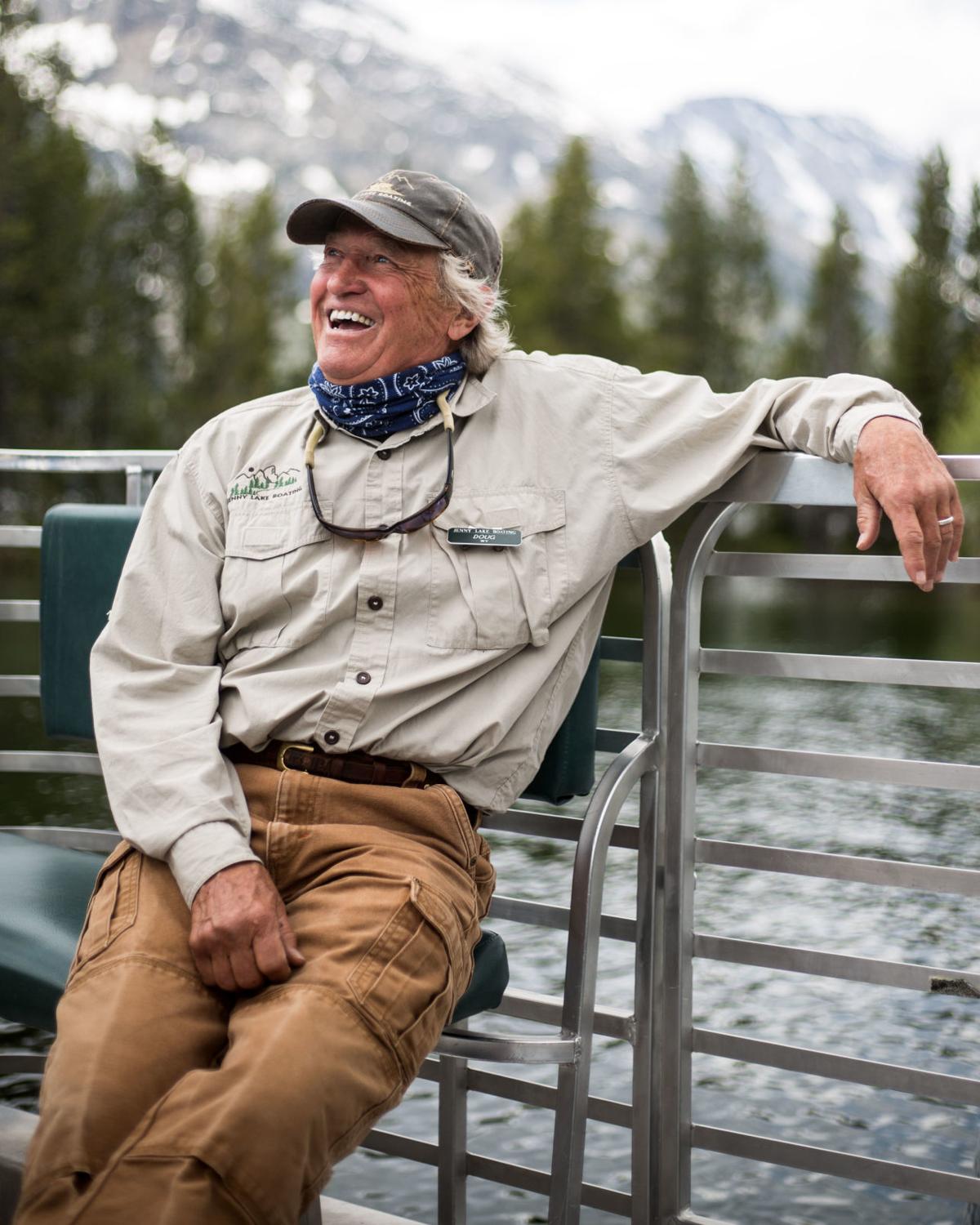 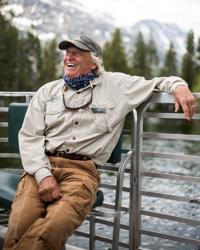 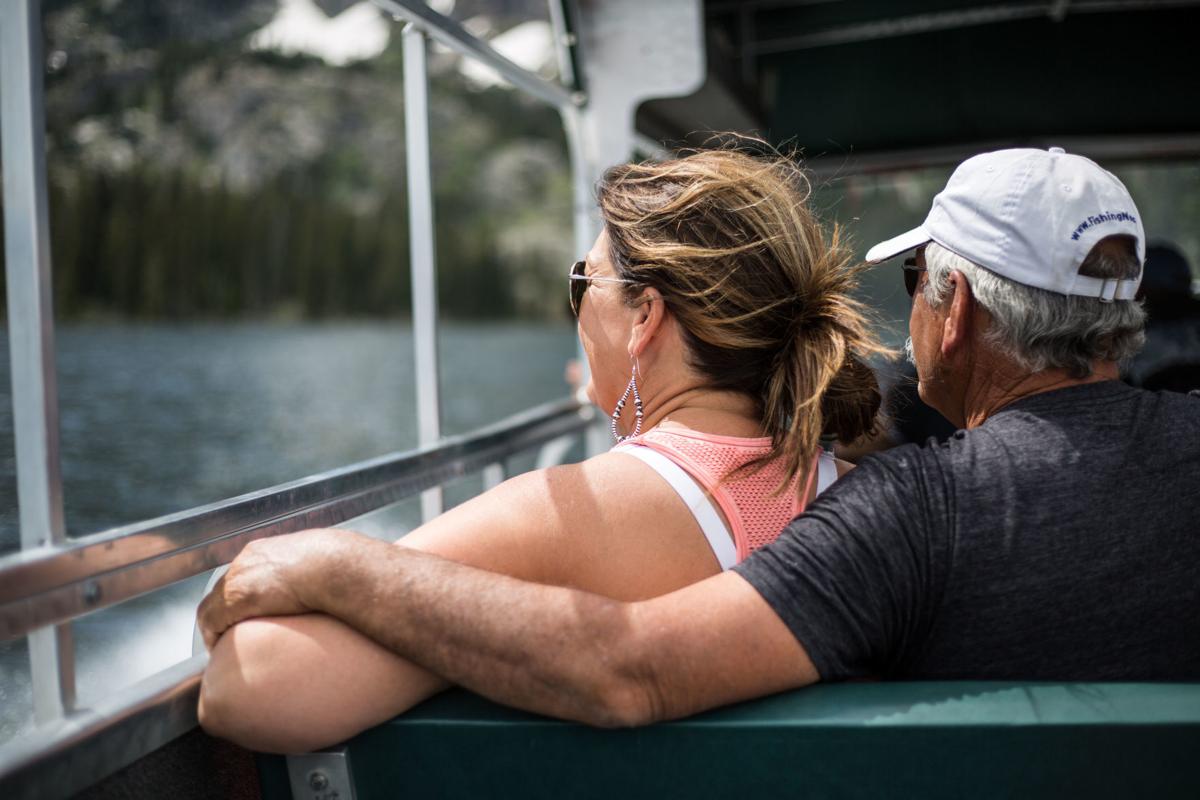 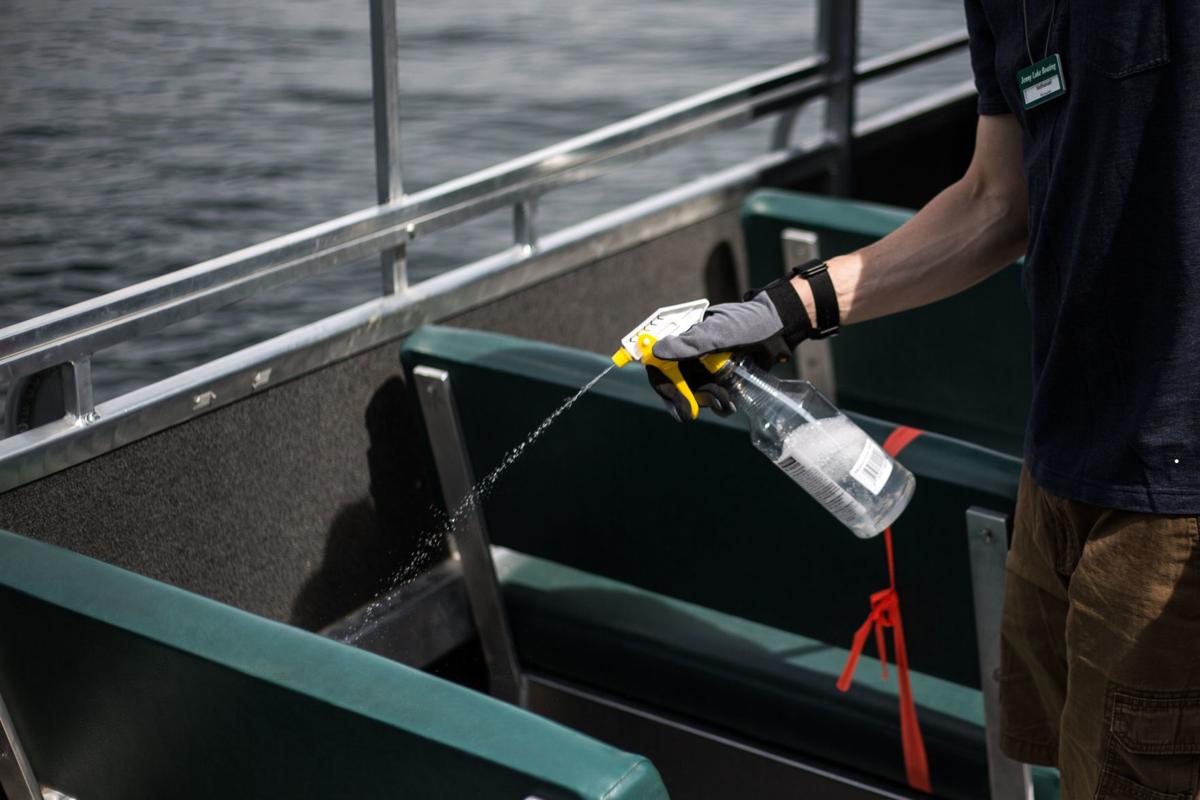 Nathanael Kuenzli cleans the passenger area of a Jenny Lake Boating shuttle after a trip from the east to west dock on Jenny Lake. Every other row of seats has been roped off to allow for appropriate physical distancing during the COVID-19 pandemic. 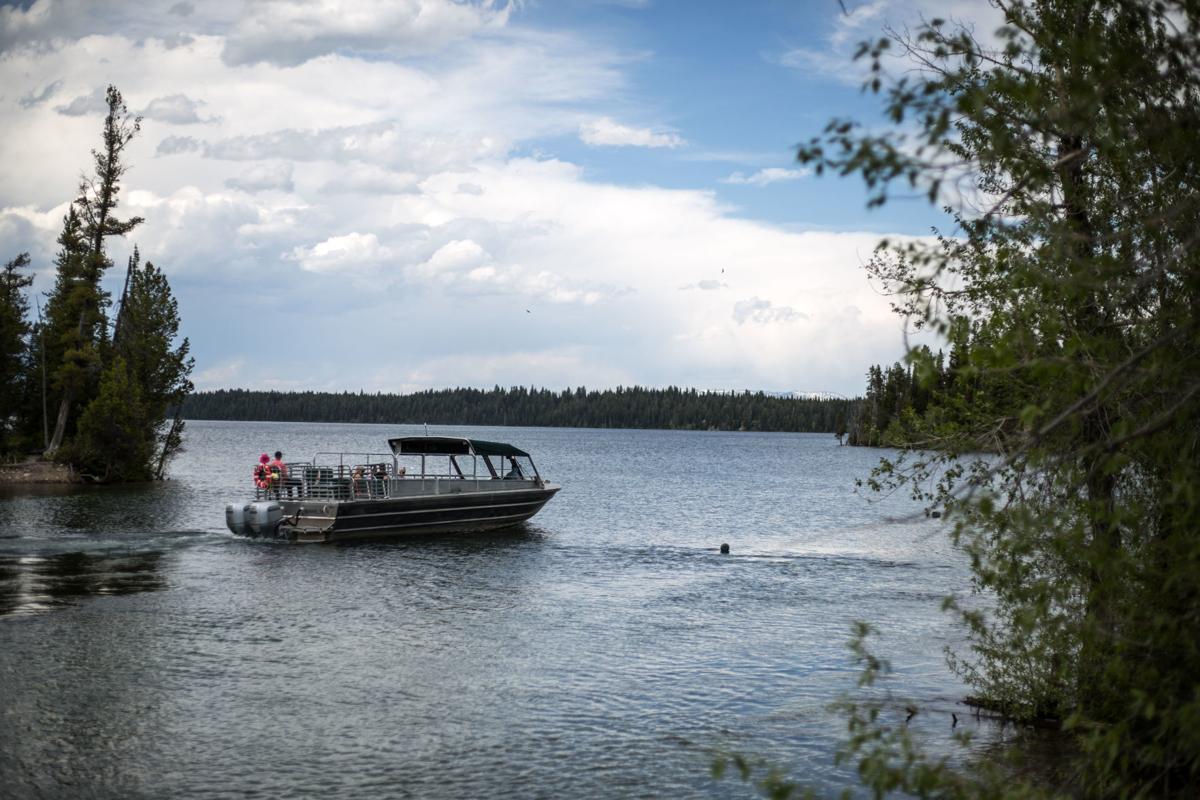 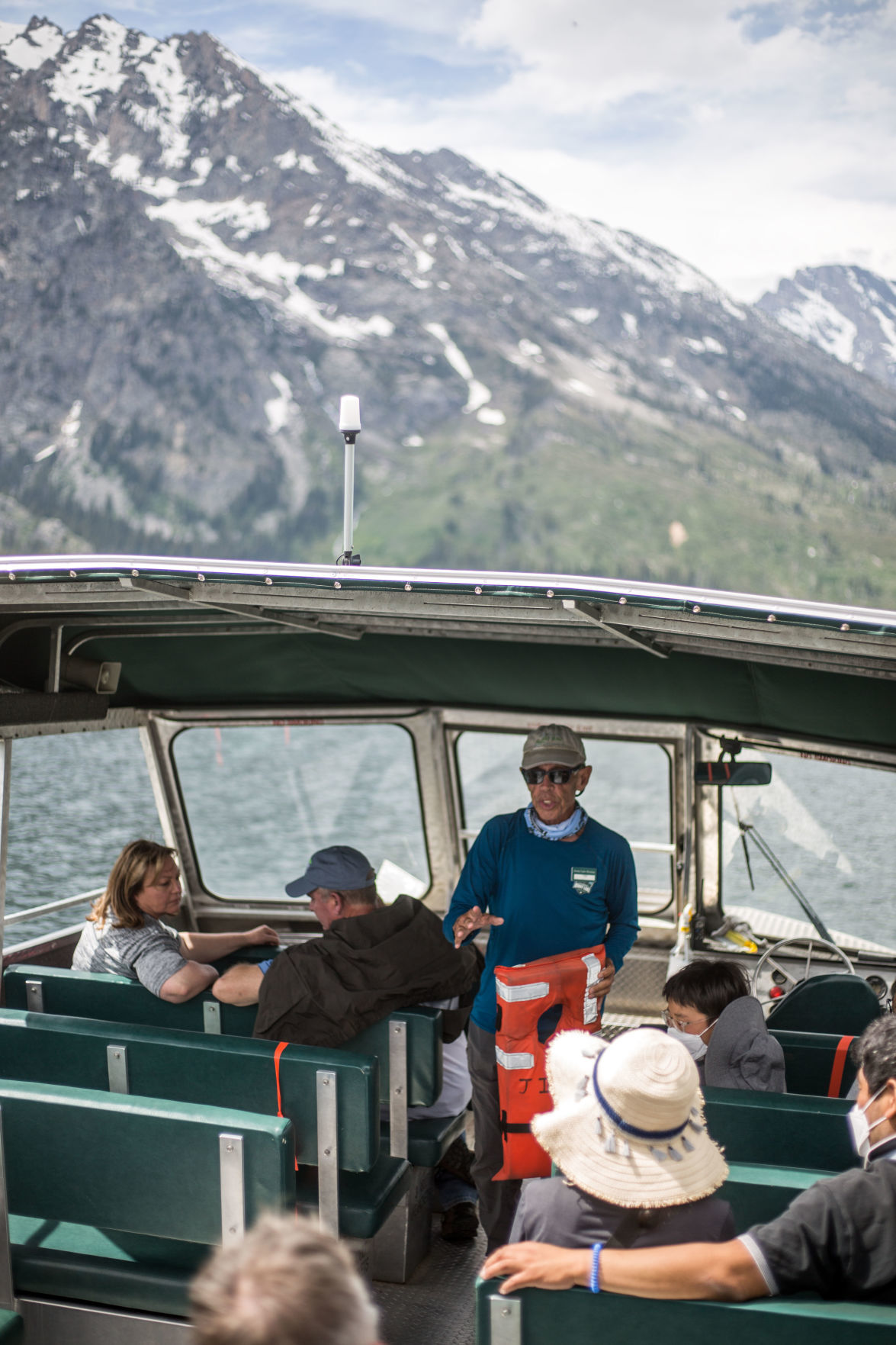 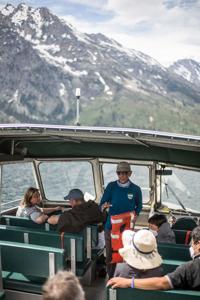 Jenny Lake Boating’s Greg Smith gives passengers a safety speech Friday before shuttling them across Jenny Lake. The shuttle service opened June 5 for the season and is running its boats at roughly half-capacity due to the COVID-19 pandemic.

Nathanael Kuenzli cleans the passenger area of a Jenny Lake Boating shuttle after a trip from the east to west dock on Jenny Lake. Every other row of seats has been roped off to allow for appropriate physical distancing during the COVID-19 pandemic.

Jenny Lake Boating’s Greg Smith gives passengers a safety speech Friday before shuttling them across Jenny Lake. The shuttle service opened June 5 for the season and is running its boats at roughly half-capacity due to the COVID-19 pandemic.

A tad past 3:30 p.m., senior Jenny Lake Boating pilot Kyle Goldstein hollered out to 10 clients who lingered on the dock in waiting.

“You guys can come on down,” Goldstein said. “We’re going to put you on every other seat.”

Mask-wearing passengers of Asian descent strolled by, as did Southerners who spoke with a characteristic twang unfiltered in the absence of face coverings.

Greeting the bunch was orange tape tied to every other bench on the 34-seat Bentz Boat vessel, which marked the off-limits seats. The sidewalk leading up to the operation’s docking station was also marked with emblems telling of the era: “STAY 6FT (2M) APART,” the stenciled insignias read. “THANK YOU FOR SOCIAL DISTANCING.”

Those words encircled some painted-on elk tracks, which conveniently were spaced 6 feet apart.

Jenny Lake Boating owner Doug Colonel, who’s led the operation at the base of Teewinot Mountain for 18 years, watched with a smile on his face. It was Friday, the first day of his season, and he was just happy to be there.

“I was ready to accept not opening,” Colonel said from aboard his shuttle boat minutes later.

Colonel tipped his hat to Grand Teton National Park, which he credited for doing a good job of managing expectations and opening up slowly and judiciously in the wake of a deadly pandemic still rippling across the planet.

The disease — COVID-19 — has altered Jenny Lake Boating’s business, but not sunk it.

Before Goldstein chauffeured the passengers aboard, another employee sprayed down the seats and guardrails with soapy water and then wiped them off.

Jenny Lake Boating is staging only three of its four vessels at its namesake lake, having for now left its largest boat on dry ground. Based on Colonel’s guess at his first-day ticket sales — about half of the usual 500 to 700 passengers for an early June weekday — the operation doesn’t yet need the fourth boat.

Otherwise, all is about normal for the tour and shuttle boat business, whose rides to the 1,191-acre lake’s scenic western shoreline have proved to be a premiere pit stop activity for Grand Teton Park’s millions of road trippers.

The dearth of crowds at Jenny Lake Boating and elsewhere in Grand Teton has been one notable change in the early going of a summer season that’s poised to be unlike any other.

While the national park through Monday had declined to release its official visitor counts for the spring, neighboring Yellowstone National Park has made its data available — and it’s likely a good barometer of local tourism figures. In the last two weeks of May, traffic flows through Yellowstone’s south and east gates (the only entrances open at that time) were 70% of last year’s traffic for the same dates.

Only time will tell if traffic ticks back up near volumes seen in recent summers. But in the meantime some tourists are making the best of a less-peopled national park experience in northwest Wyoming.

When Goldstein, the senior pilot, launched the first public shuttle boat of the season at 7 a.m. Friday, he was captaining a ship holding an obviously light payload: a family of four from Houston who enjoyed an experience, just them, often shared by three dozen people.

Then again, that exclusive Jenny Lake Boating shuttle ride isn’t all that uncommon, regardless of the year. Just rise and show up early.

“Early in the morning, anytime between 7 and 8 a.m., that’s not rare,” Goldstein said. “We don’t want to make people wait more than 10 minutes, so we’ll just keep sending boats and that can happen.”

Good to see Doug still making it happen. One of my favorite people to see each summer during my tenure with Exum. His smile hasn’t changed in nearly two decades.