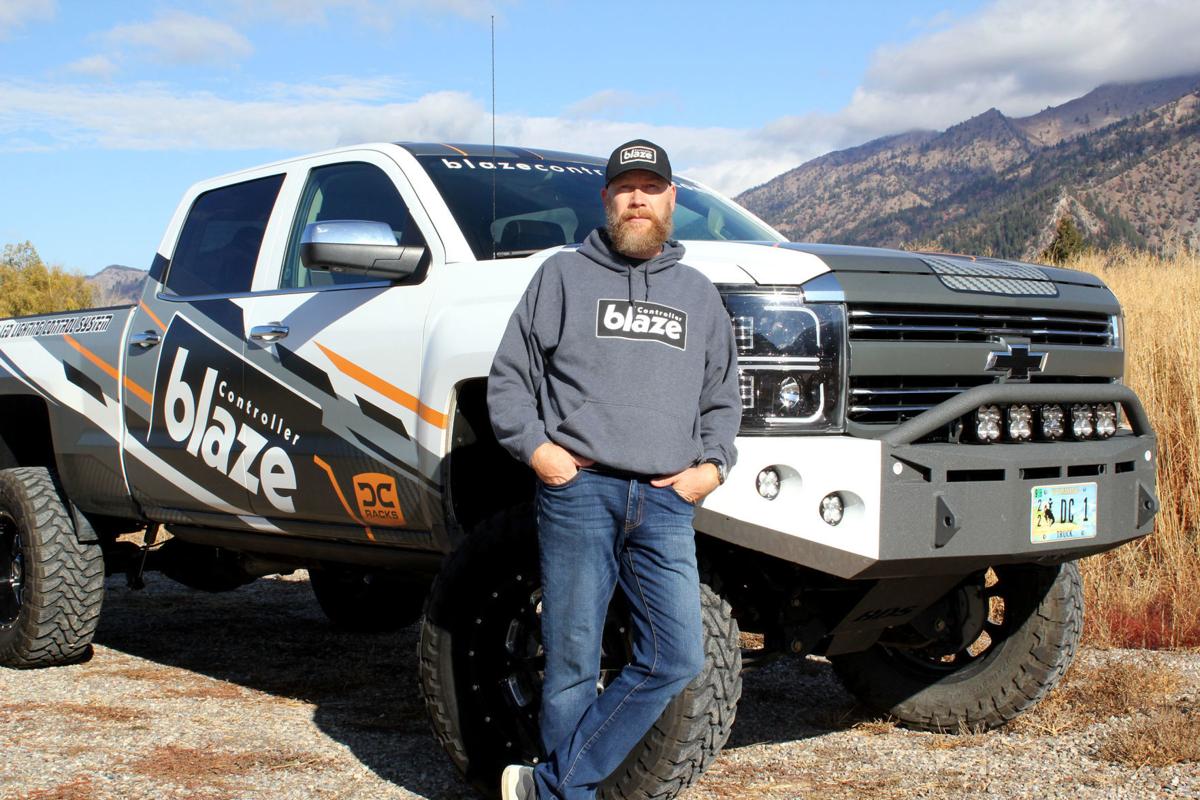 Eric Green’s Blaze Controller is a wireless system that allows people to control aftermarket lights on their vehicles.

Five years after launching his Dust Cutter line of lemonades, Eric Green is immersed in a new entrepreneurial venture.

With an engineer named Gabe Ayers he has created the Blaze Controller, a wireless LED lighting system that communicates directly with a car or truck to control after-market lights.

They want to begin making it, but after spending money on research and development they are looking for an influx of capital.

So they’ve turned to the Silicon Couloir Angel Group.

“We’re ready to go to market and need to fund the first production run so we can be first to market with this technology,” said Green, an Alpine resident who grew up in Jackson Hole.

Several weeks ago he presented Blaze Controller to some members of the group.

Angel investors are high-net-worth individuals with business and finance experience who put their own money into young businesses and mentor them. In some groups they pool their funds and invest together.

The Silicon Couloir Angel Group, which has 30-plus members, doesn’t invest collectively. Members gather to hear presentations, but each decides individually whether to support a company.

“We set up the meeting, but we don’t have a dedicated fund,” said Liza Millet, one of the angel group’s founders and a Silicon Couloir board member who’s on the committee that vets companies seeking angel funding. “They do due diligence on their own.”

Alex Muromcew, an angel investor who’s also on the committee, said that in the last 12 months approximately $1.5 million was invested in seven companies “that we know of.”

The process takes time, and not everyone who seeks angel funding receives it. How much is invested depends on what the company seeks and the angel’s appetite.

“It’s not ‘you walk in and a bunch of people write checks,’” Muromcew said. “The presentation is just the first step.”

“They just started firing away,” Green said of the investors who heard his Blaze Controller presentation. “Most of the questions were about the technology initially. ... The process is about bringing awareness and showing that this is a viable product.”

An angel investment, by definition, “is early stage,” Muromcew said. “We might be investing in a first-round ‘friends and family,’ a more formal ‘angel round’ or a later Series A investment round — a Series A implies that there is a professional investor, i.e., a VC fund is involved.

“It is uncommon for our angel group to invest in companies without any revenues,” Muromcew said. “One of the duties the Angel Group’s investment committee performs is initial due diligence to screen for the most robust company business plans and management teams to present to the group.”

Susan Pieper, founder of the Jackson Hole company DMOS Collective, has received angel funding. She said the money and the advice were important as the company built its ultradurable-shovel business.

“It really is about momentum,” Pieper said. “You’ve got to get people to believe in your vision — what you’ve got at the time as well as what you’re building.”

Muromcew said Wyoming is “one of the worst states” for young companies to raise capital. People are geographically spread out, “so it’s harder to get that critical mass of entpreneuers and investors in one place.”

Another group, Breakthrough 307, has launched an angel investment fund primarily with Casper investors but also some from Laramie, Cheyenne and Jackson.

It’s a benefit to entrepreneurs in the Teton region to have an angel group in their backyard. Angels tend to invest in companies that are located near them, according to the Angel Capital Association.

Pieper, who has a Harvard business degree and worked in the financial field before launching DMOS, said ties to the community are important in angel investing.

For a startup “90 percent of the time your money will come from 100 miles of your business,” she said. “It’s critical to have the Silicon Couloir network to barn-raise these companies.”

For any angel investor, of course, the hope is to eventually earn a return on his or her money.

“The idea is that at a future date the company is sold or does an IPO or is very profitable and is paying back dividends,” said Muromcew, who has mentored and invested in local companies. “If you’re investing as an angel you need a five- to 10-year time horizon.”

Around the country angel investing is a growing source of capital for startups. They may turn to angels because they aren’t candidates for a bank loan, they don’t see crowdfunding as a good fit and they might be too young and small to interest venture capitalists.

“Angel investing is usually for smaller, younger startups who wouldn’t meet the criteria for venture capital,” Muromcew said. “Usually angel rounds are under $1 million, and often that’s too small a chunk for a venture capital fund to run. Often venture capital funds want to see a higher level of return or profits before they invest.”

The Angel Capital Association cites estimates that in 2015 U.S. angel investors poured $24.6 billion into 71,000 small businesses, many of them startup or very early stage companies. Angel recipients in the past, it said, have included Google, Starbucks, Facebook and Costco.

“There have been enough success stories of young companies going public and getting acquired that I think it’s encouraged investors that the returns are there,” Muromcew said.

Green saw angels as a better possibility right now than a bank or Kickstarter crowdfunding campaign.

“Banks aren’t likely to loan money to startup businesses,” he said. “They want to see cash flow and success because it’s too risky. You have to use your house, your car, everything you own as collateral.”

He and Ayers decided against a Kickstarter or Indiegogo campaign because “we’re at a point where we want to get in the marketplace as fast as possible,” Green said. “We would have a lag in time where we presold our product, brought in all the money and went to production.”

“Ideally an investor should bring more than just a check,” Muromcew said. “You hope for somebody who understands the industry or has a good Rolodex, someone who can not just invest financially but help it grow.”

Green has seen that firsthand with Dust Cutter Beverage Co.

“What I have found over the years is that relationships are almost more important than the money,” he said. “It’s invaluable to be able to reach out to someone and get an answer to something.

“That’s why I’m always willing to do these presentations, because I want to make as many connections as I possibly can,” he said. “You never know who has a friend in the automobile lighting business.”

The Jackson Hole angel group was started in 2010 by Millet and Mike Eden. Silicon Couloir, an organization that promotes entrepreneurship in the Tetons, was born a few years later.

The angel group made a few changes recently to, in Muromcew’s words, “bump up our game.”

The group joined the Angel Capital Association, which will keep it up to date with what’s going on in the field of angel investing.

The group also created a Gust website to take applications from investors and companies.

“We thought it would be advantageous to make it easier for companies to find us,” Muromcew said.

To be successful any angel group has to keep two constituents happy, he said. Companies need to have confidence that when they come to present they will see an audience of sophisticated investors and a chance to raise money. Investors must be confident they’ll have a pipeline of compelling investment opportunities.

“To meet those two criteria we thought we could tweak our process a little bit,” he said.

The priority is local companies — Teton, Sublette and Lincoln counties, Wyoming, and Teton County, Idaho — and then Wyoming and the Rocky Mountain region.

“Ideally we will meet six times a year and have two companies present at each meeting,” Muromcew said. “So we have to make sure we have some quality companies in the pipeline and that we have enough investors in town.”

Getting into the market

Meanwhile, Green is confident about his product on the market.

“The popularity of after-market lighting and parts like bumpers and grills is at an all-time high,” Green said. “People are spending a lot of money customizing their vehicles to match their needs.”

In addition to seeking angel funding he has applied for a grant for Blaze Controller through Kickstart: Wyoming, a new program that awards $5,000 to $50,000 to startups in the state.

“Finding investors is a very long process,” Green said. “I’m hopeful, but I’m not optimistic, that we would have investors putting in capital before the end of the year.”

Investors who'd like to join the Silicon Couloir Angel Network and companies seeking funding can start the process online at Gust.com/organizations/silicon-couloir-angel-network.

"We are always interested in growing the network," said Alex Muromcew, who's on Silicon Couloir's investment committee.

Investors don't have to live in the Jackson Hole area or even be seasonal residents, but the group wants to have enough investors in town when companies give presentations.

"If you're not around to attend the meetings it's not much value," he said.

Investors have to meet financial requirements:

• Your individual net worth or joint net worth with your spouse exceeds $1 million, excluding your primary residence.

"This type of investing is higher risk," Muromcew said. "They're unlisted. If you want to raise cash and sell your position it can be extremely difficult. The SEC is thinking this should be somebody who, if things go wrong, they can afford the loss."

The Angel Capital Association notes the risk in the FAQ section on its website.

"The only academic study of American angel investments found that angels lose some or all of their money in 52 percent of their investment deals because the companies go out of business," it said.

"The most sophisticated angels make at least 10 investments in order to make a return on their investment, counting on one or two to provide nearly all of their return," it said.

The Silicon Couloir group does not have data on the success rate of companies that are funded by its members.

"Since all the investments are done by individual angels instead of by a fund or syndicate, it is much harder to track," Muromcew said.