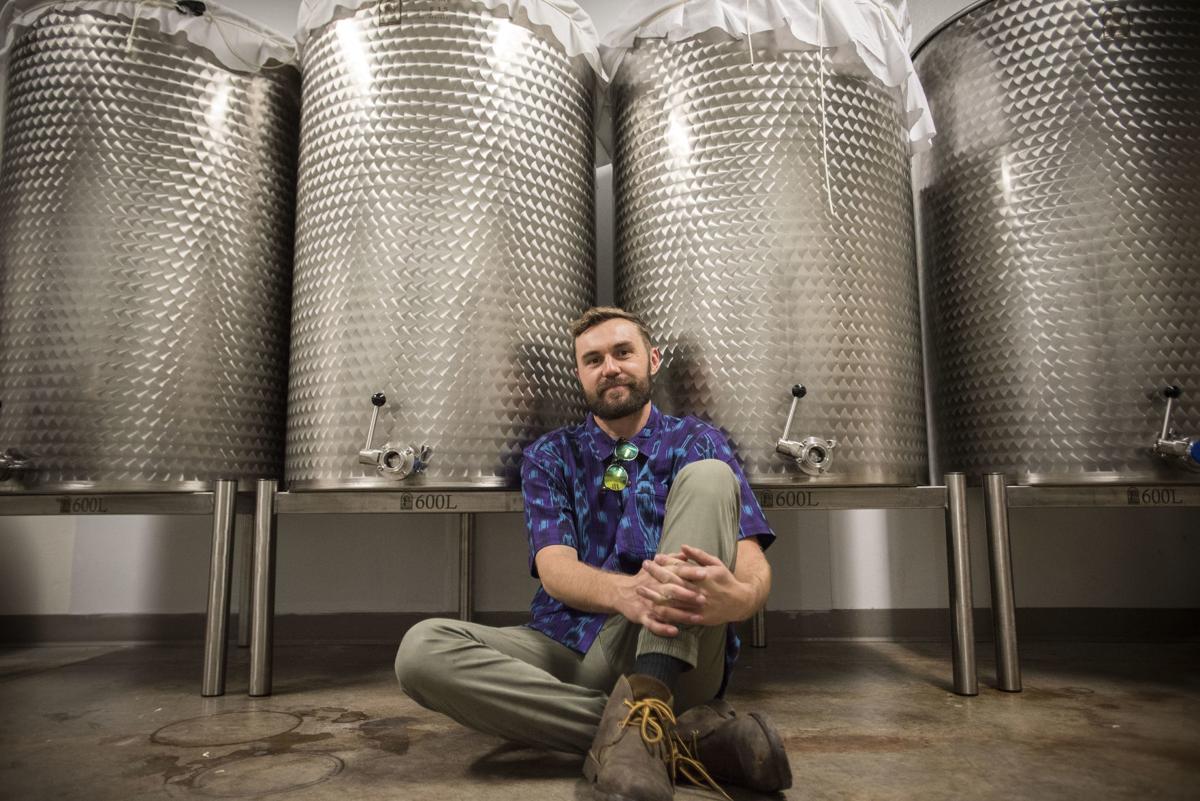 Ford Hebard was inspired to create Teatonic Kombucha while living in Portland, Oregon. He launched the Driggs, Idaho, business in the spring and will begin bottling this week. The product will be on tap at Jackson Whole Grocer starting today. 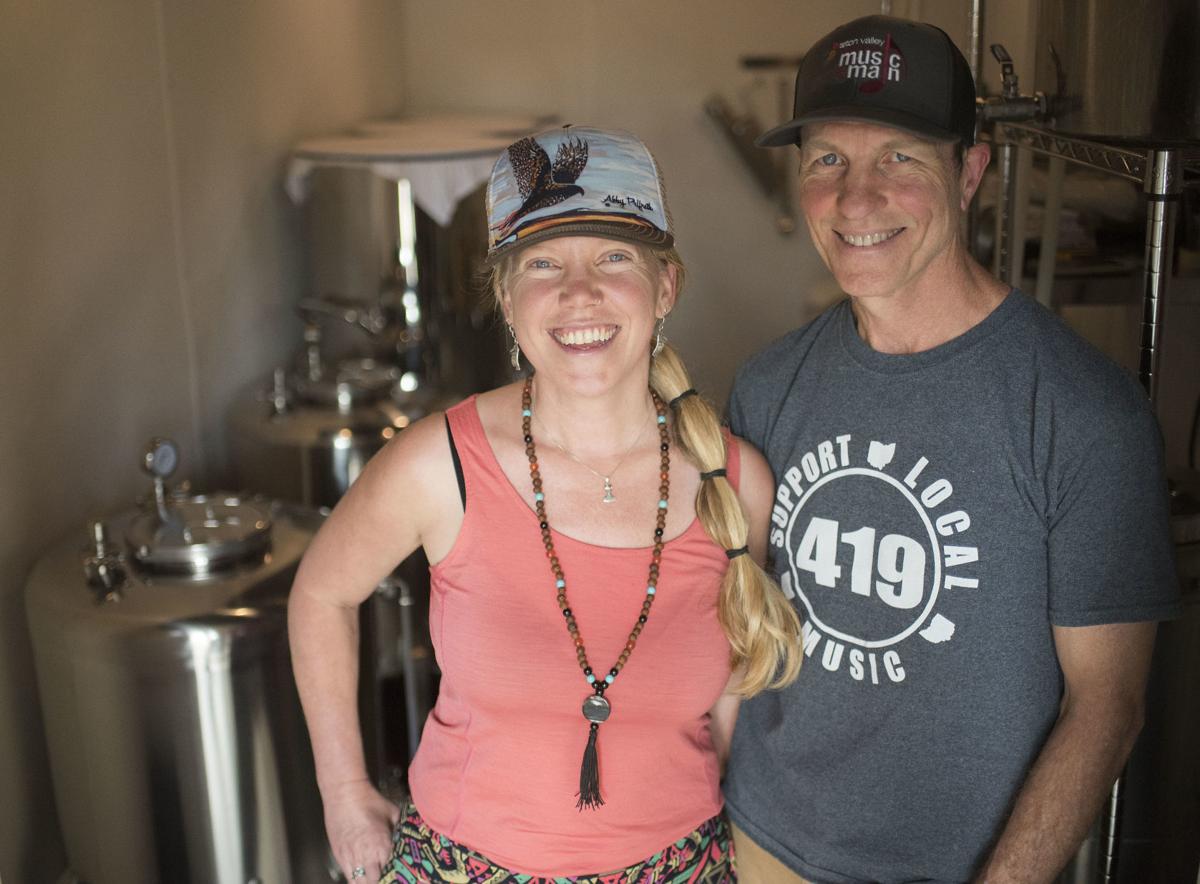 Mollie Houkom and Mark Bostleman’s relationship has involved kombucha since their first date. Today they own and operate Ascent Kombucha, brewing out of a small space in downtown Driggs, Idaho.

Ford Hebard was inspired to create Teatonic Kombucha while living in Portland, Oregon. He launched the Driggs, Idaho, business in the spring and will begin bottling this week. The product will be on tap at Jackson Whole Grocer starting today.

Mollie Houkom and Mark Bostleman’s relationship has involved kombucha since their first date. Today they own and operate Ascent Kombucha, brewing out of a small space in downtown Driggs, Idaho.

The probiotic beverage, made from a fermented tea base and flavoring, has been popular in cities on the West Coast for many years. Now it’s made its way closer to home.

Ascent Kombucha and Teatonic Kombucha, both started this spring, are a stone’s throw from each other in downtown Driggs, Idaho. Both breweries came onto the scene this spring and summer when drinks were sold at the Jackson Hole Farmers Market and the Jackson Hole People’s Market. A selection made it on tap at places on both sides of the pass, like Barrels & Bins Community Market, Music on Main, Cowboy Coffee, Picnic and Hand Fire Pizza.

Each business has its own story of a humble beginning, with plans for expansion. And if Melvin Brewing is any indication — the brewery started in the back of Teton Thai and now has a full factory in Alpine as well as a location in Washington state — the sky’s the limit.

Mollie Houkom and Mark Bostleman have their very own “kombucha love story.”

They met on Tinder, a dating app. In quintessential Teton Valley style their first date was hiking Table Mountain. Houkom brought ginger kombucha — Bostleman had never had it before — and the rest, they say, is history.

Houkom dreamed about brewing her own kombucha for a decade. A massage therapist who is “into health” and had been experimenting with juices and smoothies, she is a perfect match for software developer Bostleman. They’ve divvied up duties, with Bostleman primarily handling the operations, business and accounting aspects and Houkom doing the brewing and marketing.

Houkom uses what’s called a continuous brewing method to make the kombucha. First, an organic tea blend base — white, black and green — is fermented with organic cane sugar and the active culture, called SCOBY. That stands for symbiotic culture of bacteria and yeast. Ascent buys its culture from an expert, someone Houkom called a “kombucha whisperer,” and it comes vacuum-packed.

A second ferment adds infused flavor for a milder taste. The whole process takes between 1 1/2 and two weeks.

“We pay a lot of money to start each ferment with her culture,” Houkom said. “We didn’t get it from the neighbor. Let’s leave that to the experts.”

“The biology is not super predictable,” Bostleman said. “She’s waiting on the taste, I’m looking at the pH. When it’s ready, it’s ready. We’re kind of a slave to it.”

Planning began last fall, with Houkom brewing at home. Names were registered in December and January. Then they had to find space. In March construction began in a 100-square-foot room in the back of Three Peaks Restaurant and Catering’s kitchen. Ascent “hit the ground running” in May.

“We’re really not into taking it slow,” Bostleman said.

Once Ascent took off, demand rapidly outpaced production. The business couldn’t keep up, despite bringing two more fermenters onto the production line.

“Barrels & Bins, they’ve been saying that the national brands in bottles are sitting on their shelves now,” Houkom said.

For now Ascent’s brewing space holds three fermenters. But come this winter they plan to expand to a warehouse space 10 times larger north of Driggs. There they can start bottling their brew — part one of their market expansion plan — as well as have keg washing and refrigeration on-site.

Expanding outside the valley will be the next step, after they figure out the distribution challenge.

“Right now we literally put kegs in our car and drive them to the customer,” Bostleman said.

For now he and Houkom will keep doing what they’re doing: striving to make drinkable, approachable kombucha. Houkom thinks of flavors that she’d like to drink a pint of while listening to music, and some, like “ginger and juice” have taken on a ‘mocktail’ theme.

But that’s not their intent. She and Bostleman are just excited to offer a nonalcoholic craft beverage in the area.

“You can get a million of those in terms of craft beer or wine or bourbons or whatever, but if you don’t want to drink alcohol you’ve got Coke, Pepsi, water and iced tea that’s probably processed. Water is only so exciting.”

“At Music on Main it was pregnant women who were really excited,” Houkom said. “Kids were buying it, and people who didn’t feel like drinking or were the designated driver, they said, ‘Thanks for being here.’”

Ford Hebard was inspired to create Teatonic Kombucha while living in Portland, Oregon, arguably the kombucha capital of the country.

“I’d been brewing kombucha at home for a couple years and had this idea,” he said. “Jackson’s kind of missing out on fresh, organic, locally produced kombucha.”

“Pretty short after that, I did an apprenticeship with Brew Dr. Kombucha in Portland,” Hebard said. “And I dropped out of grad school.”

His time with the national brand included time working with master brewers, picking their brains.

“They helped me formulate some of the first recipes I made,” Hebard said. “I think kombucha is mainstream on the West Coast and is gaining popularity and spreading from the West to the East.

“If I started a kombucha brewery in Portland it would probably be a bit late,” he said. “But the time was right for doing it in Jackson and the community I grew up in and love.”

For those who haven’t tried kombucha, Hebard said that while it may look a little funky during the fermenting process, “the end product after brewing is rich in antioxidants, probiotics and healthy amino acids.”

“Understanding the science behind the brewing of kombucha lends itself to being a lot tastier of a product,” he said. “It’s gaining traction as being a staple and an artisan food.”

Teatonic Kombucha uses botanicals to keep sugar content as low as possible on top of the tea base. Hebard sometimes adds honey to create Jun, a slightly different probotioc than kombucha, and also buys his SCOBY from a brewer outside the area.

“I usually just start by making tea blends, and if I make one that I think tastes good as tea, then I usually move on and start making it in small batches before I move it over to the full system. Formulating a recipe definitely takes a while.”

By the time Hebard is done brewing there is less than 0.5 percent alcohol in the drink.

“There’s this huge misconception that you can get a buzz off of kombucha,” he said. “As brewers we take pretty careful measures to control the yeast when they are in the anaerobic state, which is when they’re producing the most alcohol.

“Once it reaches the desired level of fermentation, it’s refrigerated so the yeast activity slows down and they’re not producing alcohol,” he said. “You’d have to drink a lot of kombucha to get drunk — gallons and gallons.”

Teatonic, like its neighbors at Ascent, is rapidly growing. Hebard will begin bottling this week and, starting today, Teatonic will be on tap at Jackson Whole Grocer.

“I think the demand has been huge, and the local support we’ve got, it’s been awesome,” he said. “There are a lot of people coming back week after week, starting to get attached to certain flavors. If they haven’t already, they’re starting to adopt kombucha as part of their daily diet.”

Neither kombucha brewery knew about the other in its infant stages, and they say they’re content to keep doing their own thing.

“I just think it’s kind of a collective conscious type thing,” Hebard said. “If someone is having a good idea, there’s probably someone else having the same idea somewhere else. I think it’s great for our town to have two different kombucha companies, and I think we both have pretty different flavors and philosophies on what type of kombucha is good.

“It’s just like any other kind of craft beverage, people are going to have different tastes for different kinds and competition and diversity usually lends you a good product. I think if Jackson can support four beer breweries we can handle two kombucha breweries.”