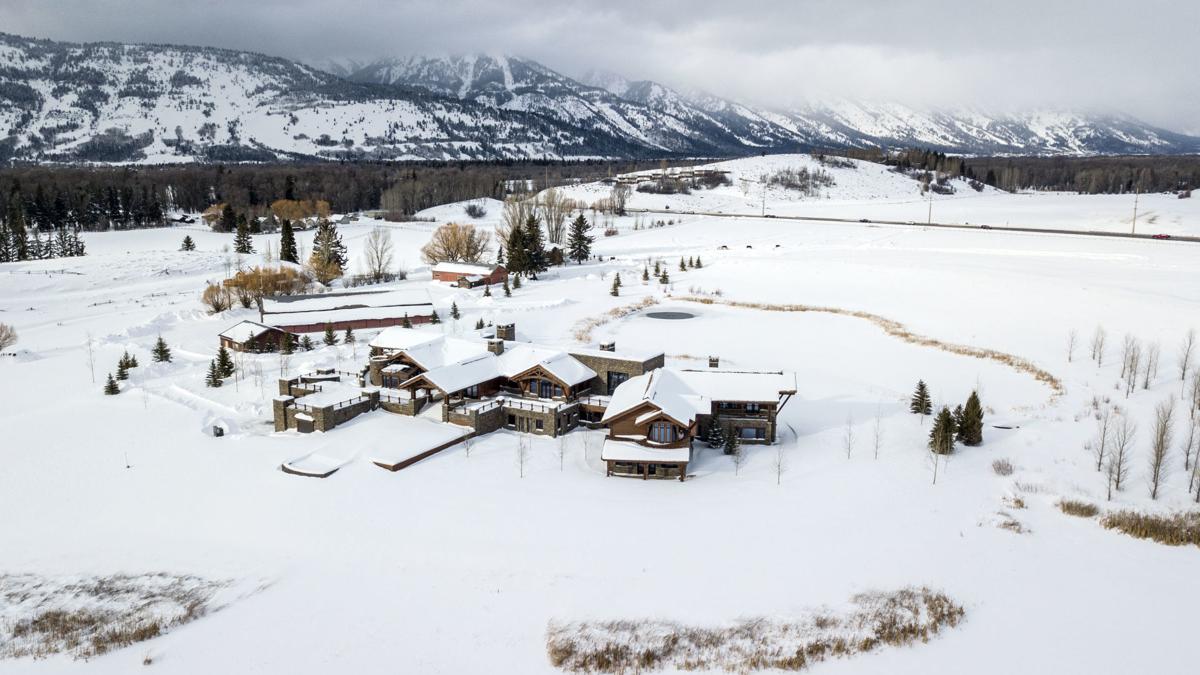 Fintan Ryan purchased the 250-acre Puzzleface Ranch property in 2008 for $7.8 million and, after years of legal battles over county building and development regulations, is selling his new 18,000-square-foot home for $35 million.

Ryan’s home was the subject of legal battles between the homeowner and Teton County because of his insistance that an 8,000-square-foot first floor was actually a basement and thus exempt from the county’s 8,000-square-foot building limit.

Fintan Ryan purchased the 250-acre Puzzleface Ranch property in 2008 for $7.8 million and, after years of legal battles over county building and development regulations, is selling his new 18,000-square-foot home for $35 million.

Ryan’s home was the subject of legal battles between the homeowner and Teton County because of his insistance that an 8,000-square-foot first floor was actually a basement and thus exempt from the county’s 8,000-square-foot building limit.

You’d think it would be hard to miss 18,000 square feet of luxury house and giant barn a couple of hundred yards from a major commuter route.

But it could happen with the house built by Fintan Ryan.

That’s because among the several battles Ryan fought to build his Jackson Hole dream home he won the struggle to create big berms around much of the building. His house sits behind dirt ramparts that shield it from the view of the thousands of cars that pass every day on Highway 22.

But now the house — subject of years of planning department and District Court disputes on its way to completion — is looking for a new owner. The house is listed by Tom Evans, an associate broker at Jackson Hole Sotheby’s International Realty, just months after the final touches were done.

Evans, no stranger to big deals, is advertising the place on behalf of his client at $35 million. Several real estate websites called it “the most expensive new listing” in the country.

“I don’t anticipate it flying out the door,” Evans said of the house and ranch. “But I think it’s going to be interesting, given the kind of interest we’ve had.”

Viehman said how quickly a big-dollar property will sell is always tough to know.

“Some properties can take a couple of years to find the right buyers,” he said.

The place went on the market quietly two months ago, and Evans just began advertising it.

He said it’s been shown three times and called that “pretty positive” for what he predicted will be “a summer sale,” a deal being signed after people can get a better look at what they’re buying.

The price is high, but the property puts to shame what most of Jackson’s rich folks call second homes. The house itself — oh, call it a mansion, why not? — has seven bedrooms and 11 bathrooms. There are nine fireplaces and a four-car garage, gym and wine cellar. There’s a movie theater and a library.

A big, clear view of the Tetons can be seen from the porch that goes around much of the building or through the tall windows that wrap it. Outside there are patios and an alfresco kitchen and fireplace. There are two ponds, including the Skyline Pond, near the highway, the seasonal home of a variety of waterfowl and other birds.

Inside the house the first floor has three “pods” that combine a living or sitting area with two bedrooms, providing a bit of separation. Each of those pods also has direct access to the outside.

The whole thing sits on 215 acres.

Neighboring, and separately deeded, are two other parcels, each in the 5 1/2-acre range. One is vacant; the other has the 2,100-square-foot house. Ryan bought it all in 2008.

The News&Guide reported then, based on county records, that the sale price was $7.8 million. Just months before that sale the property was listed at more than $26 million.

The Ryans — Fintan, his wife and five kids — have lived in a guest house over the past five years. Evans said the sparsely furnished main house has been lived in probably only about 30 nights.

Evans didn’t know why Ryan decided to sell and return to his home in Nevada, but thought “he was planning on living in it.

“Not many people would build something like this and not move in,” he said.

The battle to build the house played out in public view over several years, with bureaucratic fighting with planners about its size and also about the berms built to separate it from the highway.

There was talk of a major development of the land in the 1970s when it was purchased with the aim of saving much of it. The buyer then created the adjacent Skyline Ranch subdivision and put the easement on the flat ranch land, including the ponds that were home to swans, ducks, geese and osprey. The 1977 county rules would have allowed up to 68 homes on the 215 acres, according to Nature Conservancy calculations.

Ryan eventually prevailed in every important aspect of the dispute. The 14-foot berms are in place, though their construction inspired a continuing battle by the county to prohibit homeowners from building them around their houses.

A dispute about the grade of the house ended with Ryan building a house that’s twice the county’s 8,000-square-foot limit because he maintained that the first floor was a basement and thus exempt from the calculation, though it’s actually first-class living space and in no way underground.

Ryan argued the county had approved the elevation of the 8,000-square-foot elevated basement because of high groundwater. Planners said there was no such understanding. The District Court eventually ruled in Ryan’s favor.

“No one is ever going to be able to build anything that big here again,” Evans said.

Evans said a first impression is that the house “is almost like a clubhouse,” but that “you really need several visits to really appreciate the property.

“It’s very well done; it takes great advantage of the viewscape, the surrounding mountains. It’s really a nice place, with a sense of separate living for a family or multiple families to own it.”

The big windows, he said, “bring the outside in,” and the floor plan “means people are not overcome by the size ... it doesn’t feel as big as it is.”

The controversial 14-foot berms actually improved the situation, Evans thinks, because before them the flat land left the house site “a little exposed” to thousands of Jackson workers driving past every day, and also left people on the road staring at a house that’s now concealed.

“It’s really unique in the sense that it’s got this beautiful location, convenient to town, to Wilson, to skiing,” Evans said. “The berm and the landscaping he did really improved the visual from Highway 22 on a rather flat piece of ground.”

And it works both ways: Passing vehicles are probably “90% concealed by the berms” to people in the house, Evans said, and as the landscaping takes hold “it could definitely hide the highway in totality ... it was very well done in that way.”

The berms block not only the view of cars but also their noise, Evans said.

Viehman agreed: “It’s on a major highway, but it’s 215 acres, with the berms, and when you stand in the middle you don’t hear the noise.”

The Nature Conservancy easements mean the property is nearly certain to remain as it now is. The two 5-acre lots could be developed, and buildings already on site could be replaced, Evans said. But no additional use other than agricultural can be made of the 215-acre parcel.

The previous owners, David and Melinda Kornblum, operated as the Puzzleface Ranch, and offered riding lessons, horse boarding and hay for sale that was grown on the property. Evans said easements allow the new owners to continue ranching operations or to lease the land to others for ag use.

People considering buying the property might “feel like they’re buying a job because you’re living in this beautiful home but have this ranch to maintain, run horses, have hay to put up. You could run some cattle out there.

“But all that could be leased out to neighboring ranchers,” Evans said. “As an owner you don’t have to worry about the tractor breaking down or the employee not showing up. You can get somebody else taking that responsibility.”

It isn’t Evans’ first involvement in a big house and property sale. Among his transactions are the sale of the 1,500-acre Bar BC Ranch, listed at $112 million, and the 1,200-acre Spring Gulch Ranch, listed at $75 million.

Evans, in Jackson since 1978, also had the listing on Four Springs Ranch in 2017, a 7,715-square-foot house on 265 acres south of Wilson, when Sotheby’s associate broker Jake Kilgrow found a buyer. That property had been listed at $53 million.

“I’ve had some really good listings in my life, but this one is special,” he said.

The Ryan house, or whatever the buyer wants to call it

The house was designed by architects Roger Strout and Hans Schuldt of Studio 307 Architects.

Interior design was  done by Jacque-Jenkins-Stireman, and the landscape architecture was by Brannon Bleggi of Verdone Landscape Architects.

Some features of the house and property:

• There's a three-bedroom, three-bath caretaker's house of 2,520 square feet.
• The house on one of the neighboring parcels is 2,109 square feet, three bedrooms and three baths.
The theater in the main house has a 98-inch television and 12 leather theater-style seats.
• The powder room near the entrance has barnwood walls.
• The main house has triple-pane windows, timbers from Canada and in-floor hydronic heating with 51 independent zones.
• The house has more than 9,750 square feet of decks, patios and balconies.
•  One pond is lined and has an aerator and a beach along part of its edge.

Is it just me or am I the only one who finds the Jackson community's "woke" positions on every topic just a tiny bit hypocritical when it comes to folks insisting on building multi-million dollar homes in this area.

Make no mistake, I am a capitalist but even I find this conspicuous consumption grotesque.

[sad] I used to board my horses there when Ken and Pat Synder owned and then when David and Melinda owned it. Just another JH land mark gone! So sad.

and because it has a consevation easement on it the yearly property taxes are a mere $5000. Meanwhile homeowners in the valley see their property taxes increasing drastically every year.

Seems everyone pays dearly for these conservation easements. That is everyone except the people building and living on the property.

I seriously doubt your ascertain. The bulk of the land will have very low taxes, yes. That’s what putting land in conservation does. However the home will likely have a tax bill of $75,000 annually.