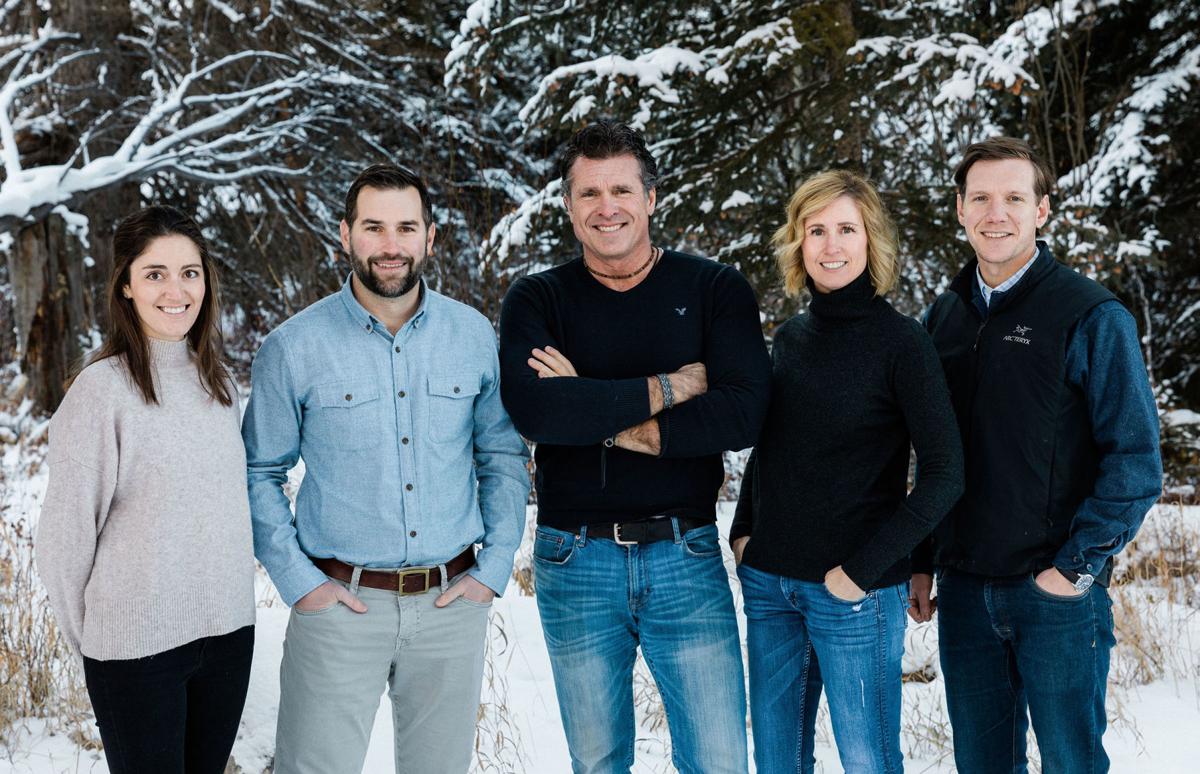 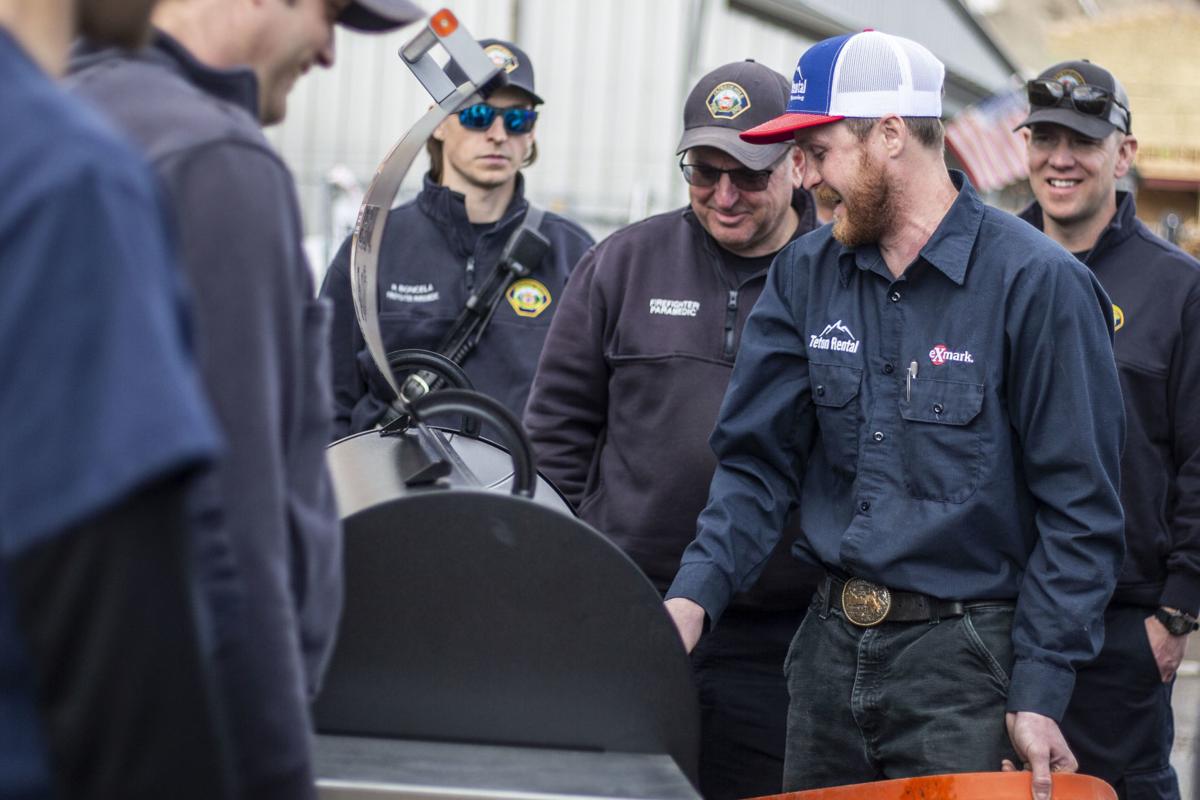 Jake Vosika shows firefighters and paramedics the ins and outs of a new wood-fire grill that he and his brother, Zach, of Teton Rental, donated to Jackson Hole Fire/EMS on Wednesday afternoon. The donated grill will replace a propane grill that’s been used to feed fire crews at Station 1 for more than 15 years as firefighters await the reconstruction of the downtown fire station.

Jake Vosika shows firefighters and paramedics the ins and outs of a new wood-fire grill that he and his brother, Zach, of Teton Rental, donated to Jackson Hole Fire/EMS on Wednesday afternoon. The donated grill will replace a propane grill that’s been used to feed fire crews at Station 1 for more than 15 years as firefighters await the reconstruction of the downtown fire station.

Realtors doing business in the Jackson area under the Century 21 flag topped all Century 21 offices in the state in sales during 2019.

Without providing a bottom line number, owner Ted Dawson said the Century 21 agents who work for the business sold “significantly over $100 million” of property during the year.

Besides the Wyoming honors, Dawson was named one of Century 21’s top 25 brokers in the United States.

It’s the first year for what the international Century 21 organization said will be an annual recognition of its associate brokers.

Dawson, in Jackson most of his life, became affiliated with Century 21 in July 2017 after running Spring Creek Ranch Realty starting in 2006 from offices on top of East Gros Ventre Butte, adjacent to Spring Creek Ranch and Amangani. He works in that office with associate brokers and co-owners Kent Hobson and DeNesha Anderson. Hobson has been with him for 12 years, Anderson for nearly 20. The Century 21 operation in Jackson includes five people, including those at a new office in town.

In an affiliate office in Teton Valley, Idaho, under the direction of co-owner Bonnie Etchemendy, there are four people, including Sarah Anderson, another part-owner; in a Star Valley office in Thayne associate broker and co-owner Sam Marquis leads a staff of seven.

Dawson said his Century 21 staff in the three communities sell all sorts of property but do have a strong presence in Amangani and Spring Creek, where there are a lot of high-end homes.

“Our Star Valley office probably leads in number of transactions,” he said, “but probably most of our dollar volume is up here” on the butte.

Dawson has been probably the real estate pro with the longest and closest association with development on the butte, and especially with Amangani, he said.

“With our 22-plus-year history up there, we average about 87% of transactions up there,” he said. “We have a solid exposure up there.”

Century 21 Real Estate does business in 84 countries, and has more than 11,500 affiliate operations that has about 131,000 associate brokers.

Other Century 21 offices in Wyoming are in Gillette, Casper, Laramie, Sheridan, Torrington and Rock Springs.

Clothing and household goods retailer Nest plans to celebrate its new West Bank location and do some good for the community at the same time.

With Teton Youth and Family Services, it will host opening festivities from 5 to 7 p.m. Thursday.

Snacks will be served, and, if you buy something in the store, 10% of the proceeds will go to Teton Youth and Family Services to benefit children and families.

“We had the opportunity to sell it to Noa Staryk of Nest, and I felt that I was putting it in good hands,” Belle Cose owner Jane Carter-Getz said in an email.

“It’s a great location with awesome traffic with the addition of Persephone, but my goal is to sharpen my focus into home, gift and fine jewelry, which is predominantly carried in our other seven locations.”

Belle Cose has made some changes in downtown Jackson. Last fall it moved its Town Square-area clothing store from a cabin on King Street to the Crabtree Corner shop that used to be By Nature Gallery. Originally that was to be a temporary relocation until Belle Cose opened a new “concept store” with ever-changing themes to the decor and merchandise displays.

The clothing store “has done so well that I’m going to keep it there,” she said.

The the new concept store will be located in the cabin at 81 S. King St. and opening this June.

The Jackson business started by Kelli Jones has designed patches for each of MDV Sports’ brands: Marker, Dalbello and Volkl.

“We are always looking for ways to highlight our brands and give MDV fans a way to show their appreciation for our products,” MDV Sports Marketing Director Geoff Curtis said in a press release. “Noso Patches represented a new, creative and high-quality way of doing that, so we jumped on board.”

Among the more than two dozen other businesses Noso has created custom patches for are Deuter, Arc’teryx, Dickies, Big Agnes, Dr. Bronner’s and Race Face.

The owners of Teton Rental donated a $1,400 Traeger grill to the Jackson Firefighters Association for firefighters to use for shift meals.

The grill will replace an old propane grill that’s been used at Station No. 1 for more than 15 years.

“It’s going to help us eat cleaner, and it would allow us to do a community driven event like a barbecue at the fire station,” said Kevin Spence, Jackson Hole Fire/EMS firefighter and vice president of the Jackson Firefighters Association.

The Vosikas wanted to donate a grill that’s big enough to cook food for a whole fire crew and one that’s easy to use. The grill has Wi-Fi so you can connect your cellphone and read the temperature and wood pellet level while your meal cooks, Zach Vosika said.

“You can control the temperature, and you can see the temperature of the meat,” he said. “And they’ll use the grill more often than a propane grill. It doesn’t have the chemicals and carcinogens of propane. The food tastes better.”

The grill will live at the temporary fairgrounds fire station until the new Station No. 1 is built. Spence said the donation was unexpected and appreciated because it’s something firefighters will use all the time.

When Blaine Gallivan (a name you may recognize from the 2019 Kings and Queens of Corbet’s) experienced a season-ending ski injury, he didn’t just sit around feeling sorry for himself. He started baking sourdough bread and selling it to his friends on Instagram.

Four years later Franny Weikert and Gallivan have a thriving bread and pizza business based in Victor, Idaho, and are hoping to expand.

In Season Woodfired Pizza caters weddings and events, slings pizzas at the summer People’s Market from a wood-fire oven and has a CSA-style bread-share operation with over 150 members. So what’s next for the duo? The community will help decide that.

Weikert and Gallivan hope to relocate their baking operation into a retrofitted ‘90s horse trailer but need $40,000 to do it. They are running a Kickstarter campaign to fund their new venture, which includes purchasing the trailer and a wood-fire oven, then retrofitting the trailer to house the oven, a refrigerated prep station, sink and storage.

Rewards for donating to the campaign range from handmade beeswax wrapping paper to a pizza party for up to 100 guests.

To be funded the pledged amount will need to exceed its goal by March 26. As of press time, the campaign had raised $32,212 from 241 backers.