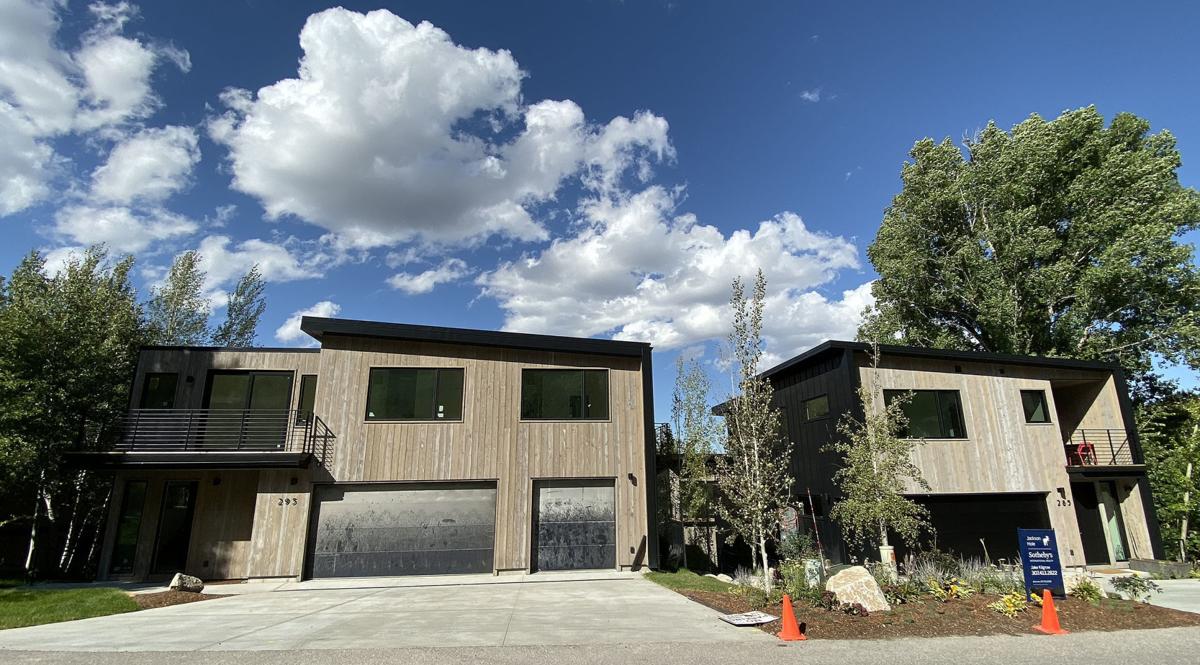 Marketed as the Snow King Village Townhomes, these condos on Pine Drive are some of the new style encouraged by a change in town zoning that encourages developers to add rentable apartments to new homes to ease Jackson’s never-ending housing shortage. 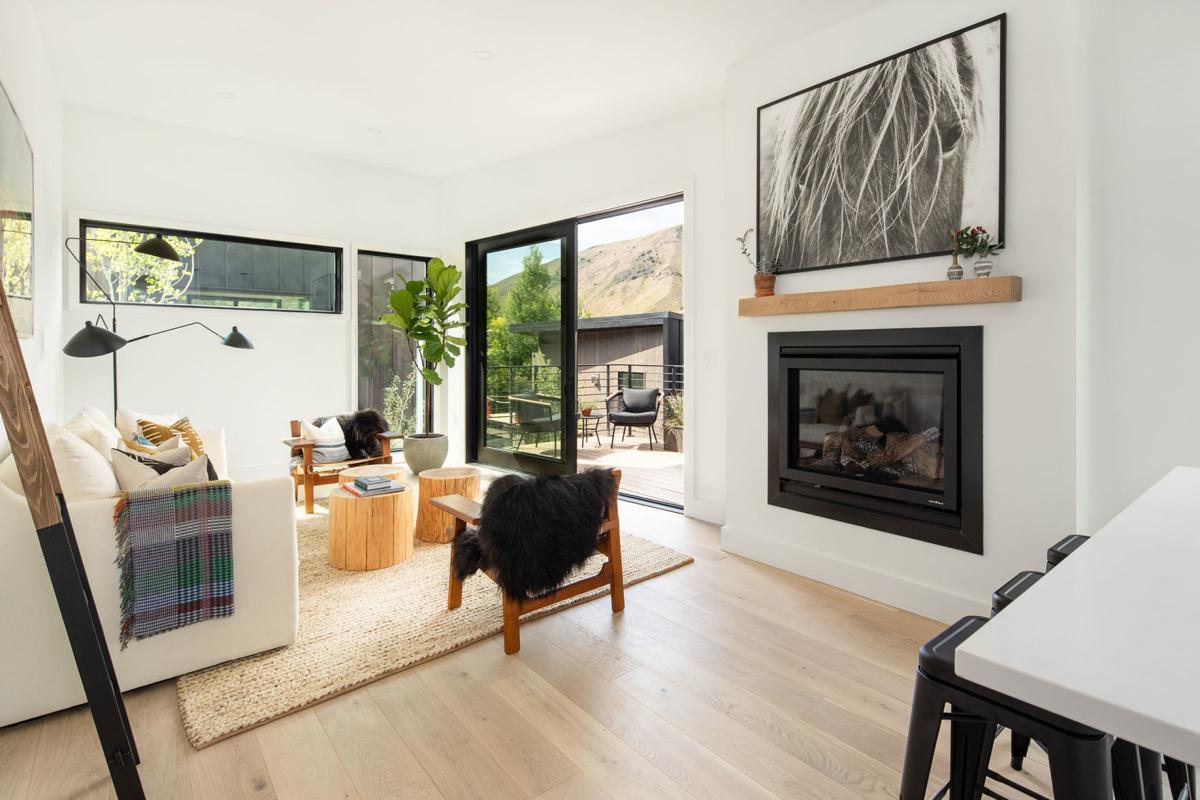 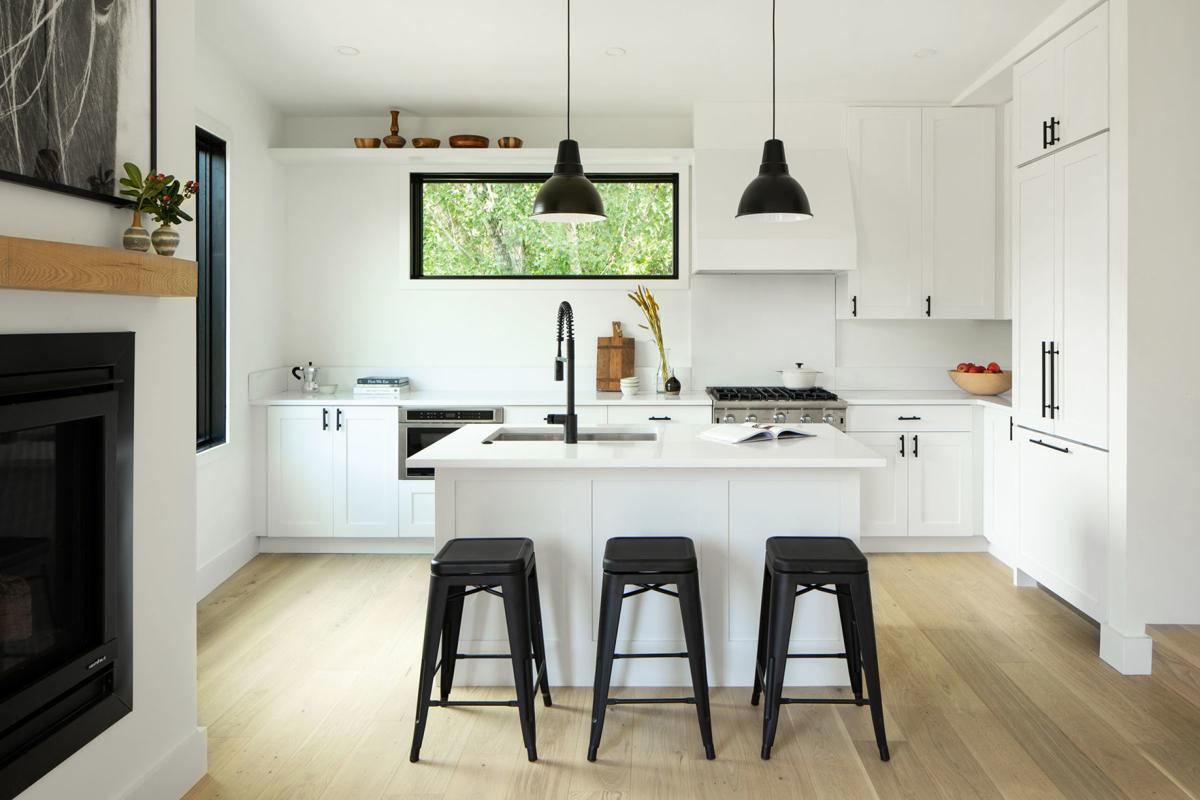 Interiors are bright and done in a modern style compatible with the “mountain modern” design of the exteriors. 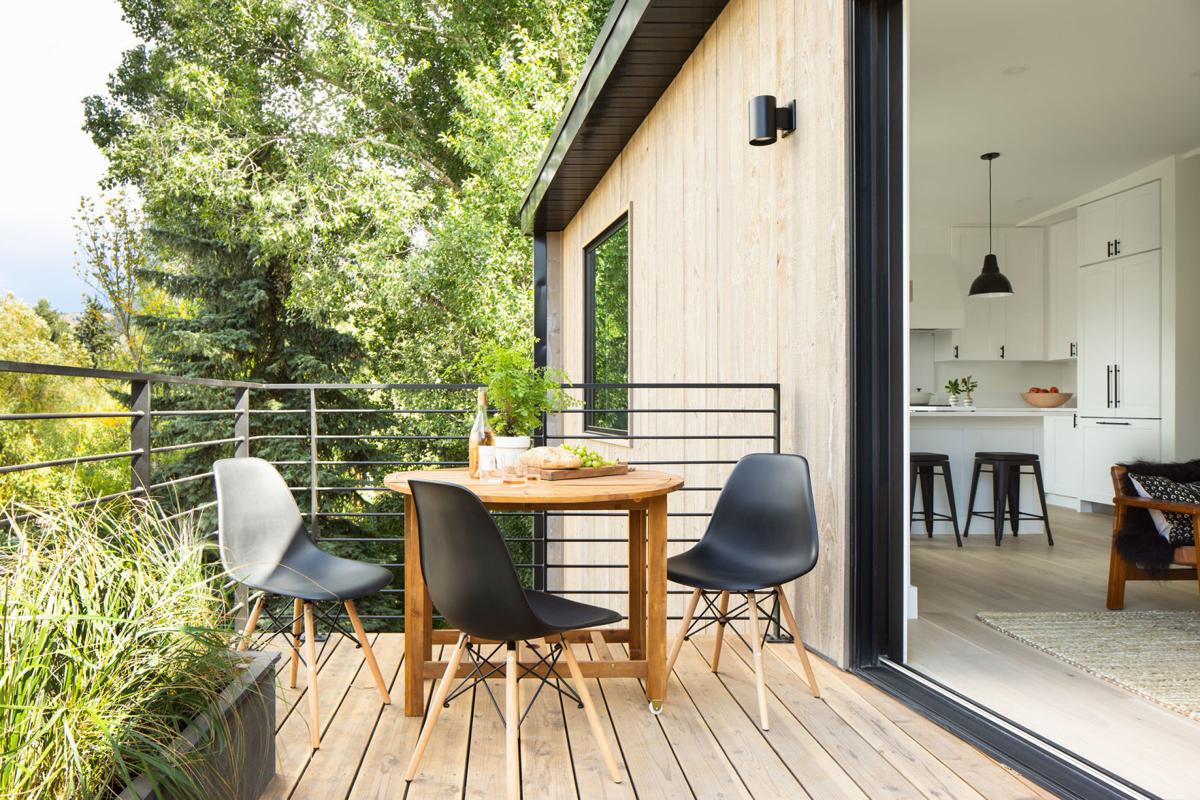 The units at Snow King Village Townhomes include not just a single deck, but several off the living areas, kitchens and bedrooms. They were designed by Mary Beth Coyne of Mary Beth Coyne Architecture. She works primarily in Jackson Hole and San Francisco.

Marketed as the Snow King Village Townhomes, these condos on Pine Drive are some of the new style encouraged by a change in town zoning that encourages developers to add rentable apartments to new homes to ease Jackson’s never-ending housing shortage.

Interiors are bright and done in a modern style compatible with the “mountain modern” design of the exteriors.

The units at Snow King Village Townhomes include not just a single deck, but several off the living areas, kitchens and bedrooms. They were designed by Mary Beth Coyne of Mary Beth Coyne Architecture. She works primarily in Jackson Hole and San Francisco.

Four new condos on a quiet Jackson street might not stand out in a busy real estate and construction market, but the units at 285 Pine Drive and Aspen Drive below it are part of an experiment.

Marketed as the Snow King Village Townhomes, they’re some of the new style encouraged by a change in town zoning that encourages developers to add rentable apartments to new homes to ease Jackson’s never-ending housing shortage.

Jake Kilgrow of Jackson Hole Sotheby’s International Realty, a partner in the project who has the listing, said the four ARUs (accessory residential units) are likely to be used as the town hopes, as housing, and not the kind of “grandmother unit” additions common in the past that often sit empty or used as guest spaces.

“I would suspect these will not sit empty given the housing situation,” Kilgrow said. “It’s good housing stock.

“The more bedrooms and housing opportunities we can create is a good thing,” Kilgrow said.

Builder Robert Huggins agreed the ARUs are unlikely to go unoccupied in a market where “we need housing.”

Huggins said new ARU rules are “hugely important” in a growing and redeveloping town, and “when we have the opportunity ... we do ARUs.”

The project is a collaboration between Huggins’ New West Building Company, which has been in business 14 years in the Jackson area, and Jackson Home Company. Jackson Home is a more recent creation that collaborates with New West and operates on a philosophy that gets it much deeper into creating housing than just putting up walls and roofs. Jackson Home Company includes design and interior decorating services and uses the work of Jackson photographer Tuck Fauntleroy and artist Fitzhugh Karol, who contributes wood and metal designs.

Mary Beth Coyne Architecture worked to maximize the number of units and square footage on the steep, challenging lots.

New West’s website shows about 30 houses it’s built around Jackson, predominantly in modern style. But most people’s exposure to its work has undoubtedly been interior work at the Persephone West coffee shop and restaurant in The Aspens and the Basecamp restaurant and grocery in Wilson. The firm has also built houses in Alpine and multiunit projects in California.

The four units of Snow King Village Townhomes were built on two vacant lots that span a steep slope between Pine Drive and Aspen Drive. It’s one of the town’s old residential neighborhoods, now a mix of some of the new Jackson with many cabins and small homes that have one foot in ramshackle territory.

Snow King Village’s style is the “mountain modern” that has come to dominate in Jackson redevelopment, though Huggins said he isn’t a fan of the term — nor is he against any other style.

“We’ll do a colonial house in Jackson if someone wants to build it,” he said. “We’re not pigeonholed to modern.”

But while the modern style is “not for every buyer,” it’s what more and more people want, he said, and “we do modern super well.”

He said that the style common in the late 20th century — the big log house — has mostly run its course in Jackson and that today “it’s the demographics that push us to modern ... it’s just the evolution of Jackson.” New West and Jackson Home, he said, are “aligned with a ‘let’s not build the house everybody had designed in the past’” approach — “we don’t want to just build the same old thing.”

“It’s the style people are looking for these days,” Kilgrow said.

Snow King Village units are big, bright and airy, built on several levels to accommodate the hillside. They’re furnished and decorated, equipped with appliances. There’s a lot of wooden floors and bannisters, windows and decks that provide big views.

Of the new townhomes the two biggest are seven-bedroom, five-bath condos of about 3,240 square feet. Those two are being offered at $2.895 million. Another unit has five bedrooms, the other four, both with four full baths. The five-bed condo is just under 2,400 square feet, the four-bed about 2,150. They’re listed at $2.395 million.

The two big units have three-car garages; the two smaller ones have two-car garages.

The units are all just being finished, meeting or slightly behind the planned 12-month construction schedule: “We’re pretty efficient,” Huggins said.

Three of the ARUs are just under 800 square feet, the maximum size allowed by town ordinance; the fourth is about 600 feet. They’re all built on the lower level of each of the four buildings, reached by their own outside stairways and with patios.

Though it’s up to owners to decide how to use the ARUs, Huggins and Kilgrow said they’re available housing. Huggins said they might be traditional granny units, or they might be for visiting children, for pilots, for au pairs, anything — but given the circumstances, he said, they could be on the market for housing.

Kilgrow said that if the condo owners aren’t full-time residents they might like to have someone living in the building so there’s a human presence there. He also said owners might appreciate the income a renter would provide.

He noted the advantages: The ARUs aren’t part of an apartment complex but are in an old, quiet, tree-lined neighborhood and are close to downtown: “It’s just a block to Snow King, and you walk or ride your bike downtown,” he said.

Kilgrow said he informally canvassed Realtors and heard that likely rents for the four ARUs are likely to be from $2,500 to $3,000 a month. It sounds high, he said, but it’s not out of line with the market. (See box.)

The modern style of architecture, and more density in older neighborhoods as they see a second generation of building, is likely to predominate, Huggins said. He pointed to the Gill Addition as the premiere example of that transition in Jackson. Old houses from the 1950s, ’60s and ’70s have in recent years been bulldozed and replaced by lot-filling buildings of a much boxier style.

“It’s just the evolution of Jackson,” he said, and a realization that for many people Jackson is no longer an Old West place. “Aspen, Pine, the area is evolving. ... I think all these different areas of Jackson are transforming.

“It’s going to change; this is embracing the change,” Huggins said. “I think it’s smart change.”

This version of the article has been amended to credit the development's architect. — Ed.

Your rent is how much?

People who have lived in Jackson for more than a few years remember their rent back then and choke when they hear what people pay now.

But it's not just that one kind of rental or one place is expensive: The cost of sleeping indoors is up everywhere in and around Jackson.

Likely rents of four ARUs at the Snow King Village townhomes of $2,500 to $3,000 a month aren't all that much different  than what it costs for comparable apartments in town. Here's a few examples:

• Blair Apartments,  on Jackson's west end, have for more than 20 years been the biggest bunch of worker units in town, with 294 units. Management recently was advertising one-bed, one-bath apartments of 645 square feet for $1,860. Two-bed, two-bath units of 950 square feet were bringing $2,340

• At the new Hidden Hollow project, the first 168 apartments were divided under an agreement with town government to preserve some as affordable and workforce housing, both with restrictions on tenants and rents, and free-market units. The 14 affordables, for low-income renters, had rents from about $440 for a studio to three-bedroom units at about $1,770. The 59 workforce units, with government limits on who can live there but no cap on price, were initially advertised at rents from $1,645 a month for a one-bedroom unit with one bath of 64 square feet to $3,500  for three-bedroom, two-bath units of 1,160 square feet.

New West Building Company owner Robert Huggins said he'd heard of an ARU of less than 800 square feet on East Hansen that was rented for about $3,000. He predicted his four new ARUs will rent quickly if the condo owners choose to go that way.

Ed. note: The price of a two-bedroom unit at Redmond Rentals has been amended in this article.