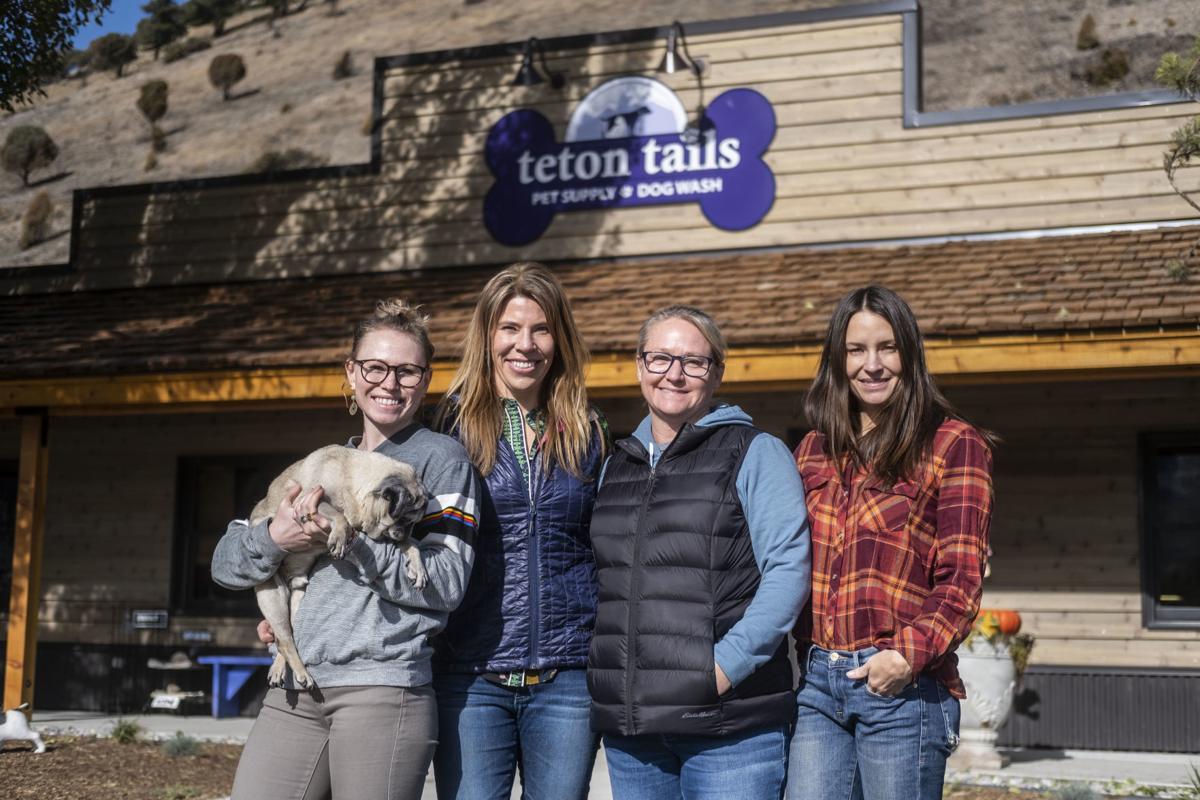 Teton Tails owner Amy Vignaroli, second from left, poses with some of her crew outside the business’s new home at 515 W. Broadway: Rebecca Wooldridge, with shop dog Pete the Pug in her arms, Stacy Gries and Lily Iguchi. 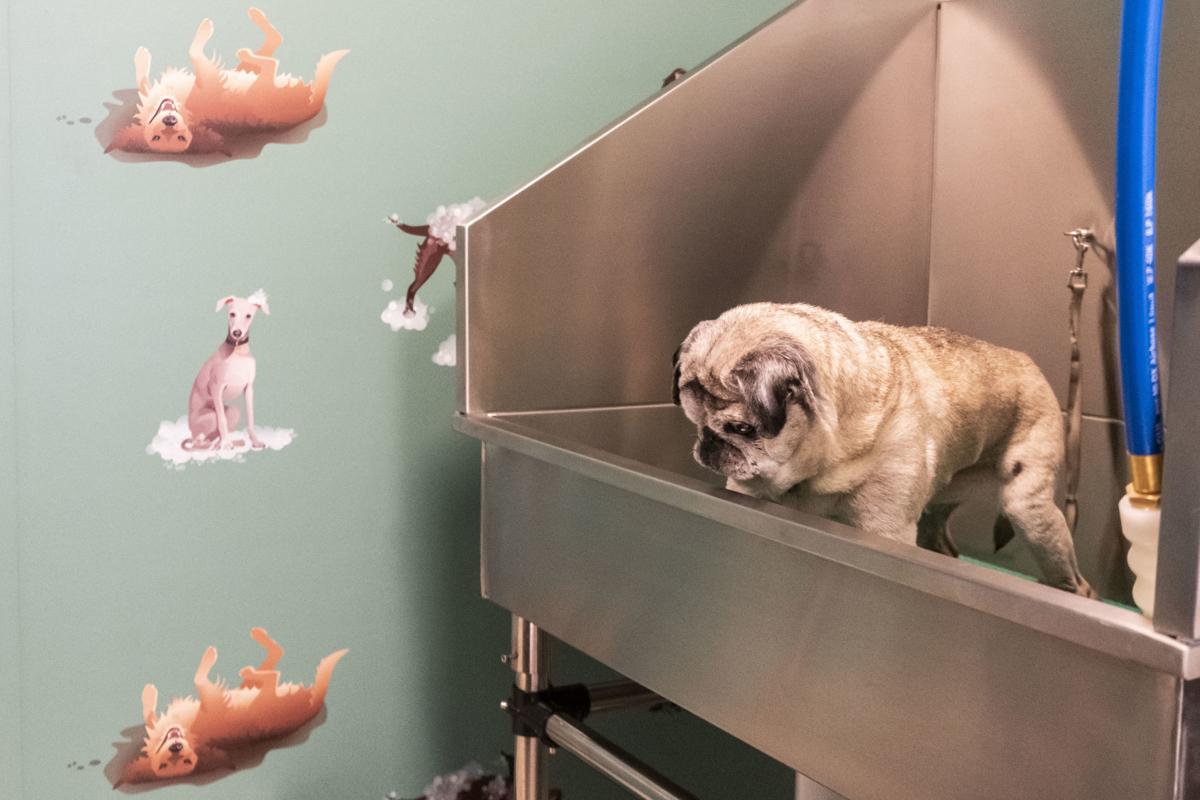 Pete provides perspective on one of Teton Tails’ new indoor wash stations. The wash room has two areas, one for smaller dogs and one for those that are medium to large. In its new home Teton Tails is working with 4,400 square feet, compared with only 2,600 at its former location on Pearl Avenue. 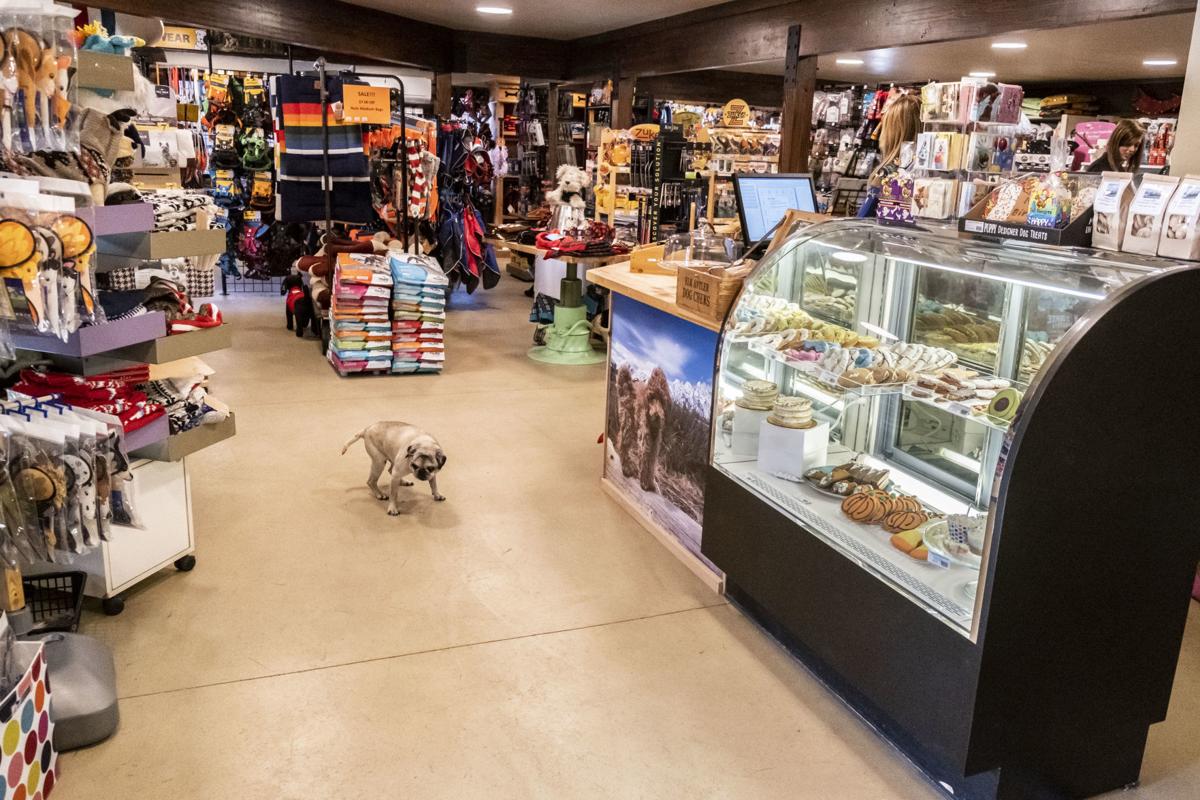 Pete makes the rounds near the shop’s new pastry case, full of tasty baked treats for canines. Close-in parking out front makes it easier for Teton Tails customers to tote their purchases to their cars. 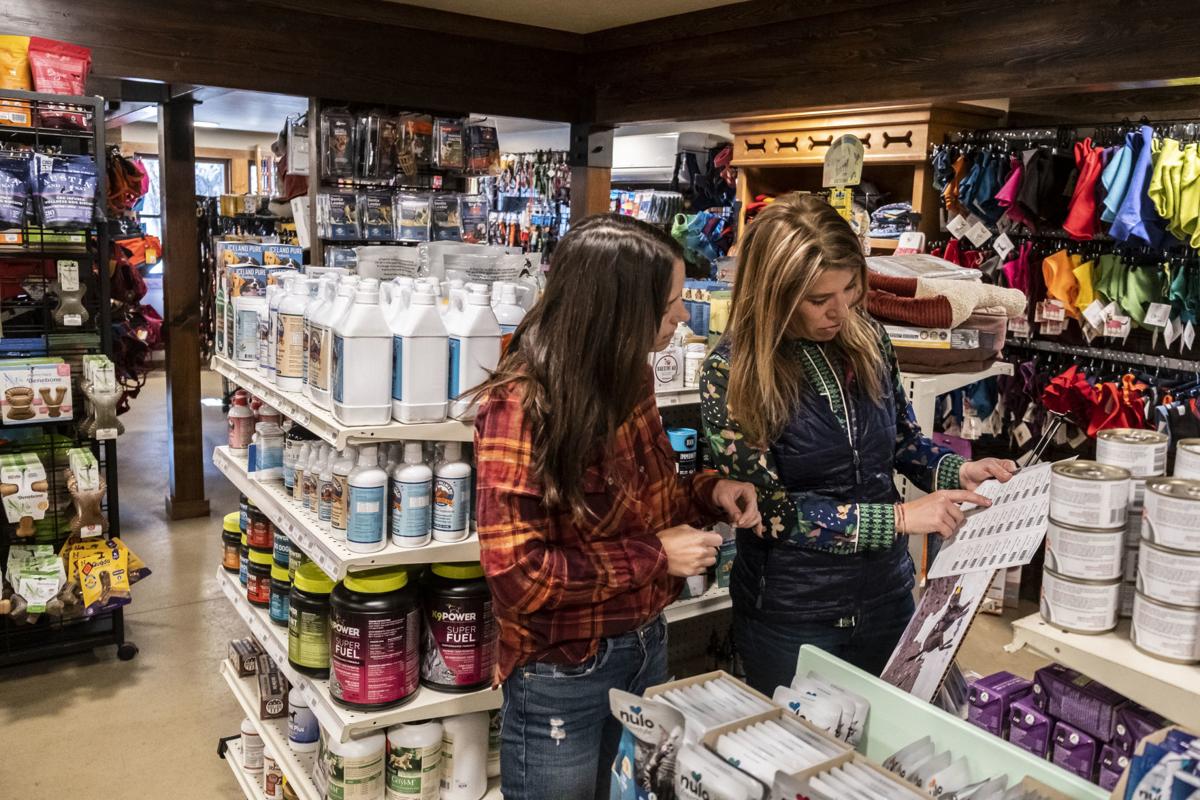 Teton Tails owner Amy Vignaroli, second from left, poses with some of her crew outside the business’s new home at 515 W. Broadway: Rebecca Wooldridge, with shop dog Pete the Pug in her arms, Stacy Gries and Lily Iguchi.

Pete provides perspective on one of Teton Tails’ new indoor wash stations. The wash room has two areas, one for smaller dogs and one for those that are medium to large. In its new home Teton Tails is working with 4,400 square feet, compared with only 2,600 at its former location on Pearl Avenue.

Pete makes the rounds near the shop’s new pastry case, full of tasty baked treats for canines. Close-in parking out front makes it easier for Teton Tails customers to tote their purchases to their cars.

Dogs coming through the doors at Amy Vignaroli’s new location have looked confused: Accustomed for years to visiting the Teton Tails store on Pearl Avenue, they suddenly find themselves going somewhere else and finding an even bigger assortment of stuff they love.

That’s what happens when you move and your canine customers must change their routine.

One woman told Vignaroli that her dog child was dismayed after he “dragged us to the old store and nobody was there.”

“But now they’re figuring it out,” Vignaroli said.

So, apparently, are the dog and cat people who have been Teton Tails customers since the store opened on Pearl next to the post office in 2004, two years after it began in a tiny, out-of-the-way spot near Gaslight Alley. Vignaroli said that even after almost two decades in business she’s seen a jump in traffic since she moved. She closed her Pearl location on Friday, Sept. 13, and opened the doors of the new place that Monday after a marathon moving effort.

The new location, at 515 W. Broadway, was the longtime home of Bubba’s Bar-B-Que but had been vacant for nearly 10 years since Bubba’s moved across the highway. The 1969 building was remodeled during the summer by owner Dick Martin.

Despite the drawback of moving from a familiar location, Vignaroli said better visibility and a lot more parking have made the switch a smooth one. Old customers have found her, and she said she’s seen some tourists who didn’t find her before and now are drawn in just because you can see the place from Broadway, especially with the big dog bone-shape sign.

The old Teton Tails space, next to the downtown post office, was 2,600 square feet; the old Bubba’s is 4,400. Besides the space and being visible from the road, Vignaroli’s neighbors are established draws like Wendy’s, Ace Hardware and TJ Maxx.

It’s the room, though, that’s most important: “We outgrew that old space,” she said, “and in the new place everything has a home rather than being crammed in.”

The Pearl Avenue shop’s limited street-only parking, which sometimes made it a hassle to get in and out, Vignoroli said, is replaced by wide-open and close-in parking for deliveries in the back and customers in the front.

“It was not fun for customers to carry 40-pound bags of dog chow to their cars in the shadows of a north-facing building” on Pearl, she said.

The new Teton Tails has collars and coats and booties and beds and balls and toys shaped like dinosaurs, hedgehogs, octopuses and even the Humptee Trumptee chew that modern pets must have. She carries an assortment of Ruff Wear clothing for dogs, along with Pendleton coats for dogs who prefer to go natural. And if Teton Tails doesn’t have a million leashes, it’s certainly closer than any other leash seller in Wyoming.

Even after years in the business, Vignaroli said she’s stunned by just how much stuff Americans will buy for Rover and Fluffy.

“When I go to trade shows it’s amazing how many products there are,” she said. “I had no idea when I started. I started modestly, but people love to have a selection. ... and for many their pets are like their kids.”

The old location’s outdoor dog wash — strictly a summertime operation — has been replaced by an indoor wash with two sinks sized for your small-to-normal canines or your big dogs. Among the options currently offered is pumpkin spice dog shampoo, if your dog doesn’t mind smelling like a latte. There’s a $20 upcharge for skunk washes — washing dogs that have been skunked, that is, not for washing your skunk.

Vignaroli said it normally takes three people to run the place. She has hired a couple of new employees and two longtime workers, Stacy Gries and Sarah Scully, have come along in the move. Regular dog helpers Copper and Harvey are also still on hand, as is top dog Pete the Pug, though at age 16 he’s transitioning from customer relations to sleeping most the time.

Vignaroli worked six years for Berlin Architects before starting Teton Tails in 2002. In her first two years the business had about 400 square feet next to Thai Plate, not enough even for a startup.

“I had kibble delivered to the house on East Hanson, and I’d schlep it to the store it was so small,” she said.

Back then her only competition was Valley Feed and Pet, farther south on Broadway from her new spot. It went out of business in 2008.

Vignaroli keeps the business involved in other aspects of the pet world. She’s a member of the board at PAWS of Jackson Hole, the local animal welfare society, and is involved in its annual Tuxes and Tails fundraiser. She donates cat litter to the Animal Adoption Center and is a partner with Nulo dog food to keep the rescue dogs at Jackson Hole Mountain Resort fed. She hopes after she settles in that Teton Tails can work with shelters for fostering and adoption events.

All the toys and sweaters and beds in the world aren't important when dinnertime arrives. Here are the brands of dog and cat food stocked by Teton Tails: