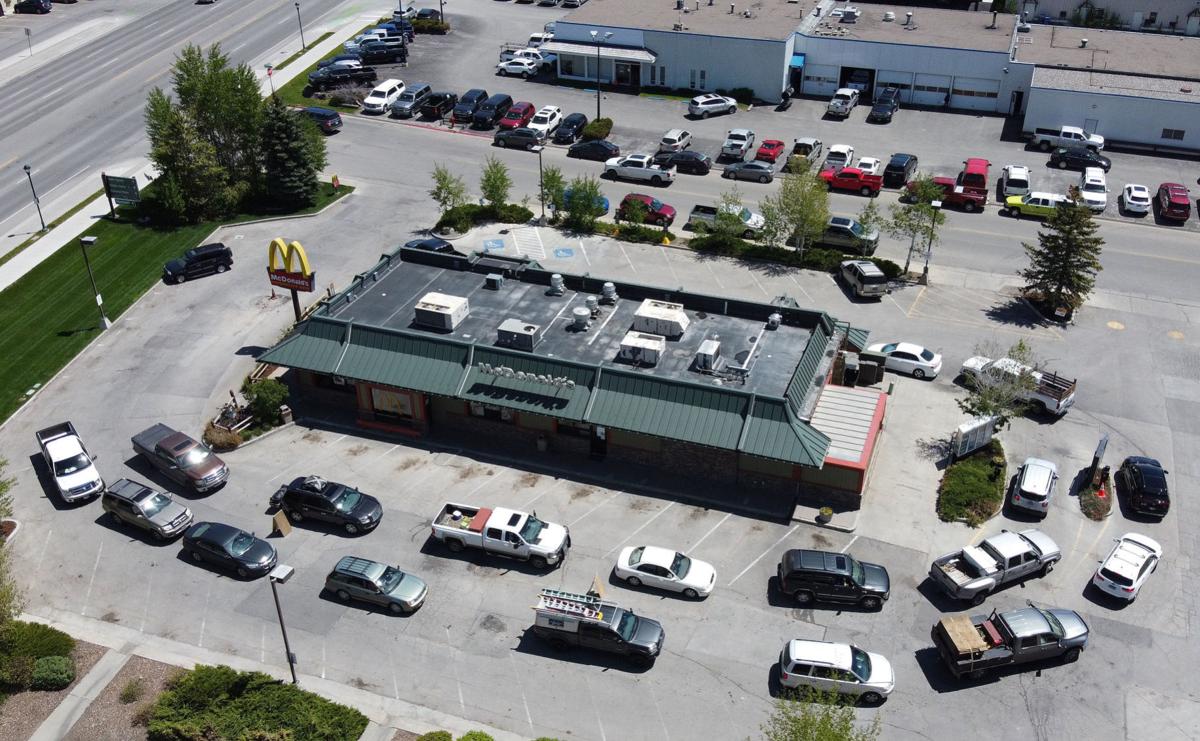 The line for the McDonald’s drive-thru stretches around the building during the lunch rush at noon Friday. With lobbies and dining rooms closed due to coronavirus worries, drive-thrus have seen increased volume. 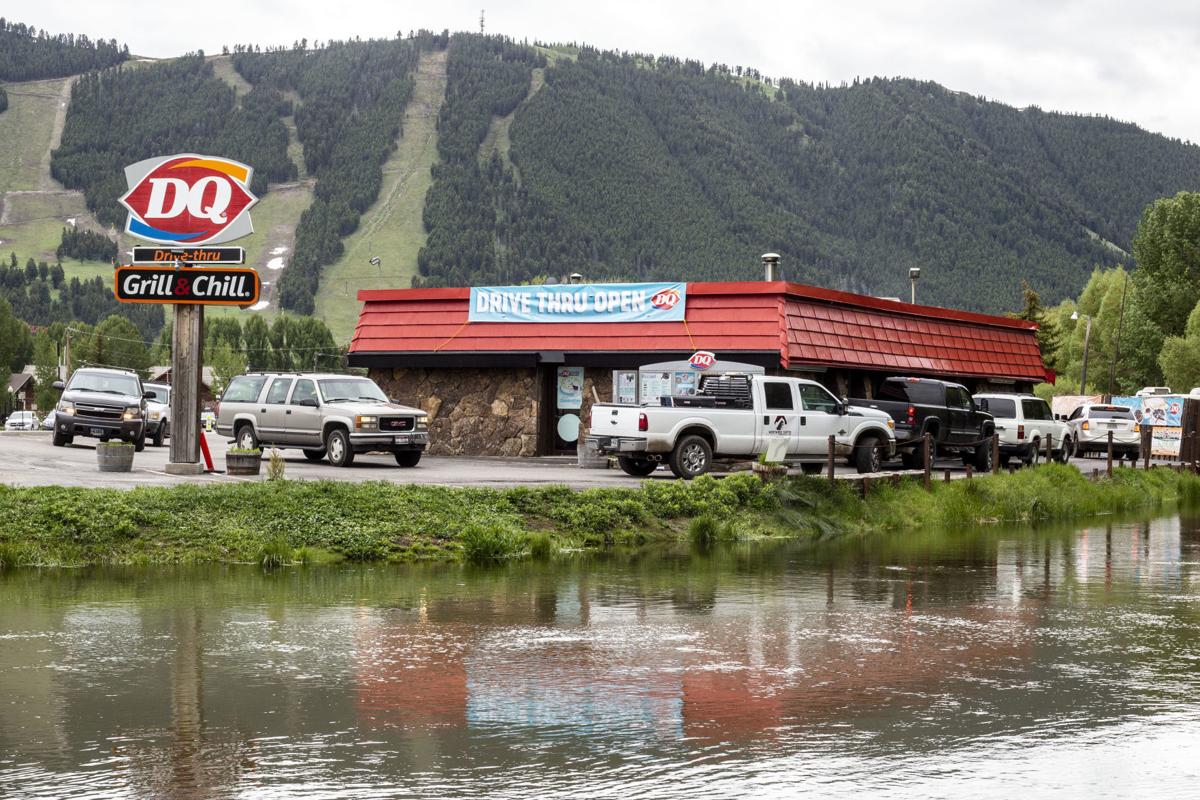 Customers wait in the drive-thru line Monday afternoon at the DQ Grill and Chill. Jackson’s fast-food restaurants have suspended dine-in service due to the COVID-19 pandemic.

The line for the McDonald’s drive-thru stretches around the building during the lunch rush at noon Friday. With lobbies and dining rooms closed due to coronavirus worries, drive-thrus have seen increased volume.

Customers wait in the drive-thru line Monday afternoon at the DQ Grill and Chill. Jackson’s fast-food restaurants have suspended dine-in service due to the COVID-19 pandemic.

Customers who never get out of their cars kept the grills hot and the cash registers ringing at two Jackson restaurants during the height of the COVID panic.

All because you could drive up to a window and have your lunch handed to you in a bag.

Having drive-thru as part of their model didn’t prevent them from feeling the coronavirus shutdown, but being set up to serve people in vehicles was a big deal at McDonald’s and the DQ Grill and Chill.

“It allowed us to do business,” said Darrell Hawkins, owner of the DQ at the north end of town. “We were fortunate we have a drive-thru.”

It was the same at McDonald’s, near the busy “Y” intersection, said 17-year owners John and Alice Finley: “We feel pretty fortunate,” John Finley said. “We stayed operational and were able to support our people.”

Operators of the Wendy’s in Jackson declined to participate in this story on order of The Wendy’s Company, which owns or franchises more than 6,000 Wendy’s worldwide. (See “Where’s the beef?” sidebar.)

At McDonald’s and the DQ, drive-thru customers not only kept the restaurants open, but also did two other things: Drive-thru kept employees working and gave customers something they wanted during a time when they were being asked to do without many other comforts.

“They appreciated the fact that we were there to serve them because they didn’t have as many options,” said John Finley.

McDonald’s co-owner and wife Alice agreed: “They’re getting something they got before that gave them comfort, particularly the children,” she said.

But if being set up for drive-thru when other restaurants — what just about everyone would consider the fancier places to eat — was a welcome situation, it wasn’t a business panacea. Fast-food operators said their business fell sharply when their dining rooms were ordered to close to slow the spread of the novel coronavirus. Here’s what the operators had to say about their shutdown experience:

• DQ Grill and Chill. Hawkins bought the place in 1998, five years after it ended 28 years as an A&W. He said his 100-seat dining room, with fireplace, was “quite a draw” for his business and “to have that shut down has really affected our revenue.”

Though he normally offers drive-thru, he always figured that it was a smaller part of his business than at Wendy’s and McDonald’s, that “our dining room has always been a bigger part of our business” than it was for the competition.

He put the pre-pandemic division at about 65% of customers coming inside and 35% driving through. With the dining room closed, he said, he was seeing about 325 cars at the drive-thru every day.

That’s been boosted by some unusual interpretations of “drive through”:

“We’ve had pedestrians at the drive-thru, and people on bikes,” he said. “We’ve never experienced that before.”

Hawkins said the virus also hit the DQ in a way that affects other fast-food places less: Starting in May and reaching a peak in June and July he is a regular stop for buses headed into town after they tour through Yellowstone and Grand Teton national parks. The usual was three buses a day, and an average of $150 in business from each bus: “You do the math,” he said.

“All that business no longer exists,” he said, noting not only the virus but a chill in U.S. relations with China, the country that provided most of the bus riders. “I don’t know that it’s going to come back this year. ... I don’t know about next year, given relations.”

Hawkins usually has six people working during busy times, and recently had only 10 total on staff, in spite of paying an hourly rate nearly half again as much as the $9 an hour he pays at his Riverton DQ.

• McDonald’s. Built and opened for business in November 1982 by Bob Jaycox, the restaurant was bought by the Finleys in 2003. They met in 1970 in Little Rock, Arkansas, while working at a McDonald’s.

The Jackson McDonald’s has seen as many as 1,000 cars on a summer day, but a typical busy day is closer to 800, the Finleys said. They usually figure that 63% to 65% of their businesses is drive-thru, though it’s often closer to 50-50 in the summer when road tourists are eager to get out of their cars, stretch their legs and use the restrooms. The restaurant has 116 seats inside.

The virus shutdown was “definitely an impact on our overall business ... a significant hit,” Bob Finley said. At best business was down just 10% some days, but “other days we were off 25, even 45% over the same day the previous year.

“Not everyone who used the dining room or who ordered in and carried out shifted” to the drive-thru, he said.

McDonald’s has a core of year-round workers of 35 to 40 and a summer buildup to about 75. It usually has 18 to 22 people working during peak times, but that’s been down to 12 or 14 during the slowdown.

But there was enough business, Alice Finley said, that “everyone was able to keep working.

“Early on, everyone’s hours were adjusted down from close to full time by, in most cases, 20% to 25%. ... but we’ve been able to ramp back up” since the initial downturn.

Two weeks ago, John Finley said, he saw “volumes going up” from the worst of the shutdown but “still compared to last year we’re still down maybe as much as 20%.”

The Finleys and Hawkins said they were operating under strict instructions from their parent companies about what they could do and how to do it. There’s a heavy emphasis these days on constant cleaning, they said.

Continuing worry about a resurgence of the coronavirus and protecting customers and workers is likely to make McDonald’s and DQ drive-thru-dependent as least through the summer.

DQ’s Hawkins said the parent company’s rules would certainly require him to devote a person to full-time sanitation work even if he opened his lobby and not the dining room.

“It would require quite a staff to have even the lobby open,” he said, “to clean tables and restrooms all the time.”

Even if the pandemic seems to be cooling, Hawkins said he is cautious and reluctant to have customers inside. Deciding to open the lobby or dining area is something “we’d like to see others do first, see how it goes ... we’ll respond to the market.”

“Our No. 1 priority is to keep our employees and customers safe,” he said. “I don’t see any sense in inviting issues” by bringing customers inside if he can serve them outside.

It’s a situation he thinks may become more common in all restaurants for as long as COVID-19 can’t be prevented or cured. More drive-thrus everywhere, he said, are likely to be “a preferred route for consumers to use because of the ease, the convenience, the relative safety.”

Longtime Wendy's manger Doug Hutmacher initially agreed to talk about his business, but between a first talk and an interview he was reminded that the policy of The Wendy's Company is that store operators can't talk to the press. All inquires must be handled at headquarters.

Hutmacher helpfully provided a phone number. Several messages left seeking an interview were not answered. An email elicited an automatic reply that offered a March 26 press release that said Wendy's had responded to the pandemic by closing dining rooms and reemphasizing cleanliness. It said that overall sales for the corporation were down 20% the week of March 22  and that drive-thru business had grown to 90% of all sales at Wendy's outlets.