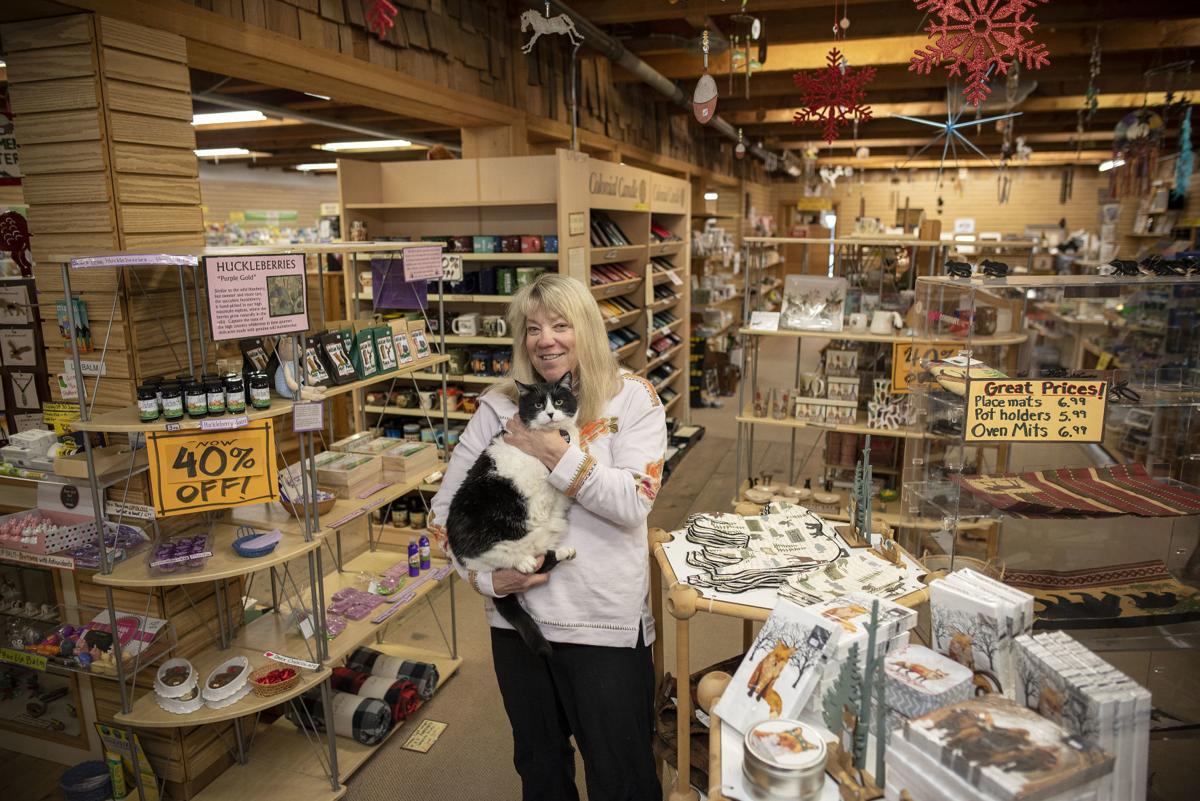 Brooke Bullinger founded Gifts of the Earth 45 years ago in a 300-square-foot space on the Jackson Town Square. Over the years she has expanded the shop to about 4,500 square feet today. She is also on her third store cat, an 8-year-old shelter kitty named Rena who will now live in Bullinger’s home with an old dog. 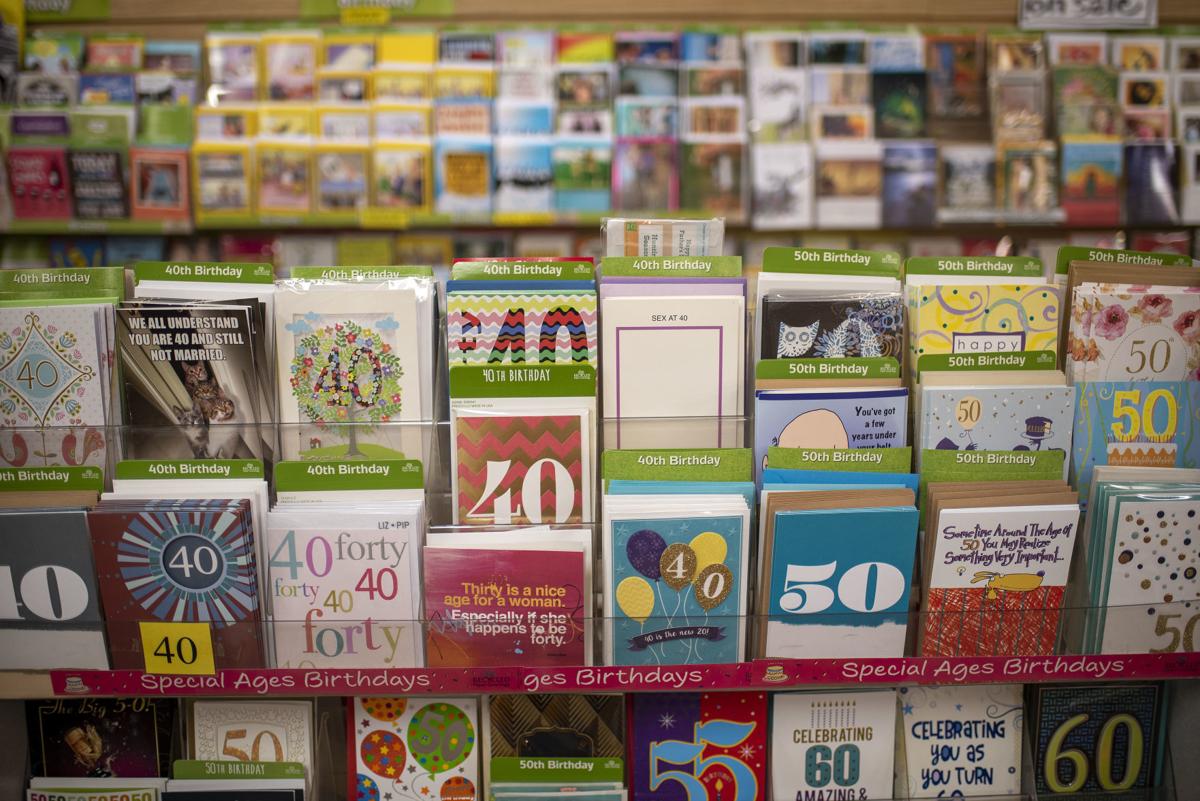 Gifts of the Earth has thousands of unique cards for any occasion. “People still send cards, and that’s what everyone comes in for,” Bullinger said.

Brooke Bullinger founded Gifts of the Earth 45 years ago in a 300-square-foot space on the Jackson Town Square. Over the years she has expanded the shop to about 4,500 square feet today. She is also on her third store cat, an 8-year-old shelter kitty named Rena who will now live in Bullinger’s home with an old dog.

Gifts of the Earth has thousands of unique cards for any occasion. “People still send cards, and that’s what everyone comes in for,” Bullinger said.

Gifts of the Earth has been the place to go for a goofy gift, wrapping paper and ribbon to decorate it and a funny or weird or tasteless card to carry your message.

But downtown Jackson’s best hidden emporium of the offbeat, the useful and the surprising will close early in 2020 after 45 years of being open every day except for Thanksgiving and Christmas. Owner Brooke Bullinger is about to retire, and the recently sold space will be remodeled.

The woman who has spent probably 99% of the days since 1975 in the store will be able to indulge in travel, her big love, but is split between the routine of her business home and the freedom she will have.

She anticipates being able to “go to remote places,” but admits it’s going to be odd.

“It’s been something that’s kept me going; it’s been my life for 45 years,” Bullinger said of Gifts of the Earth. Without the routine of work and customers, “I’ll be lost — it’ll be a shocker.”

Despite spending her life there, Bullinger didn’t see her career coming: “This isn’t what I intended to do with my life,” she said. “I thought I would live with the pygmies.”

That unusual idea came from her girlhood in Milwaukee, where she was fascinated by faraway and mysterious places — the Amazon, Borneo and Africa. She majored in African studies in college and has been there 14 times over the years. But on a trip to Jackson in 1975 she stopped at the top of Teton Pass and looked down at the valley. She had that feeling.

“I said, ‘I want to live down there in a cabin on the creek with two horses,’” she said.

Wondering how she would make a living, she decided on a shop that sold the arts and crafts made by local people. She borrowed $3,000 from her mom and rented 300 square feet on the top floor of a Town Square building newly built after a fire destroyed its predecessor. The top floor featured six small spaces along a corridor, a mini mall that also had a deli, a ski shop, a Christian bookstore and a music shop.

None of those lasted long. That was due, Bullinger thinks, to the fact that they were all up two flights of stairs and not obvious from the East Broadway sidewalk. She also had another advantage in her business model that made her successful while others failed.

When the landlord said he might sell the entire floor as businesses came and went, he told Bullinger, and, to protect and expand her own operation, she ended up buying it all.

That made her owner of 4,500 square feet of Town Square retail that many people don’t suspect exists.

Bullinger has aimed to have the unusual but useful for customers. Her biggest seller over the years has been greeting cards, for every occasion or for no occasion except to amuse or say hello.

“People still send cards, and that’s what everyone comes in for,” she said. “That’s what we’re known for.”

She recently had a customer who, anticipating the end of the business, paid $211 for 50 cards, “stocking up.”

Right behind cards is gift wrap, then the huge trove of other things on the floor: the posters, the stationery, stuffed animals and candles, picture frames, lotions, photo albums, refrigerator magnets, mugs and cups, souvenir socks and on and on. During the 1990s Beanie Baby craze, Bullinger made her share of money on that silliness.

Arlene Gauthier worked at Gifts of the Earth for 35 years starting in 1980 and was recently back for a few weeks to help out. She called it “a tiny little store with funky little things.”

“She’s had so much stuff you couldn’t walk in without buying something,” Gauthier said. “You’ve got to buy something.”

The place isn’t the shiny or cool that characterizes a lot of Jackson retail, and Bullinger thinks that has made it comfortable for customers.

“It’s not a fancy place,” she said, “and people appreciate that.”

It’s also appealing to customers, she said, that if you were there in 1997 and came back today you’d probably know where everything is. Moving stuff around has never been a goal in itself.

Despite the popularity of the store, it was her mostly accidental purchase of the space that is putting Bullinger in a good position to retire and travel.

“Nobody would ever want the business,” she said. “The space is what’s valuable.”

Gifts of the Earth is upstairs at Cache Creek Square, above Beaver Creek Hat Company. Bullinger is offering 40% off as the shop’s last holiday season approaches. Until its last day it’s open, as always, seven days a week — except Christmas.

Gifts of the Earth is one of those places where a shop cat seems likely. And there have been some.

Peter moved in after being found in the alley, wounded and sticky with tar. He lived in the store for 18 years.

Valentine was found frostbitten and run over. He used to roam neighboring businesses like Jack Dennis and The Bootlegger. He was napping once when a kid pulled his tail and Valentine scratched him. The kid’s dad threatened to sue. Valentine rubbed against the leg of a police officer in an attempt to sway the investigation. Ultimately Valentine went to live on a dude ranch.

The current cat is Rena, a black and white girl who keeps track of activity. Rena will retire from retail to live with an old dog at Bullinger’s house.

I first discovered Gifts of the Earth 38 years ago. My family vacationed at a guest ranch every summer and I was finally old enough to drive into town on my own. I spent a long time browsing, finally settling on a poster of the Tetons. (That poster accompanied me to college and later on, to my first apartment.) The next summer, as an employee at Flagg Ranch, Gifts of the Earth was where I found a fantastic gag gift for our staff "Christmas in August" party. Two years ago, I was finally able to return to Jackson, and I climbed the stairs once again, 36 years later. Thank you, Ms. Bullinger, for the memories, and I wish you much happiness in your retirement!