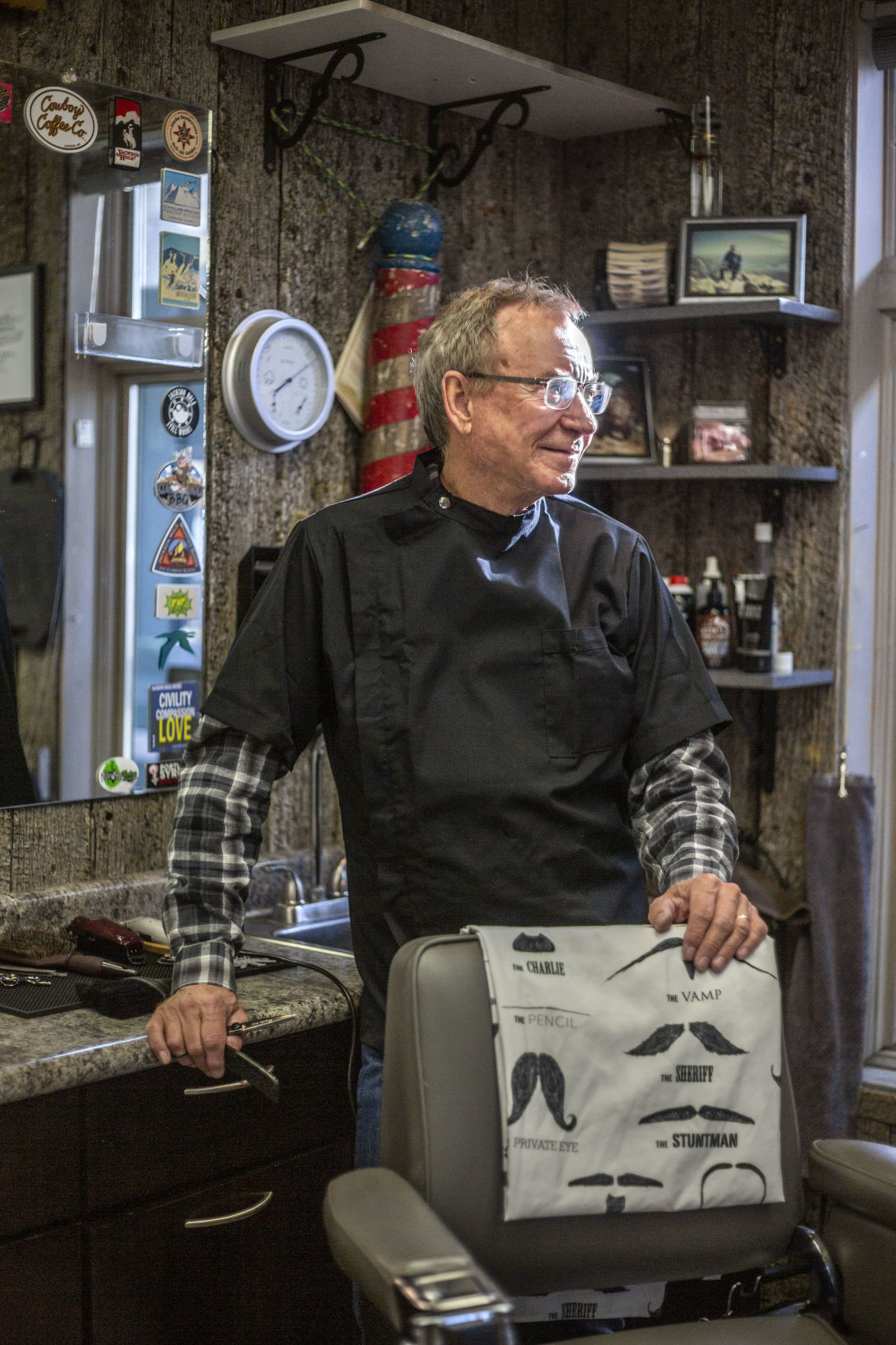 Longtime Jackson barber Mike Randall has co-owned Teton Barber Shop with Debbie Bancroft since 1993. He recently sold his share to Tanya Crocker and will step down to working one or two days a week. 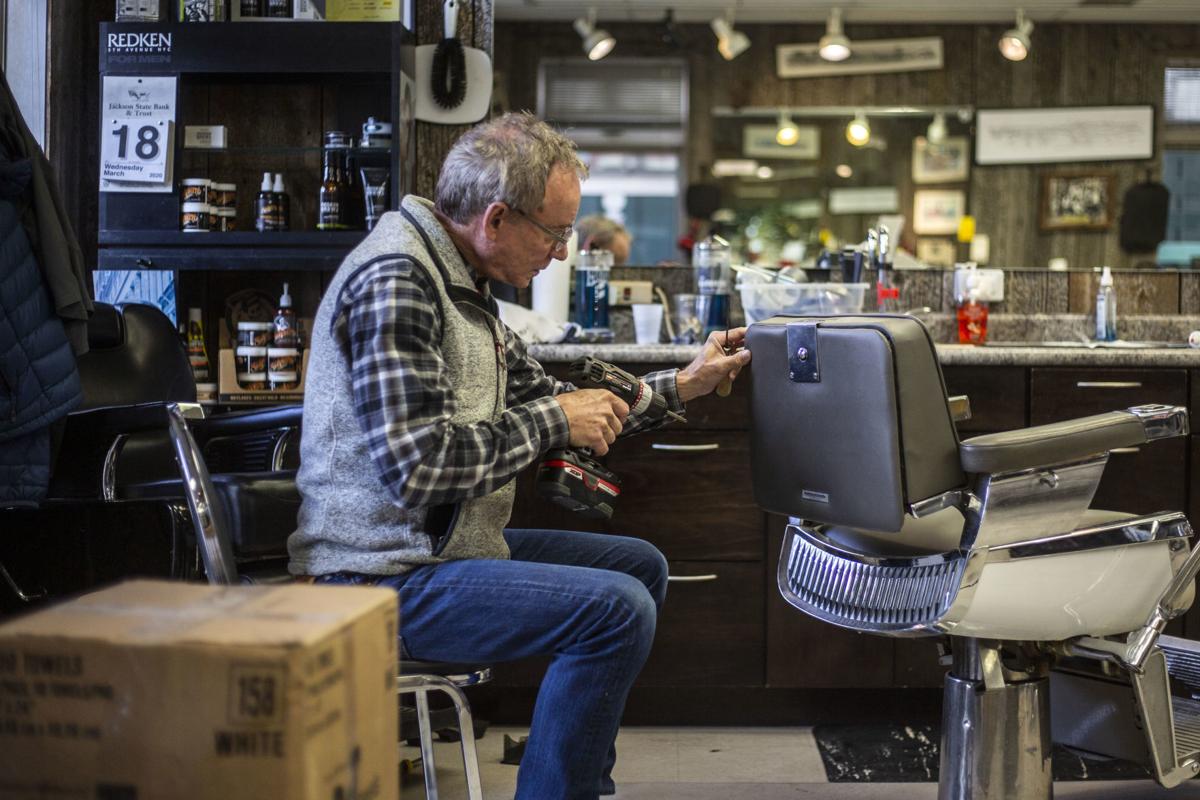 Longtime Jackson barber Mike Randall has co-owned Teton Barber Shop with Debbie Bancroft since 1993. He recently sold his share to Tanya Crocker and will step down to working one or two days a week.

Walk-ins have always been welcome at Teton Barber Shop, but from here on out if you wander in and want Mike Randall to cut your hair you might have to wait a few days.

After 38 years standing behind people and shortening their locks, Randall has sold his half interest in the shop. He’ll be in a day a week, maybe two if they need him.

But he’s concentrating now less on hair cutting and more on cutting back the time he spends barbering and engaging in the other traditional parts of his ancient and honorable profession — the bad jokes, the gossiping, the political snark.

Randall started cutting in 1983. He guesstimates he might have administered 190,000 haircuts. When he began you could have your ears lowered for $5.

“I turn 65 in July and I had a barber, Tanya Crocker, who was interested in buying my part of the partnership,” Randall said. “It just seemed like the appropriate time.”

Randall graduated from high school in Riverton in 1973 and the next day moved to Jackson to apprentice in a restaurant kitchen. He worked at Snow King, was a waiter and then a bartender at various places, including The Rancher.

He had met his future wife, Patti, who worked at the bank. They found that the hours of bankers and bartenders did not match up conveniently for a young couple. But it was that hassle that led him to pick up the clippers.

“She worked at Jackson State Bank and got a three-day weekend,” Randall said of Patti. “I was going to work at 6 and going until 2, so we didn’t see a lot of each other.

“So I was whining to a girl who was cutting my hair about our scheduling difficulties, and she said, ‘Mike, you should go to barber school.’”

He and Patti decamped to Denver in 1981, where he spent a year learning his way around a head at Colorado Barber College. Then they returned.

Reid Sanderson had bought the shop from Loyd Hudson in 1974; Hudson had been the main barber in town since the early 1960s. There were other barbers before, including one who was known as “Two-Stroke Lou,” Randall vaguely recalled, who did business near the old Crabtree Hotel. He recalled a couple of other names, but it turns out no one is keeping close track of Jackson barber history.

Randall worked for Sanderson for 11 years, until Sanderson died in 1993. Randall and fellow barber Debbie Bancroft bought the business from Sanderson’s family. They moved to the current location within a year — first sharing space in the adjacent snowmobile shop, now Knit on Pearl, for several months when preparation work on the barber shop was slow.

“The street in front was all dug up for some work, and Earl walked across the ditch on a 2-by-12 board, sat down and said the same thing he always said,” Randall recalled. “He said, ‘Put on a number 2 and ride it hard.’”

Over the years one mainstay of the shop has been its regular Barber Shop Polls. Customers probably cast more votes in the shop than they ever did at actual polling places. Whether candidates or issues, the customers — mostly men, of course — had a good record of predicting the success or failure of most issues. Barber shop patrons, though, did throw Barack Obama out of office in 2012 to usher in the Romney administration.

Randall once cut the hair of Vice President Dick Cheney in the morning and Blues Traveler singer John Popper at the end of the day. He remembers cutting the hair of young men who were bound for basic training and having older customers who were waiting slip him the money behind their backs.

Once a woman from Bondurant who was losing her hair because of cancer treatment was in one chair to have her head shaved while a Park City snowboarder was in another donating his shoulder-length tresses to a group that turned such gifts into wigs for cancer sufferers. Both were named Terry.

And there were people who came in regularly for years whose names just never seemed to come up.

“There was that guy who used to call square dances in the park, I think he worked at the dam,” Randall said. “I never knew his name.”

Randall said part-timing will let him stay in the barber shop loop.

“My wife has a theory that the big problem for me will be not being in the mix, not knowing what’s going on around town,” he said.

“But I’ll still be there one or two days a week so I can keep up. And besides, it’s always nice to have a few dollars in your pocket.”

Those are some great stories. Must be thousands of them. Probably a book waiting for Mike to write. Sat in his chair many times. Love that place. A true Jackson icon.

I love you sir! I love your kindness. Your caring and I'm extremely happy that you will now be able to get out and enjoy life. Thank you. From the bottom of my beart, for keeping an eye on me and my well-being.. I never say much back, but I see and feel the intent and it's all love with your sir!

This is a great man!

MIKE! Thank you for many great trims and lots of good news! You've been cutting my hair since Reid - when I've been out of town I would save it up until I got back to you! Good luck with your new schedule and time -be happy! / Phil Hocker

Ah Mike, you are a gem! All my best as you ease into this silliness called Retirement!