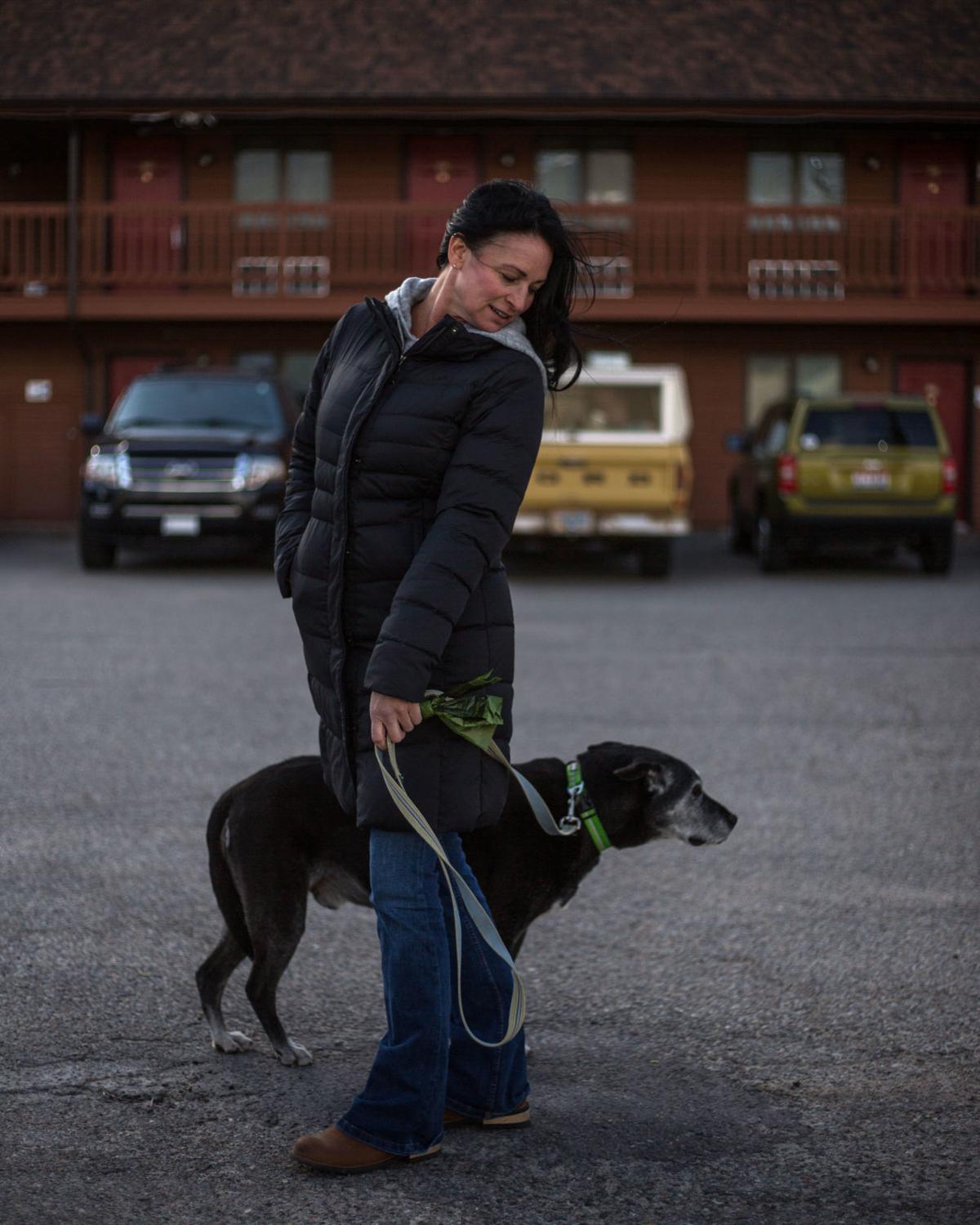 Dawnmarie Haines, of Colorado, walks her dog, Kamba, last Wednesday at the Flat Creek Inn north of Jackson. Haines and her husband have spent months on end in Jackson hotels over the past five years while in town for the plentiful construction jobs. 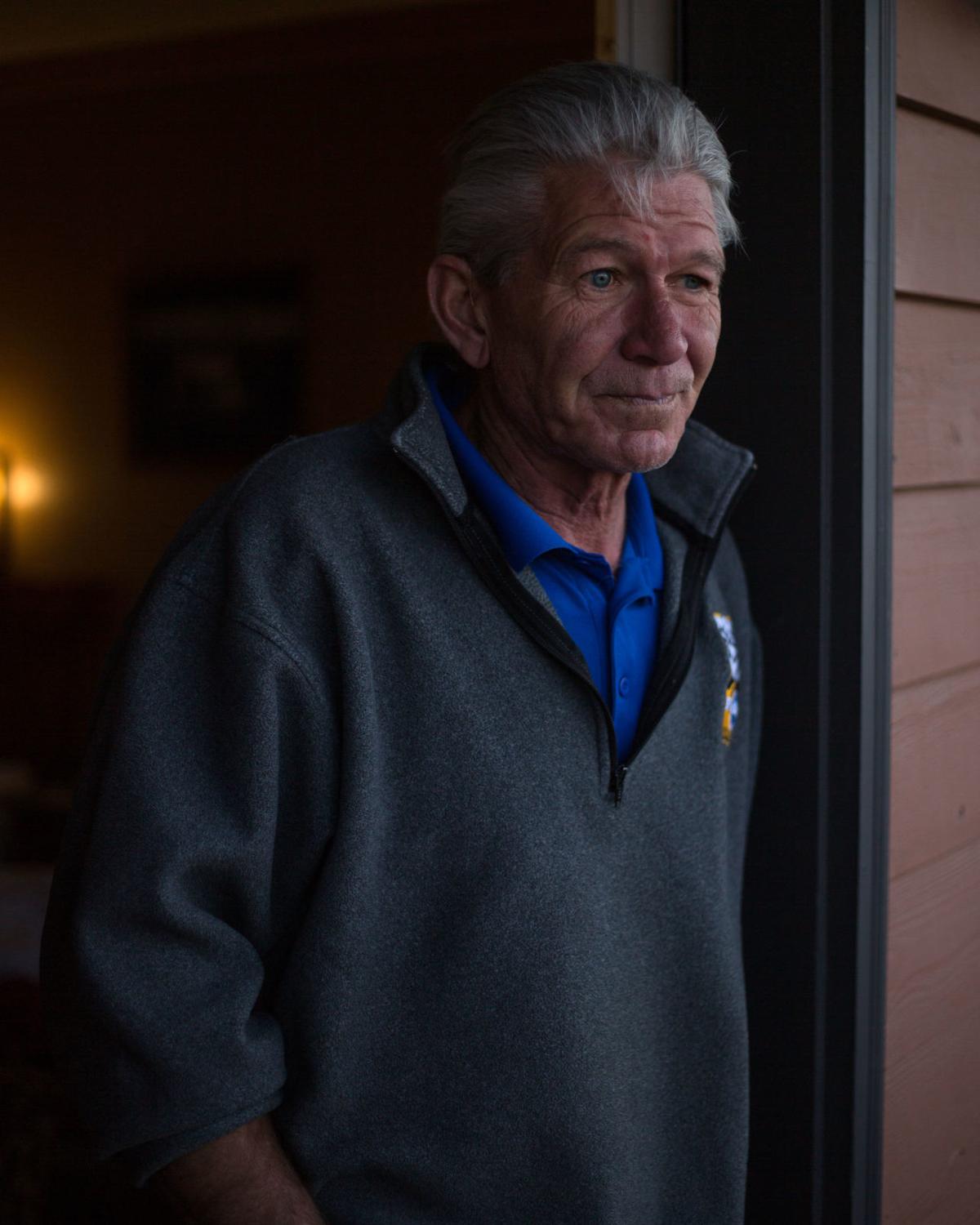 Bob Brown, of Idaho Falls, outside his room at the Flat Creek Inn. Brown’s work has brought him to Jackson for four consecutive days a week since 2007. Staying in hotels while he’s here helps him avoid having to commute back and forth more than 700 miles each week. 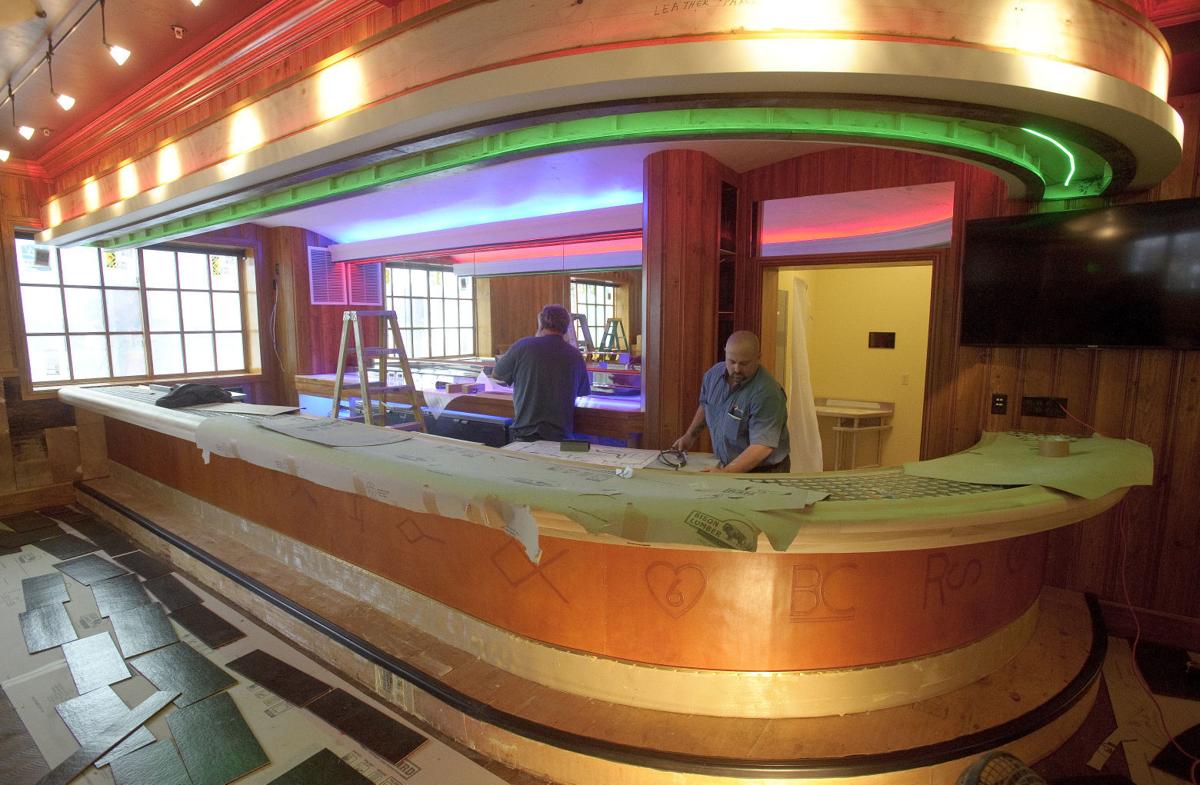 Renovations to the Wort Hotel’s Silver Dollar Bar were made in 2015. The bar's closure has allowed for renovations to restrooms and a deep-clean of the bar top's famous silver dollars.

Three nights a week over the past 13 years Bob Brown has lived in various Jackson Hole hotels.

The Idaho Falls resident works as a specialty food vendor at Albertsons. Instead of driving 180 miles roundtrip over two mountain passes every day he’s chosen to do it once a week and live in Jackson during the work week.

“It works for me,” Brown said as he chatted with the News&Guide from his stoop at the Flat Creek Inn.

Brown has been living at the Flat Creek Inn since early March and is one of only a handful of guests there. It’s cheaper than renting an apartment or house part time.

“They’ve been great about keeping winter rates and letting us stay,” Brown said. “Or else I would have been screwed.”

Kyle Eggett, manager of the Flat Creek Inn, said the hotel usually stops allowing long-term stays at the end of April but is extending them through at least June because those are the only guests they’ve had during the COVID-19 pandemic.

“We have had lots of cancellations,” Eggett said. “May so far isn’t looking good.”

Several Jackson hotels like the Elk Country Inn and 49er have also extended their long-term stays for essential workers and business. Phones are ringing off the hook at their front desks, but it’s mainly guests canceling summer reservations.

A manager at the 49er said the summer outlook is “looking pretty ugly.” A lot of their cancellations have been entire tour buses full of European visitors.

For people like Brown, and his neighbor Dawnmarie Haines, who works in construction, hotels staying open during the pandemic has helped them keep their jobs.

“It’s been so quiet,” Haines said. “Usually there would be cars lined all the way down the parking lot.”

The average occupancy rates the last month or so have been 5% to 10%.

Eggett said with no way of predicting what summer tourism will be like he’s had to try and guess how many seasonal employees to hire.

They usually hire 33 summer employees and this year he said he will likely hire only 19.

“Our seasonal staff need to know what’s going to happen,” Eggett said, “but we don’t know.”

Eggett said everything depends on what the nearby national parks decide to do.

“I anticipate once things open back up people will be out of money,” Eggett said. “There won’t be people looking for hotels, but some locals will be coming by who are going to the parks maybe.”

Aside from occupancy being in the single digits, Eggett has had trouble getting his usual cleaning supplies for the few housekeepers still working.

“I ordered wet wipes last month, and they won’t be here until June,” he said. “For us the biggest frustration is getting the chemicals we need.”

The Flat Creek Inn is family-owned. It also has a gas station and convenience store next door, which has remained open.

“Ownership has reassured me we will stay open. We are nimble enough to adjust where we need to, but we don’t have all the insurance that a big hotel chain would have,” Eggett said. “The other concern is we get through the summer and COVID-19 comes back.”

“When the governor sent out the essential worker order we did have to ask a small number of guests to vacate the premises,” Waldrop said. “We were committed to flattening the curve. We limited it to essential workers.”

During the initial response to the pandemic, Teton County District Health Officer Dr. Travis Riddell recommended visitors return home “by the fastest and safest available means,” and that those considering a visit remain home.

Those health orders and recommendations have been loosening up, allowing many businesses to resume operations with safety precautions and modified operations. (See story in business, C1.) Gov. Mark Gordon will hold a press conference today to announce updates to statewide health orders, which still limit gatherings to fewer than nine people and ban dining inside restaurants. Grand Teton and Yellowstone national park superintendents are also planning to discuss their reopening plans today during a call with gateway businesses.

With confirmed cases of COVID-19 in Teton County trending downward, Riddell said Friday that easing restrictions is possible because St. John’s Health now has capacity to handle an increase. Teton County has reported no new lab-confirmed cases in the past nine days.

“The end of stay-at-home orders here does not mean the pandemic is over,” Riddell said. “It means there is currently room for you in the St. John’s ICU.”

Although The Wort Hotel had to ask guests to leave when cases were trending in the other direction, the downtown hotel stayed open to house essential workers, like airline crews.

“We did that for a couple reasons,” GM Waldrop said. “We had a responsibility to the community to help keep air service and keep some of our employees around. We wanted to do that whenever possible.”

Since The Wort also houses the Silver Dollar Bar and banquet rooms, it’s been extremely quiet at a location that’s normally the center of social events in Jackson.

“There hasn’t been a lot of public coming through at this time, but we are very diligent to have extra cleaning routines guided by the CDC,” Waldrop said.

His staff has taken advantage of the closures by remodeling the Silver Dollar Bar restrooms and doing deep cleaning projects to give employees something to do.

“We were able to partner with a contractor who fit us in on a moment’s notice,” he said. “And we’ve tackled projects at the [Million Dollar] Cowboy [Bar] like sanding the floors and sanding the Silver Dollar Bar and polishing the silver dollars with a toothbrush. Everything is spick and span.”

“The health and safety and welfare of our guests and employees is at the forefront of everything we have done and will continue to do as we move forward,” he said. “We are ready to get back to work in a safe manner. We believe we will as an industry and a community bounce back from this.”

Anna Olson, CEO and president of the Jackson Hole Chamber of Commerce, said the chamber has been impressed with how local hotels are weathering the storm.

“What I do know is the hotels that have stayed open have been incredibly thoughtful about taking extra measures to modify operations,” she said, “to continue to allow people to stay while also providing a protected environment for their employees. That’s the difficult balance.”

The chamber has been encouraging tourists to make careful decisions as they look toward summer travel plans, like only booking trips that allow them to follow health guidelines.

“That takes a lot more thought than just showing up, which is that tourists do normally,” Olson said.

Olson said the chamber has been reminding potential visitors who call that even though Jackson Hole has wide open spaces, they still have to return to a hotel room.

“The message in April was, ‘don’t come here,’” Olson said. “And I’m not sure May has gotten much further than that.”

“Some hotels have been waiting 72 hours between reusing rooms,” she said. “And what about 50% occupancy? These are real challenges.”

“We are getting questions about Memorial Day,” Olson said. “They want to know what will be going on, and we don’t know.”

I am unaware of any time that SJH had no room in the ICU during the last two months. I am aware that Dt. Riddell at first reported 80% of COVID patients were being hospitalized, and then revised that number down to less than 20% because it turned out most of the admissions weren't for COVID. Only 11 people were admitted for COVID. Why 40 some others were admitted because they might have COVID were subtracted out in the final report to the State Dept of Health (who didn't understand why SJH was hospitalizing so many more patients than anyone else). And I've yet to understand why those people were hospitalized but Bill Sweney was sent home - what was the difference? This constant change in protocol and reporting shows what new territory this was for SJH. All patients to be ventilated were sent out of town, while Dr. Beaupre was claiming they could handle over 50 people on ventilators. They just didn't have enough PPE. Since they admitted over 40 people who were not-COVID, but SJH thought they were COVID, a great deal of PPE was probably wasted because the doctors couldn't differentiate between COVID symptoms and the seasonal flu. Not unexpected due to the newness of COVID, but something that should be a matter of discussion to avoid making the same mistakes in the future. Should we have 20 patients that actually need hospitalization due to COVID, it's going to be difficult to try and fit in another 80 "just in case" they might have COVID. That kind of admission policy will again raise a red flag with the STATE. An 80% admission rate indicates a problem originating at SJH.