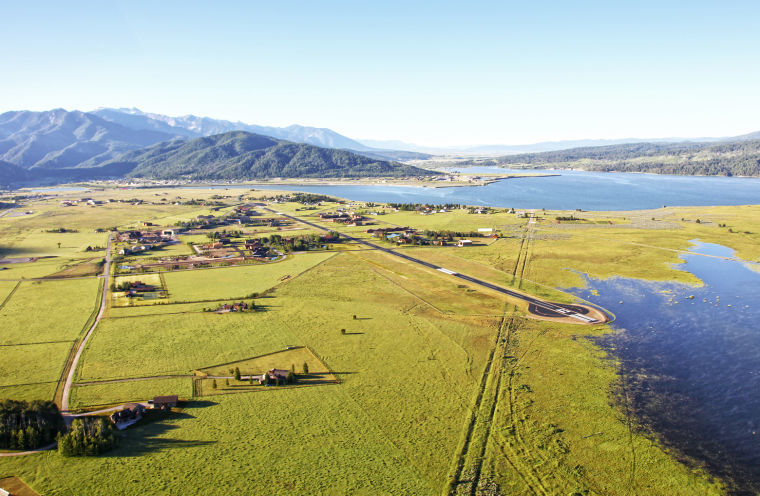 The Alpine Airpark, pictured here in 2014, is among developments in Star Valley that are increasing the average cost of a home. Growth is steady, planners, bankers and real estate people say.

The Alpine Airpark, pictured here in 2014, is among developments in Star Valley that are increasing the average cost of a home. Growth is steady, planners, bankers and real estate people say.

It’s well recognized that Jackson Hole’s exorbitant cost of living has for decades created a commuter class, a growing sector of the workforce who collect wages in the valley and make their home elsewhere.

By far, the two biggest bedroom communities are Teton Valley, Idaho, and Star Valley — the only significant populations of people within 50 miles. Somewhere around 40% of people in the workforce are hopping in their vehicles or on a START bus at the end of the workday, and they’re creating a ripple effect over the Tetons and down the Snake River.

“I heard last week that the northern end of Lincoln County is the fastest growing part of the state right now,” Brad Hovinga, the regional Wyoming Game and Fish Department supervisor, said last month in Powell.

Hovinga spoke to his agency’s board of commissioners. His comment was made in the context of adding options for housing Game and Fish workers, potentially building in the northern gateway to Star Valley.

County planners and real estate agents reached by the News&Guide couldn’t say whether Star Valley was Wyoming’s “fastest-growing” reach right now, but everyone affirmed that a transformation is underway and that Jackson Hole’s influence is in the middle of it.

“Of the town of Alpine’s working-age population, it seems like 60% are commuters,” Lincoln County Planning Director John Woodward said. “There are probably 1,200 commuters a day that go your way.”

“If [Jackson Hole] was a single employer,” he said, “it would be three times bigger than the next largest employer in Star Valley.”

Coming out of the Great Recession, northern Lincoln County (which is synonymous with Star Valley, from Smoot to Alpine) was slow to recover and hit hard by foreclosures, Woodward said. From 2014 to 2016 the number of single-family homes being built hovered in the 70- to 90-a-year range, but for the past three years it’s topped 100 new structures a year. Growth has been most frenetic in the north — closest to Jackson — and especially in Alpine.

Between the Targhee Place Apartments and a new 24-plex behind the convenience store at the Highway 89-26 junction, Alpine has added 100 rentals in the last two years.

“The whole valley is about 13,000 population,” Woodward said, “so that’s significant.”

More is coming. Early this year St. John’s Medical Center closed on a 5.9-acre parcel in Alpine Meadows for $1.35 million. The vision was to add 80 units, housing that would attract more hospital staff to Alpine. At the time of the acquisition, 90 employees already lived there or farther south in Star Valley.

All those added heads — and annexations that have tacked on new developments to Alpine town limits — are making a big difference.

“It’s an exciting time to be in Alpine,” Woodward said. “There’s been a 30% to 40% increase in population through annexation.

“That’s huge,” he said. “It could be $750 per head based on historical sales tax collections. ... For a community that doesn’t have a street department, that’s a big deal.”

An annual report produced by the Bank of Star Valley puts numbers to the shifting demographics and economics of the narrow, historically agricultural valley. It also makes some predictions for the future, estimating population growth by averaging past trends.

“It is estimated that Star Valley’s population will approximately be 14,000 in 2020 and will continue to grow to an estimated 16,000 in 2030,” the 2018 edition of the report says. “Bottom line, it is clearly going to continue to get more and more crowded in this small valley.”

“Affluent people are choosing to invest in Star Valley and are making it their home,” the Bank of Star Valley report says. “Most of this type of upper-net worth population growth used to take place in the Jackson market, not Star Valley. ... The result has been the creation of areas within Star Valley which are unique, fairly exclusive, and provide the foundation for more of these people to move here.”

Expensive homes in neighborhoods like the Double L Ranch and Afton and Alpine airparks — fly-in communities with runways — are weighing significantly on the average cost of a Star Valley residence. Sotheby’s real estate agent Carlton Loewer, a former Lincoln County resident who now lives in Hoback, said list prices in northern Star Valley actually fell 16% this year, from $682,000 to $572,000, but that’s because one big sale can skew the average.

“Alpine is becoming unaffordable — or it’s not becoming, it is unaffordable — unless you want a really tiny home,” Koontz said. “It’s supply and demand. There’s not enough housing in Jackson, period, and even wealthier people are moving toward Alpine.”

Prices fall significantly as you drive from one of Star Valley’s nine incorporated towns to the next going up the Salt River. In the central valley — centered around Thayne and Star Valley Ranch — the average listing is sitting at $336,000, Loewer said. Toward Afton and the southern valley the average is $314,000, a 16% bump from the year before.

Although apartments have sprung up in the towns, 90% of all the new homes are being built in unincorporated Lincoln County, Woodward said. Those outlying areas now are home to half of Star Valley’s population.

“The character is changing,” Woodward said. “People want open, agricultural space, but with a short growing season that’s almost impossible. A lot of landowners, that’s their savings account. Their 401(k) is that land, and they will eventually sell to development.”

Koontz, an East Coast transplant, hopes that his adopted home retains some semblance to the valley that attracted him there five years ago.

“You’ve got to have a plan, you just got to,” Koontz said. “We should know from Alpine on down what the view is 25, 50 years from now. What are these towns going to look like? How are we going to have clean water, and how can we sustain efficient growth?”

It’s debatable whether the regulatory mechanisms are in place to steer Star Valley on a course that achieves its community goals, but Lincoln County does have a comprehensive plan. The 19-page document was last amended in 2006. The essence of the plan’s goals have many parallels to the vision Teton County spelled out in its own comp plan: preserving open space, creating affordable housing and protecting natural resources. Federal grant money is being pursued that would fund an update to the natural resources portion of the plan, Woodward said.

Loewer noted that building is much easier than in Teton County, though it’s also getting more expensive.

“I’m not picking on Teton County, but those areas [in Star Valley] have planning departments that are a lot easier to work with and a lot less regulatory,” Loewer said. “It’s much easier to build what you want in Lincoln County than in Teton County.”

Plus, he said, the drive’s not all that bad.

“It’s 40 minutes from Alpine Junction to the Smith’s light,” Loewer said. “I did it for 11 years.

“I think Alpine is poised to grow,” he said, “and I think there’s an opportunity down there.”