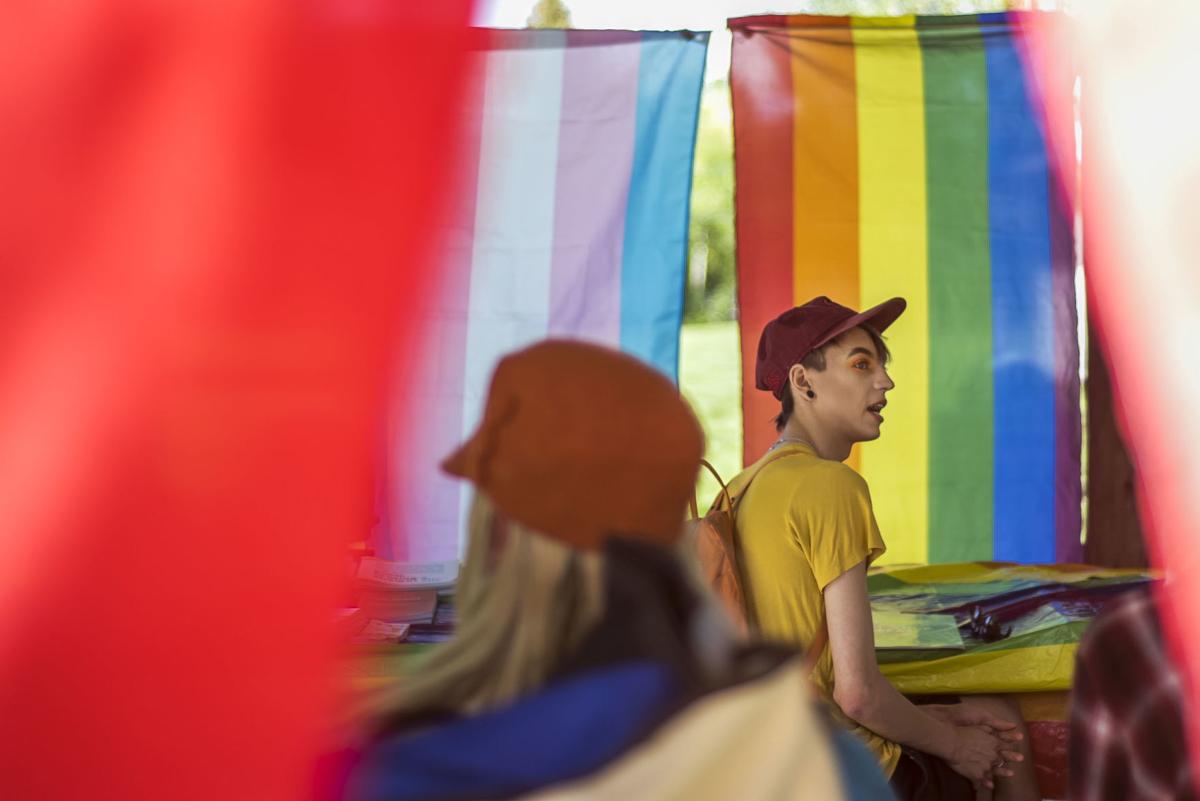 Cody Boyce socializes between pride flags during the 2019 Teton Pride Picnic at Mike Yokel Park. It was around this time that Aurora was born, Boyce said. 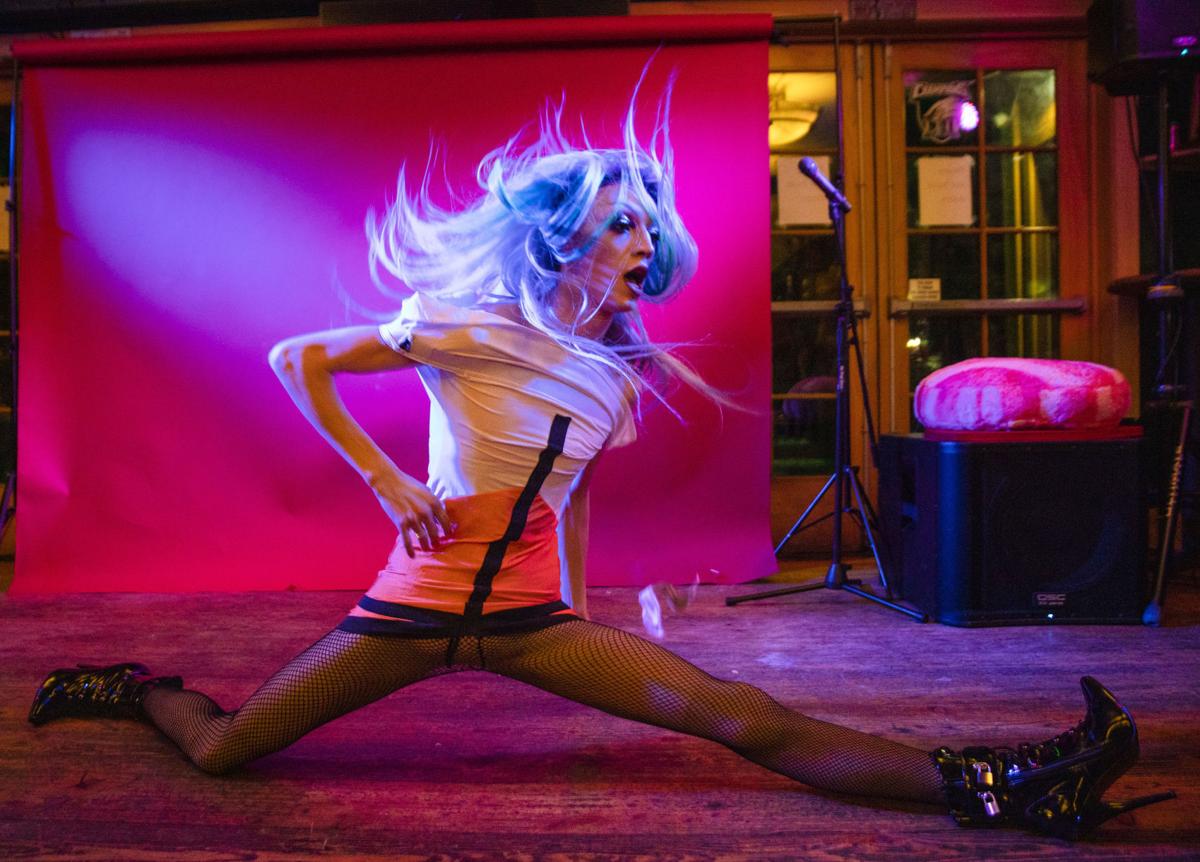 Boyce, aka Aurora, drops into a split while performing in a drag show last year at Cutty’s Bar and Grill. At the beginning of the pandemic, Boyce launched Aurora Queen of the Night, a local cosmetics business featuring products honoring the beauty of Jackson and Wyoming.

Cody Boyce socializes between pride flags during the 2019 Teton Pride Picnic at Mike Yokel Park. It was around this time that Aurora was born, Boyce said.

Boyce, aka Aurora, drops into a split while performing in a drag show last year at Cutty’s Bar and Grill. At the beginning of the pandemic, Boyce launched Aurora Queen of the Night, a local cosmetics business featuring products honoring the beauty of Jackson and Wyoming.

Jackson Hole’s first and only actual drag queen, Aurora, is showcasing her love for the Tetons through her new local cosmetics business, Aurora Queen of the Night.

Cody Parker Boyce, the Jackson resident who is also Aurora, had been mulling the idea of a brand inspired by his hometown for at least two years. When the pandemic hit and drag shows were no longer possible, Boyce leapt at the opportunity to begin Aurora’s eponymous beauty brand.

“I love Jackson and I love Wyoming,” Boyce said. “I love the wildlife, and I love the activities we get to have here, like hiking and skiing. It really helped me create a lot of the names for the shades in our new palette.”

The new palette, the Prismatic Collection, features eyeshadows named after Wyoming figures, like Buffalo Bill and the Moulton family, iconic Wyoming wildflowers, the Wyoming Cowboys, and places like Old Faithful, Snow King Mountain and the Grand Prismatic Springs in Yellowstone. Aurora Queen of the Night also sells a set of bold false eyelashes called “Tetons,” a playful homage to the staggering beauty of the mountain range.

After three or four years of doing his own makeup, Boyce said he is sometimes unable to find a product that suits his needs.

“Some products may not blend well on the skin, or crease with eyeshadows,” Boyce said. “We wanted to customize our own line to have quality control and make something that the drag queen, first of all, is happy about, but that other people would be happy about too.”

While the business aims to be a Jackson brand that highlights a style not well-represented in the town, the products are designed to be useful to any consumer, “from housewives to drag queens.”

“I want to inspire people to really try to step outside of their comfort zone, while still enjoying themselves,” Boyce said.

Aurora herself was born from Boyce’s ability to push beyond his comfort zone. Boyce admitted that he is an introvert, so he and Aurora are social opposites, as drag helps Boyce take away his shield to become more “authentic and fearless.” The heart of drag is the performance, he added, which provides Aurora a stage to exude her confident, lively and attention-loving personality.

But there are great challenges to the growth of a community that tends to fly under the radar in Wyoming. Joshua Roche, who is Aurora Queen of the Night’s publicist and Boyce’s partner, said there is still great fear stemming from scars in Wyoming’s past. Matthew Shepard is a name that comes to mind: Shepard was an openly gay student at the University of Wyoming who was attacked and killed in a field near Laramie.

“Even at this late date, 20 odd years later, we’re still struggling to build the community and gain acceptance,” Roche said. “It’s a lot easier in Jackson than anywhere else in the state.”

But the partners forge on in hope and gratitude. Locals are fully invested in Aurora and have shown excitement for her brand, Boyce said. Aurora even won an award for being the best dressed in Jackson Hole last year.

At drag shows in the past, people from “all walks of life” — including LGBTQ community members, ranch hands and construction workers — have lent their encouragement. The response has been overwhelmingly positive.

“I appreciate all the locals’ love and support, because without their help, I wouldn’t be able to grow as an individual or as a brand,” Boyce said. “They really helped me grow from a very shy individual to a very think-big kind of gal.”

Aurora Queen of the Night is now conducting business only online, but it is looking to sell its products at local stores. In the future Boyce and Roche dream of making Aurora an international brand that can compete with mainstream brands like Jeffree Star and his cosmetics line. As the brand becomes better known, Boyce hopes that the people who stumble upon Aurora’s products will be inspired to learn more about the Equality State and the stunning sights it has to offer.