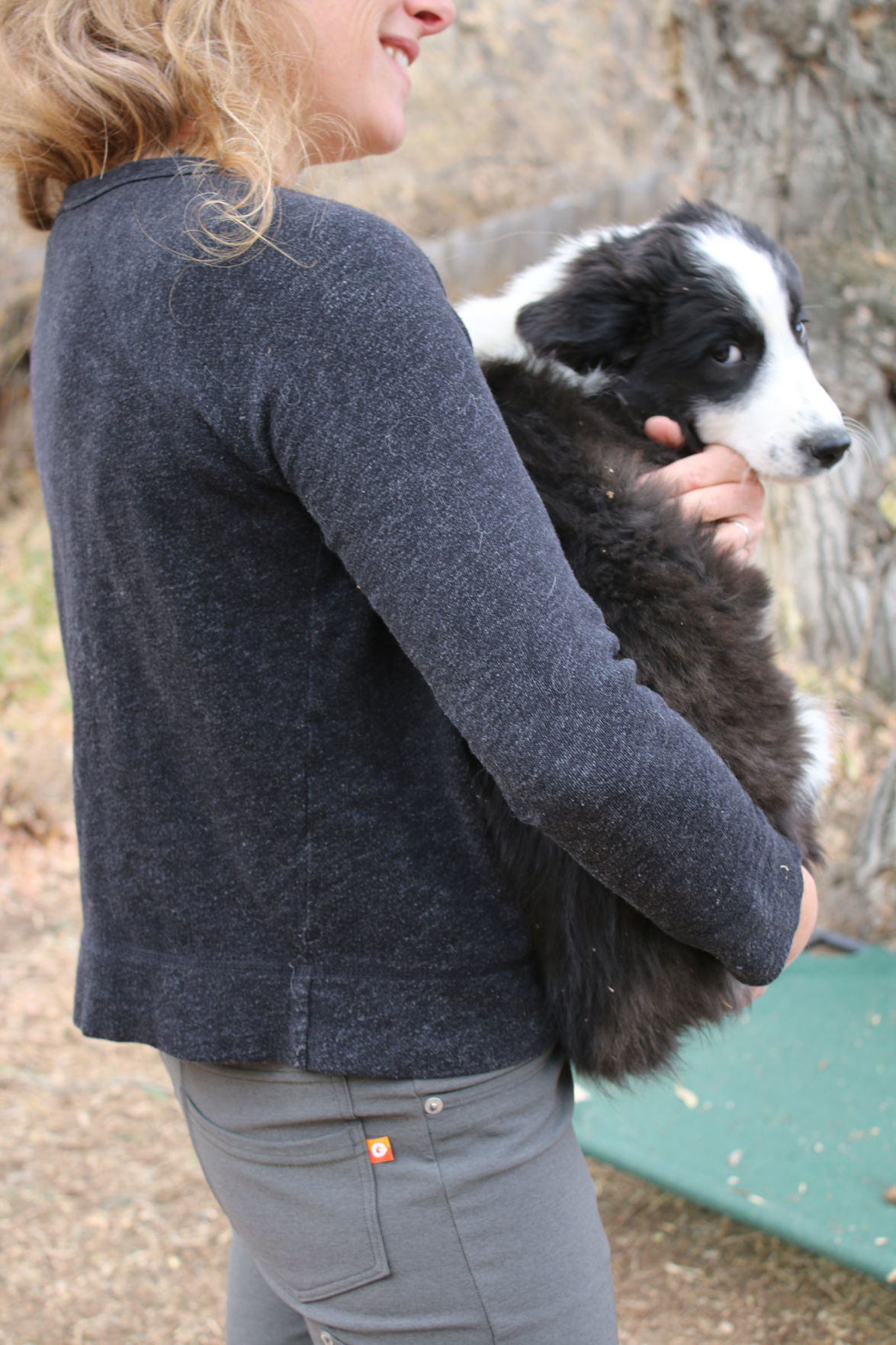 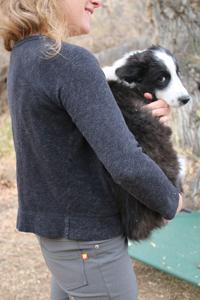 Glow Workwear’s Squeeze pant features nylon with a flat weave on the outside that won’t snag, while the inside has a softer, brushed texture. Here a pair is worn by Anna Dvorak, holding Moxie Mayhem, on a ranch in Sybille Canyon, halfway between Laramie and Wheatland. 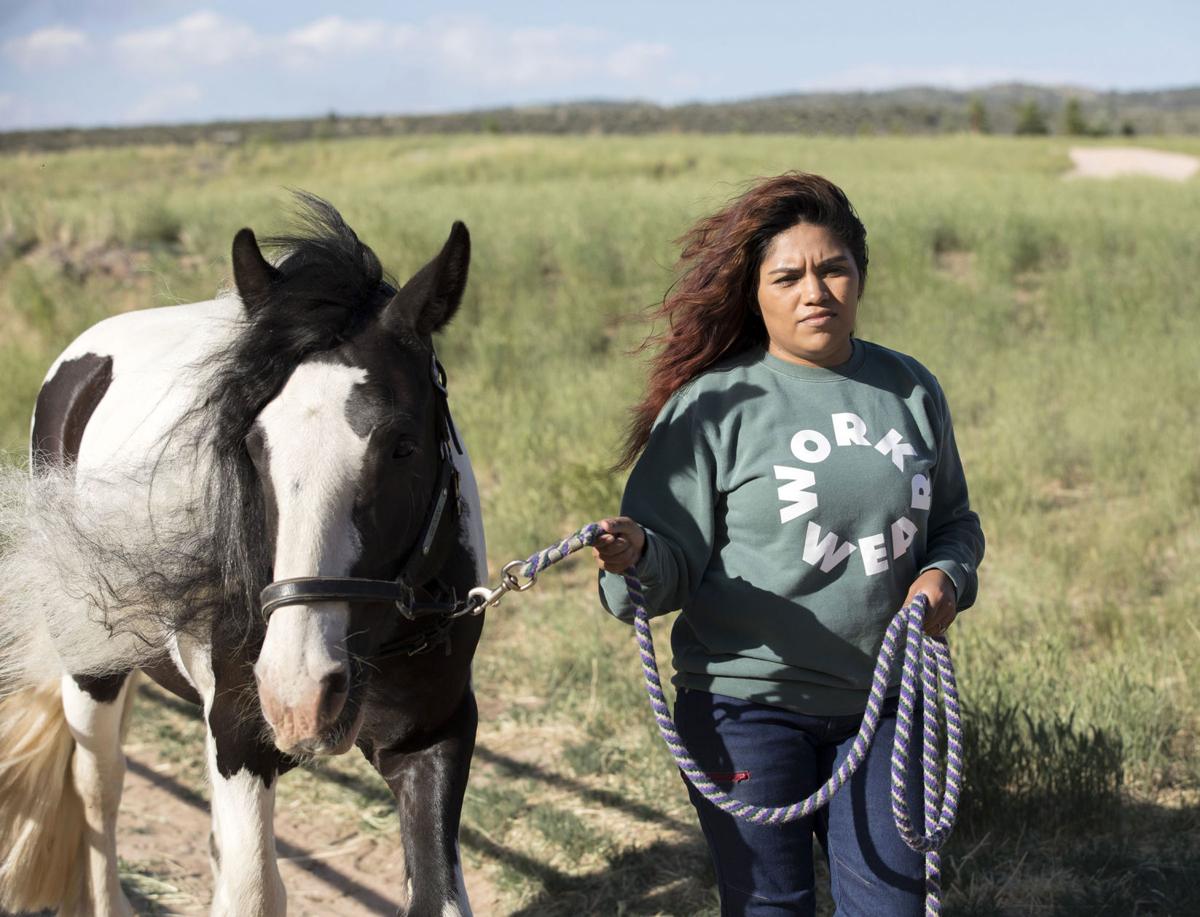 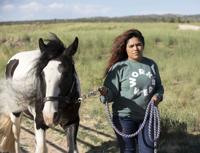 Glow Workwear’s Squeeze pant features nylon with a flat weave on the outside that won’t snag, while the inside has a softer, brushed texture. Here a pair is worn by Anna Dvorak, holding Moxie Mayhem, on a ranch in Sybille Canyon, halfway between Laramie and Wheatland.

LARAMIE — In 2005, back when she worked on a wildland fire crew on the Bridger-Teton National Forest, Emily Parsons remembers spending her downtime one day staring at the sky and pondering the unisex pants issued to crew members.

Pants purportedly made to fit everyone certainly didn’t fit her.

“The crotch was literally at mid-thigh,” she said. “They were not made for a person like me.”

In the years since then Parsons joined husband Jeff Smith in starting the tree care company TigerTree, where her day could include anything from loading branches to working in a bucket truck to meeting with clients.

“Your day does not consist of one thing only,” she said. “There’s this lovely mix to it.”

Over the years she looked for workwear that could hold up to heavy jobs, allow her to look professional when taking a meeting and fit without sagging or pinching. Suffice to say, the options were slim.

An entrepreneur at heart, Parsons then decided she’d start her own company and manufacture the clothing she’d been imagining. Her customers could be working in a variety of industries anywhere in the world, but evolving technology was making it easier to reach them with increasingly specialized products.

“Times are only getting better to have a shot at doing this,” she said.

The name, Glow Workwear, evokes a person who has reached a place of confidence and comfort in her identity and career.

“They’ve arrived at a place where they really like themselves and they like what they’re doing, and there’s this glow about them,” Parsons said. “That’s how I came up with it.”

Glow Workwear brought its first products to market this spring, a milestone in itself and the start of a new chapter in the life of the company.

“I feel like I have a Ph.D. now in the time and effort it has taken to make a product,” Parsons said. “That was a lot more learning that I ever intended to do.”

If you’re wondering how, exactly, one goes about starting a clothing company, Parsons started by finding a Jackson-based designer to take her ideas and put them to paper.

“Teri Davis, who is the owner of Confluence Designs in Jackson, is our designer,” she said. “She’s a treasure, and basically our design and outdoor industry fairy godmother.

Then Parsons looked for fabric.

“That was almost the funnest part,” she said. “People are making such interesting things.”

She looked to the world of outdoor gear for inspiration, where fabrics are being manufactured for all conditions and in all colors.

For example, the company’s Squeeze work pants feature nylon with a flat weave on the outside that won’t snag, while the inside has a softer, brushed texture. Glow’s work vest is made with fleece that has an exterior water-resistant coating.

“The fabric is so bombproof,” Parsons said.

A pattern-maker in Seattle took the designs and fabric and brought them to life, starting a process of testing, sizing and tweaking. Glow’s pants feature an extra-wide waistband that, when combined with fabric that stretches multiple directions, can accommodate a range of body types and stay in place all day.

When Parsons decided the first garments were ready for production, she did the initial manufacturing at a factory in New Jersey. The factory shifted its focus last fall, so Glow found a new factory in the Dominican Republic.

Parsons said she prioritizes ethical manufacturing and has been assured the factory has good standards. She plans to see for herself later this year.

“I do look forward to being able to go visit the factory,” she said.

Now Glow has reached the point where it is selling products through its website, GlowWorkWear.com, and networking through social media channels. Parsons has chosen to sell directly to consumers instead of through other retailers so she can keep the price lower while using fabrics that meet a third-party standard for sustainability and responsible manufacturing.

“We’ll be able to make a product that is reasonably priced by not wholesaling,” she said.

In the next few months the company is set to release a pair of denim work pants and a long-sleeved zip-up sweatshirt, among other products. Parsons said she’s looking forward to hearing feedback from customers and continuing to improve the designs.

“You can hit your stride making for different groups of people, and I think that’s great for everybody,” she said.

Customers are welcome to come to the Laramie office to try on products, and returns are free.