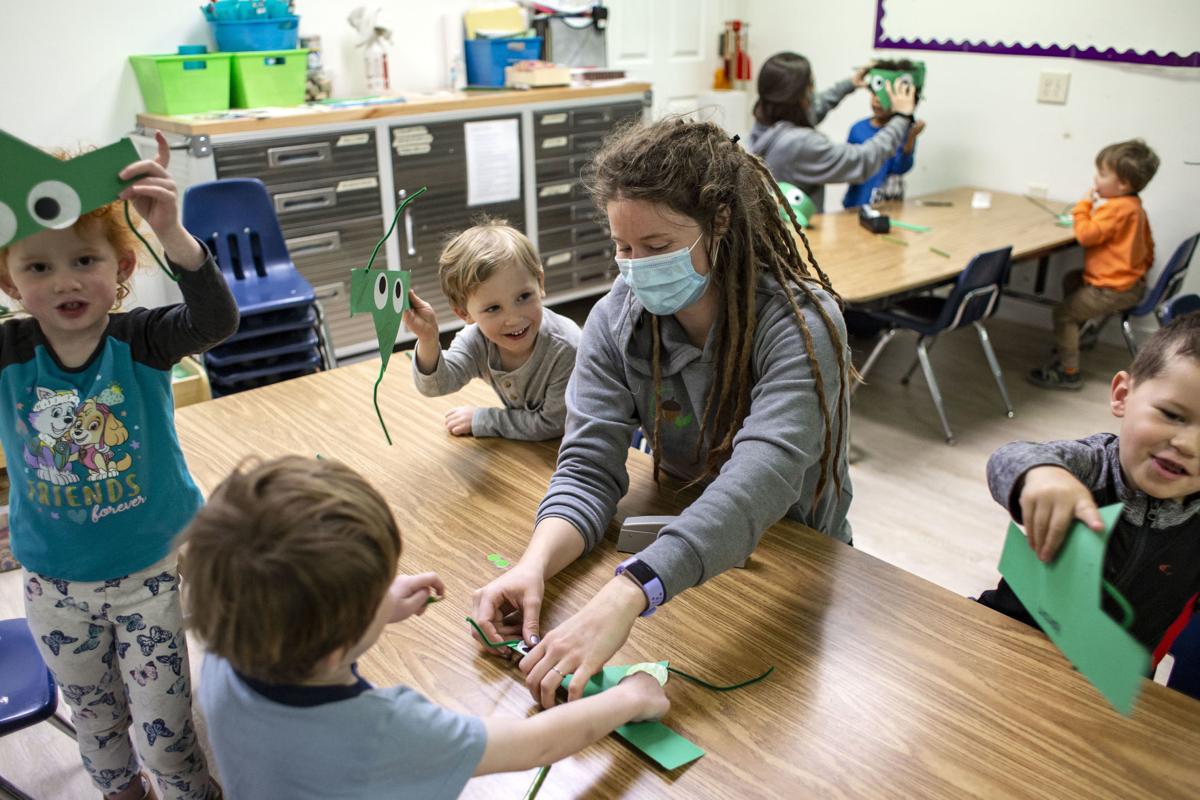 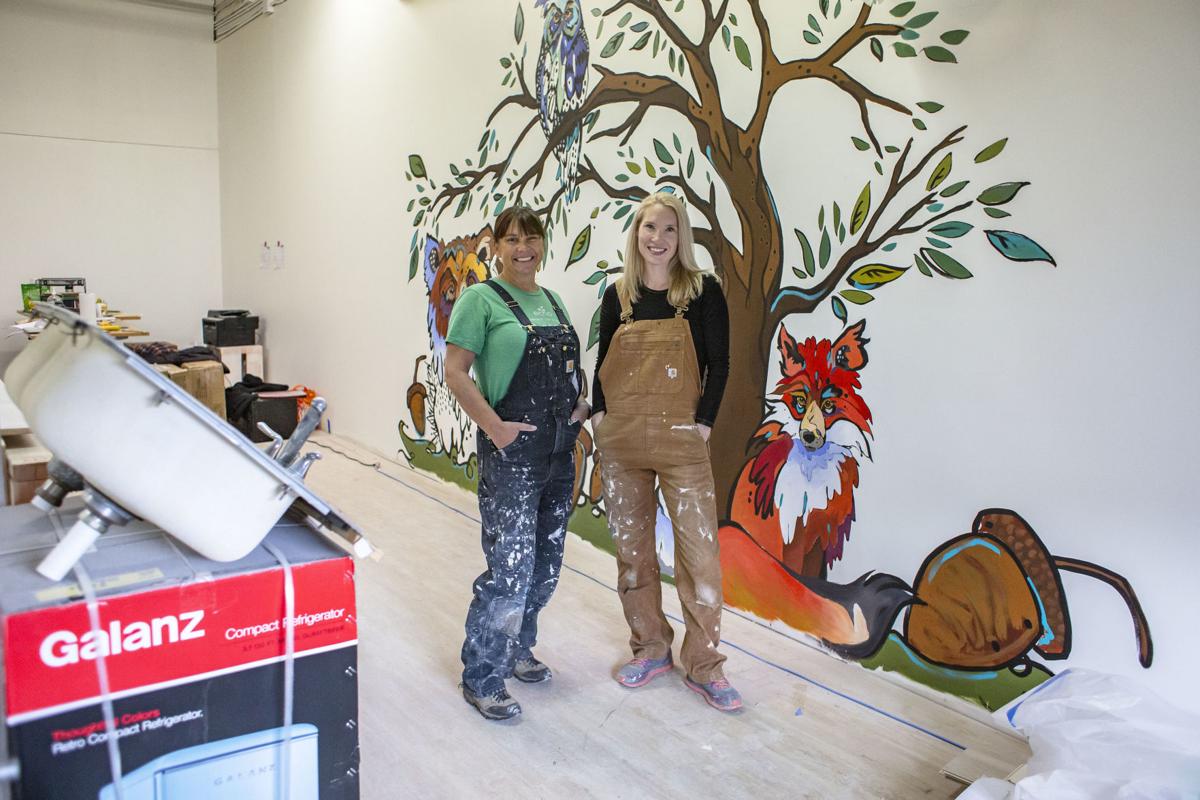 Co-owners Fiona Wilson, left, and Sara Dolentz continue to oversee the construction and expansion of their day care and preschool, Little Acorns Academy. The new facility is set to open Jan. 4. 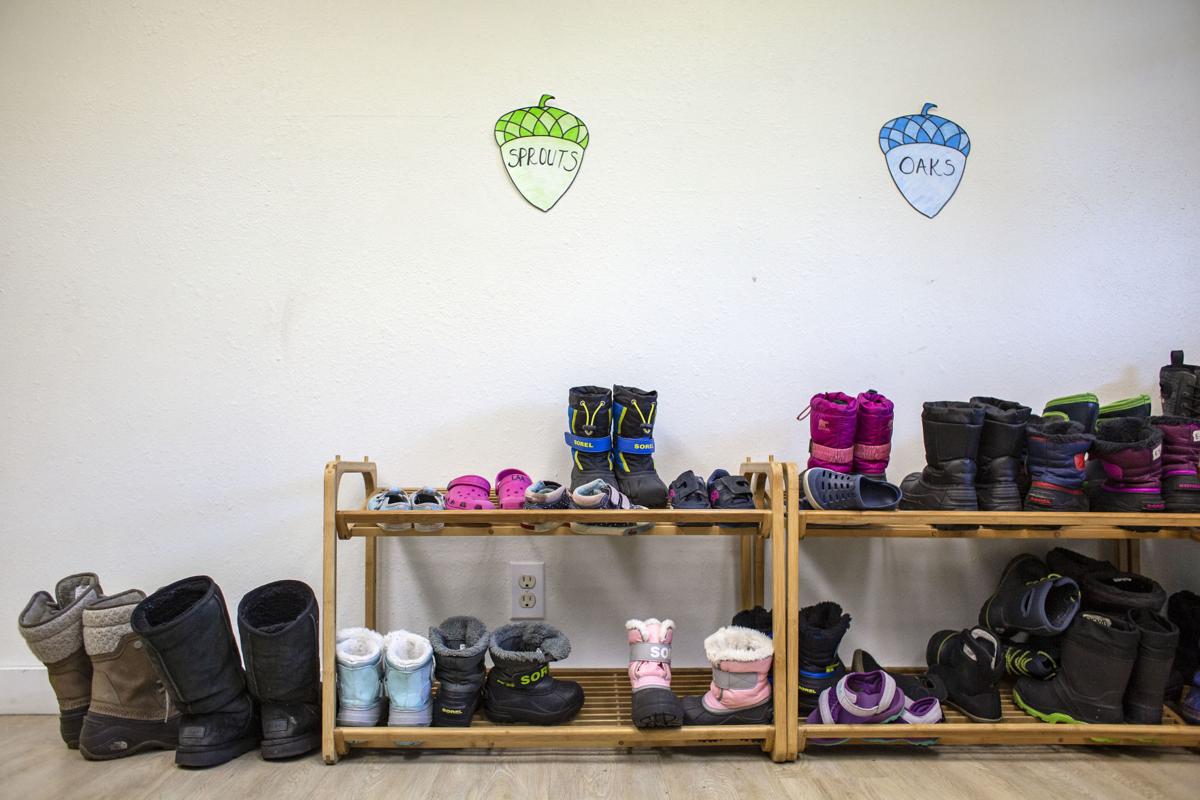 Students line up their snow boots at the front door of Little Acorns Academy. Little Acorns is remodeling and expanding in order to meet Jackson’s growing need for child care.

Co-owners Fiona Wilson, left, and Sara Dolentz continue to oversee the construction and expansion of their day care and preschool, Little Acorns Academy. The new facility is set to open Jan. 4.

Students line up their snow boots at the front door of Little Acorns Academy. Little Acorns is remodeling and expanding in order to meet Jackson’s growing need for child care.

Little snow boots of all colors line the entryway of Little Acorns Academy. A walk through the hallway reveals plant-themed names for each classroom: Acorns, Sprouts, Seedlings, Saplings, Oaks.

It’s lunchtime, but the smell of fresh paint — not food — wafts out of the empty kitchen. The children are eating in their classrooms due to COVID-19 precautions.

Director Fiona Wilson visits a classroom where the children show off the various meals their parents packed and sing her a new song to the tune of “If You’re Happy and You Know It.”

“When I’m eating at the table, I’m polite,” they sing in unison, followed by two claps.

This group of kids is part of Little Acorns’ preschool, which will be moving into the unit next door come Jan. 4. The child care center has both a preschool and a day care that are now housed together with a capacity of 35 children. That number will go up to 73 after the expansion, which will help with the continuing struggle parents in Teton County face when searching for child care.

Wilson and co-owner Sara Dolentz have done much of the renovation themselves, transforming the unit of eight or nine offices into three large preschool classrooms and an indoor play area.

“Fiona and I, we ripped out all the carpet ourselves. We demoed all the walls that we knew were going to come down,” Dolentz said. “It’s literally her and I taking axes to the walls, and so then we mudded and taped all of this and painted it.”

Dolentz has a background in business and handles Little Acorns’ administrative duties. She said they were already looking to expand six months after they opened in April 2019, so the decision was easy when a unit became available under the same roof.

Wilson had opened and operated a day care of the same name in Alpine over 15 years ago for her daughters, ages 2 and 3 at the time, to attend.

“I’ve always kind of been somebody that, I don’t know, just likes to keep myself busy,” she said. “I kind of wanted them to have that social aspect, and there was no day care down there, so I started up the original day care just because I felt there was a real need.”

She sold the business when she moved to Jackson but always had a passion to get back into it.

Wilson and Dolentz met about 10 years ago in hospitality. Wilson was inspired to open Little Acorns again in Jackson years later after seeing Dolentz struggle to find child care for her newborn son.

Dolentz now has another child attending Little Acorns, a baby who was born March 16, the day before the child care center closed for the pandemic.

All of the employees were able to continue working during the seven-week closure. While Dolentz was taking care of her new baby, some teachers were able to provide in-home care for the children while the parents worked. They also used the time to get ahead on their annual training requirements.

The day care received both a Payroll Protection Program loan, which it didn’t have to pay back because all the employees stayed on payroll, and a Wyoming Business Council grant that helped pay for another staff member completely dedicated to coronavirus sanitation. It reopened May 6.

“One thing that was huge for us was how early they opened,” said Diana Miller, who has a preschooler at Little Acorns. “Honestly it was a struggle for my husband and I trying to work and have a kid at home, and so having that facility open back up before a lot of the other facilities did, that was major.”

While the kids, who range from infants to just before kindergarten age, aren’t required to wear masks, the parents and children have taken the COVID precautions in stride.

“They’ve just been overly careful too, which is nice to know that everybody’s looking out for everybody,” Wilson said. “I think they want us to stay open. So they’re being very, very kind of forward thinking about it as well.”

“They seem to be doing a great job with it,” said John Long, father to a 2- and 4-year-old at Little Acorns. “I can tell how careful they’re being. I’ve seen some places that say they’re being careful, but you observe them not being careful.”

Long said his children even wear a mask a fair amount of the time, and Miller noted that the parents haven’t even seen the new space because of the precautions in place.

Little Acorns does use an app to send pictures and updates to parents to let them know the kids are in good hands even though they can no longer go inside for drop-off and pickup.

“It was almost harder for the parents to adapt than it was for the children. It’s amazing how adaptable these little kids are,” Wilson said. “You don’t even have to tell them anymore, they walk in the door … and they stand there and they stick their little heads forward and they just wait for you to take their temperature.”

Wilson and Dolentz do have a plan in place should they have to close again. Their philosophy of day care as a whole is “family first,” so their COVID-19 approach involves asking how each decision they make will impact the parents.

“It’s about not only caring for the child — obviously, that’s the first priority,” Dolentz said. “But it’s about caring for the entire family through the experience because moms that have had their kids enter day care, it’s tough on the heartstrings to drop your child off and spend the day somewhere else.”

Though the new unit for the preschool had the square footage to make a fourth classroom for even more kids, they decided against it.

“We didn’t want to just cram children in, so to speak,” Wilson said. “We wanted to make it a really good experience.”

And from what parents had to say about their experience with the current preschool, it will be.

“We’re having another baby this spring,” she said, “and no hesitation she’s going there.”