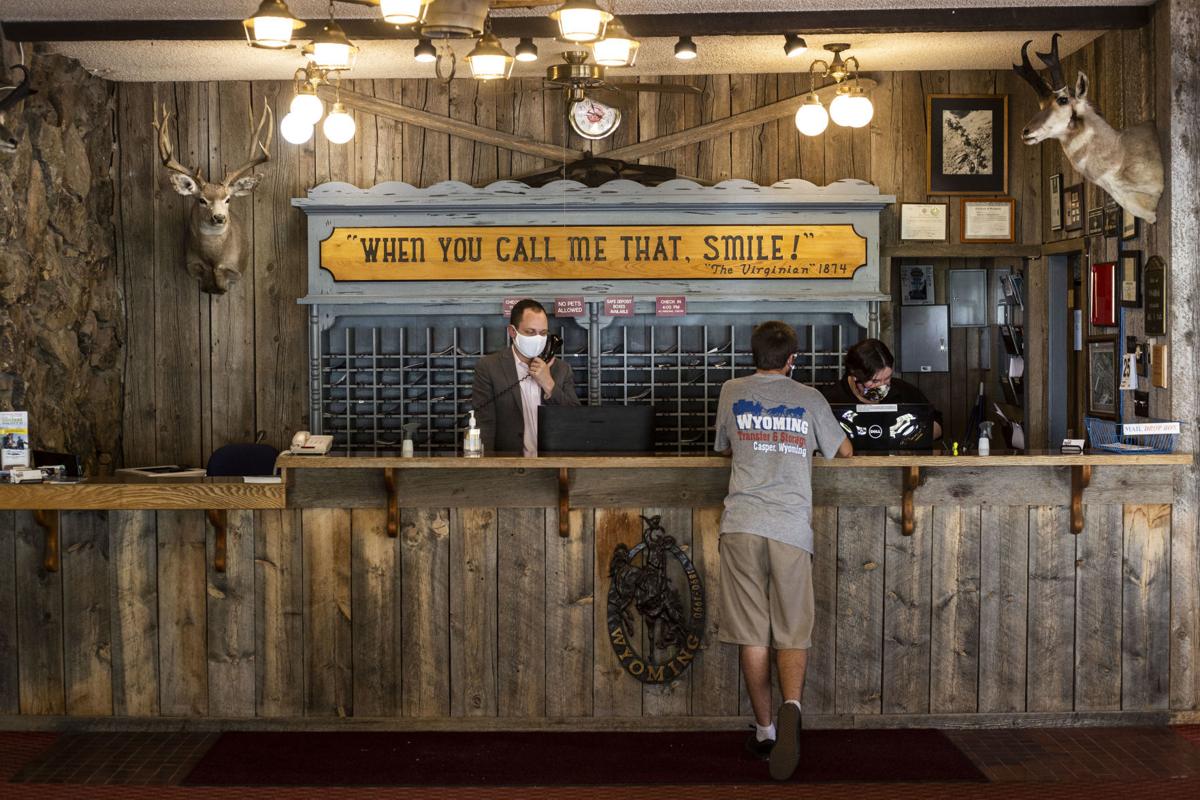 Tim Erkelens-Probst, a member of the transition team, and Alyssa Rush help a guest check in Tuesday at The Virginian Lodge. The lodge and saloon, owned by the Napierskie family since 1965, recently sold to Orion Companies, a local building and development group, and Waterton, a Chicago real estate company. 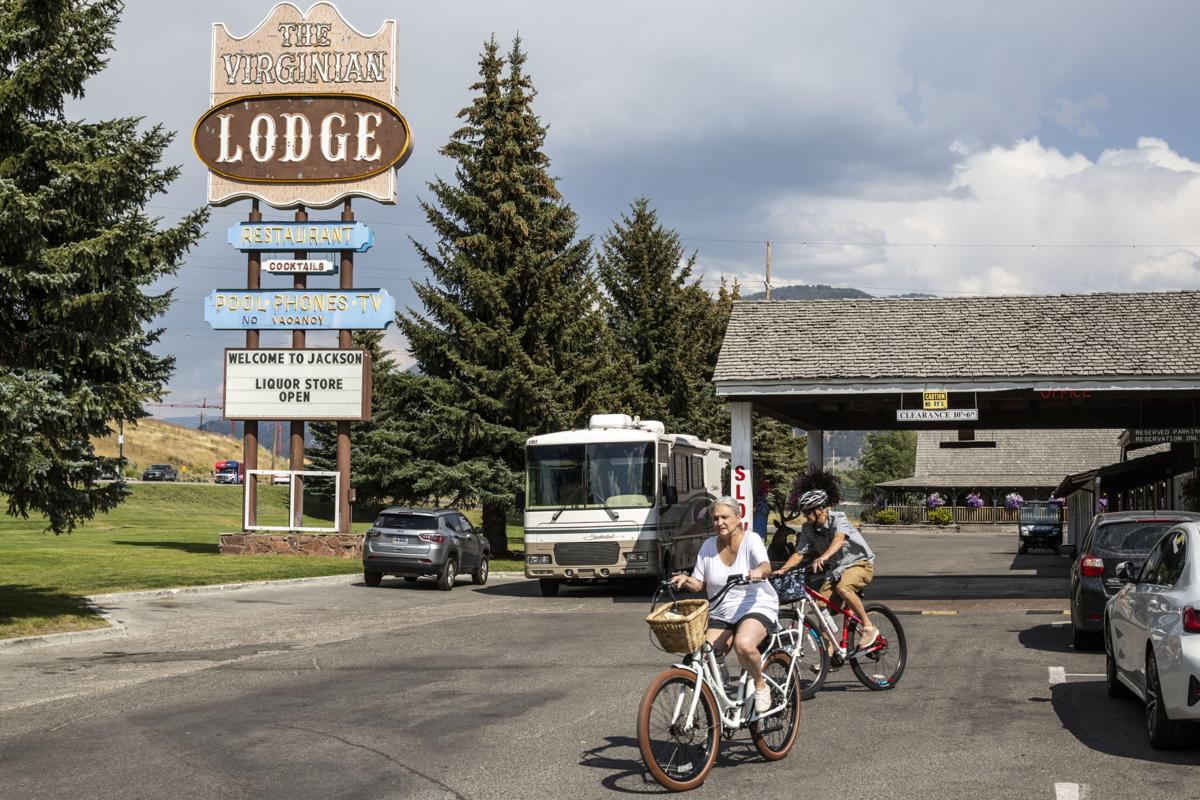 The Virginian Lodge, RV Park and saloon, owned and managed by the Napierskie family since 1965, recently sold to Orion Companies, a local building and development group, and Waterton, a Chicago real estate company. 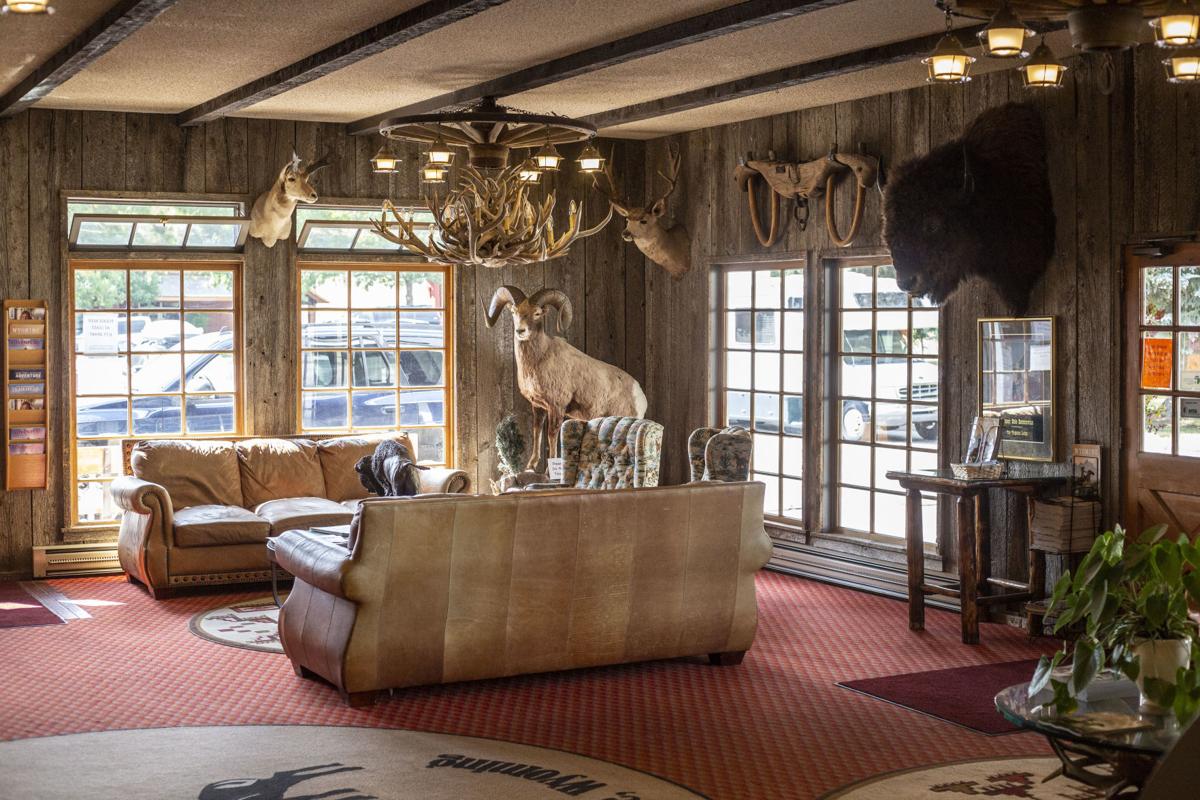 The Virginian’s new owners plan to update the lodge, but promise no jarring changes to the 1965 hotel. 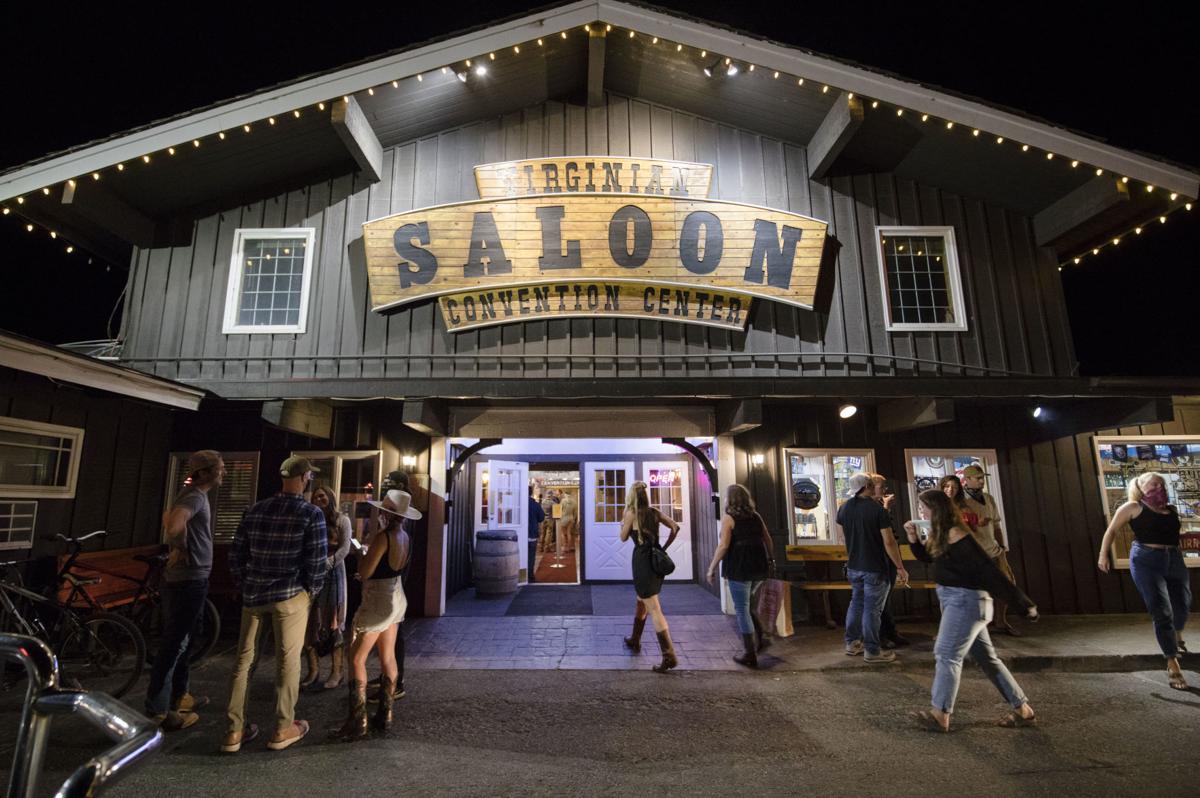 The Virginian has been sold. 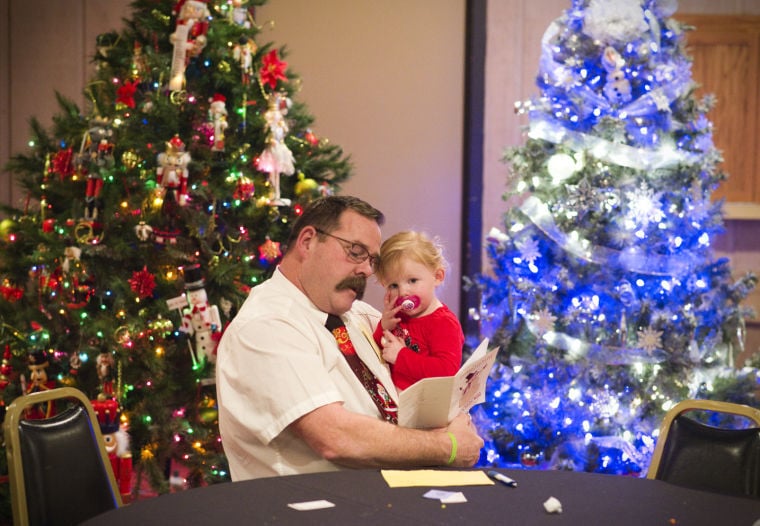 Michael Mahoney shares a moment with his granddaughter, Hattie Allen, 2, after the 2014 Soroptimist Tree Festival at the Virginian. 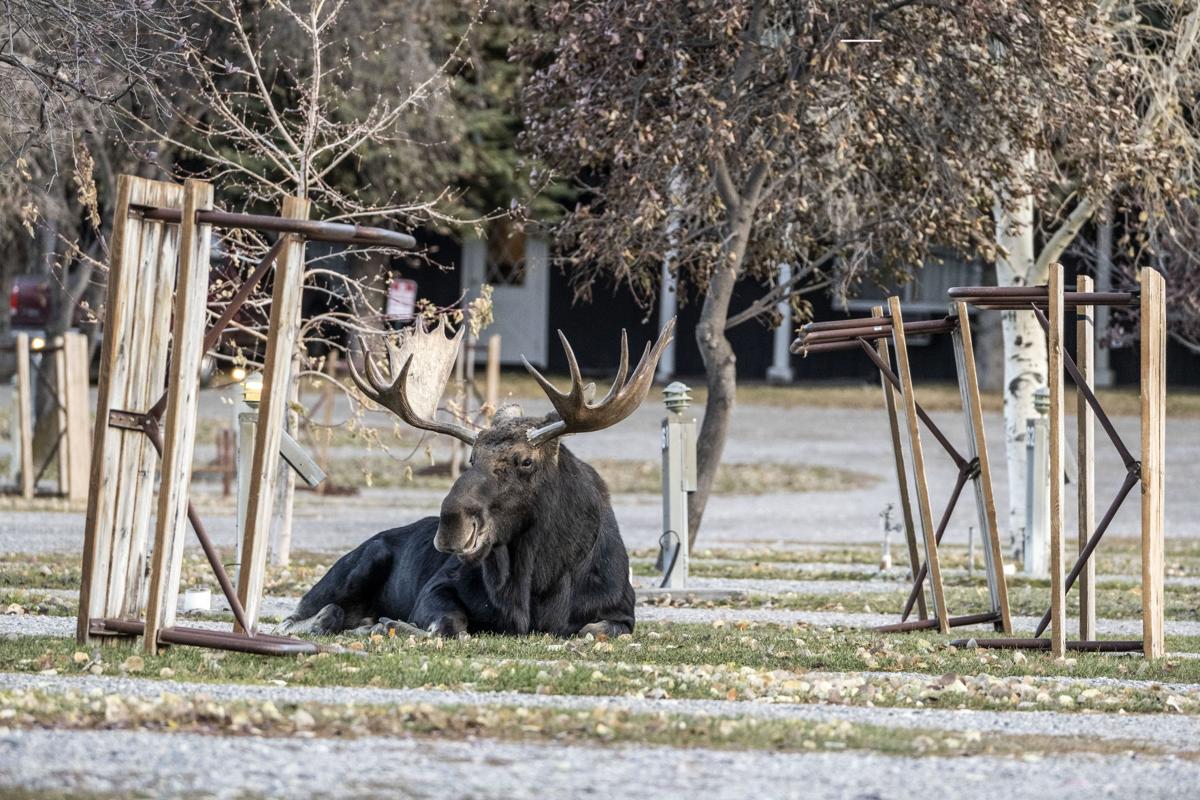 A large bull moose enjoys the calm of the off-season last October at the Virginian RV Park along Snow King Avenue. Chris Lasley, of Flagstaff, Arizona, makes a call under the watch of his dog Jazz before checking into the Virginian RV Park on Tuesday. The property’s buyers plan to run the park as-is next year with five spots filled by stand-alone “glamping” units.

The Virginian is headed to a future that does not include one of Jackson’s most colorful and sometimes scruffier bits of history.

The Virginian Saloon is no more, the space shut and the windows papered over as the Virg’s new owners prepare to turn it into what they call “a family-style bar and restaurant.”

Sale of the Virginian — the saloon, the lodge and liquor store, the RV park, everything on the 13 acres — was signed Friday. Descendants of founders Glenn and Virginia Napierskie did the selling.

No Virginian Saloon will be a big change. The place has been a mainstay in Jackson since the 1960s, and was the sort of place with an afternoon clientele and where the last loyal drinkers had to be herded out at closing time.

The saloon was also the last food and drink joint in Jackson where you could smoke a cigarette. That cough-inducing tradition didn’t end until 2012, three years after any other place in town allowed the customers to smoke ’em if they had ’em, and five years after county health officials began fighting for a smoking ban. Most bars and restaurants just gathered up the ashtrays when the ban became a public debate, not waiting for a law; the Virg actually led the fight against the ban, arguing that no one was being forced to come in and breathe the gritty air.

The new owners have promised no jarring changes but are set on a major overhaul of the place.

On top of already shutting the saloon, they say they’ll close the 170-room lodge late this year and remodel the rooms. They plan to reopen in summer 2021.

Robert Huggins, one of the principals in the new ownership, said in a statement that he and his partners “are excited and honored by the opportunity to renovate and refresh the iconic Virginian Lodge while respecting the heritage of the property and the Napierskie family’s legacy.”

Huggins is the only name among the new owners publicly revealed. He is a builder who does business in Jackson as New West Building Company and a principal in Orion, a group of building contractors billed as “100% locally owned.” In partnership with Orion is Waterton, a Chicago firm that owns and runs hotels and apartments around the country. Waterton has assets of about $5.3 billion.

Waterton was founded in 1995 by David Schwartz and Peter Vilim, who remain at the top. Neither owns property in Jackson under his own name. Schwartz, a member of the Chicago Real Estate Hall of Fame, told Crain’s Chicago Business in 2010 that he’s a climber and that his favorite place is Jackson Hole.

None of the new owners consented to an interview. All the information in this story about their plans is from a release prepared by a public relations firm.

The lodge and adjacent 103-space RV park were advertised at $60 million. Local real estate people say they doubt the deal was for the full asking price.

Realtor Greg Prugh, who handled the sale for the Napierskie family, said the family was pleased with the deal. Working with Prugh for the Napierskies was Breezy Mulligan. Two other Prugh Real Estate agents, Brooks Woodfin and Jill Learned, advised Orion in the purchase.

The RV park has been seen as a likely redevelopment opportunity, with much talk, not from the buyers, about how it would a good site for a dense concentration of worker housing. The owners’ release said plans are to run it next year with five of the sites “transformed into stand-alone units with a ‘glamping’ vibe.”

Other plans announced by Orion and Waterton are:

• The “family-style bar and restaurant” that the Virginian Saloon will become will have access to the lodge’s interior courtyard and pool area.

• A fix-up of the Virginian’s 4,900-square-foot conference area is in the works, also with new access to the courtyard.

• The guest room remodeling will include “modern touches that meet the needs of today’s traveler” and add a “more upscale sensibility,” but the redesign will be done “with a nod to the original roots of The Virginian.”

• The three-quarter-acre courtyard will see “the addition of lush landscaping and several seating areas where guests can gather and unwind.” Courtyard plans also include setting it up for musical performances.

Glenn and Virginia Napierskie opened the lodge in 1965. Glenn Napierskie II wrote in a letter to Jackson Town Council members that he believed the buyers intended “to conserve our family’s legacy by maintaining the property much as it’s always been.”

During its time The Virginian has often hosted community events such at the ’49er Ball and the Soroptimists’ annual Christmas Tree Sale, along with chamber of commerce and Cow-Belles meetings and crafts, car and home shows. It has been a sort of unofficial headquarters for the annual World Championship Snowmobile Hill Climb. More information about its history can be gleaned from News&Guide archives, available to the public via Newspapers.com:

Work on the site began in April 1965, when contractors began preparing the ground. The Napierskies were longtime summer visitors from San Diego; he owned a plumbing business there.

The initial motel plan had 101 units, and the first 20 opened in August 1965; the rest opened weeks later with a ceremony including Wyoming Gov. Cliff Hansen, a Jackson Hole rancher. The Jackson Hole Guide described the location as “west of town.”

The Guide noted that the new units would be “welcomed by the traveling public, many of whom have been unable to find any type of accommodations in Jackson on busy weekends.”

The next-door restaurant opened in May 1966. The steakhouse-style restaurant was in the town’s first Catholic church, built on King Street in 1936 and hauled to the Virginian site and remodeled.

During an October 1985 arson spree that burned several Town Square businesses, The Virginian was also targeted. About 70 of its rooms were destroyed.

The restaurant, doing business as the Howling Coyote Grill, was the victim of another suspicious fire in August 2001. A new building was built on the same site.

Glenn Napierskie died in a car crash in September 2006 near the National Fish Hatchery, just north of Jackson. He was 81. Virginia died at age 94 in May 2019.

The Napierskies donated some of the land needed in 1984 to complete Snow King Avenue, the only cross-town road other than Broadway. They also developed the Virginian Apartments and Creekside Village, and for some years owned Flat Creek Ranch.

“A family style bar and restaurant” kills me when I hear it. I don’t mean to be critical, but to me, anyway, it’s kind of like saying “Grade school cafeteria and crack lab.” I owned a restaurant with a bar. I haven't had a drink in going On 40 years. Putting those two things together in one sentence just seems oxymoronic.