Ranch salesman Bernie Uechtritz is promising a sale of 580 acres of land owned by John Tozzi in Spring Gulch. The flat land in the foreground is Tozzi’s agriculturally zoned property. Two residential lots sit on the north end of West Gros Ventre Butte, left. Spring Gulch Road is visible on the right. 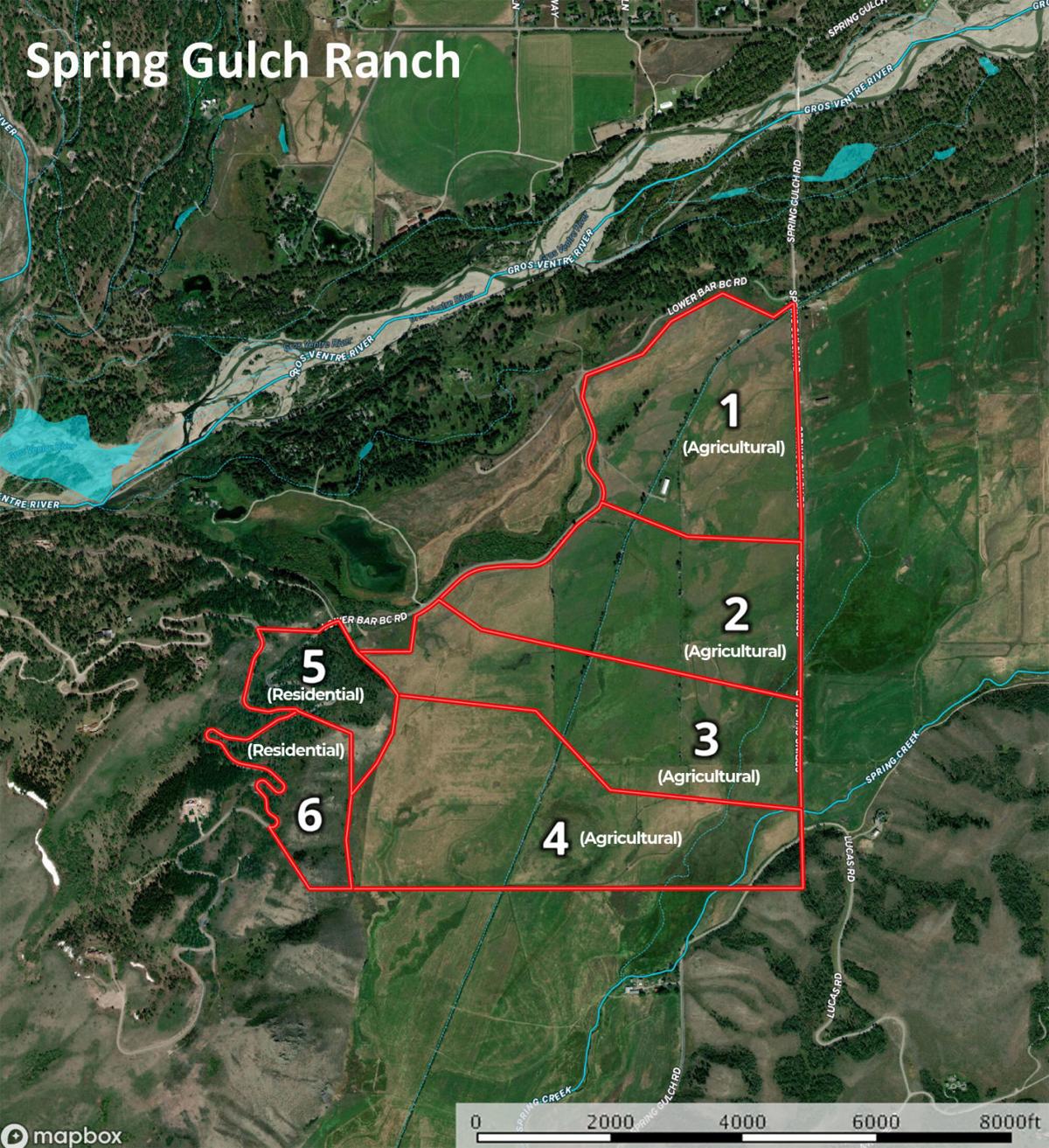 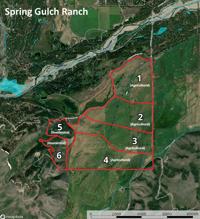 The 580 acres is zoned for six houses and agricultural use. It’s some of the last private land in the county that’s never been developed.

Ranch salesman Bernie Uechtritz is promising a sale of 580 acres of land owned by John Tozzi in Spring Gulch. The flat land in the foreground is Tozzi’s agriculturally zoned property. Two residential lots sit on the north end of West Gros Ventre Butte, left. Spring Gulch Road is visible on the right.

The 580 acres is zoned for six houses and agricultural use. It’s some of the last private land in the county that’s never been developed.

Less and less of the floor of the valley called Jackson Hole looks the way it used to, but a stretch of acreage that has mostly resisted obvious human improvement seems headed to new ownership.

The 580 acres at the north end of Spring Gulch were part of the old Hansen family ranch until the early 2000s, and from most parts of it there is a clear view of a mileslong stretch of the Teton Range. The land has been periodically and unsuccessfully marketed for 10 years. But a new effort by a high-powered ranch Realtor is about to begin.

Bernie Uechtritz has a legendary record among his peers for moving big chunks of the American West into new hands. Uechtritz said last week that he’ll devote his Icon Global Group, based in Dallas, to selling the property. By October. That’s when a 60-day sales campaign will end and the land will have a new owner. Guaranteed.

That kind of unequivocal confidence is unusual in the realty business. But Uechtritz gets away with it, said Matt Faupel, an owner of Jackson Hole Real Estate Associates, the local Christie’s affiliate, which formerly held the listing for the land.

“Bernie has a history,” Faupel said. “He’s got a great track record.”

Uechtritz is acting for John Tozzi, a longtime Jackson resident noted for his success as an investor in energy businesses and later in Jackson property. Tozzi bought the land in stages starting in 2004, completing his acquisition about 10 years ago. The bulk is divided in four pieces, three of 115 acres each and one of 162. The land is under a Jackson Hole Land Trust easement that limits each of the four parcels to one house and a guesthouse in a 10-acre envelope.

The Tozzi land also includes two neighboring parcels, one 35 acres and one 37. Sitting near the base of the butte that overlooks the flat ag land, they are zoned residential, part of the luxury home development Bar BC Meadows done by Ross Perot Jr. The son of the 1992 and 1996 presidential challenger, he is a Texas land developer and former owner of the Dallas Mavericks.

In response to a request for comment, Tozzi emailed the News&Guide to say that he met Uechtritz earlier this year and noted that he “has a global reach and the ability to market and sell distinctive, one-of-a-kind assets quickly.”

Tozzi intended the land to be a home for his family, but events — including a divorce — ended that plan.

“I originally purchased and developed the six ranches ... the Spring Gulch Ranch, with the idea that family members would eventually build out the parcels,” Tozzi said. “However, over time plans change and life changes as children work and live in other locations and as a family we’ve become somewhat scattered.

“So we have decided to dissolve and sell this one-of-a-kind collection of some 600 acres ... thus enabling each family member to decide for themselves what and where they would like to reinvest individually.”

Tozzi said the land has “been on and off the market softly for some time,” but he and his family “are now very serious about selling.”

Uechtritz, as part of his marketing strategy, isn’t putting a price on the land, insisting that “I’m going to market with no price. ... this is an open international call for offers.”

The pieces of land will sell “as a package or individually,” Uechtritz said, and “the market is going to tell us what this property is worth.”

He said the purchaser might be “a wealthy rancher who would use it for cows.” In recent years the land has been leased to the nearby Walton Ranch to graze 200 to 300 cattle.

Or the land might be sold in six pieces and used as intended when it was subdivided: as six houses sitting in the middle of protected land that can be used for almost nothing but agriculture.

The third possibility, Uechtritz said, is an angel buyer with an appreciation for the history and beauty of the gulch, a person whose idea of the best use would be the least use.

“Maybe someone will buy the whole thing and put one house on the hill,” he said. “Or maybe that end of Spring Gulch will never have another building on it.”

Uechtritz said he can’t control and won’t judge what the eventual buyers do, but he acknowledged a liking for that final possibility, and even some hope. He said it’s made more likely by the fact that Jackson Hole attracts “conservation-minded billionaires.”

Uechtritz said the limits placed on the land by the Land Trust discourage some people, but there will still be plenty of interest from his usual client base, people he called “high-net-worth squillionaires.”

“My instinct tells me this will go to somebody who has a philanthropic philosophy. ... a big-picture vision of leaving it the way it is.”

Worry about what could happen on the property began as soon as it was sold by the Hansen family in 2004. That came in the aftermath of the death of Mary Mead, daughter of ranch patriarch Cliff Hansen, whose father first homesteaded in the gulch in 1897. Hansen was Wyoming governor and Wyoming U.S. senator; he died in 2009.

Though Jackson Hole has evolved from wilderness to ranch to subdivision since the 1970s, cattle still roam the flats in Spring Gulch, and the only notable human presence are the big homes that dot East Gros Ventre Butte and West Gros Ventre Butte, the north-south mountains that hem the ranch land.

Under state law the acreage that Perot sold to Tozzi could have been divided without local review into 14 35-acre parcels. Teton County rules at the time also allowed a clustered residential development of more than 100 units. Less than a mile to the north, on the other side of the Gros Ventre River, is the old Karns Ranch, which in 1965 became the Jackson Hole Golf and Tennis Club, the valley’s first golf course, and its surrounding residential neighborhood.

Keeping northern Spring Gulch as close to the undeveloped ranch land as it has always been is a worthy goal, said Brad Mead, the grandson of Cliff Hansen who still raises cattle on much of the floor of Spring Gulch under the name Mead Ranch Natural Beef. He and his brother, former Wyoming Gov. Matt Mead, and sister, ad exec and writer Muffy Mead-Ferro, “had some say in the easements” that now protect the property.

“As a matter of philosophy I hesitate to tell somebody how to use their property,” Mead said last week. “But if somebody has a similar approach to protecting the property, that would be great.

“It’s a big asset, it’s a lot of money” to invest millions in conservation, he said, “but people do it here.”

Though Uechtritz’s promise to sell the property sounds like braggadocio, in the past he has talked big and come through. An Australian raised in New Guinea who dropped out of school after 10th grade, he became a Realtor in Los Angeles and later found ranch property to his liking. He’s 54 and lives in Texas.

In Wyoming Uechtritz’s firm led in the marketing of the 20,500-acre Dodge Ranch, near Wheatland, for $21.5 million. The buyer in that deal was brought to the table by Steve Duerr, a longtime Jackson Hole agent associated with Jackson Hole Real Estate Associates.

Duerr said that if anyone can find a quick buyer for the Tozzi land, Uechtritz is the man.

“Bernie is one of the most successful brokers in the United States, partly because of aggressive and innovative marketing,” Duerr said. “He’s a proven closer.”

Though the Dodge Ranch sale is Uechtritz’s only sale in Wyoming, marketing of the Tozzi land is happening at the same time that Icon Global tries to sell the Black Hills Mesa Ranch, a major ranch-turned-residential development near Newcastle in eastern Wyoming.

In the case of the Spring Gulch property, Uechtritz is launching a multimedia ad campaign that includes work done by Orijin Media, an independent subsidiary of Teton Media Works, the family company that owns the Jackson Hole News&Guide and the Jackson Hole Daily.

Uechtritz said that his big marketing effort is designed to push a sale, that the deal won’t be made in the traditional manner, with the seller’s representative buying some ads and then waiting for responses: “That is what I don’t do,” he said.

He said that even before his campaign begins this week “there are people I know who are ready to buy the Tozzi property.”

Any interested people who qualify financially can pursue their interest through an open offer, through the confidential tender format or through a "stalking horse" bid option. In that system people will gather in some office or hotel meeting space in October to make their offers. Not a traditional auction, it’s a system in which a “stalking horse” bidder will set a low price and other parties will have a chance to make counteroffers.

“He’s found a niche, a way of hybridizing things,” Faupel said. “A way to create that sense of urgency but not have it feel like it’s a stressed sale.”

Uechtritz, though he runs his own firm, is an associate broker at Sotheby's. His Icon Global Group team includes Jackson-based ranch expert Deidre Griffith, licensed with Jackson Hole Real Estate Associates, to handle questions and show the property.

Uechtritz, in spite of trying to make a sale that’s resisted happening for a long time, exudes confidence.

“I take on things that are impossible and make them work,” he said.

This version of the article has been edited to clarify that Uechtritz is an associate broker with Sotheby's and that Faupel's Jackson Hole Real Estate Associates formerly held the listing for the land. Information about the process of making offers for the ranch was also added. — Ed.

Dirt merchants, on commission, have no choice but to develop and fill the valley, any valley, with homes and ranchettes... they cannot be stopped.