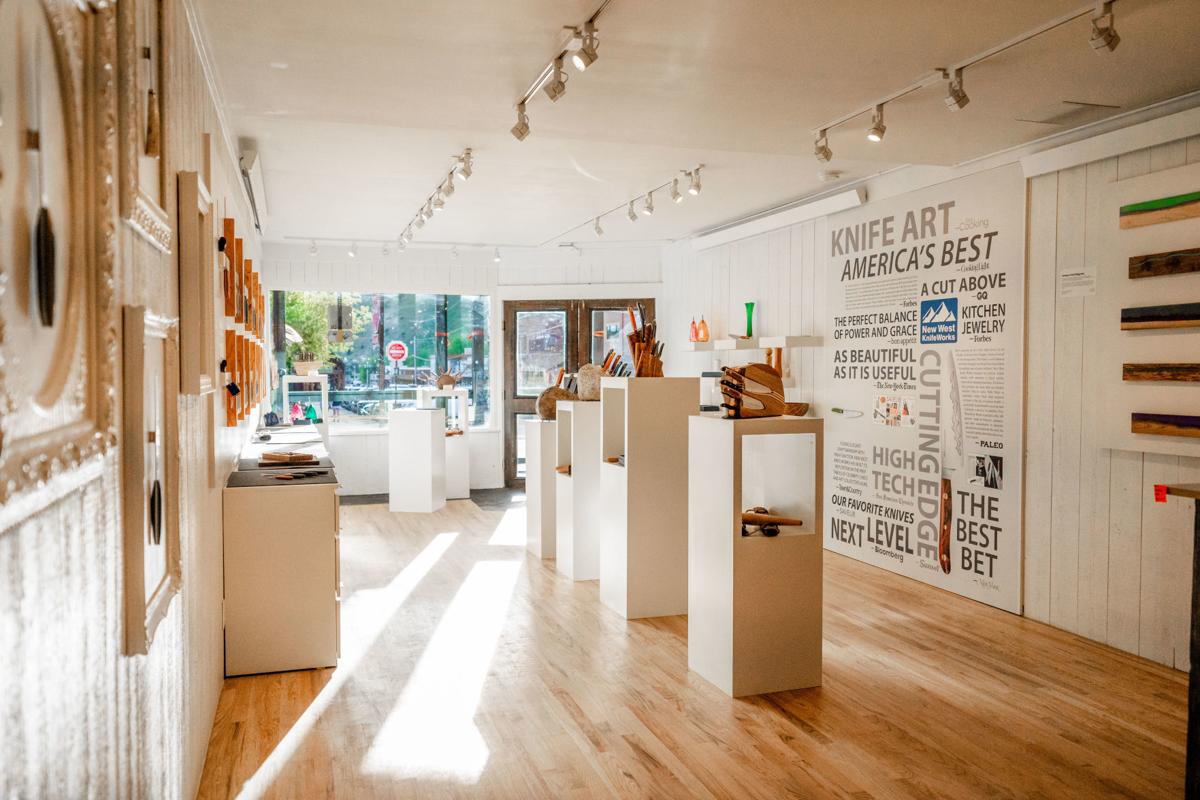 After expanding into and remodeling a shop formerly occupied by Dali’s, the New West Knifeworks flagship store has a Town Square-facing entrance and a light-filled gallery to display its knife art. 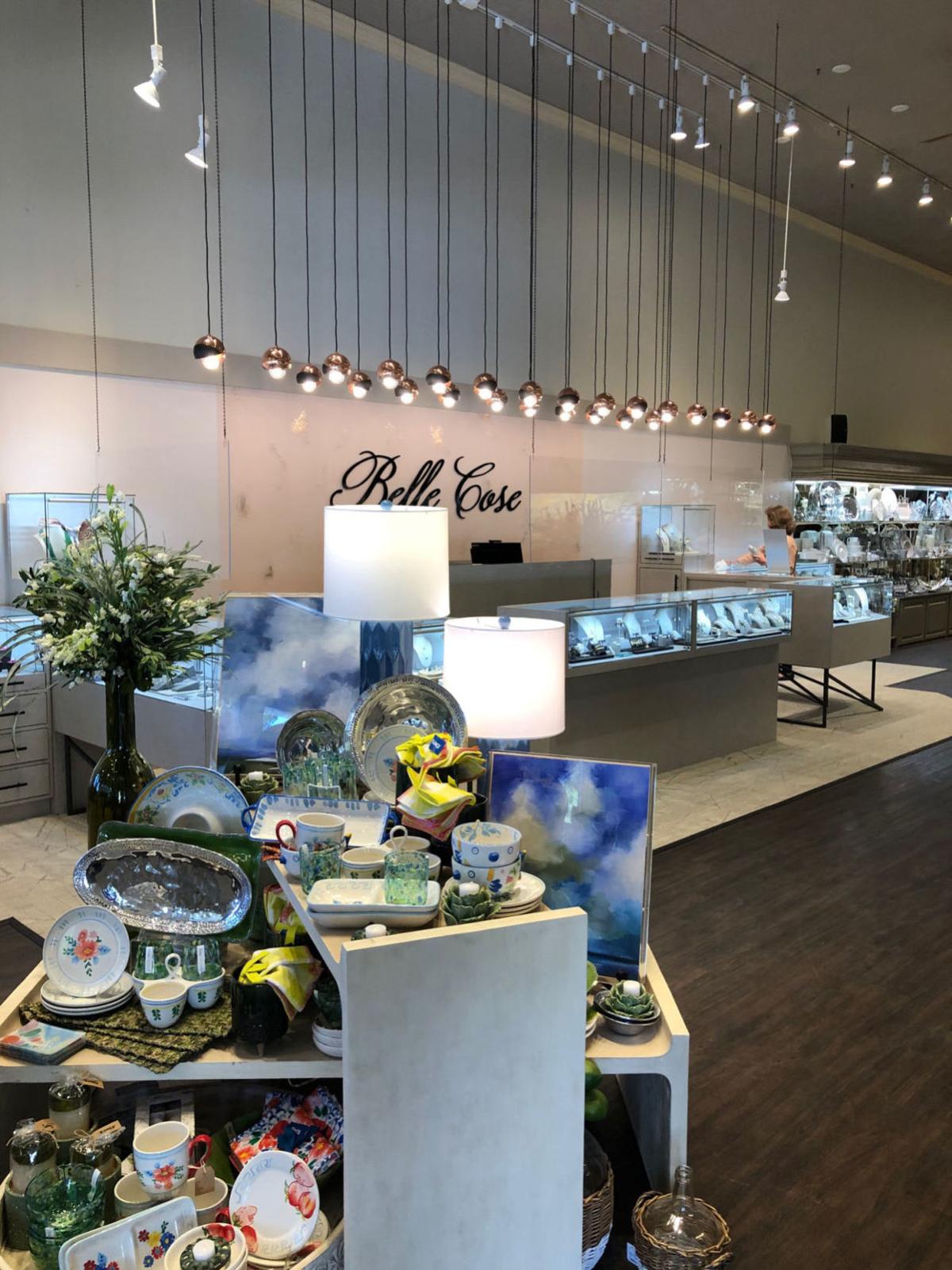 The jewelry area of Belle Cose’s flagship store on East Broadway was freshened up in one of several projects at the company this past spring. 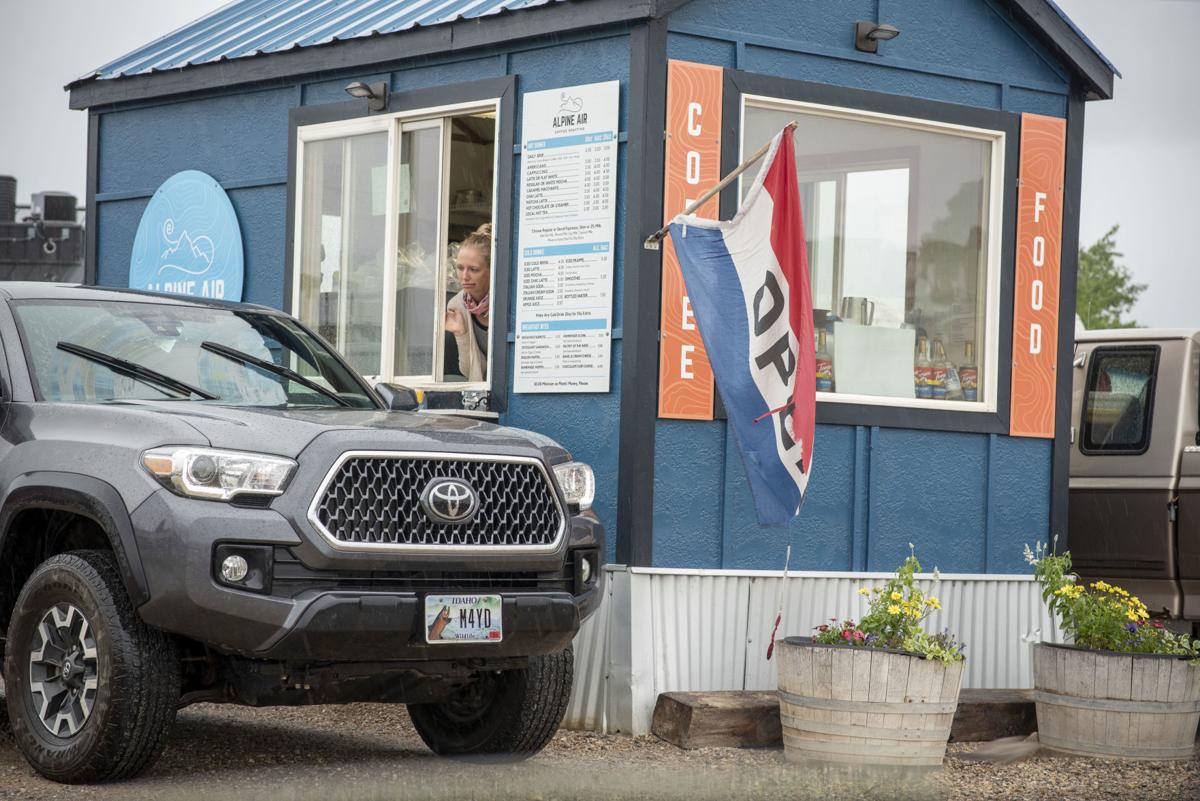 Several businesses took advantage of the forced COVID-19 closures to make improvements, such as the Alpine Air coffee shack in Victor. While the hut was moved for the plumbing work, several employees painted the exterior, overhauled the counter space and put installed a new refrigerator.

New West KnifeWorks’ flagship retail store at 98 Center St. has a new outlook: It is now looking out on Town Square.

The store in the building at the northeast corner of the square expanded into the former home of Dali’s in the same building. The space has been remodeled into a gallery to display New West’s knife art. It’s light and airy, with painted antique picture frame and custom pedestals.

The front door is only 150 feet or so around the corner from the previous one, which faces Deloney Avenue. But the atmosphere is entirely different.

When Wells Fargo replaced Moo’s Gourmet Ice Cream across the street, that corner felt more like a business district and a shopping area, employees said. That and construction work in the area deterred foot traffic.

George Glod, who wears several hats at New West KnifeWorks, remembers thinking, “Man, I wonder what it would be like to be on the square.”

Employees are proud of the personality their shop brings to downtown: a business that makes its products in the Tetons and sells them on Jackson’s Town Square. “A cool, local company” is how Glod put it.

The project kept some of the New West Knifeworks’ Victor factory staff employed during the pandemic shutdown. The work went beyond the interiors: The building’s exterior has a fresh coat of paint and sidewalk railings have been upgraded.

The knife shop leads into the Mountain Man Toy Shop, with tomahawks, axes and a variety of unique wares, like a skunk hat, a beaver fur-lined vest, quill-work jewelry and a moose leather purse.

The knife shop’s previous space is now home to New West Fine Art Gallery, which specializes in the “curation and sale of contemporary art referencing the American West.” New West KnifeWorks founder Corey Milligan founded it with his friend Connor Liljestrom, whose work will be featured there.

The jewelry area in the front half of the 48 E. Broadway space has new lights, carpeting and fixtures, and the counter is newly positioned in the middle of the floor so staff can better help people browsing in the back.

Belle Cose originally planned to start a major remodel April 12 but throttled back due to economic uncertainties created by the pandemic, owner Jane Carter Getz said.

Belle Cose reconfigured the back room of the basement, an area that customers don’t see. The shipping and packing stations are rearranged so the space functions better and employees can move around more efficiently.

That area hadn’t been touched for more than 20 years, and without the pandemic lull it was something there might never have been time to tackle, Carter Getz said.

“It was nice to have that to focus on,” she said.

Come July 1 shoppers will see the results of two other projects in the works.

The space inside the flagship store that used to be occupied by Alpyn Beauty Bar is being converted into a private shopping and consultation area that also will be a place for a spouse to rest while the other is out in the store. There will be a fridge, a beer tap and a big-screen TV.

Down the street and around the corner, the cabin at 81 S. King St. is scheduled to be reincarnated July 1 as Shoppe by Belle Cose, a “concept” store where merchandise will be selected and displayed around changing themes.

The debut will be a Western-themed pop-up featuring Sunset Trails buckles and other items plus related merchandise, including books, throws, purses and other accessories.

That first themed display will stay up through September. The plan is that, after a hiatus in October, Shoppe will open again with a new theme.

That cabin used to be a Belle Cose clothing store, which is now in a building at Crabtree Corner. Moving the clothing boutique half a block closer to Town Square made a huge difference, Carter Getz said.

“Our numbers just about tripled.”

Belle Cose’s other downtown shop, Belle Cose At Home, just reopened, which means all three are back in the post-shutdown swing of things.

Perking up the coffee hut

The coffee shack at the corner of Main Street and Highway 31 in Victor, Idaho, is looking more dapper.

Alex Suckling, owner of Alpine Air Coffee Roasters, purchased the Local Joe Drive-Thru hut at the start of the year but ended up being closed March 20 through May 3 because of the pandemic.

His employees wanted hours, and he had planned to fix up the shack anyway and rebrand it to be more cohesive with the Alpine Air Coffee name. He seized the opportunity.

“It was great to be able to spruce up the place and let my employees be able to get back to work,” Suckling said.

First, he and a contractor installed a water line, which makes working in the hut easier and more efficient. Previously staff had to fill water tanks every day, a task that, especially in the dead of winter, “could be pretty brutal,” Suckling said.

While the hut was moved for the plumbing work, several employees painted it, overhauled the counter space and put in a new fridge. They also painted a nearby shed and put in new signage with the Alpine Air Coffee brand.

The weather was nice enough to do all that, and the lull added a convenience factor to the work.

“Certainly it made it a lot better not having the traffic there,” Suckling said.

When the hut reopened things were slow at first but are picking up.

“It didn’t take too long for folks to start jumping back on board,” Suckling said.