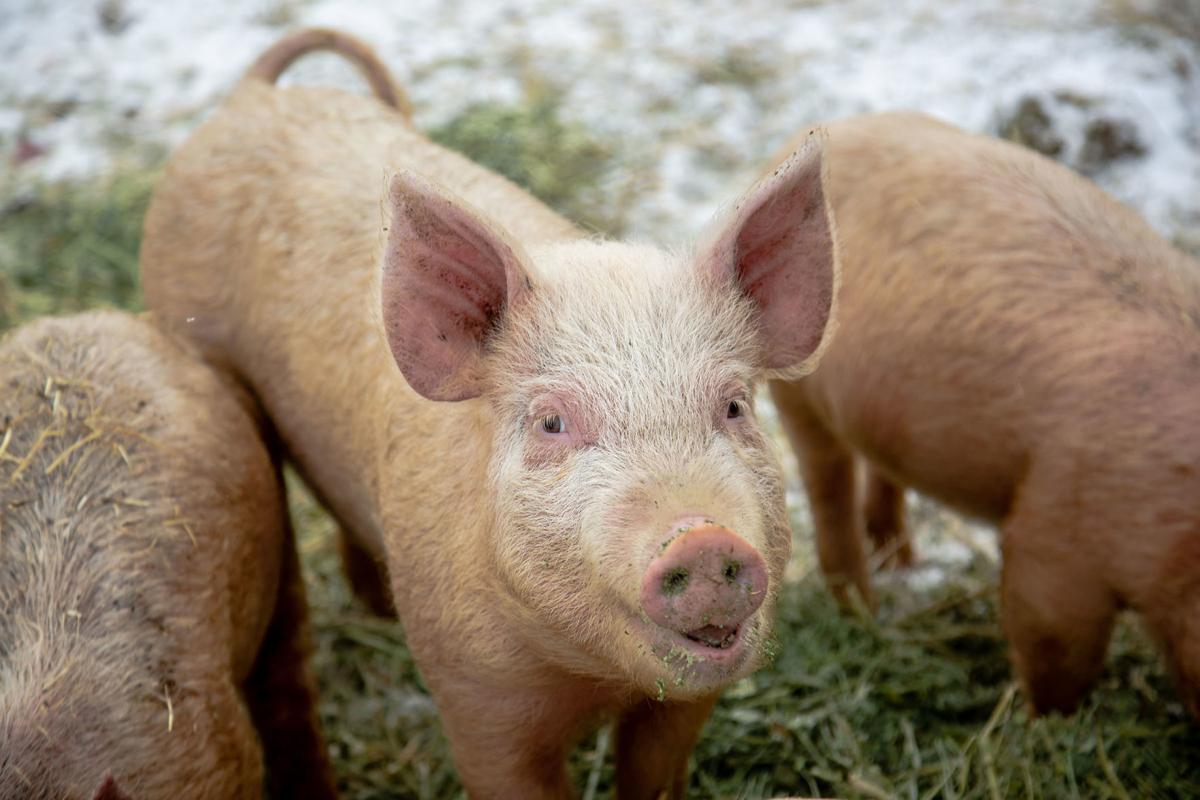 Food scraps feed the pigs at Haderlie Farms, and the rest is composted. 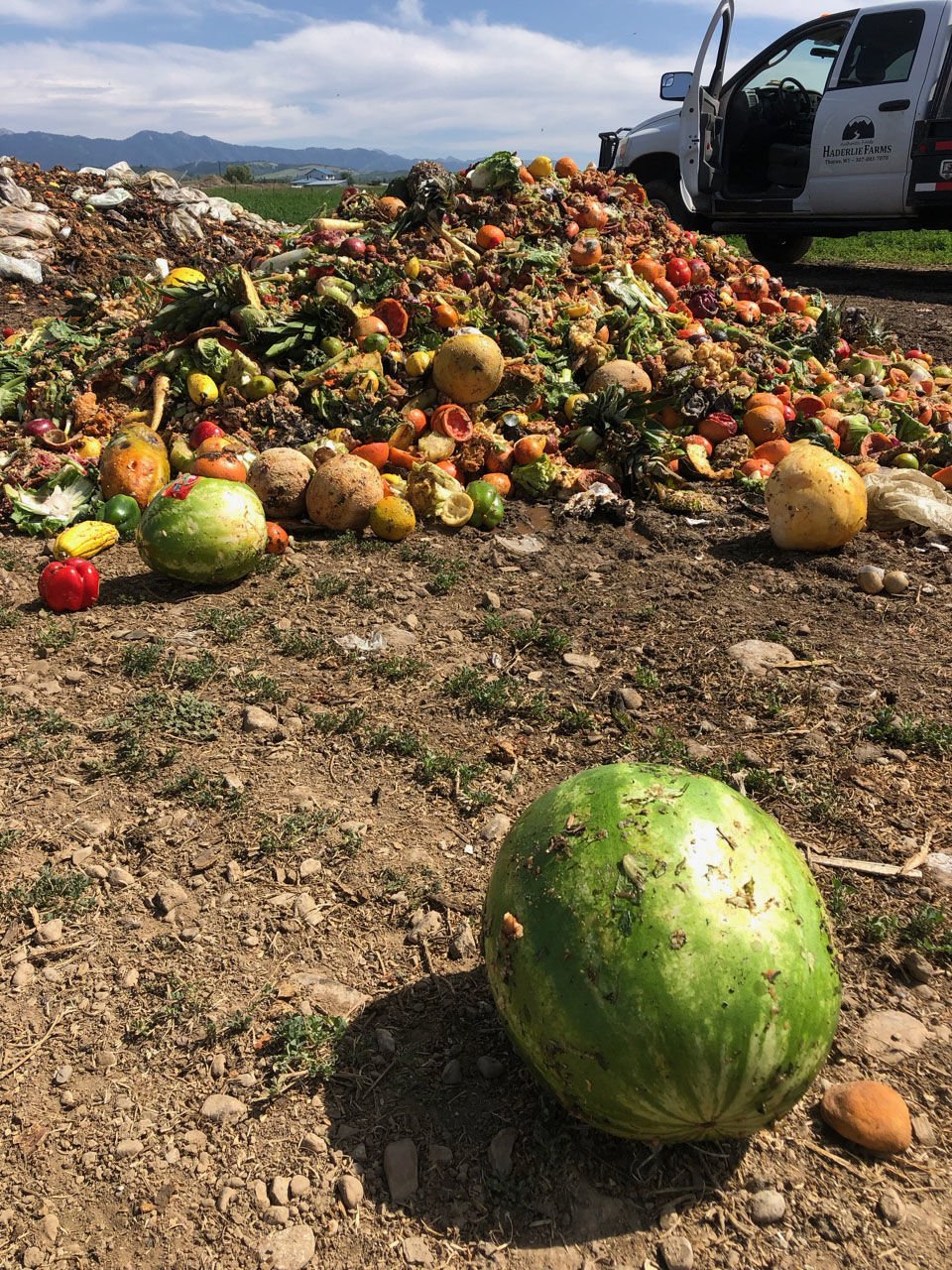 Vegetables, fruits and other food scraps will become rich fertilizer for Haderlie Farms. WyoFarm Composting has about 80 residential and 40 commercial customers. It has collected nearly 400 tons of food scraps this year.

Food scraps feed the pigs at Haderlie Farms, and the rest is composted.

Vegetables, fruits and other food scraps will become rich fertilizer for Haderlie Farms. WyoFarm Composting has about 80 residential and 40 commercial customers. It has collected nearly 400 tons of food scraps this year.

Instead of going to the dump, the soggy mass travels to Thayne, where WyoFarm Composting (motto: Grow food, not landfills) combines it with other food waste in piles that, with careful tending, decompose into a wholesome fertilizer.

Cowboy Coffee doesn’t have to work hard to make it happen. The baristas put the grounds and other food waste like banana peels and eggshells in a cart provided by WyoFarm Composting. Then WyoFarm picks it up and takes it away.

“Between brewed coffee, drip coffee and espresso it’s a lot of coffee every day that was just going into the garbage,” Ottaway said. “It doesn’t feel great to throw it into the dumpster.

“Now we just have a bucket for all the coffee and a trash bucket,” he said. “The trash is lighter, easier to manage and doesn’t have to be taken out as frequently.”

WyoFarm Composting, which offers food scrap pickup for residents as well as businesses, is part of a trend. All over the U.S. composting is gaining popularity as people see the environmental benefits.

According to a report by the U.S. PIRG Education Fund, “Composting can help tackle global warming by diverting organic waste away from landfills where it produces methane, by helping plants and microorganisms, which pull carbon dioxide out of the atmosphere, to grow; and by replacing nitrogen fertilizers that produce nitrous oxide, an extremely potent greenhouse gas.”

Next spring or summer her agency will start a commercial food waste composting program. The first participants, she said, will be “early adopters,” like those involved with a recent food waste collection pilot in Grand Teton National Park, and other “interested large producers.” (The waste in that program went to the West Yellowstone Compost Facility, and a portion went to WyoFarm.)

Terra Firma Organics, a Jackson business, will be the composting contractor, and Westbank Sanitation will initially do the hauling. The interim transfer station will serve as the food waste building, but details like tip fees haven’t been worked out yet, Bell said. And it’s only a commercial program. Allowing residents to drop food waste there for composting is “probably a ways off,” she said.

An executive summary of the park composting program said food makes up 20% of the state’s waste stream and 40% of Teton park’s. Even with the county program, the region has room for other composting players, like WyoFarm, Bell said.

“There is plenty of food waste to go around,” Bell said.

WyoFarm Composting is operated by the same family that runs Haderlie Farms in Thayne, which produces vegetables, flowers, herbs, raw milk and grass-fed and -finished beef and pork.

Ali Milburn, founder of Hole Food Rescue, was thrilled when Haderlie asked her about taking food scraps. Her newly formed nonprofit was keeping still-edible items out the trash and distributing them to needy people. But it was still throwing away hundreds of pounds of food that was too rotten for people.

“For us, especially at that point but all along, it’s just been this amazing opportunity for us to actually put to use this product we’ve put a lot of energy and resources into saving from the landfill,” she said.

Milburn estimates that about 18% of the food her nonprofit rescues these days ends up as compost. That’s 18% that would have gone to the trash. And the nonprofit serves pork from Haderlie Farms at its annual Million Pound Party for a full-circle, zero-waste meal.

“It definitely fits our mission of keeping food out of the landfill and using food to its fullest potential,” she said of WyoFarm’s services.

As a business WyoFarm Composting is still fairly new.

“About a year and a half ago I decided to turn this into a business to charge for those services,” Haderlie said.

Today he has about 40 commercial customers and 80 residential customers. So far this year he has hauled more than 380 tons of food waste from Teton County.

Some feeds the farm’s 120 pigs, he said, “but we are already hauling many more scraps than the pigs can eat.”

So he has several huge mounds where vegetable peelings, fruit rinds, coffee grounds and more are transforming into what he describes as “the best fertilizer ever.”

“It’s a remarkable process that you can pile up all these different organic materials that are, in a lot of people’s opinions, stinky and yucky and, by managing it, making sure it has the proper moisture and oxygen, you can turn it into this black, very valuable substance for the soil.”

In addition to the usual suspects, like fruit and vegetable remains, WyoFarm takes meat scraps and bones, which might surprise anyone who has composted at home and been told they’re verboten.

“Meat is a problem in a backyard,” Haderlie said. “The neighbor’s dogs will come in and dig it up. ... And meat has a higher pathogen problem than broccoli.”

But with his large piles, he said, the temperature rises as high as 151 degrees for sustained periods, enough to kill weed seeds and pathogens.

“Anything over 131 — that’s the magic number,” Haderlie said.

Though meat is OK, WyoFarm Composting doesn’t accept yard waste. (Teton County Integrated Solid Waste and Recycling has a program for that through Terra Firma Organics.)

Because of “persistent herbicides,” Haderlie said, things like grass clippings aren’t appropriate for a closed-loop nutrient cycling system like his.

“We are not a composting company,” Haderlie said. “We are a farm. Our product is food. ... We pick up your food scraps, bring them into the farm, grow nutrient-dense food for people and animals, and the cycle starts all over again.”

Haderlie said WyoFarm Composting’s services are seeing rapid adoption, and part of that is the low cost. Residents pay a small fee for a 5-gallon bucket. They drop their full buckets (and grab clean ones) at specified locations for $4.75. If they opt for home pickup that costs around $6 or $7.

“We’ve tried to price this comparable to trash pickup to make it a no-brainer,” Haderlie said.

For businesses the price depends on how many 32-gallon carts they require and how often they want pickup service. One cart and one pickup a week runs about $6, Haderlie said.

“I was actually taken aback by how cheap it was for them to come pick it up,” said Holly Mackin, sustainability coordinator for the Bentwood Inn in Wilson.

Mackin said that through its overall sustainability efforts (not just composting) the Bentwood is diverting 50% of its waste and working toward the same 60% goal that Teton County seeks to reach by 2030.

With daily breakfast, bistro dinners once or twice a week, and evening wine and cheese, the Bentwood produces about 50 pounds of compostable material every week and a half, she said. Keeping that separate from the trash isn’t difficult.

“We set up a system in our kitchen that makes it really easy,” she said.

The Bentwood tried on-site composting, Mackin said, “but due to the high volume of food waste we were producing we weren’t able to keep up with converting our compost to mulch.”

Cowboy Coffee’s Ottaway said that without the pickup option he might not have gotten into composting.

“We have so much we’d have to hire someone or spend a lot of time taking it someplace,” he said.

Eco-minded residents appreciate the service too.

“I live in a condo in East Jackson and don’t have space for a composter or anywhere to use the compost I would make,” said Mari Allan Hanna.

“I also trust Curtis’ expertise and am glad to know my food scraps are going to a better place and not to waste. He has been so courageous and put in so much effort to build momentum for composting in the community.”

One glitch in the system is contamination. Residential customers are generally good about putting only compostables into buckets. Haderlie said he occasionally finds a piece of foil, but generally it’s only the appropriate stuff (see box).

But all sorts of undesirables make their way into commercial customers’ scrap piles. Knives, forks and spoons, plastic bottles, glass ramekins, ice cream cartons ... even cast-iron pans turn up in the slop.

Haderlie is working on educating businesses.

“In my experience the larger you are the more contamination there is,” he said. “That’s the learning curve.”

Other than that, Haderlie has no end of good things to say about composting.

“Compost is the original fertilizer,” he said. “What makes more sense: to take petroleum and turn it into a chemical fertilizer that you spread on your crops or take food scraps away from the landfill that are doing no one any good?”