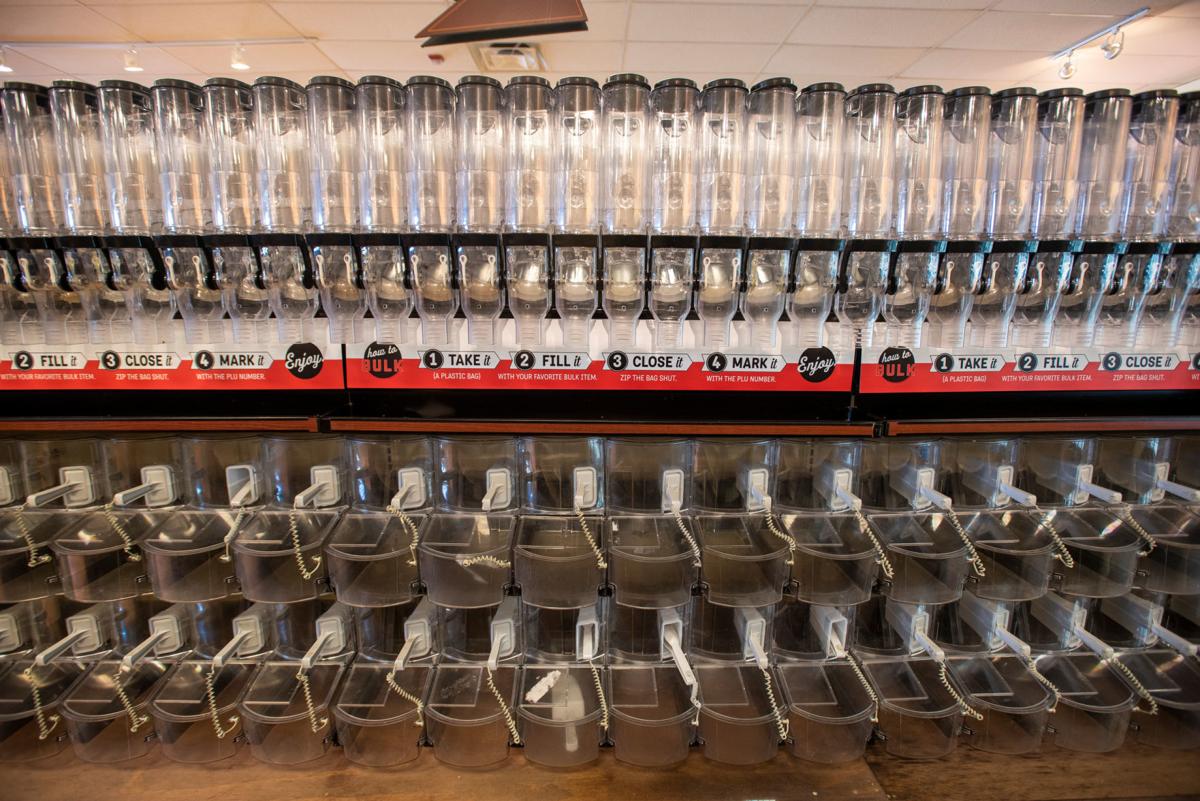 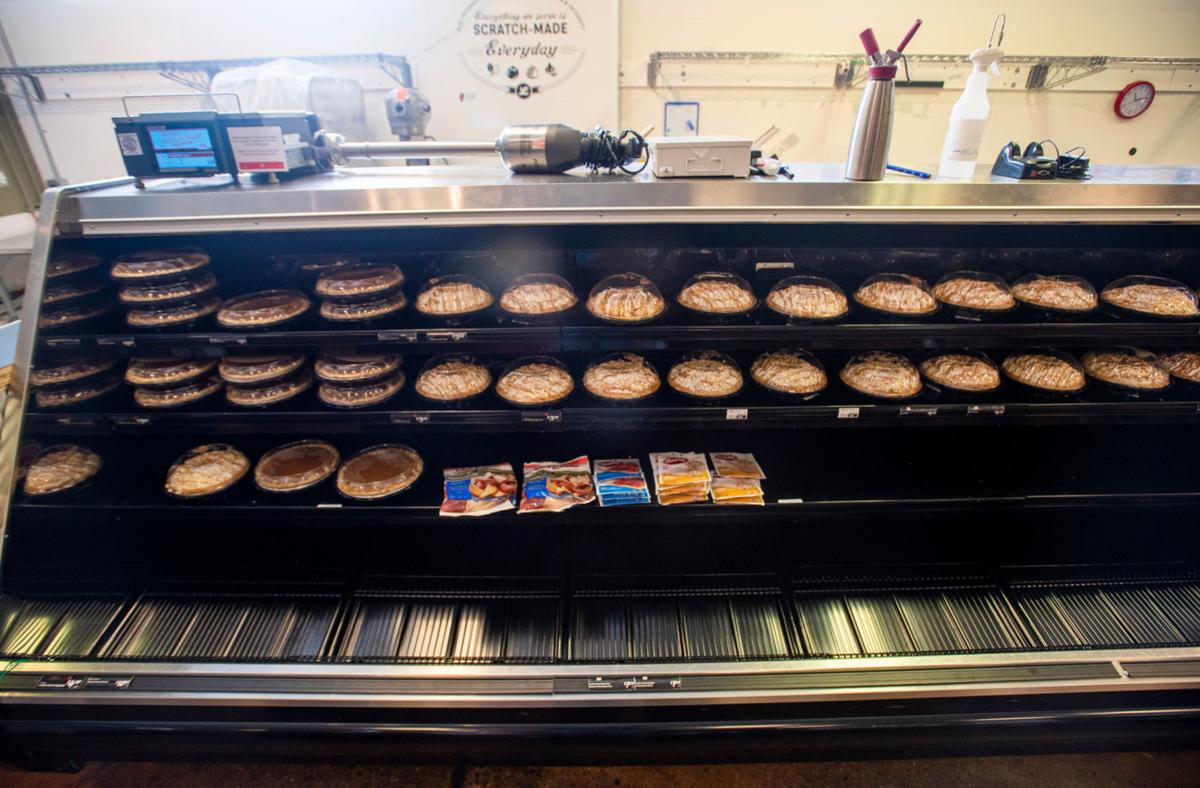 More than 50 pies line the cold storage shelf at Lucky’s Market on Friday, the few perishable food items for sale — at 75% off — on the last day of operation at the grocery store in Powderhorn Plaza. 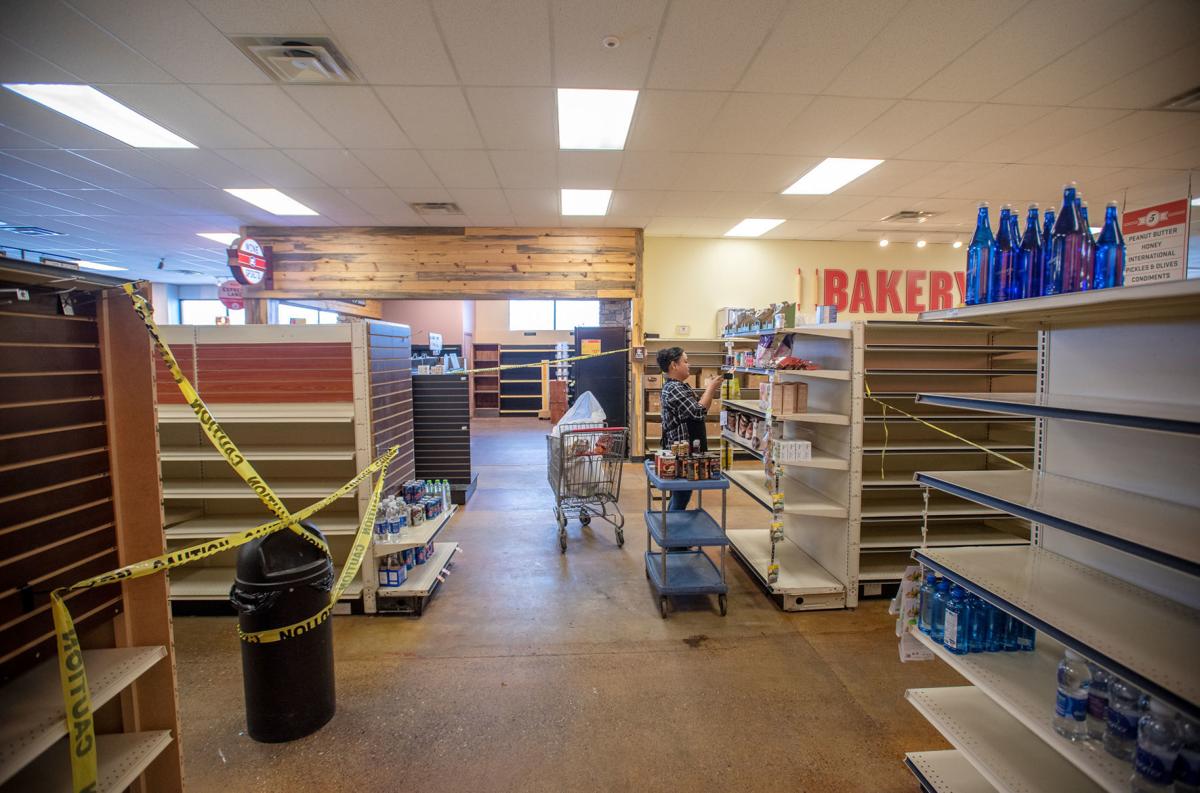 Kristine Franklin consolidates the remaining merchandise at Lucky’s Market on Friday, the final day of the grocery store’s operation. The Jackson market, which closed five days earlier than originally announced, is one of more than 30 Lucky’s that are closing nationwide after the parent company filed for Chapter 11 bankruptcy.

Most of Lucky’s Market’s shelves were bare on Friday, the grocery store’s last day of business in Jackson.

More than 50 pies line the cold storage shelf at Lucky’s Market on Friday, the few perishable food items for sale — at 75% off — on the last day of operation at the grocery store in Powderhorn Plaza.

Kristine Franklin consolidates the remaining merchandise at Lucky’s Market on Friday, the final day of the grocery store’s operation. The Jackson market, which closed five days earlier than originally announced, is one of more than 30 Lucky’s that are closing nationwide after the parent company filed for Chapter 11 bankruptcy.

The same for the 25 regular pumpkin pies lined up right below in a cold storage display at Lucky’s Market.

The forlorn pies were just part of the scene Friday as Jackson’s smallest, newest and least successful grocery store neared the last time its automatic doors would automatically whoosh open to welcome a shopper.

And it wasn’t just Jackson’s Lucky’s: The chain, started in 2002 in Boulder, Colorado, and rapidly expanding after 2012, declared bankruptcy in January. Fast growth and debt dragged the chain down, financial reporters said. Lucky’s had grown to 39 stores by 2019 after grocery giant Kroger’s bought a big share in 2016. When Kroger’s announced in January that it it would close 32 stores and sell the rest, it was owed a reported $301 million, and Lucky’s had lost $100 million in its most recent fiscal year and seen a drop of more than 10% in sales at existing stores.

Lucky’s opened in Jackson in March 2015, drawing a big opening day crowd and giving away $20,000 to local good causes. Positioning itself against the “Whole Paycheck” reputation of holistic food fad giant Whole Foods, Lucky’s billed itself as “organic for the 99%.”

In Jackson it was also seen as smaller, quieter, a step slower than the other groceries in town, even a bit easier on the eyes, not quite so fluorescently blinding as its bigger competitors, Albertsons, Smith’s, Whole Grocer.

But this past Friday the place was mostly emptied of its contents, selling what was left at 25 cents on the dollar, and a liquidator was taking low offers on the fixtures. The 15,000-square-foot place had the feel of the halftime locker room of a football team ending a long, sad 3-13 season.

“In the last couple of months it’s really gone downhill,” said Jay Nel-McIntosh, a regular who remembered happier days and stopped in to the store shortly before its closing. “They used to have great deals on organic produce.”

But for others on Friday — and the recent weeks of growing discounts in preparation for the closing — the last day was a good day to load up.

With a 30-pound deli scale under his arm and looking for a liquidator to set a price, Matt Hazard said, “You never know what you’re going to find.

“I got all their sausage casings the other day, and also a bunch of sausage seasonings,” Hazard said. “And also a couple of cutting boards.”

A woman with a wobbly-wheeled cart full of random stuff acknowledged she would miss Lucky’s, but not enough to give her name: “I’m supposed to be at work,” she said as she squeaked away.

The last day was a monument to things that just don’t sell.

There were three big jars, 8 1/2 pounds each, stuffed with Zorazalena olives, originally $42.79.

There were bulk boxes marked Republic of Tea that contained 50 tea bags each of unfavorite flavors like Watermelon Mint, Spring Cherry and Mango Ceylon. Big piles of stainless steel kitchen gear. Unmarked plastic bags of corn flakes and stuffing looking for a turkey. A surprising amount of Mountain Dew, apparently less in demand in a foodie town like Jackson than in, say, Arkansas. A steel warehouse cart, marked $80, loaded with 22 of the cheapest-looking-ever Styrofoam coolers, your pick for $6.49 each before discount.

For those in the business there was a giant produce section cooler marked $10,421 and one of those heated display cases that entice you with ready-to-eat whole chickens, only this time no chickens, just the case, for $4,770.

“I’m very sad to see the store go,” said regular Nancy Carson, who as she was checking out spied the impulse-buy display of knitted finger puppets. “I hope something equally wonderful moves in.”

She took 15 of the finger puppets at a prediscount price of $3.99 each.

You never know, she said. Grandchildren.

And as the conveyor belt moved the last of Carson’s purchases within reach of the clerk, here came a pumpkin chiffon pie.

On February 7, after almost five years of operation, Lucky’s Market in Jackson closed its doors, one of more than 30 Lucky’s nationwide to clo…

In 1987 Larry Huhn was passing the place where Lucky's Market recently closed and saw a concrete foundation being poured.

Huhn had worked at the Safeway that did business at the five-way intersection, later the home of Albertsons and now Staples and Dollar Tree. He was thinking about opening a grocery and pulled over to take a look.

Builder John Horn walked over the introduced himself. Horn and Huhn hit it off, and by August Huhn's Foodtown was open in the space, at first only about 7,000 square feet.

Foodtown expanded in 1998 by 3,600 square feet when it took over the adjoining space of Video Express, and then a few years later the next space down, Dr. Brent Blue's Emerg A Care.

Huhn sold in 2005 to Bob Arndt, who had run the baker and cafe Harvest at 130 W. Broadway, which most recently was home to an art gallery. Arndt and his wife, Melanie Harrice, renamed the grocery store Jackson Whole Grocer in early 2006.

Arndt sold the grocery and the name a few years later to the Rice family, which continued business there for several years. In 2012 Whole Grocer owner Jeff Rice bought land down the road where Sunrise Hardware had done business and built the store where it still operates.

Gannett Horn heads Horn Enterprises, the family business that owns the space where the string of grocery stores has done business.