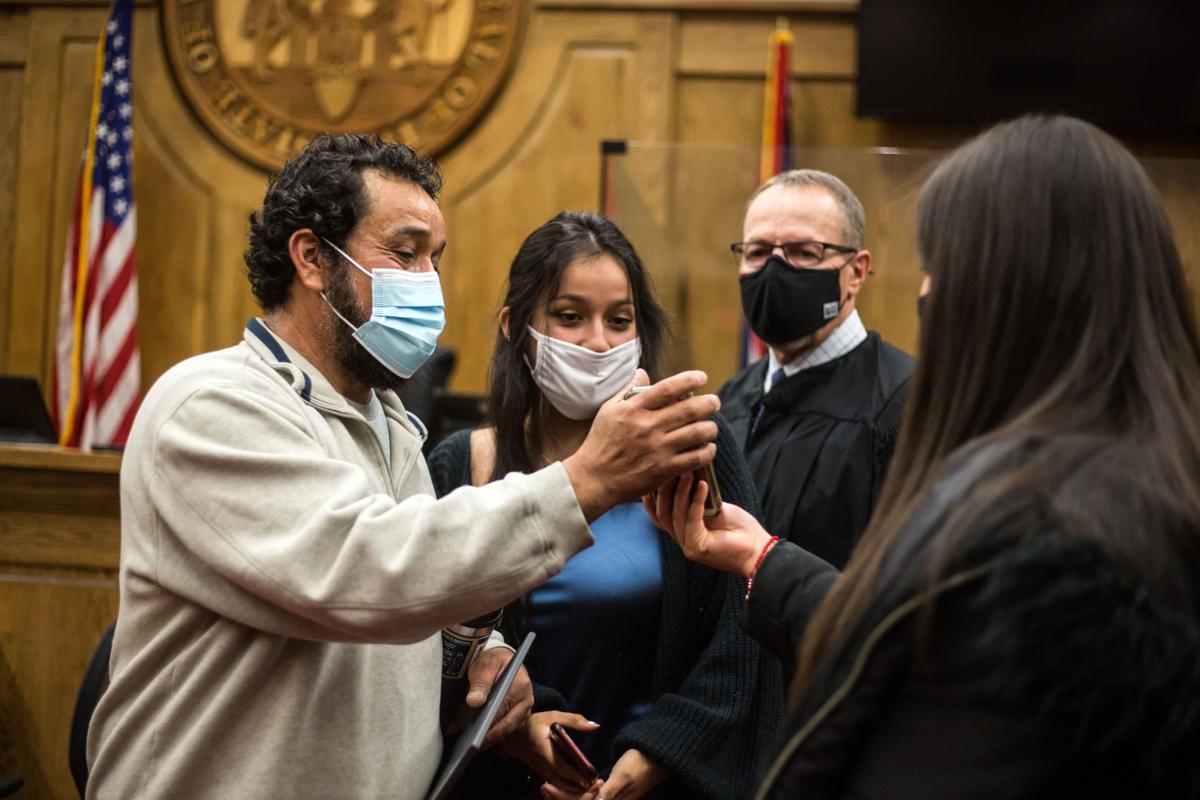 Javier Maldonado, along with his daughters Jasmine and Dulce, introduces his son Xavier to District Court Judge Timothy Day on FaceTime last week during Maldonado’s treatment court graduation. Maldonado’s son is away after having joined the United States Marine Corps. 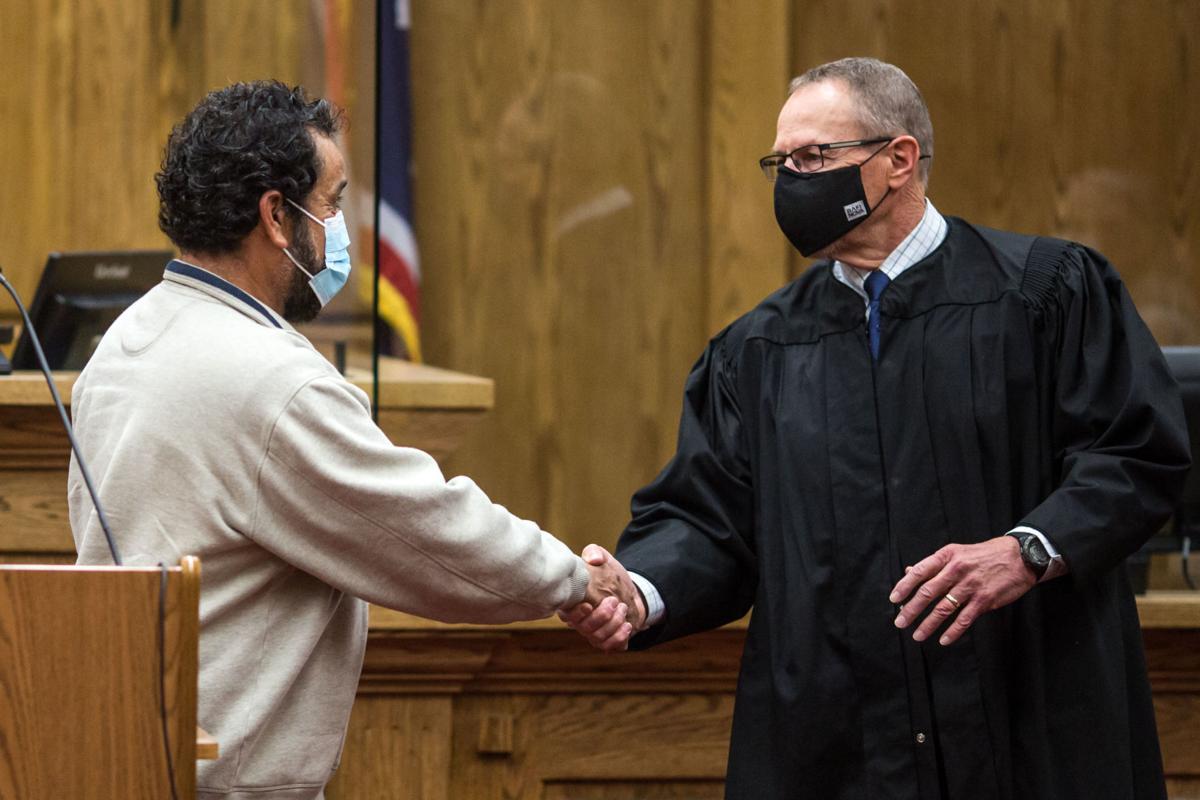 District Court Judge Timothy Day congratulates Javier Maldonado last Wednesday upon his successful completion of the treatment court program. Maldonado is the first graduate of 2021 and the program’s 96th graduate. 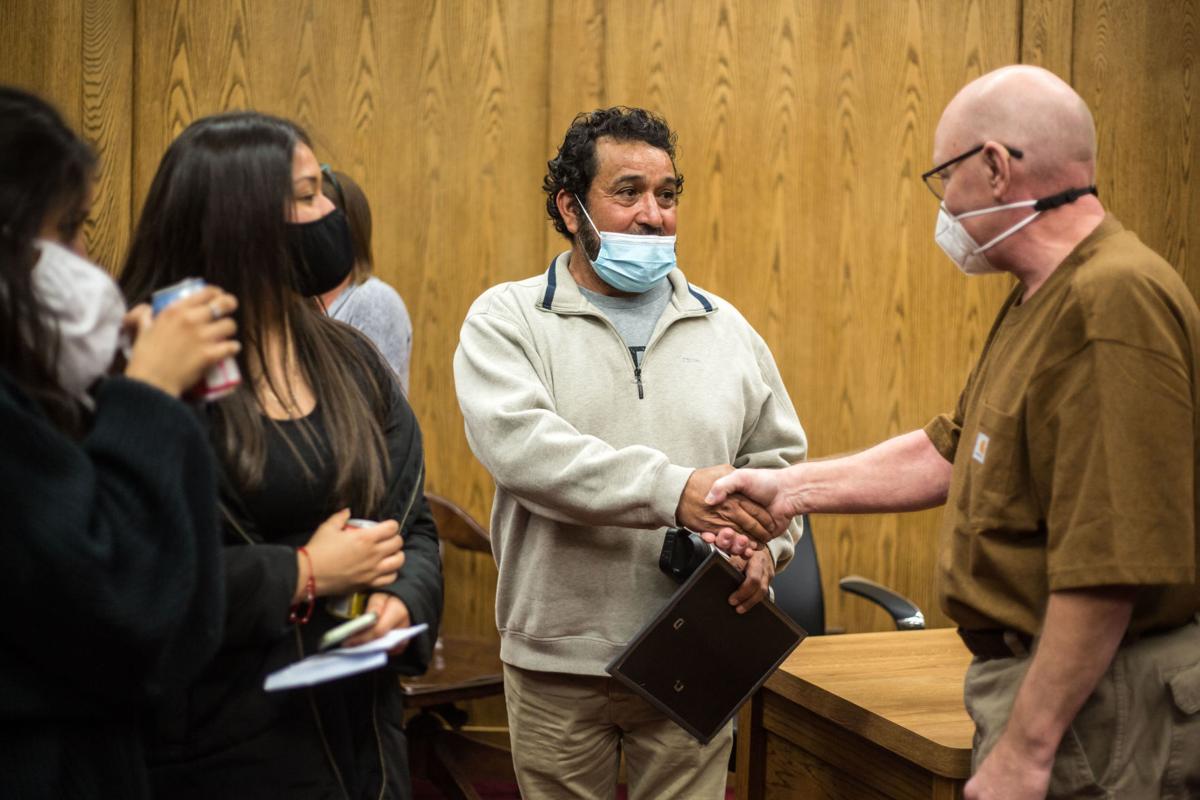 Javier Maldonado, along with his daughters Jasmine and Dulce, introduces his son Xavier to District Court Judge Timothy Day on FaceTime last week during Maldonado’s treatment court graduation. Maldonado’s son is away after having joined the United States Marine Corps.

District Court Judge Timothy Day congratulates Javier Maldonado last Wednesday upon his successful completion of the treatment court program. Maldonado is the first graduate of 2021 and the program’s 96th graduate.

After two years in one of Teton County’s most intensive probation programs, Javier Maldonado has a new lease on life.

A father of three, Maldonado originally entered the court system after a series of violent crashes that resulted in DUI charges. In 2016, he was hit by a car while crossing Highway 89 intoxicated, which left the 51-year-old hospitalized in Utah for several months and forced his daughters to leave school to come see him.

His eldest daughter, Jasmine, said it was hard to focus on her studies and difficult to maintain a relationship with her father because of his alcohol addiction. When district prosecutors offered Maldonado drug court as an alternative to incarceration, Jasmine saw it as a lifeline and pushed her father to try.

“I didn’t know how else to help him,” she said at the Teton County Courthouse last Wednesday.

The Jackson Hole High School alum was there for a celebratory moment: her father’s graduation from Teton County’s Court Supervised Treatment program. It was the first court proceeding the public could attend in person since the pandemic started, and Jasmine spoke in front of a crowded room of former graduates and friends.

“Today I’m very grateful and thankful to everyone,” she said, holding back tears as she looked to her father. “He’s a great guy. He’s really funny.”

Then she took a seat and District Court Judge Timothy Day gestured for her father to make his way to the podium. Drug court is a difficult, intensive program, Day said, reminding everyone gathered that graduation is not guaranteed.

Through rigorous accountability, drug courts help nonviolent offenders with substance use problems find long-term sobriety, which in turn reduces recidivism and improves public health and public safety. Day said that in 17 years of running the program here, there has not been a single new DUI arrest of a former participant.

Maldonado, who moved to the valley in 1994 to work in construction, was originally scheduled to graduate in December, but two days before the ceremony, his boss called to tell him not to come in.

“I lost my mind,” the construction worker said. Then, he started drinking. He’d worked for that boss for 11 years.

His daughter called but he didn’t answer, so she showed up to his house, finding him in a drunken stupor. She called the probation officer.

Maldonado was understandably frustrated, though mainly with himself. Looking back on that time now, he sees it as a blessing in disguise.

“I realized that if she didn’t call I’d probably still be drinking,” he told the News&Guide.

In the six months since, he has worked with counselors at the addiction treatment center Curran-Seeley to find other coping mechanisms. When something rattles him now, he’ll paint landscapes or take a drive and smoke a cigarette — giving himself time to cool down.

As Maldonado stood in the courtroom Wednesday, he was greeted by a round of applause and presented with a certificate plaque in recognition of his formal completion of the program.

“It really has been a pleasure to have you,” Day said. “You’ve been engaged and earned the respect and admiration of every single one of our drug court members.”

Over the past two years, the graduate has had 650 drug and alcohol tests, 46 court appearances and 150 supervision contacts, according to Judge Day. Maldonado also performed 70 volunteer hours, 40 of which were spent teaching his children how to garden on a plot at the community garden. As the squash, celery and cilantro grew, they shared their harvest with the local Jackson Cupboard food bank.

A representative from the National Association of Drug Court Professionals (the criminal justice reform nonprofit that advocates for drug courts like the one in Teton County) said graduates like Maldonado are particularly impressive because so much of their recovery was conducted virtually during the pandemic.

The three pillars of drug courts are intensive treatment, intensive supervision and regular accountability. That structure only works if a level of trust is established between the program participants and drug court team of lawyers, therapists and substance use counselors.

It’s normal for participants to be skeptical of the program when they first enter it, but Maldonado’s biggest hesitancy came from a more immediate concern. As a primarily Spanish-speaking Mexican immigrant he wasn’t sure his English was adequate enough to understand and succeed in the program.

In a true stroke of empathy, defense attorney Elizabeth Trefonas, who serves on the drug court team, reached out to Maldonado, using her own broken Spanish to work through the language barrier.

Addressing the courtroom on Wednesday, Maldonado thanked her, and everyone on the drug court team, for their commitment and support.

“My daughter said I needed help and I knew that I did ... I can see myself in a different place [from] before drug court to right now. And I can feel my family is with me.”

Then he turned and hugged Judge Day, who brought the first drug court to Jackson back in 2004. There have been 96 graduates to date in Teton County.

“Our graduates have shown that they can and do recover from their substance use disorder,” the judge said Wednesday. “It’s a disease that can be treated and managed and people can lean into long term recovery and contribute to the community again and to their family.”

For Day, every graduation is meaningful, not just for the transformation in the individual’s life, but for the ways it transforms the community by stopping the revolving door of incarceration and instead offering a path to reformation.

But even as Day and the NADCP champion that message, funding for the program, at least in Teton County, continues to wane.

Currently, the local drug court has just seven participants. State-based funding via the Wyoming Department of Health is supplemented by the town and county, but the program is still forced to turn viable potential participants away — people who are then subject to weaker probation and therefore more likely to end up back in prison for subsequent DUIs.

In short, folks like Maldonado are being turned away because there isn’t enough financial support.

Day said he would love to get to a “sweet spot,” of around 13 or 14 participants, which would maximize the impact of the current support network. Himself a former officer, the judge would also like to bring a law enforcement officer into that network to build up trust in that type of authority.

As the country emerges from the pandemic, more in-person graduations can take place, and more importantly, more in-person connections can occur between program participants and members of the support team like Teton County and Prosecuting Attorney Erin Weisman.

“I think much gets lost when we can’t see one another face to face ... our connection with those participants is really based upon trust and trying to help them through this path of sobriety,” Weisman said.

The attorney was particularly touched by Maldonado’s positivity and strength. At his graduation, Weisman described him as a true “family man,” adding, “I wish you all the best. You have wonderful things ahead of you, I’m sure.”

With nearly three decades of construction experience, Maldonado is now studying to earn his electrician certification. He has a new car, and he is helping take care of Jasmine’s new dog, a German shepherd named Apollo.

Last month, he was able to visit his sister in Mexico City. She had been on a ventilator for nearly three months due to a bout with COVID-19. In March, she was finally walking around. He was able to hug her.

Most importantly, he’s repaired the relationship with the only family he has in the States — his children.

Before he was sober, the shame of drinking was so salient Maldonado wouldn’t pick up the phone when his children called. Now, the graduate said he talks with them every day.

Editor's Note —  This story has been updated to accurately reflect the details of a the 2016 collision that put Maldonado in a Utah hospital.

“I can see myself in a different place [from] before drug court to right now. And I can feel my family is with me.” — Javier Maldonado Drug Court Graduate