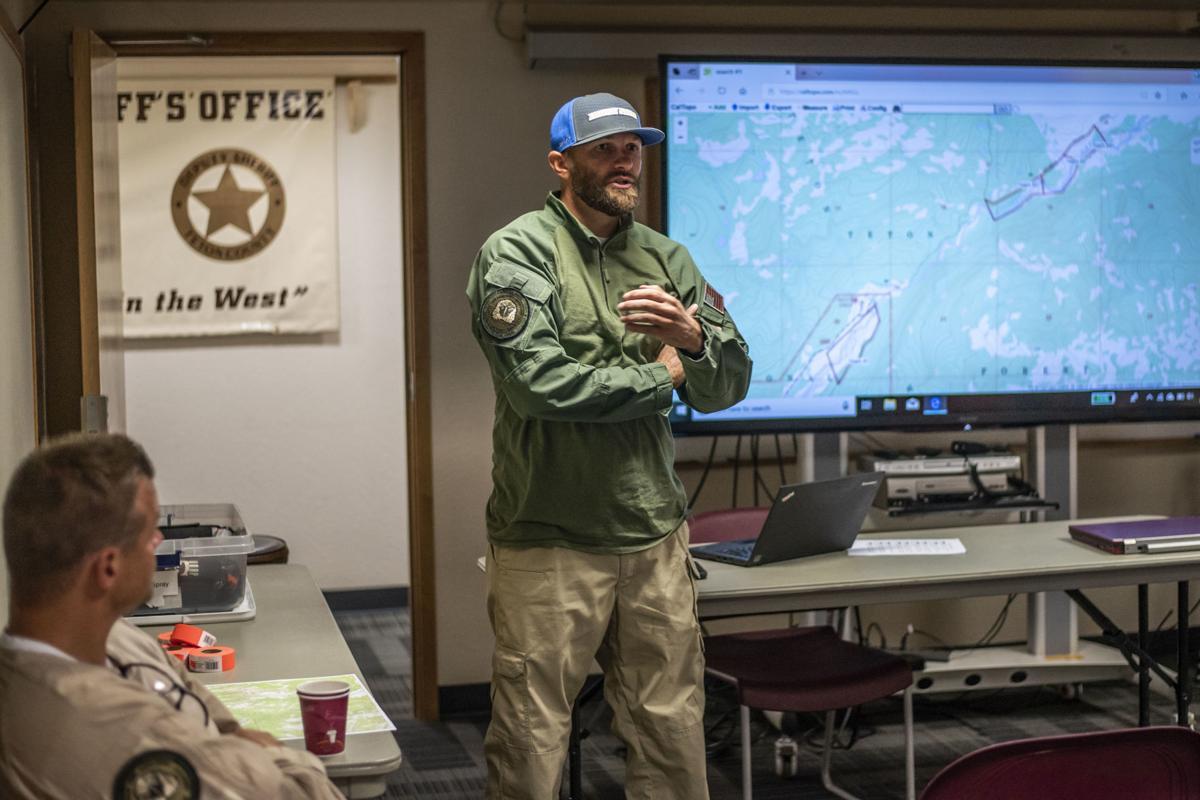 Pete Thompson, supervisor deputy U.S. Marshal with the Greater Idaho Fugitive Task Force, briefs law enforcement members Tuesday. They were about to leave the Teton County Sheriff’s Office in Jackson to search near Pacific Creek for the remains of Gerald Michael Bullinger — or clues about where he went. 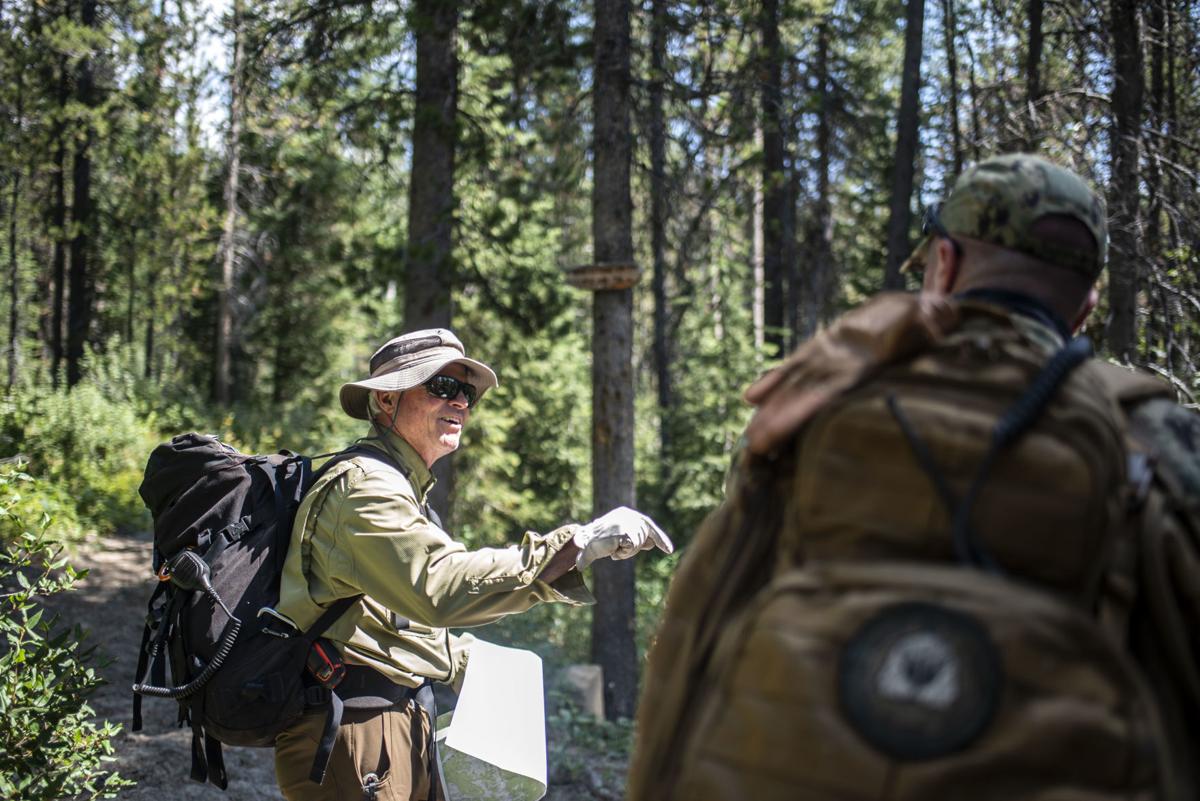 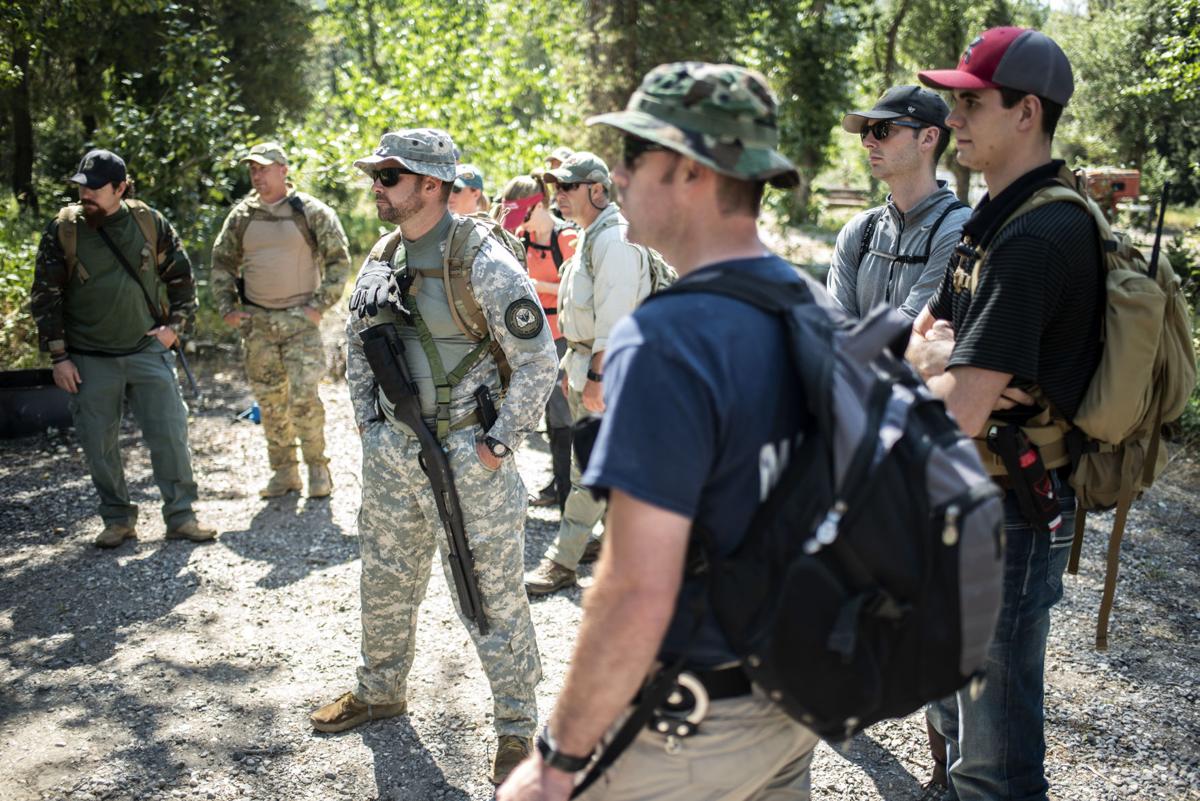 Members of various law enforcement agencies stage at the Pacific Creek campground Tuesday morning before searching for anything connected with Bullinger, wanted in the death of three women. 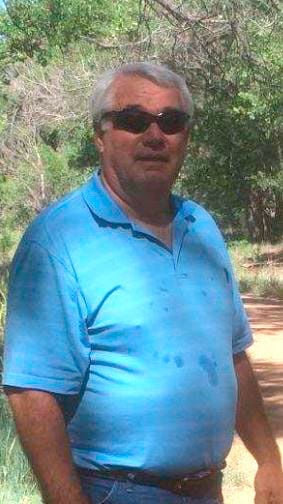 Pete Thompson, supervisor deputy U.S. Marshal with the Greater Idaho Fugitive Task Force, briefs law enforcement members Tuesday. They were about to leave the Teton County Sheriff’s Office in Jackson to search near Pacific Creek for the remains of Gerald Michael Bullinger — or clues about where he went.

Members of various law enforcement agencies stage at the Pacific Creek campground Tuesday morning before searching for anything connected with Bullinger, wanted in the death of three women.

About a mile up the hiking trail from the campground, Detective Dave Hodges came to a stop at a junction.

“At this intersection here they encountered a man with no backpack, no water, no bear spray, no nothing,” Hodges told fellow law enforcement Tuesday morning. “He looked disheveled and out of place. As he walked by he puts his head down and doesn’t say a word.”

He described a moment last year when a family of hikers might have seen a murder suspect who was on the run.

Hodges and about 20 other investigators with the Greater Idaho Fugitive Task Force and Teton County Sheriff’s Office are searching in the Bridger-Teton National Forest this week for Gerald Michael Bullinger, a suspect in a triple murder.

“We are confident that he stayed in this area,” said Pete Thompson, supervisor deputy U.S. marshal with the Greater Idaho Fugitive Task Force. “We think the search we’re doing will be productive. Otherwise we wouldn’t be here.”

Thompson’s investigative team drove here from Boise to team up with local deputies to zero in on about a 4-mile radius northeast of Pacific Creek Campground.

Bullinger has been missing since a grisly crime scene was discovered in Canyon County, Idaho, over a year ago.

The 60-year-old is wanted in the murders of his wife, 57-year-old Cheryl Baker, his supposed girlfriend, 48-year-old Nadja Medley, and her daughter, 14-year-old Payton Medley, all of Ogden, Utah.

“This search is important for the families of the deceased,” Thompson said. “None of them expected this and certainly didn’t deserve it.”

The last confirmed sighting of Bullinger, which was caught on video, was June 11, 2017, as he drove into Grand Teton National Park through the Moran entrance in his dead wife’s car.

The car was later found abandoned at Pacific Creek Campground at campsite No. 4.

“As far as we know he took no equipment with him for a long stay in the wilderness,” Hodges said.

With the help of the family who might have seen him on the trail at the junction of Whetstone Creek and Pacific Creek and cadaver dogs sniffing out a few spots nearby, investigators have narrowed their search to this immediate area.

“We’re putting a lot of eyes on a small area,” Hodges said. “That’s what we didn’t have the opportunity to do last year.”

Armed with guns, bear spray, radios, survey tape and maps the investigators split into four teams Tuesday morning and set out on foot.

“What’re we looking for? Bones, tattered clothes, a firearm,” Hodges told the others at a briefing Tuesday morning at the Teton County Sheriff’s Office before they set out into the woods. “If we do find him it’s a crime scene.”

Few developments have occurred in the triple homicide case.

As he hiked with his team, Hodges went over some possibilities.

“I think we’ll find his bones scattered,” he said. “Scavengers have had a year to work on them. The teeth would be the last to go. The skull is fairly fragile.”

A gun was found in this area a few nights ago, Hodges said, which might seem like a major break in the case, but the gun didn’t look like it had been in the backcountry for long. There’s little chance it belonged to Bullinger.

“The firearm was in good shape,” Hodges said. “It was found in the water closer to Yellowstone than Pacific Creek.”

It was also fully loaded, investigators said, and they are fairly certain Bullinger used at least one bullet on himself.

But nothing has been ruled out, even the theory that Bullinger is still alive and on the run — which is what the victims’ family members worry about.

“Once he is found I believe it will bring closure to our family and his family and everybody involved with this horrific experience,” said Mark Medley, Payton’s uncle. “I am very glad they are keeping on top of this and not letting him think he’s going to get away with it with all this time going by.”

“We’ve come full circle,” he said. “But someone hiking around could solve it.”

Last year police cleared houses in nearby subdivisions to make sure Bullinger wasn’t holed up in an unoccupied building. People who live in the region who know Bullinger from his time working here as a guide have been interviewed.

“He was a horse packer early in his life in the Yellowstone region,” Hodges said. “He worked as a guide for a couple Yellowstone outfits in the Thorofare and Lamar areas.”

Because of his familiarity with the region, Bullinger had an advantage.

He also had a big lead.

“The victims passed 14 days before we knew,” Thompson said. “Those first few days of a homicide are super important for us. We were behind the 8-ball from the beginning.”

Bullinger dumped the car at Pacific Creek, and three days passed before the bodies were discovered in a shed on his Idaho property. All three women died of gunshot wounds, the coroner said.

The campground host saw the car sitting at campsite No. 4 on June 16, police said, but it wasn’t reported to authorities until July 12.

“Bullinger had quite the head start on us,” Thompson said.

There’s some evidence investigators can’t disclose. They say it’s to protect the investigation in case Bullinger is still alive and out there somewhere.

But if Bullinger wandered into the forest in June 2017, police said, his movements would have been limited because of snow.

“We believe the snow line was almost to the campground,” Hodges said. “It’s why we don’t think he escaped that far into the wilderness.”

Investigators hope their search this week will reveal new clues. But outfitters, hikers, hunters and fishermen who recreate in the Pacific Creek area are advised look out for anything resembling human remains.

“We believe he is here,” Thompson said.