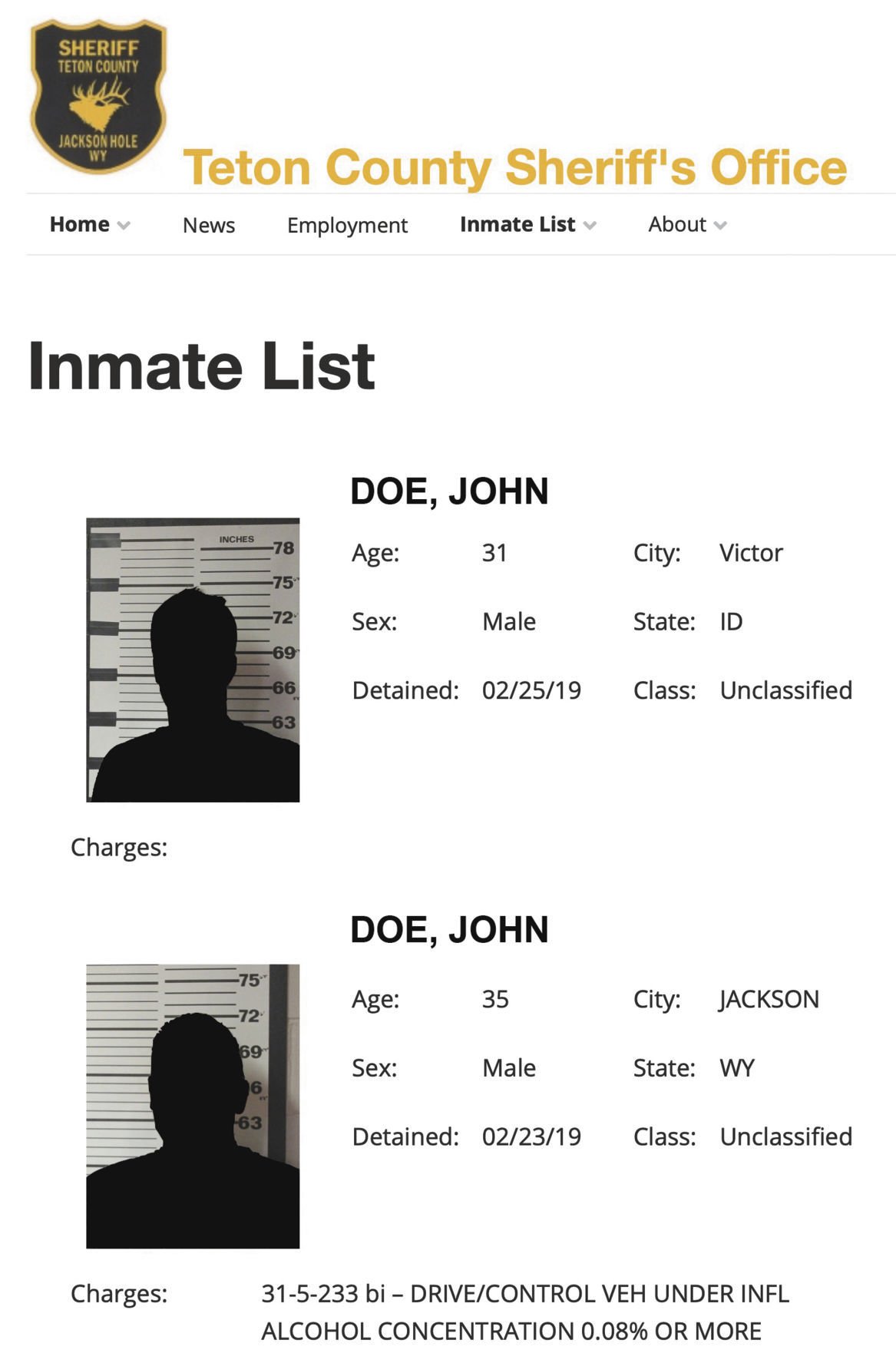 This is a representation of the Teton County Sheriff’s Office inmate list. 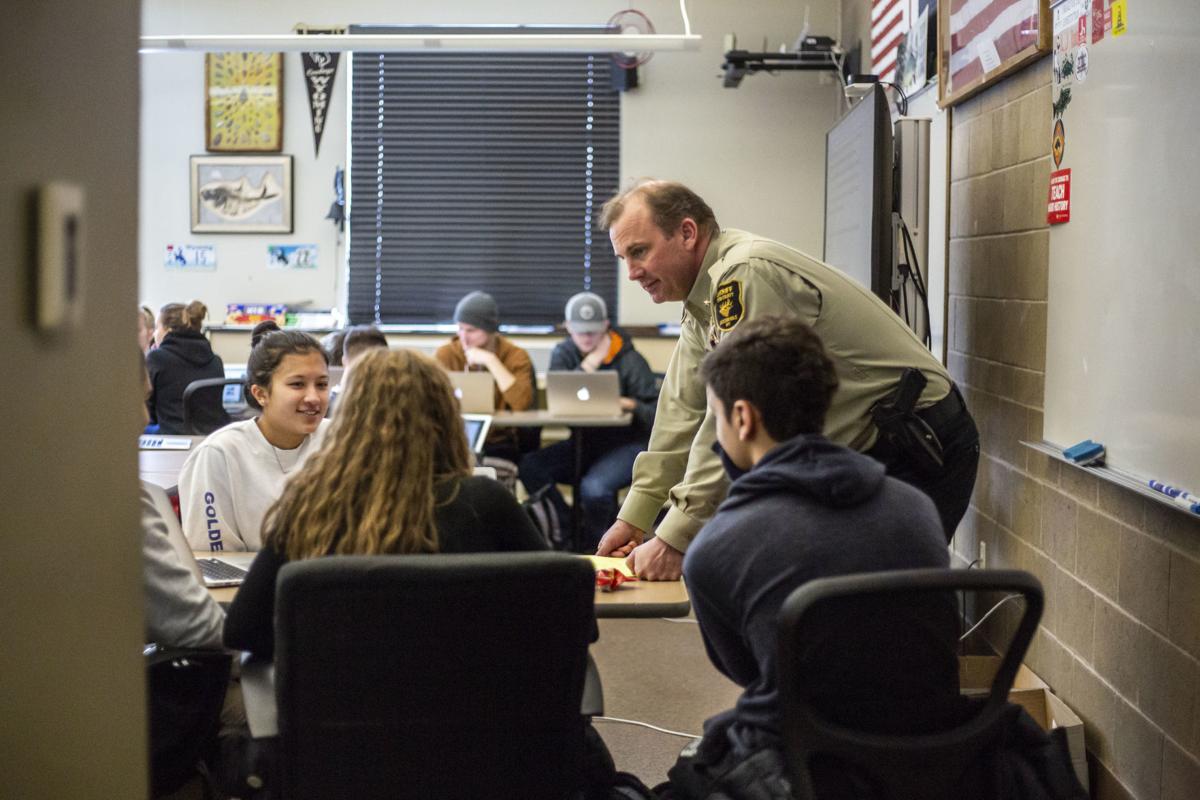 This is a representation of the Teton County Sheriff’s Office inmate list.

When Sheriff Matt Carr heard about some middle school students broadcasting the inmate list on cellphones to bully a classmate whose mother was in jail, he no longer had to mull whether the online jail log was a helpful tool or a form of public shaming.

“Hearing that story and how it affected that young lady was the driving factor for me,” Carr told the News&Guide. “It is going away.”

For months Carr has been considering doing away with the 16-year-old inmate list.

In early July the county’s most popular webpage will disappear. But there will still be an inmate locator tool, Carr said.

“It will be a searchable function,” he said. “When you go to the inmate list a search engine will pop up, and if you put in a name or date of birth you will be taken to the information regarding that inmate.”

“I know there is some value to it, and everyone will still have access to that information,” he said. “And if it’s a serious public safety issue we will use other ways to get that information out.”

When Carr went searching for opinions on the matter, many business owners said the inmate list is the first place they check if an employee doesn’t show up to work.

“This doesn’t keep people from finding out at the click of a button if a loved one or roommate or employee wound up in our custody,” he said. “What changes is the ability to see all the information at once.”

Other feedback came from Carr’s own employees.

“It was pretty split,” he said. “But I can’t get away from the fact that it’s a little bit of a public shaming forum in a small community that I care a whole lot about.”

News&Guide readers were vocal on social media about wanting the inmate list to remain. Victims of crimes said it’s a tool that gives them peace of mind and helps keep them safe.

But Carr said victims of crimes should be using VINE, a nationwide online victim notification network that allows anyone to receive alerts if an inmate is transferred or released.

Others said the webpage is a matter of transparency.

Yet Teton County Prosecutor Erin Weisman said it’s important to remember that charges are not convictions.

“An arrest doesn’t equate to guilt,” Weisman said. “And that’s where the impact of a person being arrested and on the inmate list can have some very real repercussions.”

The Teton County Sheriff’s Office inmate list was created in 2003 when Bob Zimmer was sheriff.

Zimmer is long retired, and today he doesn’t recall the inmate list being a conscious decision.

He believes it was likely developed by sheriff’s office information technology employees during a website upgrade to help cut calls to emergency dispatch from people wondering if a certain person had been arrested.

Mug shots are displayed only for inmates who are in custody. Photos are removed from the website when an inmate is released from jail. The page has 2,500 unique visitors each day on average, Teton County Sheriff’s Office IT Manager Marvin Arriola said.

Carr said the new search function will be user-friendly and simply wondering if someone was arrested is still not a reason to call dispatch or the Teton County Jail.

“Those calls overwhelm our dispatch center and jail, and we can’t go back to that,” Carr said.

According to research done internally at the Teton County Sheriff’s Office, the only other agencies with different versions of inmate lists in the state of Wyoming are Lincoln County, Sweetwater County, Sheridan County, Park County, Niobrara County and Big Horn County.

“How the sheriff decides to inform the public about who has been arrested or who is serving time in the jail, whether sentenced or awaiting court, is up to the sheriff,” Weisman said. “The sheriff will strike the balance which meets the law and best serves our community. I believe we’re all working toward the same goals — transparency and the safety of our community.”

Carr said the inmate search function is being modeled after the Mesa County (Colorado) Sheriff’s Office, which allows online visitors to find an inmate by last name, date of birth or booking number.

The search tool is still being developed but Carr said it will be forgiving, so if you’re searching for a complex name and missed a hyphen or a capital letter you’ll still find the information you’re looking for.

And although some community members suggested just revising the inmate list to only include violent criminals, Carr said opening up the debate about what constitutes a violent crime would put pressure on his staff to make decisions that could open them up to legal jeopardy.

“They can’t be the judge and jury,” he said.

Carr said the Teton County residents who want the inmate list to stay haven’t been shy to share their feedback. But same goes for those who want it gone.

“The two ends of the spectrum are very vocal,” he said. “But I just can’t justify having it anymore.”

someones woke. and where is the follow up story to of the two men who rolled the truck on teton pass. do i need to go to the court house myself ?

Hi Sean, you are welcome to go to the courthouse and sit in on hearings. I do it on a daily basis for various cases. But that particular case was continued, which is common. We will follow up when there are developments. Thanks for reading.

First place folks look for someone not showing up for work or loved ones. Really? I thought by this day and age most folks would have phones. I probably am wrong.

Unfortunately, the not showing up for work thing is true. Jackson's rather low end labor force makes this site a tool for employers who need to manage head count daily.