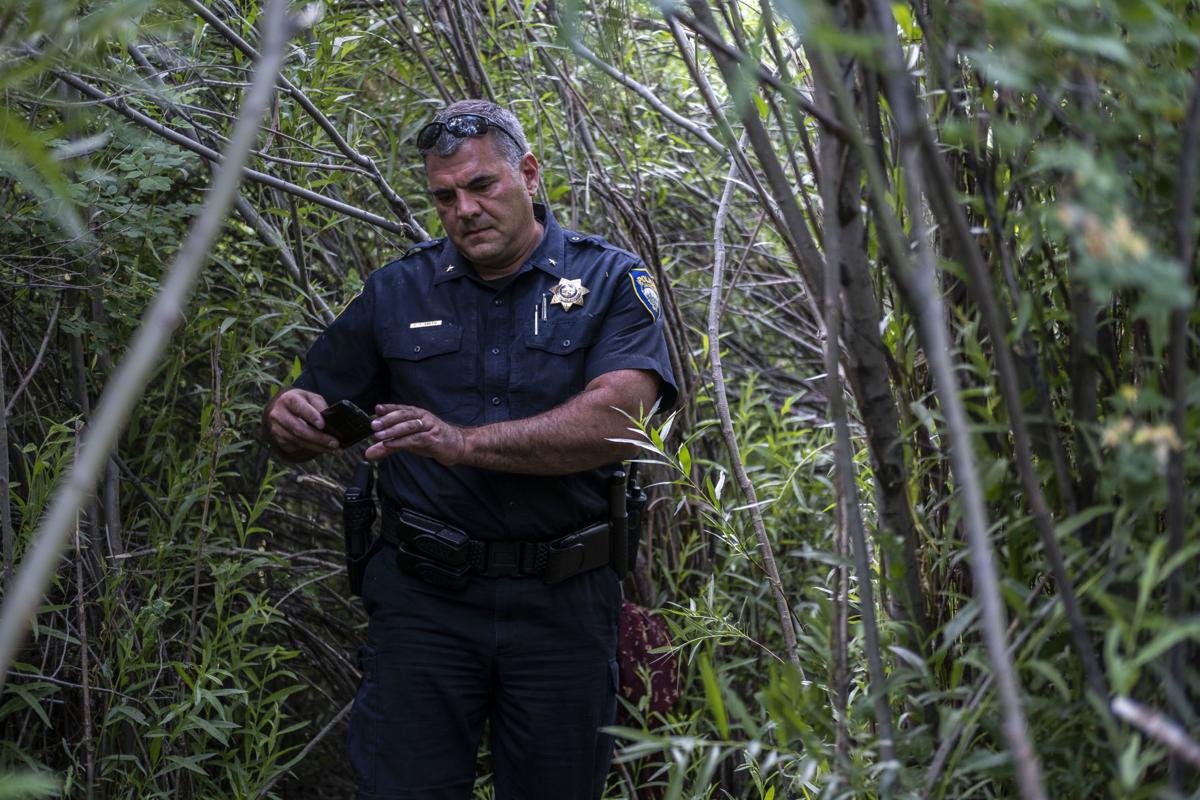 Jackson Chief of Police Todd Smith photographs garbage left behind at a campsite July 30 in Karns Meadow. Jackson police were called to check the area after an organization planning to hold an event nearby noticed evidence of camping in the park. 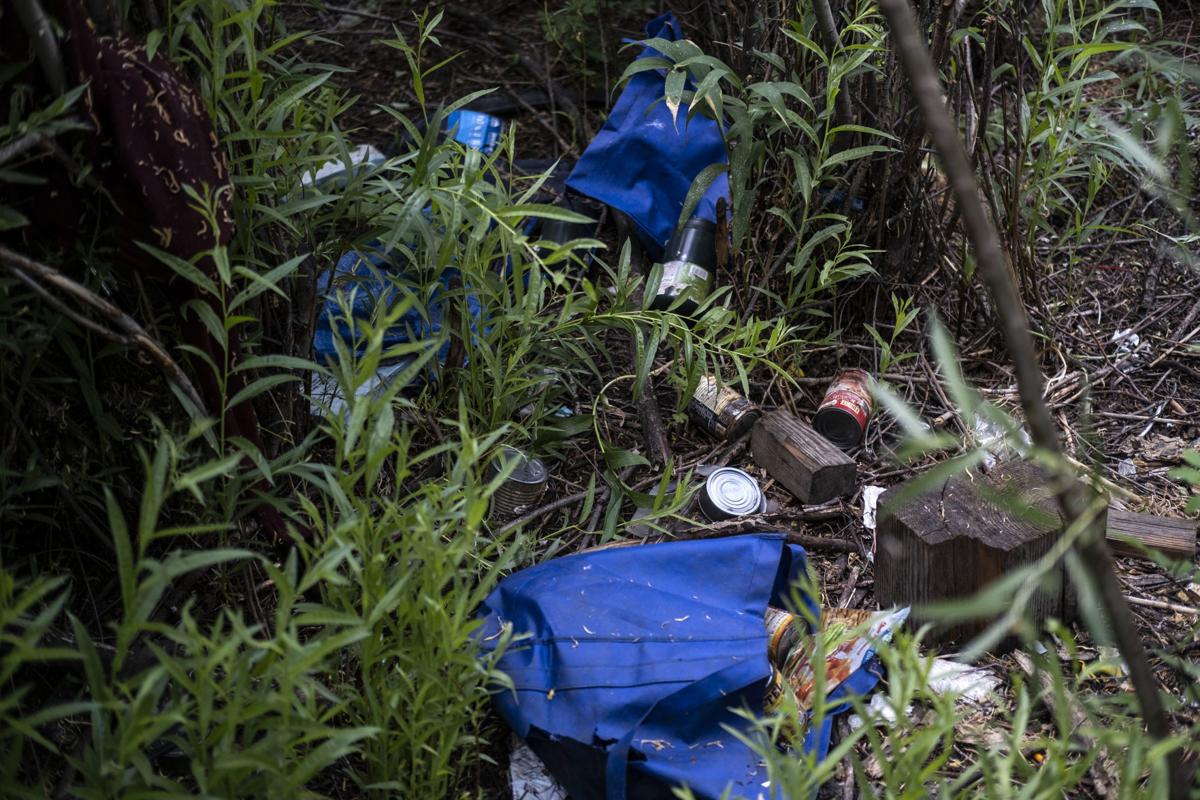 Garbage and canned goods strewn about a campsite tucked deep in the willows in Karns Meadow. 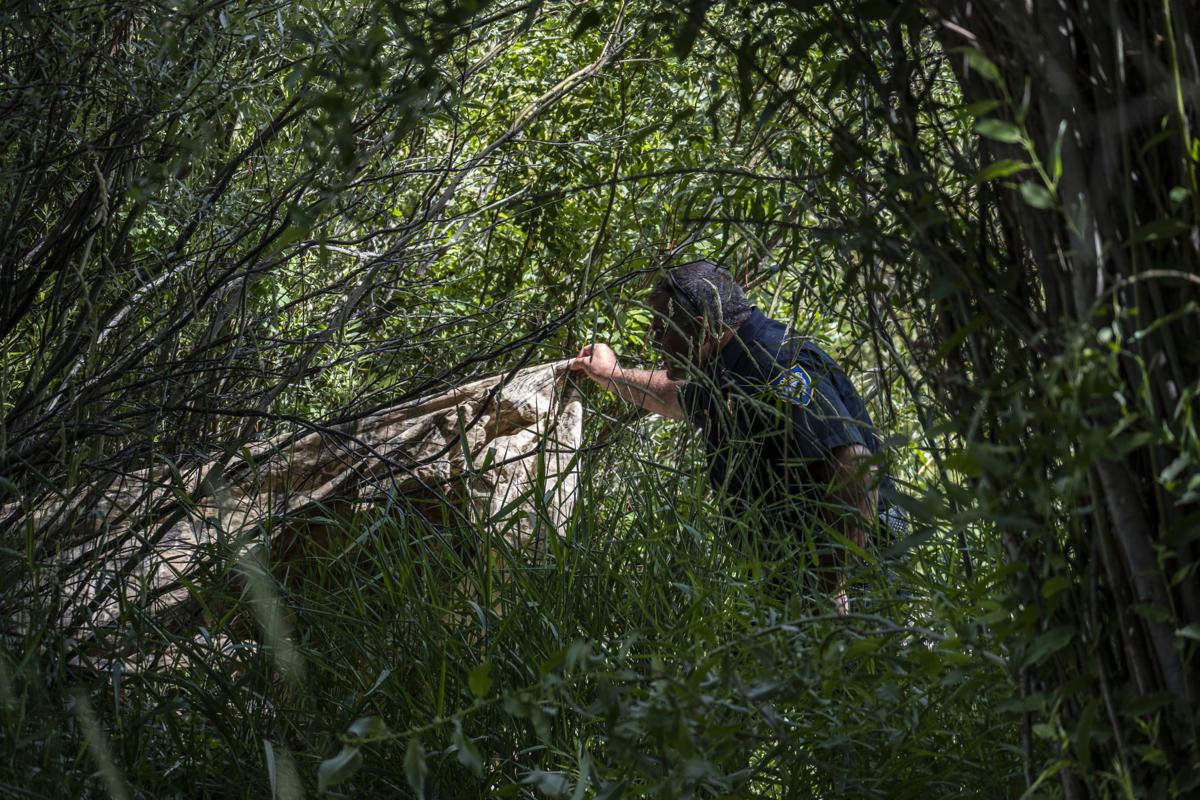 Bushwhacking through overgrown bushes and around wetlands during a recent stroll through Karns Meadow, Jackson Chief of Police Todd Smith lifted up a tarp at a homeless camp.

For years vagabonds have quietly lived in the 40-acre natural habitat in the middle of Jackson with mule deer, trumpeter swans and other wildlife.

It isn’t so much the illegal camping that the town’s top cop is worried about. It’s what the campers are leaving behind.

“There are a couple sites that are deplorable,” Smith said. “Trash, human waste, food and so on.”

To get a handle on the litter, Smith has assigned officers to start doing more patrols through the park on foot and on horseback.

“I’m not asking them to enforce illegal camping,” Smith said. “But littering is unacceptable. You can camp there and not make a mess of it.”

At any given time between May and September, Smith estimates 20 to 30 people live in Karns Meadow.

But recently, a nonprofit wanted to host a summer kids camp there and were shocked at how many homeless camps there were.

“We are holding off on displacing anyone from there for now,” Smith said. “The worst thing we can do is displace them and have them go somewhere else that’s a hazard to them or others.”

Drug use and mental illness are also growing concerns for the meadow’s human population, Smith said.

Most of the transients move on come fall and winter, as cold temperatures set in, but remnants of camps remain.

“This was not the intent for Karns Meadow,” president of the Jackson Hole Land Trust Laurie Andrews said. “It is something we need to look at holistically as a community.”

“We are empathetic that they need a place to live, but it is starting to have a negative impact on the natural resources,” Andrews said.

Different uses have been proposed for Karns Meadow in past years and the Land Trust is funding an environmental study that will gauge the effect of proposed development on the property’s wildlife habitat.

While some residents are vocal about not wanting any development in Karns Meadow, Andrews said the community seems mostly oblivious to the homeless population that calls the habitat home every summer.

Parents will take their kids fishing in Flat Creek, Andrews said, and be startled when they come across a homeless person or their camps.

“We have an issue that we need to take a look at,” Andrews said. “It is deterring people from being there and enjoying it and feeling safe. I think we need to be thoughtful about what the intent was for Karns Meadow.”

In the last 20 years police have responded to about 1,000 incidents in Karns Meadow.

“We do get calls there, and it’s everything from campfires to illegal camping to drug use, domestic calls and assaults,” Smith said. “But that’s over a long period of time. The most common calls are for camping and welfare checks.”

Although there is an ordinance that makes camping in the town of Jackson illegal, officers try to weigh enforcement with human rights.

The Jackson Police Department is keeping an eye on a pending Supreme Court case in which the city of Boise, Idaho, is challenging a 2018 decision made in the 9th U.S. Circuit Court of Appeals that barred the criminalization of homelessness.

“We want to be careful with how we enforce our overnight camping ordinance,” Jackson police Lt. Roger Schultz said. “We can’t criminalize them for who they are. It’s a balancing act between safety and an individual’s freedoms.”

While Wyoming is in the 10th U.S. Circuit, the rulings often spread across the nation as similar cases arise in different cities.

Because the U.S. Supreme Court will likely rule on the issue this fall, Chief Smith said he’d like to wait for that guidance.

“Unless there is some pressing issue to utilize the property, we have time on our side to be thoughtful with how we proceed,” Smith said.

The 2019 ruling in the 9th Circuit said cities can’t prosecute people for sleeping in public if they have no place else to go.

The Good Samaritan Mission, Jackson’s only homeless shelter, has the capacity to house about 30 men and five women.

“There is no offseason anymore,” said the mission’s men’s program director, Brad Christensen.

But the number ebbs and flows.

“I have no idea why but we do have some beds open now,” he said.

The mission works closely with the police department to house individuals, but not everyone can or wants to follow the facility’s no-alcohol policy.

Officers find that many prefer sleeping in Karns Meadow and using the mission for other needs, which is fairly easy since they’re within walking distance of each other.

“Karns Meadow is an attractive area because it’s close to downtown and it doesn’t require someone to own a car and it’s out of sight,” Smith said. “And it isn’t far from other resources like the mission to get meals and showers.”

Smith said the police department isn’t going to kick out the homeless from Karns Meadow unless elected officials order them to.

In the meantime, Smith said there’s plenty of land for everyone to share.

“That’s a big piece of property,” Smith said. “Someone could go to the west end and never experience a problem or be uncomfortable.”

Richard Gere was just in Italy telling the government to let the illegal boat people into the country. Interior Minister Matteo Salvini told the hollywood hypocrite, "Given this generous millionaire is voicing concern for the fate of the open arms migrants, we thank him: He can take back to hollywood on his private jet all the people aboard the boat and support them in his villas. Thank you Richard!"

California is a cancer and it is here in Jackson. Miller Park, Town Square and the Rodeo grounds are prime spots for homeless shelters. Then, they won't be homeless. Isn't that what you want? One or two of the big mansions on the Snake River would house the homeless in Jackson and the problem would be solved. Is Jackson going to be a sanctuary city? For the poor starving jobless homeless yearning to be free, i sure hope so! I'll donate the first tent in Town Square!

Sanctuary cities are sort of an oxymoron. Almost all of the have a large cost of living which contributes to their own homeless city. Also, it's a disingenuous bid to show off liberal credentials. People go there thinking that sanctuary means a place to stay, but all they get are cardboard shelters. I remember the Occupy Wall Street crowd decided in occupy Dewey Sq in Boston. The stench was unimaginable and this was from a distance of 100's of feet away. These places are convenient for drug dealers, sort of one-stop place to deal. But it spreads throughout the community from there. Elizabeth Warren, while she was originally running for Senate claimed she "stood with these people". She was successful, however, once they were driven out of Dewey Sq the City had to plow up and remove not only the trash, but top soil. I used to walk by there on my way to work and the worker had to wear HazMAt suits. Warren was successfully elected, but the Boston taxpayers had to foot the $11 million clean-up bill with not one cent from the State. Boston has had a serious and growing drug problem since those days. Setting aside ample public space will only be the beginning of problems Jackson isn't equipped to handle

It would truly altruistic to convert one of the JH villas into a shelter for homeless. But as you alluded to: altruism and political opportunity are strange bedfellows.

Name a place that doesn't have a homeless population. People want to dump the issue on police and say here handle it, but they aren't trained to be mental health and social workers.

No surer sign that JH is turning into California. Free needles and condoms next. Then a ride to the local voting booth in November, where their ballot will be filled out for them, a free cigarette and back to the park they go. Isn't California living just great?

Stop hiding them. Set up tents in Miller Park or the Town Square.

Bathroom facilities available in the park

Even better. How about rounding them up, give them a stipend and ship them to San Francisco. Much better climate and facilities. It should be an easy sell.

I could not agree more Patricia. Why single these people out and make them hide. The town square could easily fit 40 tents into it comfortably. A couple blue houses on opposite corners and boom. California Living. That would save us from having to hire a poop posse, like San Fran has.

Great ideas, Ken! Why stop at the town square? How many homeless could the countless unoccupied "summer place" second homes in Teton county house, during the cold winters??? By using unoccupied vacation dwellings we could easily increase our diversity by welcoming thousands more of these urban outdoorsmen/women.

Police Chief, get this under control now or you will have the problems we have in Key West.

And every other village/town/city in the nation. The homeless are not going away, their numbers grow on a daily basis.

Winter, "gets this under control" in JH.