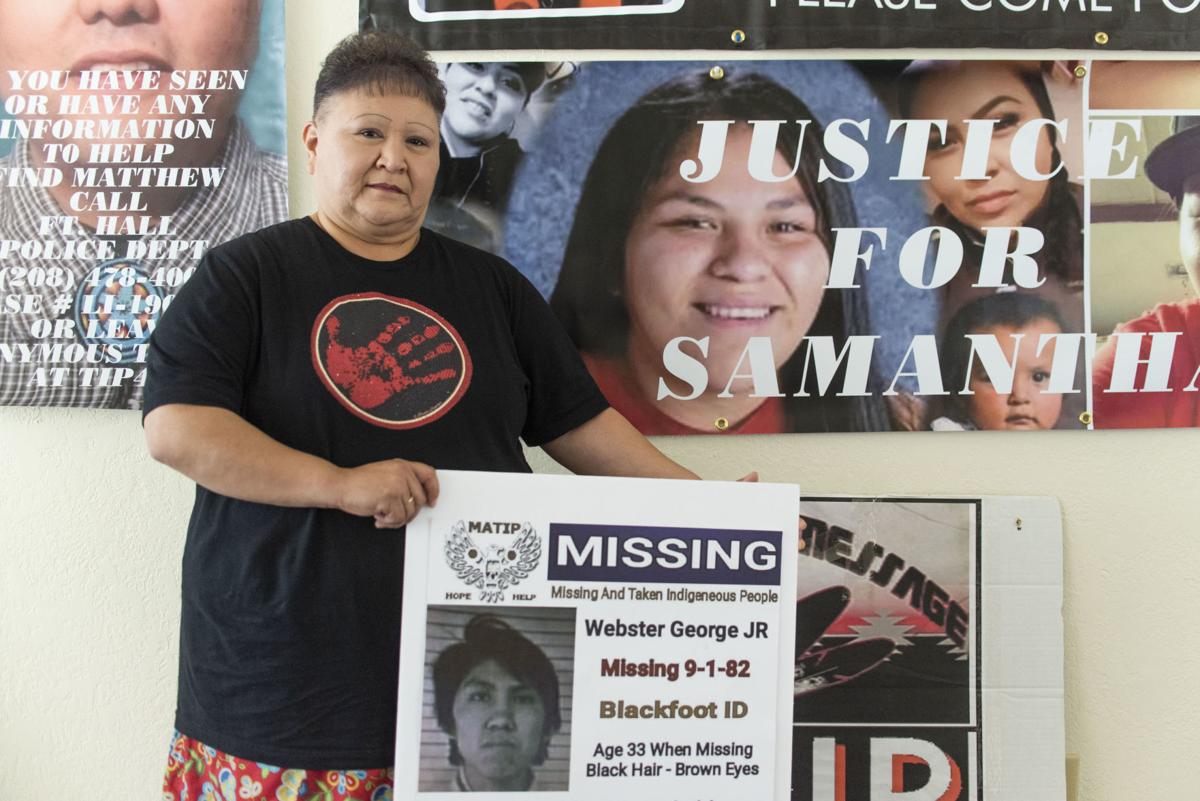 Willeena George, aunt to Samatha and niece to Webster George Jr., poses for a portrait in front of a photo of her niece while holding a missing poster of her uncle. 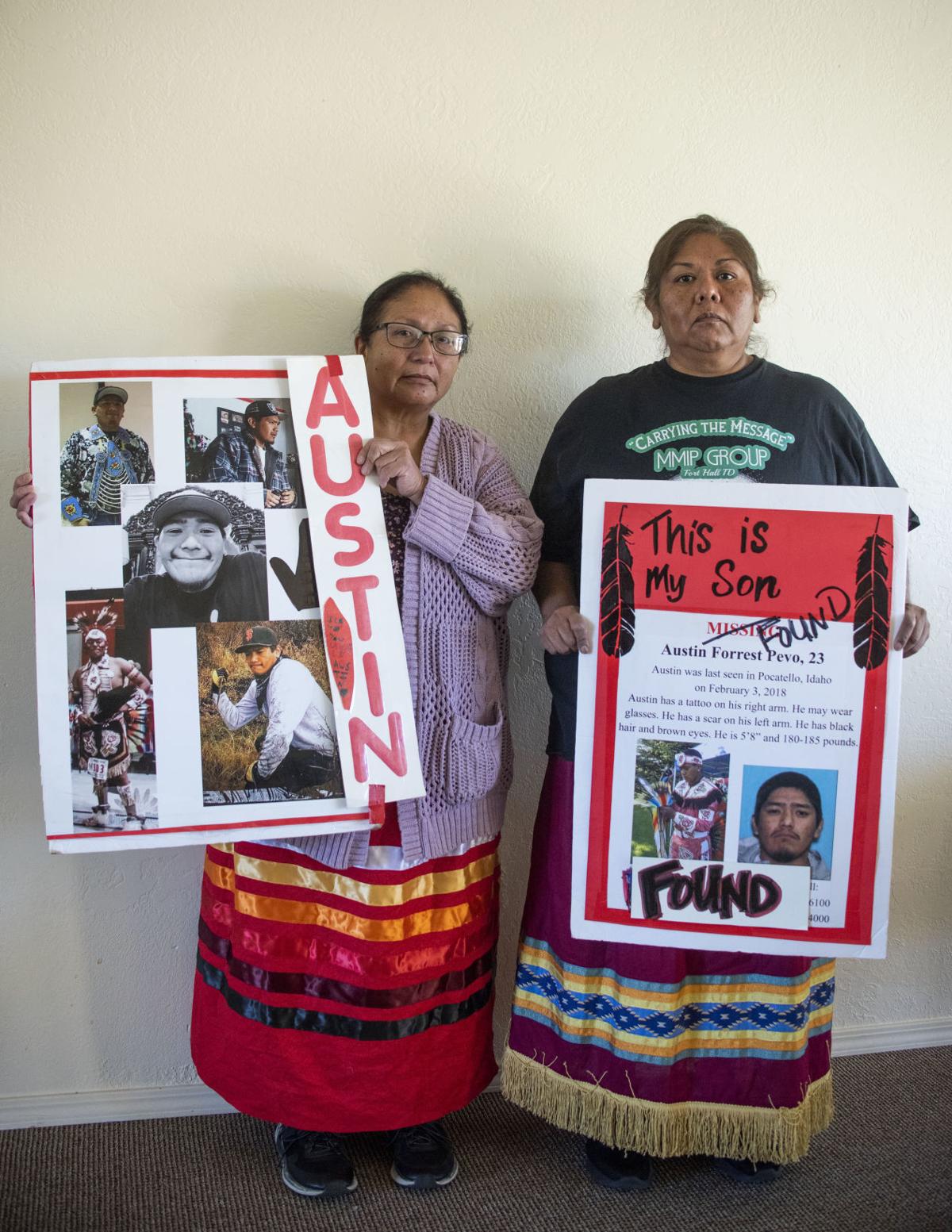 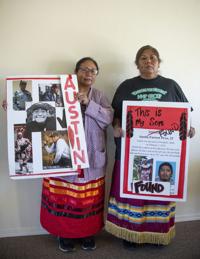 Daeda Pevo and Susan Pevo, mother of Austin Pevo, hold posters of Austin. His killer was sentenced to 27 years in prison. 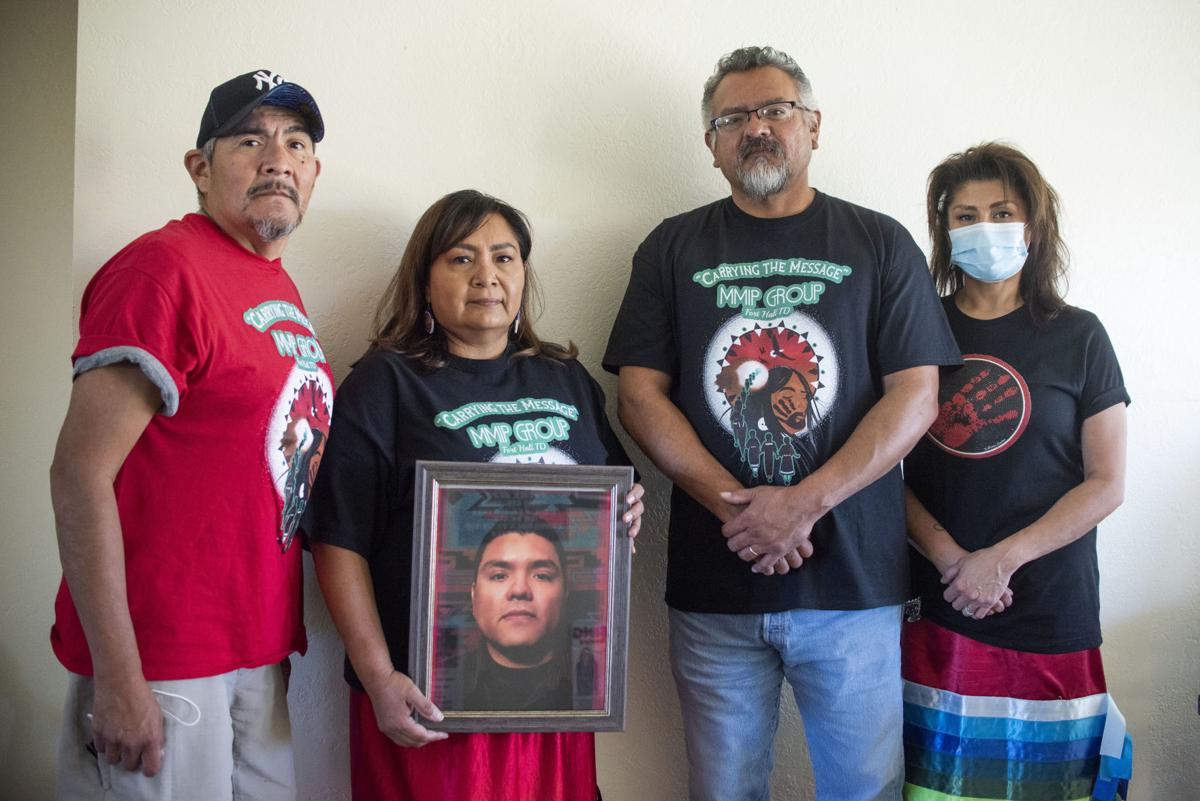 Erick Auck Jr., Cynthia Metz, Jimmy and Gretta Broncho, all family members of Matthew Broncho, pose for a portrait while Matthew’s mother, Cynthia, holds a hold of him on Sunday, Oct. 3. Matthew went missing March 20, 2019, but his case has come to a halt despite his family’s continual efforts. 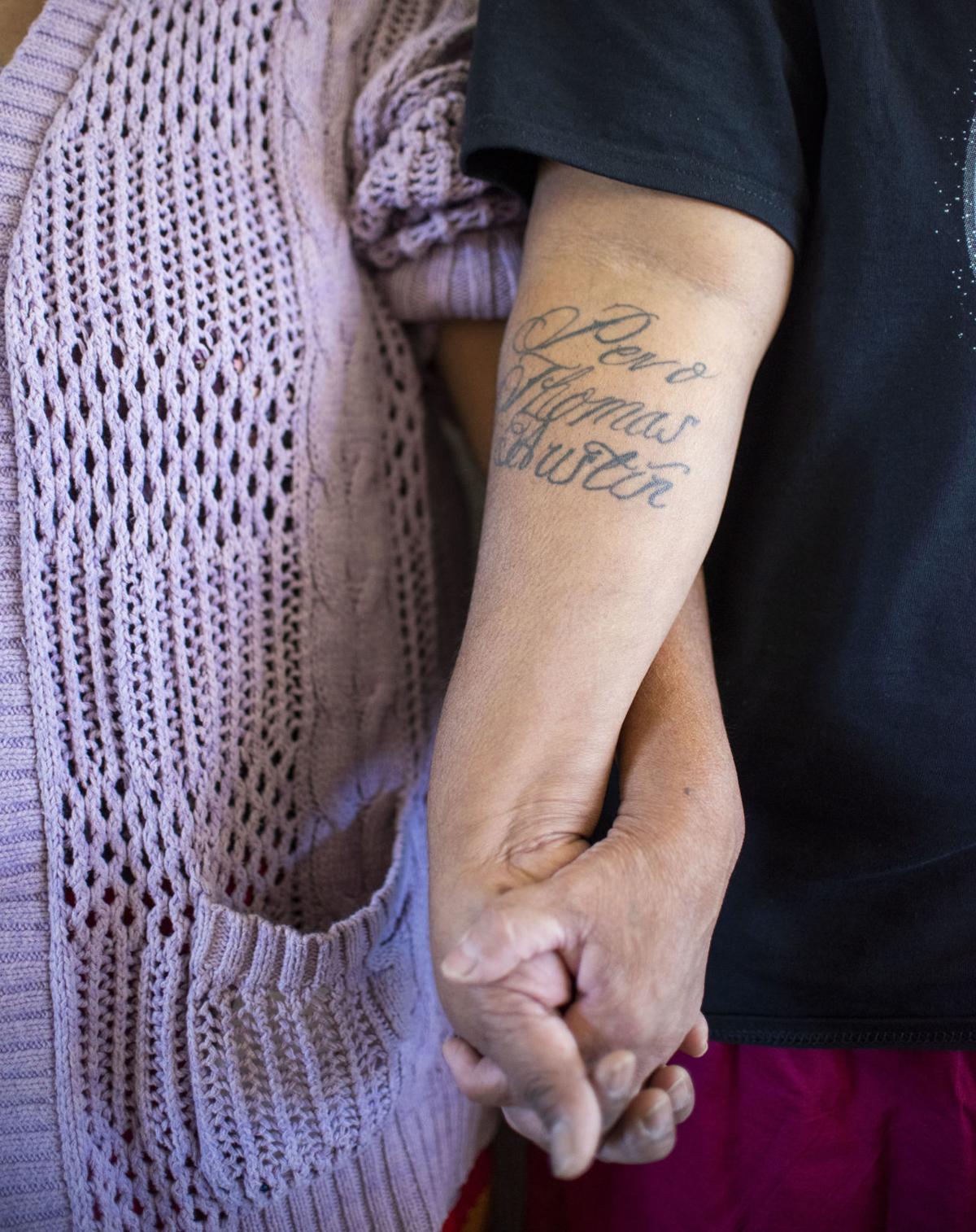 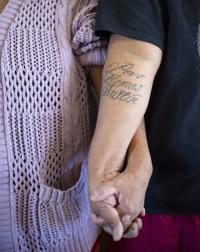 Susan Pevo, mother of Austin Pevo, holds the hand of her sister, Daeda Pevo. Susan Pevo has her sons’ names, Thomas and Austin, tattooed on her right arm. 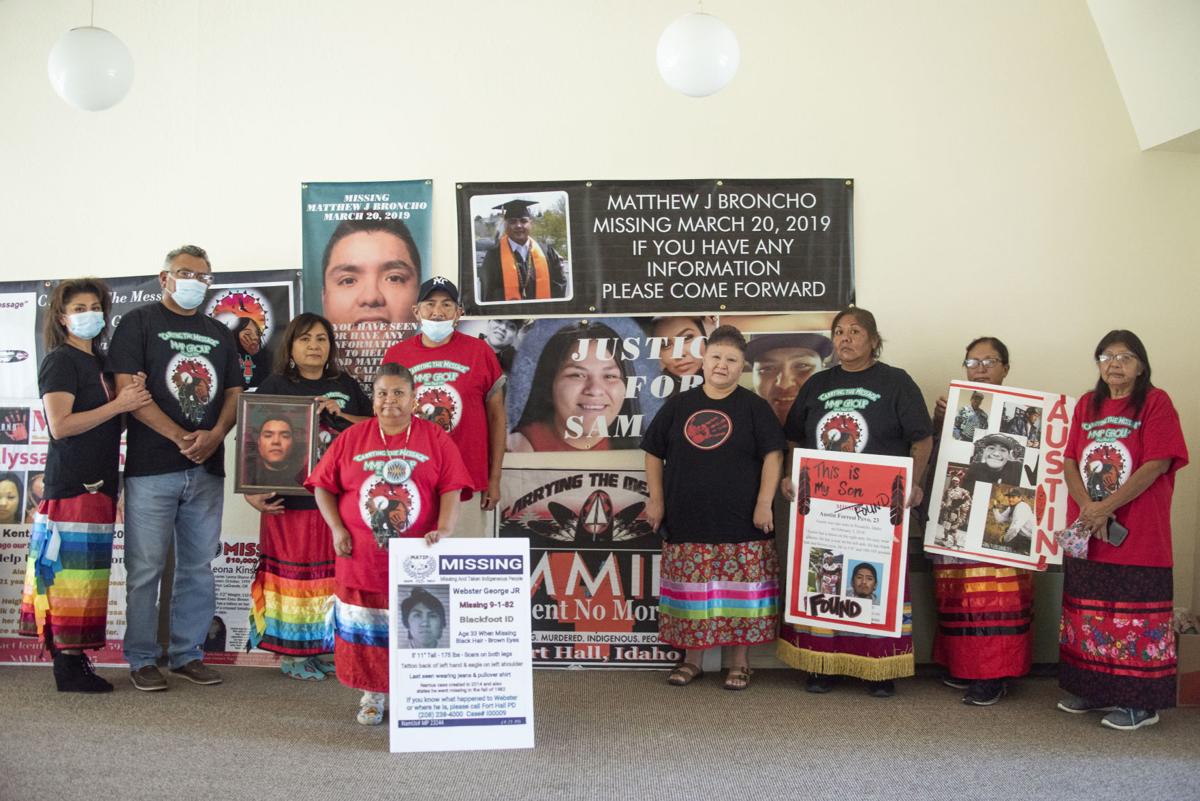 Willeena George, aunt to Samatha and niece to Webster George Jr., poses for a portrait in front of a photo of her niece while holding a missing poster of her uncle.

Daeda Pevo and Susan Pevo, mother of Austin Pevo, hold posters of Austin. His killer was sentenced to 27 years in prison.

Erick Auck Jr., Cynthia Metz, Jimmy and Gretta Broncho, all family members of Matthew Broncho, pose for a portrait while Matthew’s mother, Cynthia, holds a hold of him on Sunday, Oct. 3. Matthew went missing March 20, 2019, but his case has come to a halt despite his family’s continual efforts.

Susan Pevo, mother of Austin Pevo, holds the hand of her sister, Daeda Pevo. Susan Pevo has her sons’ names, Thomas and Austin, tattooed on her right arm.

Austin Pevo was 23 when his mother reported him missing. The pair lived just down the street from each other in a quiet neighborhood on the Fort Hall Reservation, a 20-minute drive from Pocatello, Idaho.

Pevo was a powwow dancer who loved to entertain. During the week he worked odd jobs repairing homes and chopping firewood with his fellow Shoshone-Bannock tribal members, including 27-year-old Justin Beasley.

Two years later, federal investigators determined Beasley stabbed Pevo twice in the chest before taking the young man’s body to an isolated area in Arbon Valley, according to court documents. On Oct. 26, Beasley was sentenced to 27 years in federal prison for second-degree murder.

“Maybe one day he will tell me the reason why he did this to my son, and then I’ll forgive him,” Susan Pevo said. “But right now I cannot forgive him.”

She spoke to the News&Guide in person on the Fort Hall Reservation, surrounded by members of a newly formed Missing and Murdered Indigenous People coalition, created to face tragedy in communion rather than privacy, as had previously been the community’s norm.

“They say, you know, what happens here stays here,” said the group’s organizer, Willeena George. “We have to break that barrier.

“Uncovered secrets keep you sick,” she said. “We can’t heal if we don’t say something. And that’s why we always say ‘Silent no more.’”

Before Pevo disappeared, there was no Missing and Murdered Indigenous People group in Fort Hall. Tribal members felt safe enough to let their children roam the reservation streets without fear that they wouldn’t come home. That’s not to say there wasn’t violence and loss — George lost her uncle, Webster George, without explanation back in 1982 — but individual occurrences didn’t aggregate to a culture of fear.

That is starting to change.

“After this had happened to my son, my cousin started telling her son and everybody else, ‘Be careful what you do, make sure you’re with somebody. Make sure you tell everybody where you’re going.’ Because we don’t know, this could happen to anybody now,” Pevo said.

A report submitted to the Idaho Legislature in September found that a disproportionate percentage of Idaho’s missing persons are identified as Indigenous, as much as 2.1 times their proportion of the population.

Pevo said part of the reason missing person cases go unsolved is that people don’t want to snitch on their relatives.

In speaking with the News&Guide she revealed that one of the people involved in her son’s murder was a family member, a detail she divulged only because, she said, “I don’t know if I still want to keep that person in my family.”

The pervasive silence at Fort Hall further isolates a community that is already separate from mainstream society. Driving down from Idaho Falls, there’s no visible border, but subliminal divisions are there. Reservation residents know they’re seen as gamblers, traditionalists, vulnerable and at times violent. They receive government support yet are often forced to support themselves.

And they are subject to an increasingly documented phenomenon in which division of police and press jurisdictions means family members who come forward with reports are often overlooked or ignored. Several group members felt law enforcement and media outlets used stereotypes to dismiss people and, in doing so, dehumanize them.

“Authorities like to say they committed suicide because of drugs, and that’s not always the case,” one member said, adding that any rebuttal to the popular narrative “falls on deaf ears.”

For them the Gabby Petito case demonstrated the level of attention that’s possible when missing people are valued, rather than blamed for their fate or dismissed as byproducts of oppression. The case also showed that when authorities collaborate across regional and organizational divides, people can be found.

“Reported my sister missing with Fort Hall police they said because she lives in Idaho Falls I need to report it through them & when I call Idaho Falls police department, they said they can’t help because she went missing on the reservation? Like wtf why should it matter where u report a missing person!!!” Sonia LaVatta wrote, adding:

“She left Twila’s house Monday at 9. She last messaged me Monday at 1030. Haven’t heard from her since / She hasn’t returned home / Phone is off. Facebook deleted”

The group was encouraging, writing that LaVatta shouldn’t take no for an answer and should demand to make a report.

“They are in the wrong,” Susan Pevo wrote of the police.

“That’s very true they argue back & forth but they need to take report anyway regardless,” George replied.

Another group member, Shanna Devinney, suggested LaVatta file a nationwide Idaho missing report to be “one step ahead.” She also encouraged her to post a photo of the sister’s car on Facebook.

“I pray creator shows her back home or puts in her mind that she has family who love her and that she is safe,” Devinney wrote.

George said she is still grieving the loss of her other sister, Samantha Bear, whose body was found in a Chubbuck canal on May 15. Family members said the FBI promised to investigate Bear’s death after her autopsy was completed.

Missing and Murdered Indigenous People coalitions — both in Fort Hall and on sister reservations — share knowledge of the reporting process, and provide vital support during an emotionally taxing time, group members told the News&Guide. And that social capital, they say, can mean the difference between finding someone or losing them forever.

As elders, mothers and loved ones shared their stories in turn, the distress in the room became nearly unbearable. George went to procure a box of Kleenex, while Sarah Tendoy squeezed Pevo’s hand.

When discussing the Petito case they were full of questions: How did they know to look for her? What agencies were involved? Did the community rally together? And most importantly, how did they find her?

Many of the questions came from Jimmy Broncho, whose own son Matthew is missing. Matthew grew up in Fort Hall, attended boarding school in California, and graduated from Idaho State University with a degree in political science and minor in economics.

In March 2019, the 34-year-old drove to Snowville, Utah with his dog, a Dachshund named Afa. His mother, Cynthia Metz, was able to track his phone, and when she drove to Snowville she found it sitting in his 2011 Toyota Tundra pickup. Her son and his dog were nowhere to be found.

She searched the small, rural town, talked with shop owners and contacted the police.

“Nobody indicated that they had seen him,” she said.

Family members scoured the area alongside volunteers, cadaver dogs and a drone from the sheriff’s department. After a few days they found Afa rattled but alive. That was the last lead in the case.

The Fort Hall group knows each missing person case is complicated. Metz worries she screwed things up by driving her son’s truck home. LaVatta worried her sister wouldn’t be found because she went missing in a different town. All of them suspect a lack of tips means cases will quickly go cold. They also believe authorities could do more.

“Law enforcement doesn’t really work with us,” George said. “We have to go in front of the Council to get them to do something, but still it’s at a standstill on Matt’s case. Sometimes we don’t know where to turn.”

Missing and Murdered Indigenous People activism has sprung up from that void.

Before there was a formalized group, Pevo had nowhere to turn for answers or support when her son went missing. Then, through collaborative prayers and promotion, she said, “everything started falling into place.”

Tips emerged out of silence. Pevo heard directly from people who knew what happened, and they were able to pressure a witness to comply. The FBI confirmed in court documents that a witness to the murder led them to Austin Pevo’s body.

The Fort Hall families call their group “Carrying the Message,” in hopes that by sharing stories of their lost loved ones, they will receive some fraction of the attention Petito received — attention that will bring answers and closure.

“It’s hard out here to bring that awareness,” George said. “We just keep pushing; that’s all we can do is keep getting it out there.”