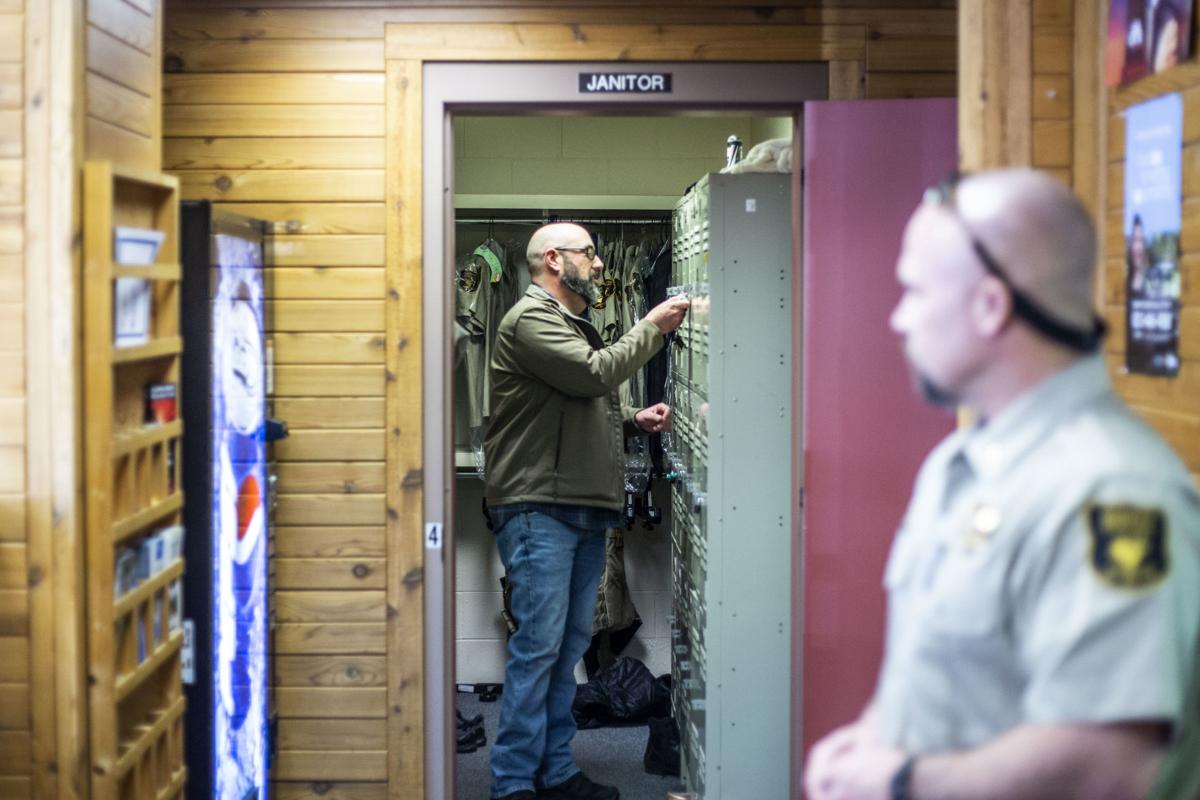 Master Officer Michael Rudd empties his locker ahead of renovations in late January at the Teton County Jail. Up to now all staff — male and female — had to lock themselves in a janitor’s-closet-turned-locker-room to change from their civilian clothes into their uniforms.

Master Officer Michael Rudd empties his locker ahead of renovations in late January at the Teton County Jail. Up to now all staff — male and female — had to lock themselves in a janitor’s-closet-turned-locker-room to change from their civilian clothes into their uniforms.

Teton County Jail is getting a new lobby restroom and new locker rooms for officers — the building’s first renovation in 20 years.

For the last several decades detention officers have been changing in and out of uniforms in the janitor’s closet in the jail lobby.

That arrangement has become trickier in recent years as the Teton County Sheriff’s Office has hired more female jailers.

Out of about 35 employees, 14 women work in the building. That includes detention officers and dispatchers, Sheriff Matt Carr said.

“They have to take turns changing,” Carr said. “Even without the male-female issue there just isn’t much room.”

In the late 1990s detention officers were still wearing Wranglers and T-shirts to work, Carr said, so a locker room wasn’t necessary.

“Our detention officers used to drive in wearing their uniforms,” Carr said. “Now we have uniforms that we maintain and get tailored and dry cleaned.”

Detention officers are trained for policing the jail, and having them keep their uniforms at work helps prevent them from having to act as patrol deputies during their commutes.

“They don’t have the training that authorizes them to utilize those skills outside of the jail,” Carr said. “It’s a liability thing.”

The remodel is underway and will include two locker rooms with private restrooms and showers for staff and a new public restroom in the lobby.

The Board of County Commissioners approved the $180,000 project with ACM Construction Management, a local contractor, winning the bid.

Work started last week and is set to be finished in April.

“We had two large restrooms that weren’t utilized and now we will have a public restroom that’s more obvious and ADA compliant,” Carr said. “The lobby is going to be a more user friendly space.”

Contractors are also bringing that side of the building up to code with a fire sprinkler system.

But because 911 dispatch and information technology equipment is also housed there, Fire Marshal Kathy Clay has suggested a clean agent fire suppression system, an alternative to water.

“We don’t need water on top of electronics,” Clay said.

The clean agent system can suppress fire without ruining equipment, but it can be installed only in unoccupied rooms.

Since dispatch is staffed around the clock, Clay said she’s less worried about a fire spreading there.

“Dispatchers are there 24 hours a day and seven days a week and they have a lot of equipment,” Clay said. “They are under fire watch. Someone is always going to be there so I feel confident we can prevent a fire from spreading. We are going to make sure the doors are fire doors so we limit any spread.”

Although he admits the detention center could use some additional work, Carr said he doesn’t foresee more remodel projects there.

“We are constantly battling the plumbing system, but we can’t upgrade it at this point,” Carr said. “We really have to look at the best use of county funds and whether it is pouring money into the tired, old jail or looking at other options.”

“If we were going to build a jail today we wouldn’t build anything like what we have now,” Cote said. “We expect the jail to function differently than it did in 1986. But we have to live with what we have and when there is an opportunity to do better we will.”