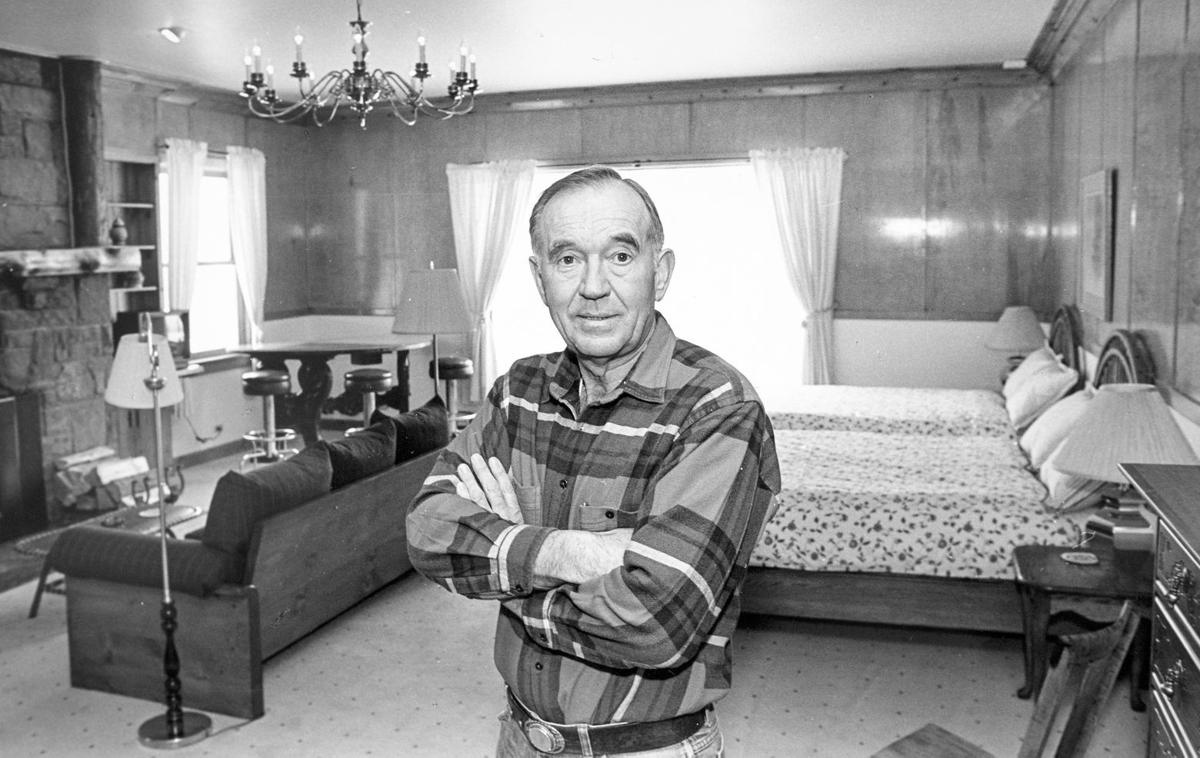 Bernhard Rietmann in a room at the former Heidelberg Inn, which he opened in the 1960s. 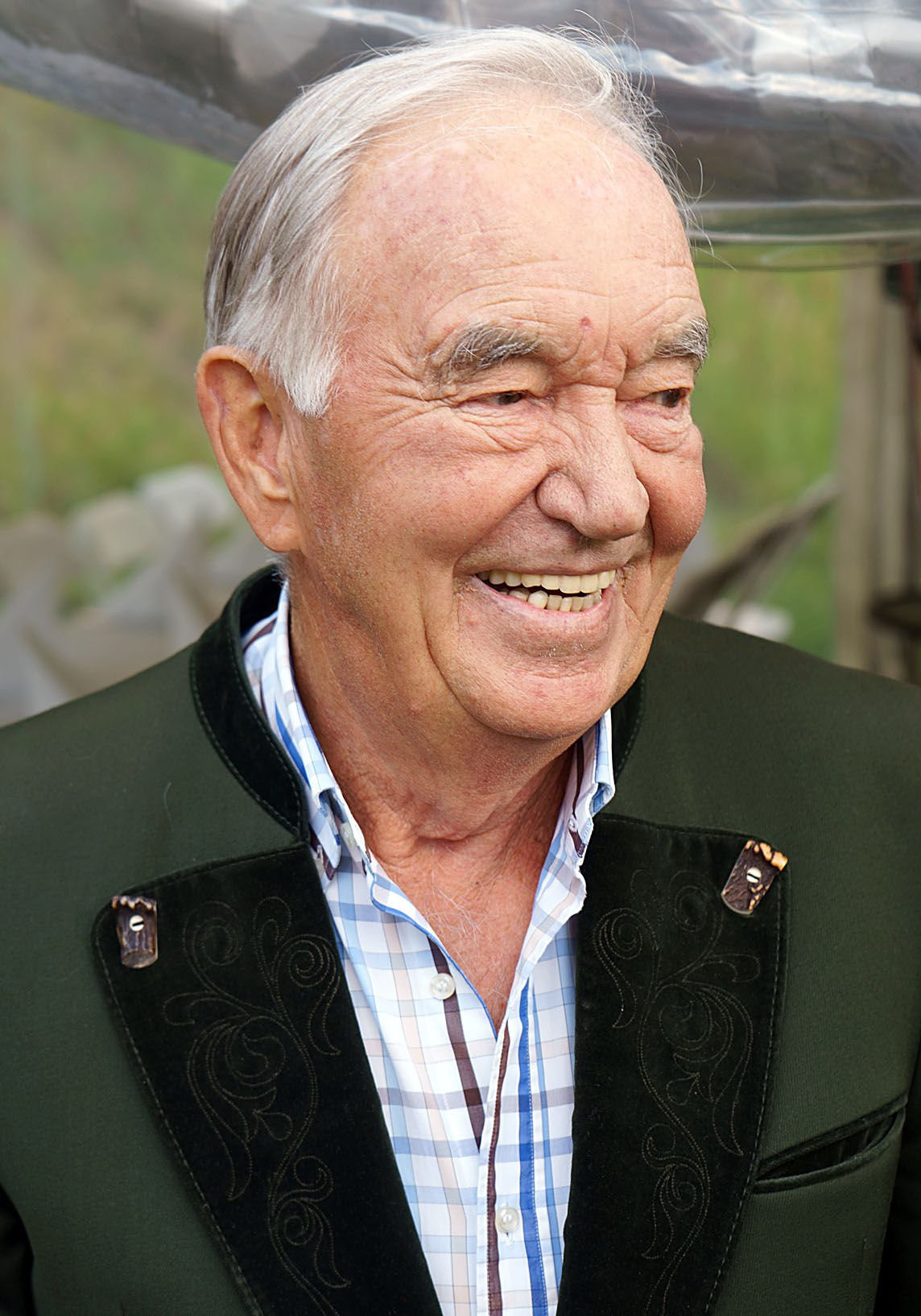 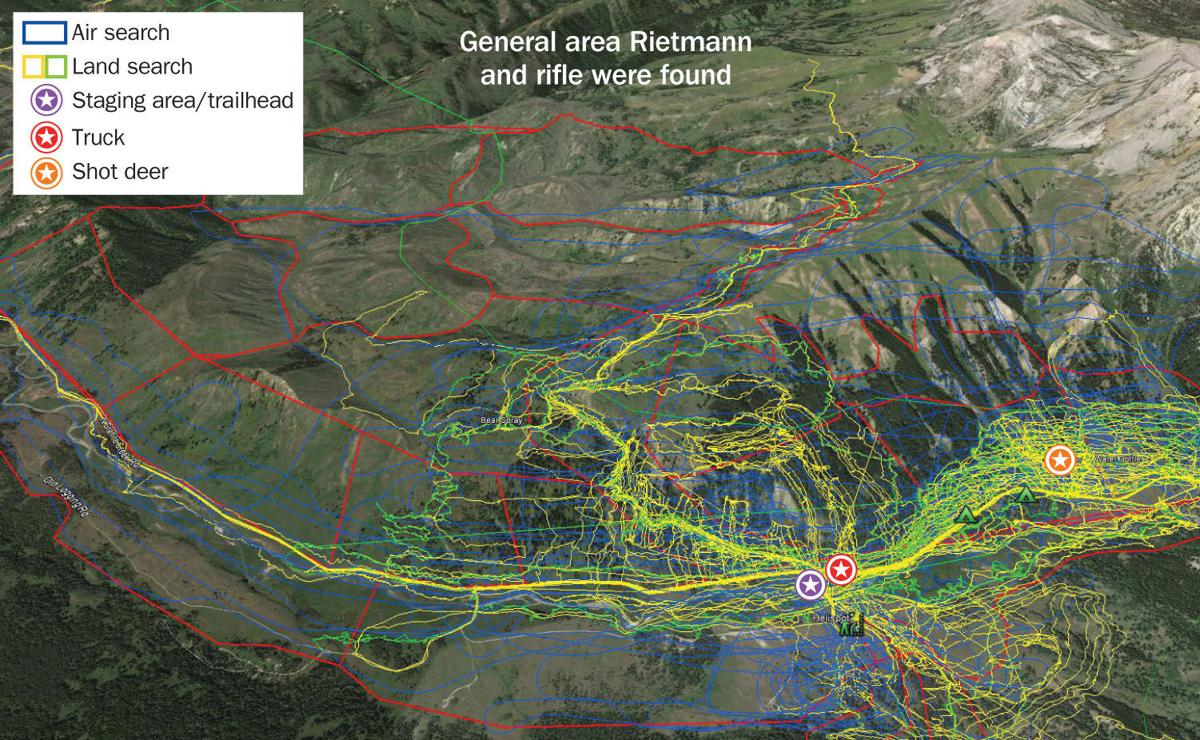 This map shows a roughly 14-square-mile area along the Granite Creek Road near the Highline trailhead. Each line represents the route taken by a separate search team during the six-day hunt for 84-year-old Bernhard Rietmann, who went missing Sept. 23. Though his family believed he was not capable of traveling so far, Rietmann was found Tuesday well outside the search area.

Bernhard Rietmann in a room at the former Heidelberg Inn, which he opened in the 1960s.

This map shows a roughly 14-square-mile area along the Granite Creek Road near the Highline trailhead. Each line represents the route taken by a separate search team during the six-day hunt for 84-year-old Bernhard Rietmann, who went missing Sept. 23. Though his family believed he was not capable of traveling so far, Rietmann was found Tuesday well outside the search area.

The search for an 84-year-old missing hunter ended tragically Tuesday when volunteers found him deceased, apparently after losing his way near Boulder Creek.

Bernhard Rietmann, who owned and operated the Heidelberg Inn in Wilson in the 1960s, appears to have wandered farther than expected on a one-day hunting excursion and found himself unable to get back, authorities said.

After a six-day search, Teton County Search and Rescue located Rietmann’s remains, following a lead from a Green River hunter.

The hunter, who was in the Boulder Creek area Monday, found a rifle abandoned and took it home with him. Once he was out of the woods, he heard of the ongoing search and called the authorities.

When they began looking in the area where the hunter found the rifle, Search and Rescue volunteers found Rietmann’s remains a little before noon.

“It looks like he got where he was under his own power, maybe got disoriented following a deer or something,” Teton County Deputy Coroner Russell Nelson said. “It looks like he tried to hunker down and retain some heat, pulling some grass and bush over him and just never found it in him to get back out.”

Nelson performed a preliminary examination at the scene and determined that evidence indicated Rietmann walked the entire way from the Highline trailhead in the Granite Creek area, where authorities concentrated most of their search last week. Rietmann’s car was found parked there by a family friend who went out looking for him the night of Sept. 23 shortly before reporting him missing.

Teton County Search and Rescue walked up the trail and combed the area calling Rietmann’s name for about four hours that night before packing it in and resuming the search Thursday morning, authorities said.

The next day, going off information from family and friends, the search focused on areas within a mile of Rietmann’s car, concentrating near Granite Creek Road. A little way outside the search radius, volunteers found a deer that had been shot, but not field dressed, leading them to believe the search was on the right track. Rietmann had gone out intending to look for deer, according to his longtime partner.

Subsequent search days had volunteers going over the same area with a metaphorical fine-tooth comb. Search leaders were baffled that a man who shouldn’t have been able to crest the Highline Trail would leave no further trace of where he’d gone.

Little did they know, they were searching in the wrong area, according to the narrative provided by Teton County Sheriff Jim Whalen.

Family members and close friends did not believe Rietmann would have been able to go far from his intended path along the road, Whalen said.

“The information we had been given was that he was not a fast mover, and he wouldn’t go up a steep hill,” he said. “More specifically, he wouldn’t and probably couldn’t go up the Highline Trail very far.”

That statement drove the search for three days. Volunteers from four states went over the ground on foot and on horseback, some teams with search dogs. With government helicopters unavailable, two local men flew their own personal machines in an air search.

With an 84-year-old man missing in the woods, time is always a factor. Rietmann, an experienced hunter who had gone on solo trips in that area before, had been carrying only a sandwich, water bottle and rifle. The pack he normally carried in the backcountry had been left at home, and he had no cold weather gear along with him.

By the time the weekend rolled around, the authorities moved the search up to the top of the Highline Trail, on the off chance he’d made it farther than his family believed was possible.

“I think the mood the entire time was just bafflement,” Whalen said. “All of us were just baffled that we hadn’t found him yet or even any trace of him.”

Death was not unexpected

The only person who had even seen the missing man was an outfitting guide that a community volunteer encountered who thought he “might have seen” him near the shot deer the day he disappeared.

By Monday teams embarked on an intensive search of Granite Creek and other area creeks, along with the Hoback River, believing that it was possible Rietmann had fallen in the river and been carried out of the search area. After searchers had to use a helicopter to haze a bear off the Highline Trail, others began wondering whether Rietmann had met with another animal.

“The survivability factor for Mr. Rietmann is almost zero at this point,” Whalen said Monday afternoon. “Is all hope gone? No. But there’s a point at which we need to be realistic and scale back.”

Then the hunter called with news of the rifle he’d found. As law enforcement worked to confirm whether the rifle belonged to Rietmann, searchers in the field discovered his remains.

There was no evidence that Rietmann had been the victim of a bear or other animal and no evidence of foul play, Nelson said after his preliminary investigation.

Everything the deputy coroner saw at the scene led him to believe that Rietmann had wandered farther into the woods than believed, became lost and tried to keep warm.

While Nelson said he would not know how long Rietmann was alive during the search until the autopsy is complete, it seemed likely that given his age and the conditions at the time, Rietmann died that night. The autopsy should be complete today, he said.

In the meantime members of the Jackson Hole community who had gone out searching prayed for the missing man and his family and awaited updated news, received the news of the Wilsonite’s death with sadness, but little surprise.

Whalen and other searchers had long prepared Rietmann’s family, son Max Rietmann, his partner, Suzanne Ferond, and his “stepchildren,” Laurance and Paul Perry and Frederic Ferond, for the possibility that things would turn out as they did. Whalen publicly announced the low odds of Rietmann’s survival as the search scaled back.

“To all our friends, it is with deepest regret and sorrow that we inform you of the passing of Bernhard Rietmann,” read a statement prepared by the family. “We would like to thank the entire community.”

Rietmann, a member of the community for 50 years, ran the Heidelberg Inn at the base of Teton Pass for around 30 of those years. He still owns the property, which was turned into apartments in the 1990s.

A month before his death, the German-born Rietmann gave an interview to Circling the Square columnist Connie Owen, who was writing about foreign-born Jackson Hole residents at the time. Owen said Tuesday that in the interview he dwelt especially on his pride in his son, who had recently received a doctorate in physics, and on his own 36 years of sobriety after years of trouble with alcoholism.

The family of Bernhard Rietmann invites the community to a memorial service to be held Saturday at Trail Creek Ranch.

As of Tuesday night, the family did not know what time the service would be. Watch the Jackson Hole Daily for updates regarding the details of the service.