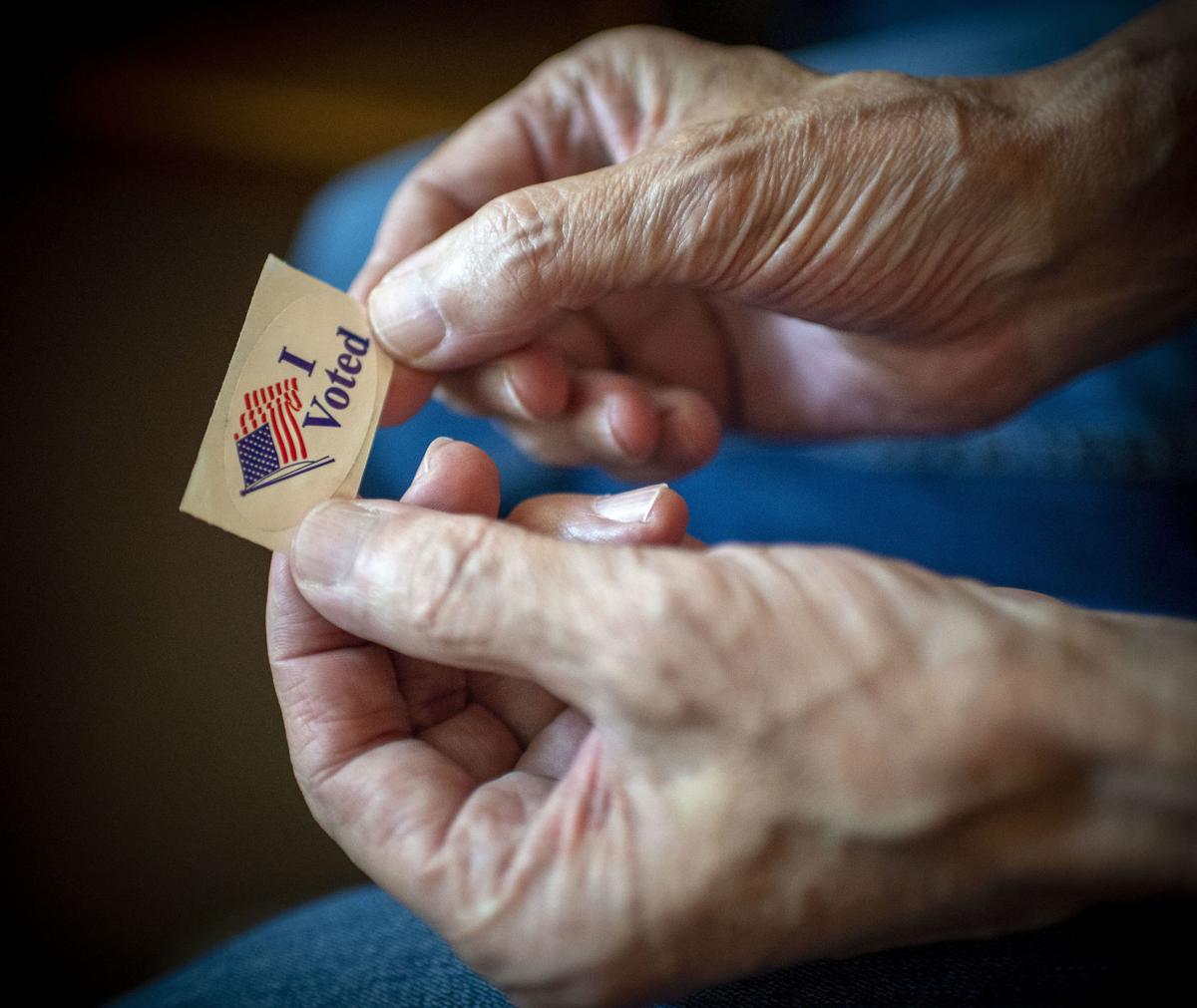 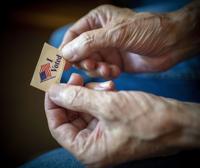 Varley holds the sticker he received upon voting in the 2020 General Election. “That was the first time I’d ever voted,” he said. “I was just trying to be a good American.” 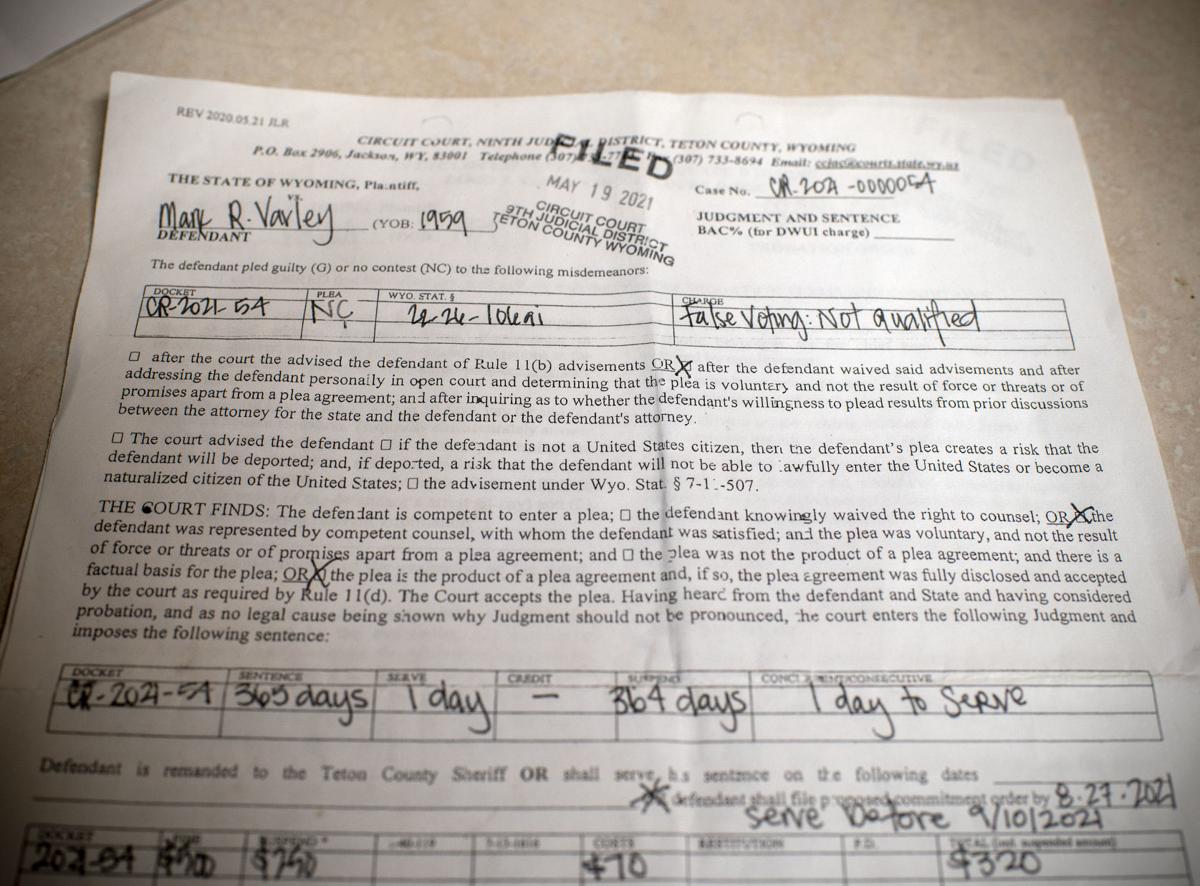 Mark Varley was sentenced to a year in jail, with 364 days suspended, for casting a ballot in November 2020 while not being eligible to vote. He also was ordered $320 in fines and court fees.

Mark Varley voted for the first time in his life in the 2020 election, thinking he was eligible. But his past convictions for nonviolent felonies rendered him ineligible, and in February he received a citation for illegal voting.

Driving down Snow King Avenue on Election Day 2020, Mark Varley decided to cast a vote for the first time.

What he claims he was unaware of at the time was that his vote was against the law.

He then received his registration with no hiccups — the Teton County Clerk’s system wasn’t linked with the database that would have flagged Varley as somebody who couldn’t vote — and he went on his way to the voting booth.

At the booth, Varley voted for Donald Trump, received an “I Voted” sticker and then went home. He felt like an American as he filled out his first ballot and turned it in, he said, proud of the sticker he had received on the way out.

For a few months his life continued unchanged: He plugged backing tracks into his over-the-ear headphones and played Christian music through his electric drum set that faced the pinboard adorned with pictures of his wife, Myra: of the two of them camping, of her in a sundress sitting outside, of four sunbeams framing her gravesite. He spoke to his step-granddaughter, who his wife never got to meet. He took care of his COPD.

In the meantime, the Teton County Clerk’s Office staff merged voting records into the voter database to flag people convicted of felonies who hadn’t had their right to vote reinstated and search for other irregularities, Teton County Clerk Maureen Murphy said. One of the three voters they found was Varley.

That system flagged Varley for voting illegally because he hadn’t had his voting rights restored after being convicted of two nonviolent felonies stemming from unrelated crimes: He was convicted of attempted grand larceny, a crime he was accused of in 2004, and for delivering a controlled substance, which he was accused of in 2007. The other two people the Clerk’s Office flagged also voted despite not having their right to vote restored.

Varley’s felonies put him in a category with thousands of other Wyomingites who cannot vote until they complete their sentences, send an application to the Wyoming Department of Corrections or receive a governor’s pardon, per Wyoming state law. That law, voting experts state, is one of the strictest in the United States.

Christopher Uggen, a University of Minnesota sociology professor and an expert in voter disenfranchisement, said Varley and other people convicted of felonies may unintentionally break Wyoming voting laws that pertain to them because the statutes are convoluted.

“If you and I can sit and study these laws for days or years and still struggle to interpret them, it’s completely understandable that individuals who might be impacted are going to have trouble understanding them as well,” he said.

Varley got out of prison for his latest crime in 2011. By the time he voted in 2020, Varley said, he was mostly unaware of Wyoming’s voting law.

“I didn’t know that I couldn’t vote,” Varley said. “I thought that enough time had gone by.”

What Varley was also unaware of when he voted Nov. 3 was that no amount of time would restore his right to vote. Only a governor’s pardon would, and he hadn’t even started that process to receive a pardon when in November 2020 he voted along with more than 159 million other Americans.

In his research Uggen estimated about 12,517 people are disenfranchised in Wyoming by such laws.

He arrived at that number by first analyzing the proportion of people imprisoned nationwide for violent felonies, nonviolent felonies and repeat felonies. Then he applied those percentages to Wyoming’s prison population. Based on those numbers and Wyoming’s voting laws, he estimated that around 2.9% of voting-age people in Wyoming are barred from voting based on their criminal history. The national average, Uggen said, is about 2.3%.

“I didn’t know that I couldn’t vote. I thought that enough time had gone by.” —Mark Varley, jailed for voting

The Sentencing Project, a nonprofit organization engaged in research and advocacy for criminal justice reform, states there are nearly 6 million people who are permanently disenfranchised.

“Denying the right to vote to an entire class of citizens undermines our democracy and makes our society less inclusive,” Antonio Serrano, the ACLU of Wyoming’s advocacy manager, said in a statement. “That is why we’re advocating that the right to vote should be preserved and should never be taken away from citizens — including those who are currently incarcerated — as punishment.”

Nazgol Ghandnoosh, a senior research analyst at The Sentencing Project, echoed Serrano, and noted that Wyoming’s law is particularly punitive.

“Wyoming is on the pretty extreme end of the spectrum,” she said.

Ghandnoosh also pointed out that requiring a governor’s pardon lowers the likelihood that a disenfranchised person will regain the right to vote.

“The more you put discretion into the hands of the executive branch, the worse the outcome is going to be for people because the governor is going to be very risk averse and not want to be associated with anything that could result in political backlash,” she said.

That process is one of the reasons that advocates for expanded voting rights consider Wyoming to be one of the strictest states in the country.

Unless Varley receives a pardon, he will remain one of those permanently disenfranchised people, which critics say detracts from their ability to reenter society.

One 2011 report by the Florida Clemency Board found that the recidivism rate for all people convicted of felonies in Florida was 33% before 2007, when former Gov. Charlie Crist signed a law that automatically restored the civil rights of nonviolent offenders after they completed their sentences.

In Uggen’s study “Voting and Subsequent Crime and Arrest: Evidence from a Community Sample,” he also noted “consistent differences between voters and nonvoters in rates of subsequent arrest, incarceration, and self-reported criminal behavior.”

While Varley hasn’t reoffended, he said he remains distressed by being subject to what critics contend is one of the strictest voting laws in the country.

On Feb. 1, based on information provided by the county clerk’s office, a deputy from the Teton County Sheriff’s Office showed up at Varley’s door and cited Varley for “false voting.”

Varley was shocked: He figured he wouldn’t have been able to register unless he was able to vote.

“There should be a big red flag that says, ‘This guy’s not eligible to vote. He’s got two felonies.’”

While the county clerk’s office staff was not connected to the database that would have flagged Varley when he voted, County Clerk Murphy said her office is always looking for ways to improve its system.

After Teton County Circuit Court proceedings, Varley received a 365-day sentence, but the county made him serve only one day in jail. Authorities also tacked a fine and community service onto his sentence.

Varley checked into jail Aug. 12 at 8 p.m. and left the following day. The jail was too cold, and he couldn’t stomach the food, he said.

“It was a nightmare,” he recalled. “They were pumping cold air in there, and I had four blankets around me. But I couldn’t come out from underneath my blankets the whole time.”

That daylong sentence pales in comparison to the 2 1/2-year sentence he served at the Wyoming State Penitentiary, but Varley said it was the emotional fallout of knowing he couldn’t vote that affected him the most.

“I just wanted to feel like I did my vote, because I’d never done it,” he said.

To this day, Varley said, that “I Voted” sticker haunts him.

“I just wanted to put the sticker on the wall and throw darts at it,” Varley said. “It made me feel like I wasn’t worthy to vote as an American.”

Article fails to address the question of why felons have their voting rights restricted. Rather than a biased emotional story that seems to advocate for a change of policy. The reader would be better served by a balanced treatment, or at least some clue as to why these laws were enacted in the first place, so that we can make a better judgement regarding what's the best policy moving forward. Voting is a serious business and we shouldn't allow people to break the laws. If the laws are stupid or unjust they should be changed. Let's start with why the laws were enacted in the first place.