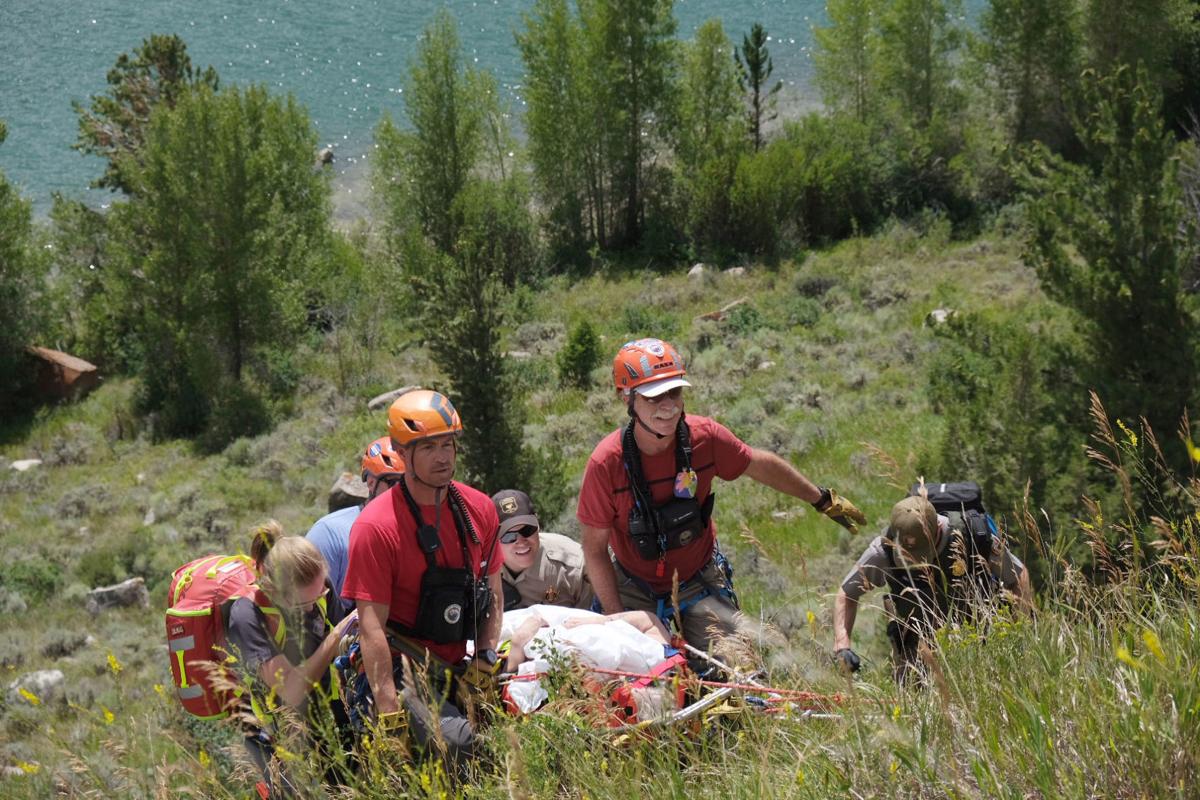 Rescue and law enforcement personnel from multiple agencies carry Donna Joedicke, of West Virginia, to safety Friday after her ATV went off the Gros Ventre Road and tumbled down a steep embankment near Lower Slide Lake. Joedicke suffered only minor injuries in the incident. 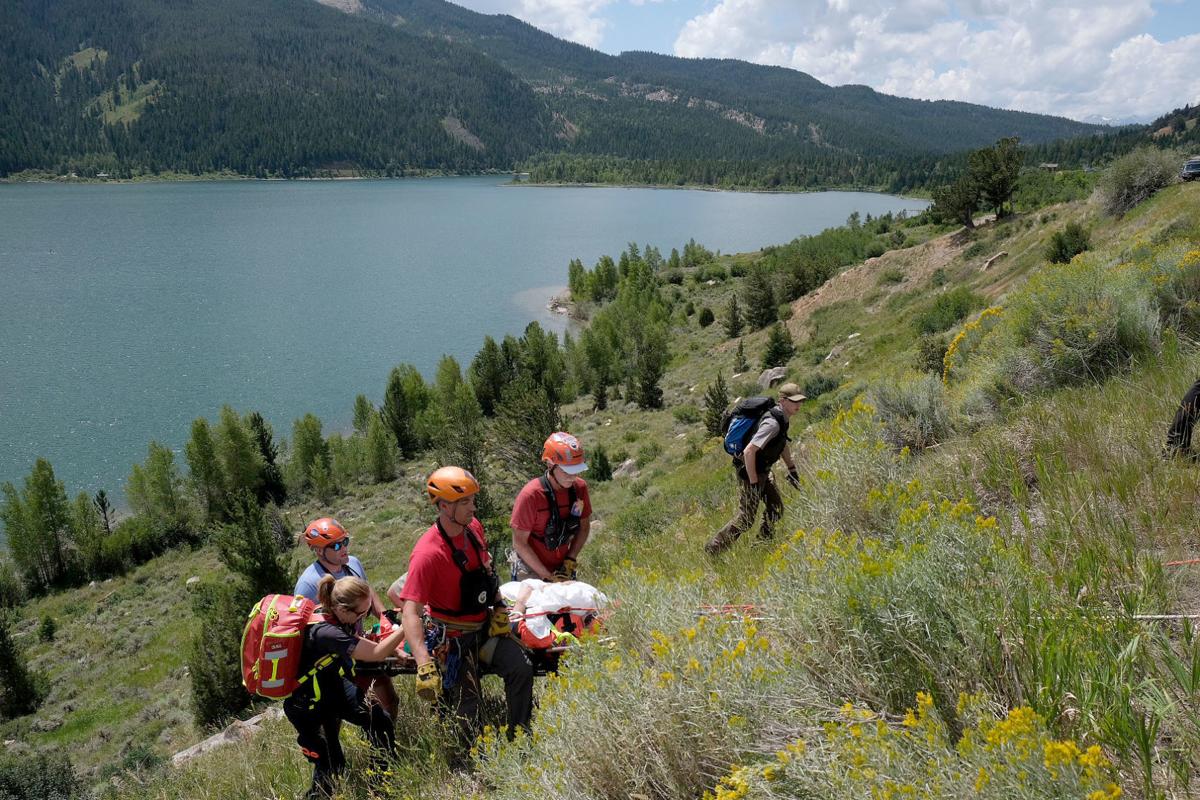 Rescue and law enforcement personnel carry Donna Joedicke, of West Virginia, to safety Friday after her ATV went off the Gros Ventre Road and tumbled down a steep embankment near Lower Slide Lake.

Rescue and law enforcement personnel from multiple agencies carry Donna Joedicke, of West Virginia, to safety Friday after her ATV went off the Gros Ventre Road and tumbled down a steep embankment near Lower Slide Lake. Joedicke suffered only minor injuries in the incident.

Rescue and law enforcement personnel carry Donna Joedicke, of West Virginia, to safety Friday after her ATV went off the Gros Ventre Road and tumbled down a steep embankment near Lower Slide Lake.

A trend of tourists having serious accidents on four-wheelers has emergency responders worried that someone is going to get killed.

“Two of these could have been fatalities,” Teton County Sheriff Matt Carr said.

Scenic Safaris, a company that rents ATVs to the public, said its safety demonstration is thorough and that the three recent rescues were random accidents.

“We give customers a safety briefing on the machine before they even step on them and go through how to operate them,” Scenic Safaris Marketing Manager Jason Smith said. “That’s our standard protocol.”

“If there is something we can help with then we will because we want to avoid these significant crashes,” Carr said.

The Slide Lake accidents were similar, according to Teton County Deputy Shawn Dyson, who arrived first on scene for both crashes just west of Atherton Creek Campground on the Gros Ventre Road.

“They happened 100 feet from each other,” Dyson said.

On Aug. 3 the guide had just unloaded the trailer of four-wheelers at a pullout and the group went about 1,000 feet west on the road before a 17-year-old Sandy, Utah, girl ran her four-wheeler off the side of the road and over the steep cliff just above Lower Slide Lake.

“She thought the roadway jerked her handlebars to the right and felt she wasn’t strong enough to jerk it back straight,” Dyson said. “It was her first time riding a four-wheeler.”

The ATV tumbled down the steep incline and the girl was tossed off before the four-wheeler crashed into a tree, almost plunging into the lake.

“She had minor bumps and bruises,” Dyson said. “Her mom said she was a little sore.”

Less than a week later Donna Joedicke, 71, ran into similar trouble. But her injuries were more serious, Dyson said.

“Her husband said her steering wheel jerked to the right and she tried to hit the brake but hit the accelerator,” Dyson said. “That launched her off the side. She got thrown off.”

Joedicke had to be rescued up and off the steep cliff. The Falling Waters, West Virginia, woman was rushed to St. John’s Medical Center and quickly transferred to Eastern Idaho Regional Medical Center with a head injury.

“That side hill has huge boulders,” Dyson said. “We are extremely lucky we didn’t have fatalities.”

Both the teenager and Joedicke were wearing helmets and were with guides from Scenic Safaris, Dyson said.

On Aug. 4 another Scenic Safaris customer, this time riding without a guide, wrecked her four-wheeler near Slate Creek farther up the Gros Ventre. The 52-year-old woman injured her hip after falling off the ATV and was transported by ambulance.

Scenic Safaris has radios that guides use to alert staff of an accident with injuries.

“We have inReach devices and guides carry them so when incidents happen we have pre-programmed buttons,” Smith said.

Smith said Scenic Safaris has customers with all skill levels, and all get the same safety demonstration whether they’re experienced or not.

“We give it to everyone no matter what,” Smith said. “We try to mitigate any accidents.”

“It’s a very thorough safety briefing,” Smith said. “We talk to them about their safety gear and throttles and steering periphery and proper navigation around boulders. Operator error is what plays into it sometimes.”

Guides are also trained to make sure everyone is comfortable on their ATV once they unload.

Smith said Scenic Safaris has been busier this summer than last, and for the most part, customers come back and return equipment without incident.

“It stinks when something like this happens,” Smith said. “We want everyone to be happy and make sure everyone goes home safely and in one piece.”

ATV's are super dangerous for inexperienced users. They have no concept of how to distribute their weight and carve a turn, nevermind the instincts to release a thumb throttle when they get in trouble.