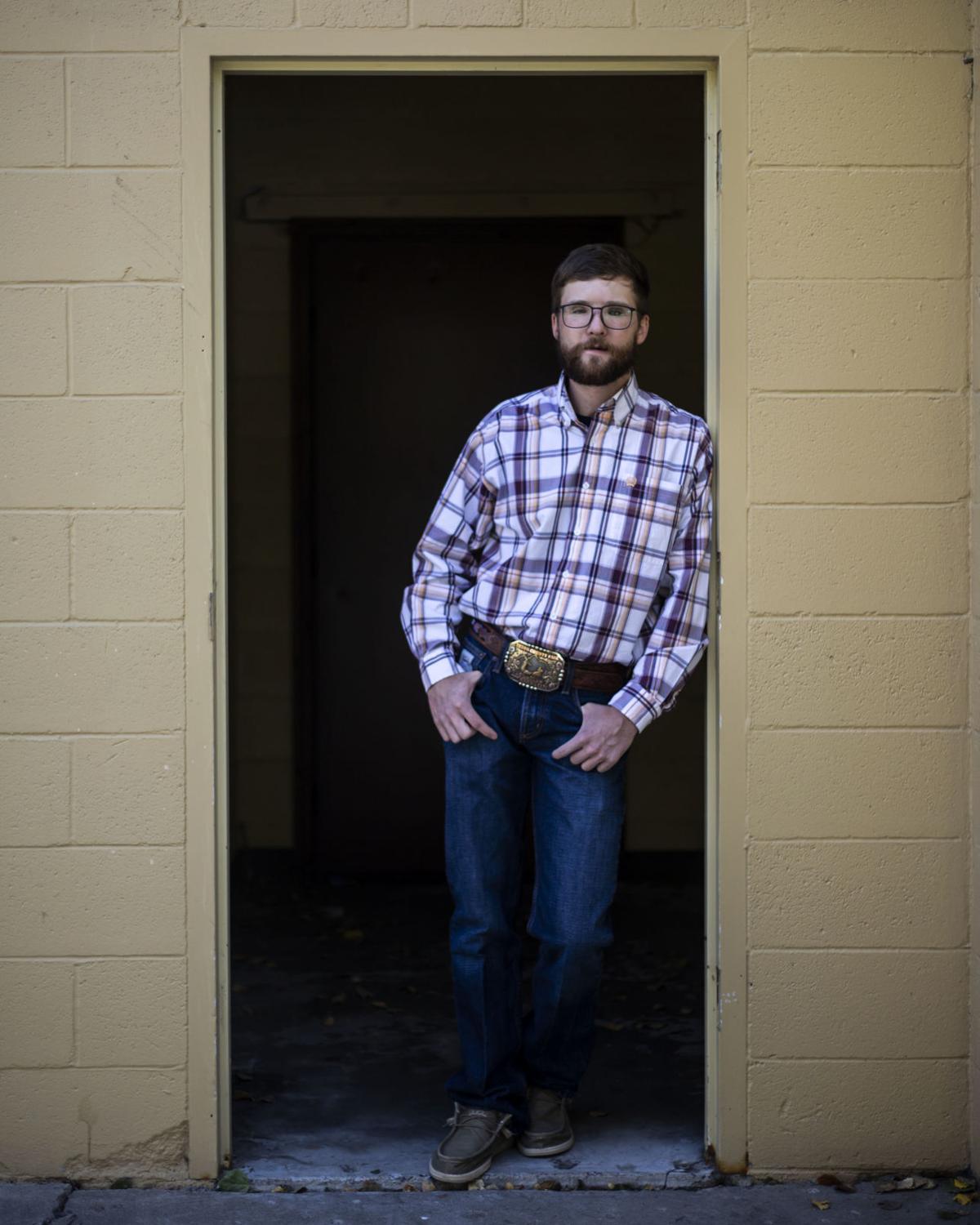 Will Wagner spoke publicly for the first time in early 2019 about mental health and the night he tried to end his life. “I look in the mirror and struggle with what I see, because I don’t see somebody who got shot,” Wagner said. “I see somebody who shot me.” 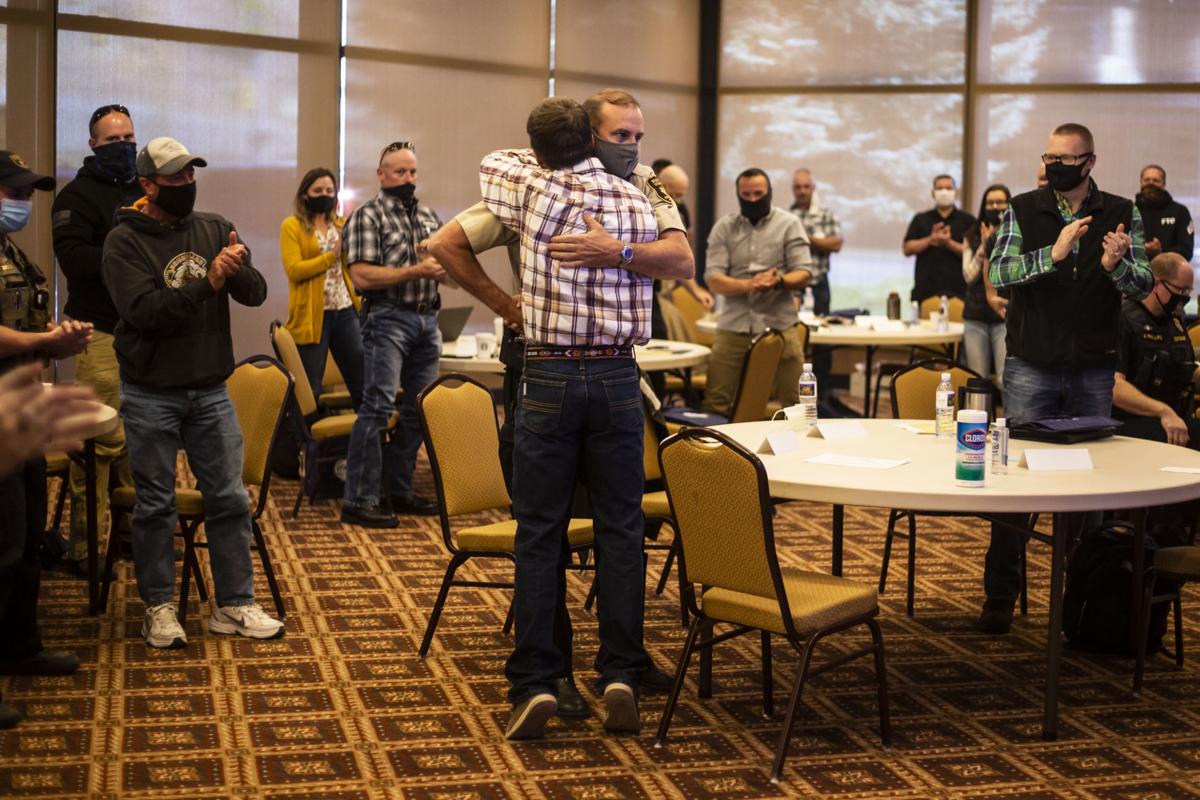 Police officers give Will Wagner a standing ovation as he hugs Sheriff Matt Carr last week during Crisis Intervention Training. Wagner, now 25, shared his story with law enforcement about the night he tried to end his life in order to help them understand how to effectively respond to similar situations. 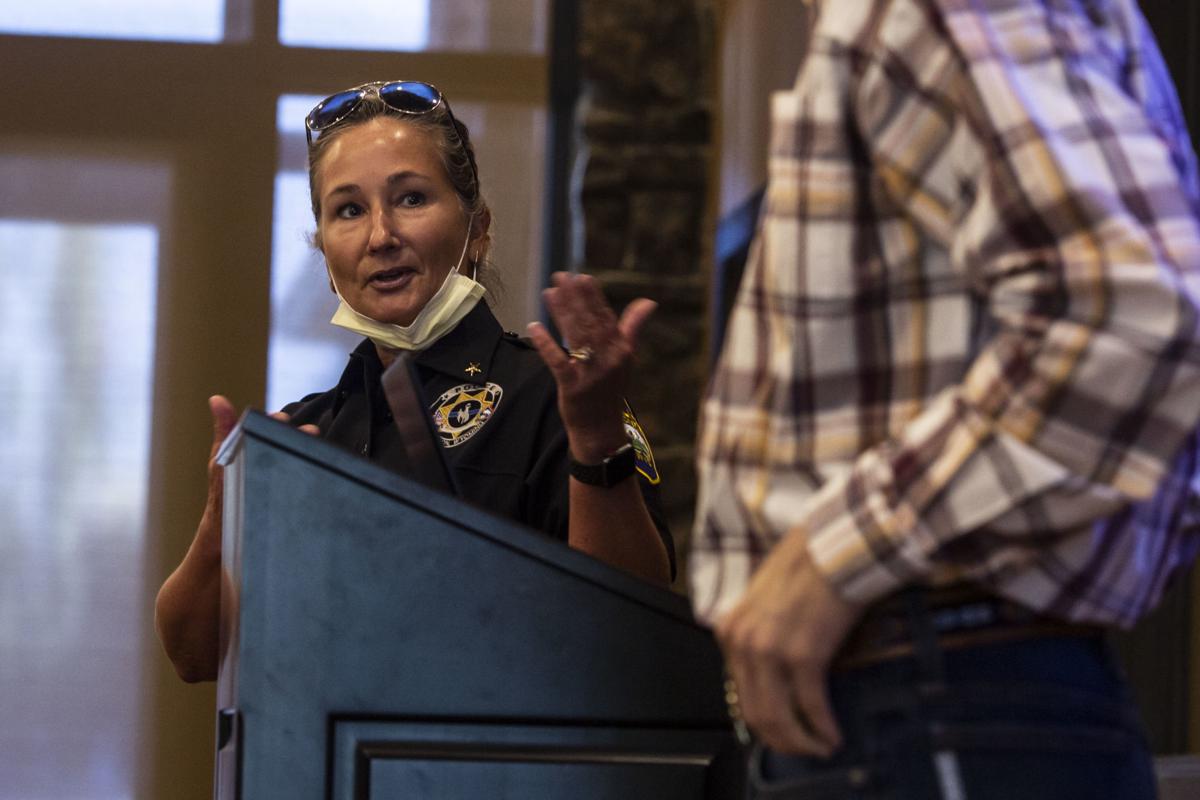 Will Wagner spoke publicly for the first time in early 2019 about mental health and the night he tried to end his life. “I look in the mirror and struggle with what I see, because I don’t see somebody who got shot,” Wagner said. “I see somebody who shot me.”

Police officers give Will Wagner a standing ovation as he hugs Sheriff Matt Carr last week during Crisis Intervention Training. Wagner, now 25, shared his story with law enforcement about the night he tried to end his life in order to help them understand how to effectively respond to similar situations.

But the morning of Oct. 6, Will Wagner stepped in front of a room full of law enforcement officers as part of the Crisis Intervention Training to tell the story of when he tried to kill himself.

On a snowy winter night a couple of years ago, Wagner had been drinking and got into an argument with his girlfriend. Neither the drinking nor the fights were abnormal, he said, but as the night escalated he went into his front yard and tried to kill himself with a .40-caliber pistol.

Until that point, Wagner, who lives in Laramie, wouldn’t have classified himself as depressed or capable of such an action.

“I didn’t think I had an issue, and apparently I really did,” he told the cops.

Wagner became part of the 15% who don’t end up killing themselves. However, like those who survive such attempts, he sustained a host of injuries, including breaking his jaw and both eye sockets.

Because he was speaking to a group of law enforcement officers, Wagner described the police response that night. He was still conscious as his brother tried to stop the bleeding from his head and officers arrived to survey the situation.

His brother had picked up the pistol and was holding it when cops showed up, but instead of reacting to his brother being armed and adding to an already tense situation, they quickly turned to helping Wagner, who was hypothermic and losing blood.

“That was the worst night of his life,” Wagner said of his brother, “and they didn’t make it worse for him.”

Since recovering from his suicide attempt, Wagner has been vocal about his struggles. He was depressed but wouldn’t admit that to himself, he said, and his drinking and relationship problems were worse than he let on.

He has given talks to smaller groups and written about his experience on social media, but the group of cops was the “biggest room I’ve talked to,” he said last week.

“Maybe it’s not what anybody needs in this room, but then they go home and they tell their spouse and their children about it, and maybe it helps them,” Wagner told the News&Guide after his talk.

Beyond simply relaying his story, Wagner implored the police to remember his experience as they left the training and went out into their roles, in which they will inevitably run into people having mental health emergencies. The role of law enforcement writ large in those encounters has been a source of intense national debate, but Wagner reminded them that each situation is with an individual who is in crisis.

Though Wagner’s experience with the police ended that evening, his struggle with depression has continued. Nine out of 10 people who survive a suicide attempt don’t end up dying by suicide, according to the Harvard University T. Chan School of Public Health, and though Wagner said he still deals with mental health challenges, he won’t again try to kill himself.

He described talking about his challenges as “freeing” and said he likes to help others in the same situation. Surviving his suicide attempt also gave him the chance to pursue his passions, like hunting, which he admitted might be a counterintuitive pastime for someone who attempted suicide with a firearm.

While he was in Jackson to speak to the law enforcement officers, he and his mother went hunting together for the first time, an experience he wouldn’t have had if he had died that night in Laramie.

During the hunt he had a moment that reminded him of all the beautiful things he would have missed had he not survived.

“I passed on a little buck ... because it was just cool to get close to that the first time my mom and I ever hunted together,” he said, thinking about the moment as he described it. “I look at things a lot differently now.”