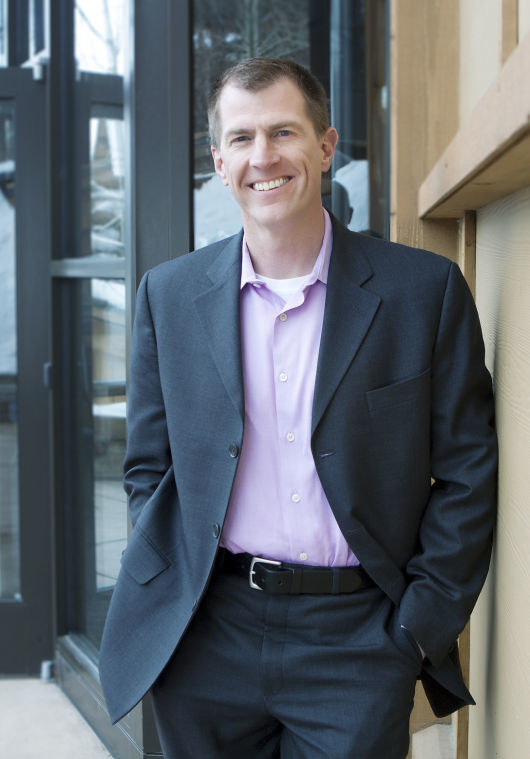 The Grand Teton Music Festival board of directors elected to have Andrew Palmer Todd remain the festival president and CEO, despite receiving a letter from 15 or so former board members calling for his dismissal. “When you’re president and CEO, you make tough decisions,” Todd said in reaction to calls for his departure. “Those decisions aren’t always popular, and sometimes those decisions draw a lot of attention, so you’re always going to have your critics.” 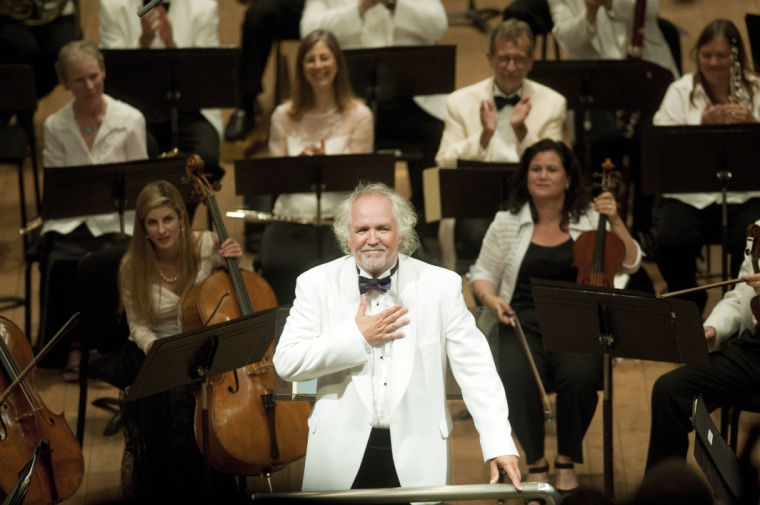 Runnicles wrote a letter to the festival’s executive committee and board of directors expressing his displeasure with the dismissal of musicians Kristen Linfante, Jennifer Ross and Juan de Gomar. After Tuesday’s board meeting the festival said the musicians would be reinstated, Andrew Palmer Todd would remain president and CEO and Runnicles was planning to return for 2020. Runnicles could not be reached for comment.

Donald Runnicles conducts the Grand Teton Music Festival’s orchestra during the festival’s 50th anniversary in 2011. The music director is said to be returning to the festival for the 2020 season after board members chose to reinstate three musicians who had previously been disinvited.

A verdict has been reached. Grand Teton Music Festival’s Board of Directors plans to reinvite the three musicians previously disinvited from the 2020 festival.

“The board has chosen to reinstate the three musicians,” the festival wrote in a release.

That decision, which came Tuesday afternoon, was packaged with another verdict: Andrew Palmer Todd would remain president and CEO of Grand Teton Music Festival.

The board ruled on Todd’s status after receiving a sharply worded letter from Music Director Donald Runnicles and another from about 15 past board members that called for Todd’s dismissal. Former Wyoming Sen. Alan K. Simpson was included in their ranks.

In Runnicles’ letter, delivered to the board Nov. 26, Runnicles noted that a large number of orchestra players were not planning to return for the 2020 season unless Kristen Linfante, Juan de Gomar and Jennifer Ross were reinstated and “those responsible for this action” were held accountable. (See the “Number discrepancy” sidebar for more on the numbers Runnicles cited.)

“A Music Director without an orchestra is an oxymoron,” he said.

“Ladies and Gentlemen,” he wrote, “as it currently stands, without an orchestra in 2020, without strong Board leadership, without an imminent resolution, it is well nigh impossible for me to imagine my role at the helm of the 2020 Grand Teton Music Festival.

“I am acutely aware of never before having written such difficult words.”

Following the meeting, a festival spokesperson asserted that Runnicles, who flew to Jackson Hole from Germany to attend the board meeting, was planning to return for the 2020 season. The music director could not be reached for comment by press time.

A tale of two letters

The music director’s and past board members’ letters built on one another. Both letters can be read online at JHNewsAndGuide.com.

Runnicles’ note painted a picture of managerial dysfunction. Delivered about five days later, the board members’ called for Todd’s departure.

In his letter, Runnicles said the board was notified that he supported the players’ dismissal, though he had made his “full-throated” opposition clear to Todd and board Chairwoman Christine Hartley. Runnicles also accused the president and CEO of seeking support for his “dismissal” among the board and orchestra.

The former board members’ letter, by contrast, called for Todd’s dismissal, alleging that he had “off-putting relations with the musicians, the Music Director and many friends of the Festival.”

“The atmosphere is so toxic, mediation and other third-party interventions would be useless,” the former board members wrote. “You have more than sufficient grounds for dismissal.”

Before the board meeting Tuesday, Martin Andersen spoke on behalf of the Grand Teton Music Festival Players’ Committee, which represents orchestra musicians. He said the group’s position was in line with the former directors’.

“We fully support their assertion that there needs to be a change in leadership on the staff, while fully respecting it is the board’s decision to make,” Andersen said.

Peter Benoliel, a signatory on the letter and one of the festival’s lifetime directors, repeated the letter’s sentiment in an interview before the board’s decision was reached.

“I see no viable way for Andrew to continue in that position,” he said, noting that he felt Todd did have “a very good management personality” in matters “not related to personnel.”

According to the festival’s self-reported data on GuideStar, an organization that aggregates nonprofit data, the organization’s fundraising and audience attendance have increased each year since 2015. Todd was the festival’s president and CEO for each of those years.

Reached after the board meeting, Todd said he believed his relationship with the music director could continue, without commenting on specifics.

“We’re both professionals,” Todd said. “It’s possible to have disagreements — and have serious ones — and continue to have a productive professional relationship.”

He also brushed off calls for his departure.

“When you’re president and CEO, you make tough decisions. Those decisions aren’t always popular, and sometimes those decisions draw a lot of attention, so you’re always going to have your critics,” Todd said, “but I trust that this board of directors knows what track record we have together and they evaluate me every year. You really can’t just get caught up in the noise.”

Speaking for himself, Benoliel said he was “not satisfied” with the board’s decision. Andersen could not be contacted for comment.

A request by the News&Guide to speak with the board about the deliberation was denied on account of its members’ post-meeting exhaustion.

Todd said the festival’s team was working on a plan to reach out to the Players’ Committee, as well as Linfante, de Gomar and Ross.

He also said no organizational changes were being considered.

Other than that, Todd declined to comment on next steps, though he said he and Runnicles were working together to communicate the board’s decision to festival musicians.

“We both have the same goals in mind and I’m confident we’ll get there,” Todd said.

Roger Oyster, a trombonist who has played with the festival for 30 years, said in a text that he was “glad” Linfante, de Gomar and Ross would be reinstated.

“That was the right thing to do,” he said. “But the fact that it happened at all is a sign that the precious and unique culture that made the [Grand Teton Music Festival] the place it is has been severely damaged.

“Healing that damage is the larger, more difficult and more important task ahead.”

In Runnicles’ letter, he claimed 236 musicians had expressed their intent to not return to the festival for 2020 unless the musicians were reinstated and accountability pursued.

That number is at odds with the Players’ Committee, which said 239 musicians had signed the petition calling for the musicians' reinstatement. That group said “approximately 100” musicians had sent letters to festival management detailing their intent to stay away from the festival.

Todd, for his part, said he received about 80 letters. He declined to say how many expressed that sentiment, but acknowledged that it was common. 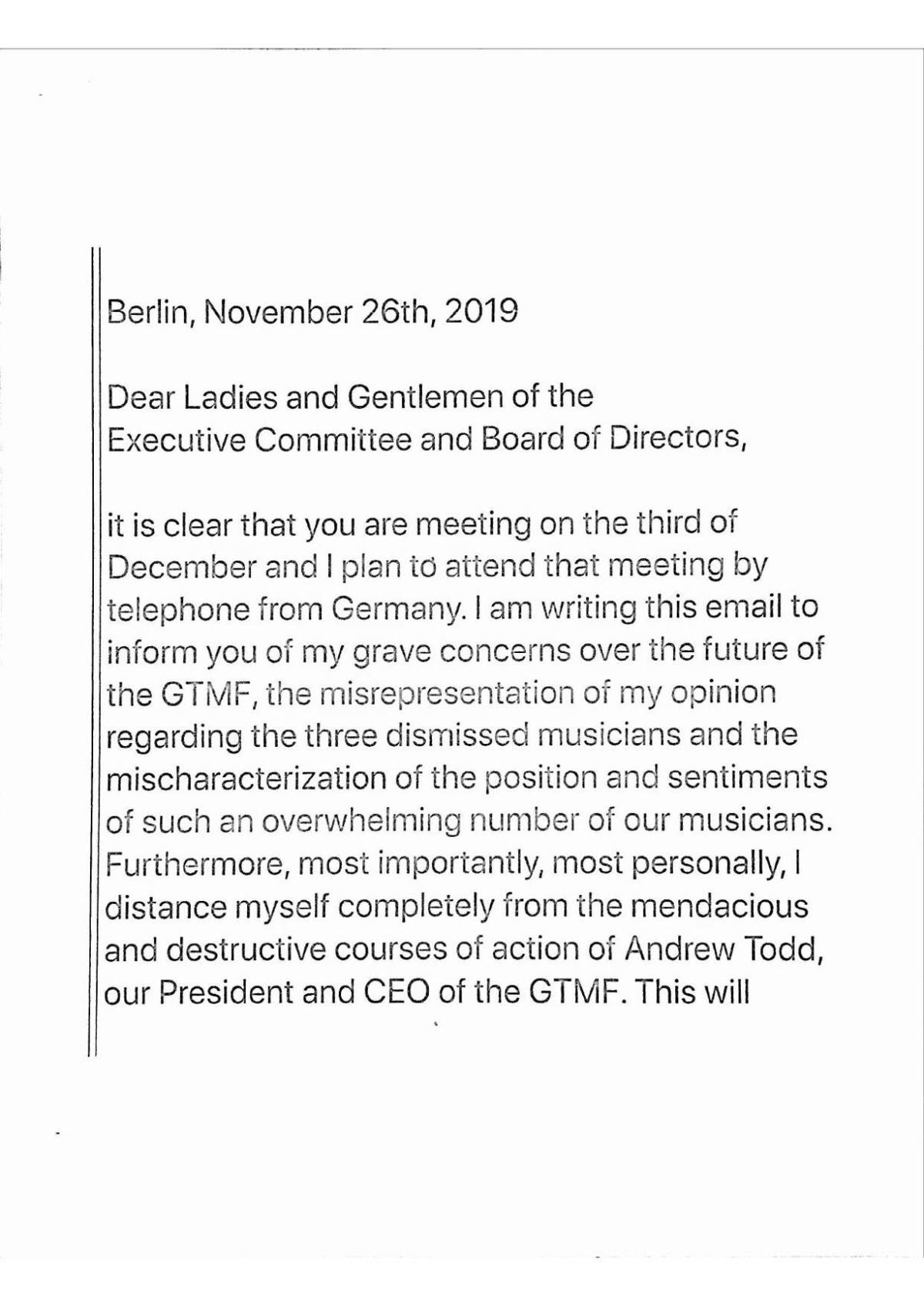 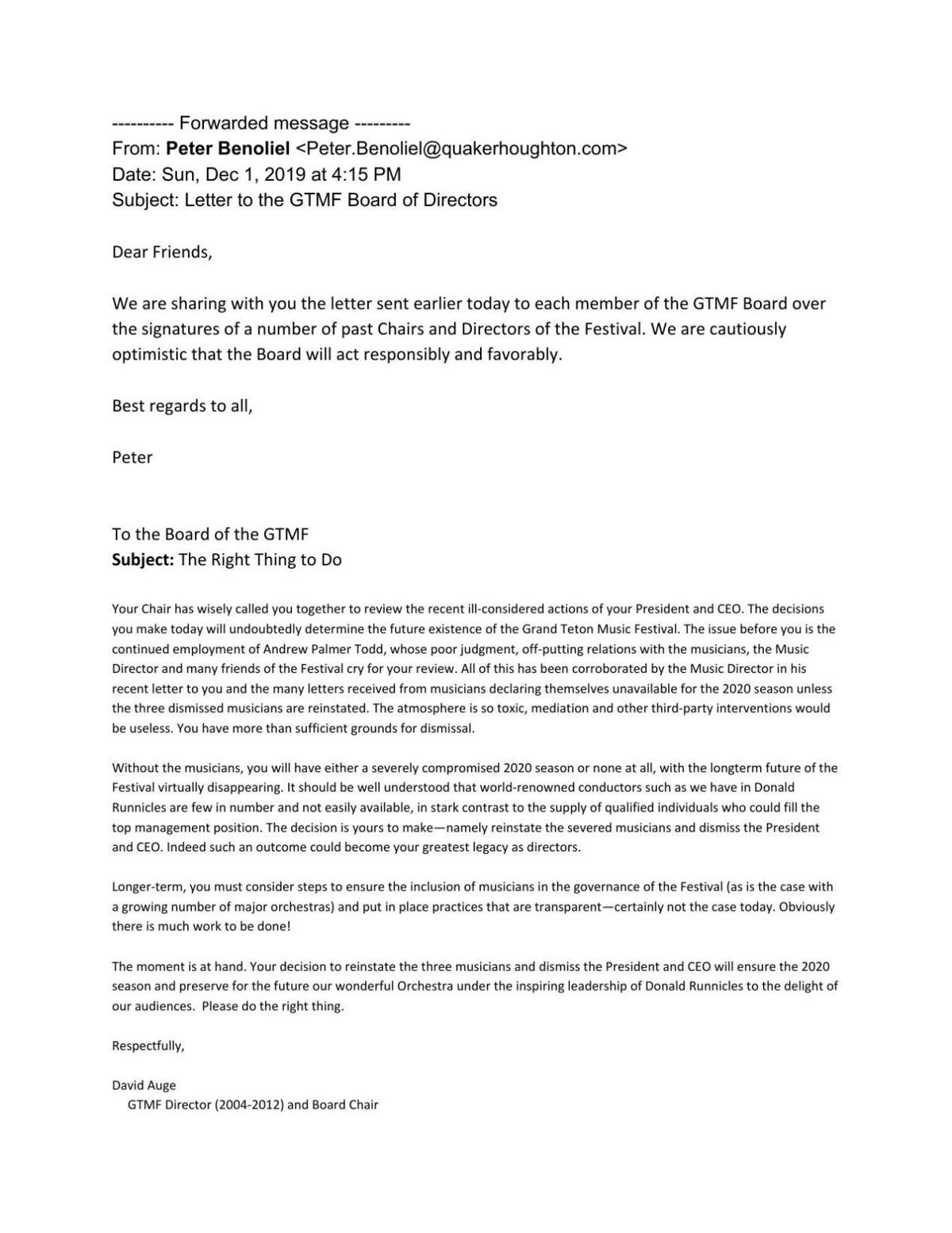