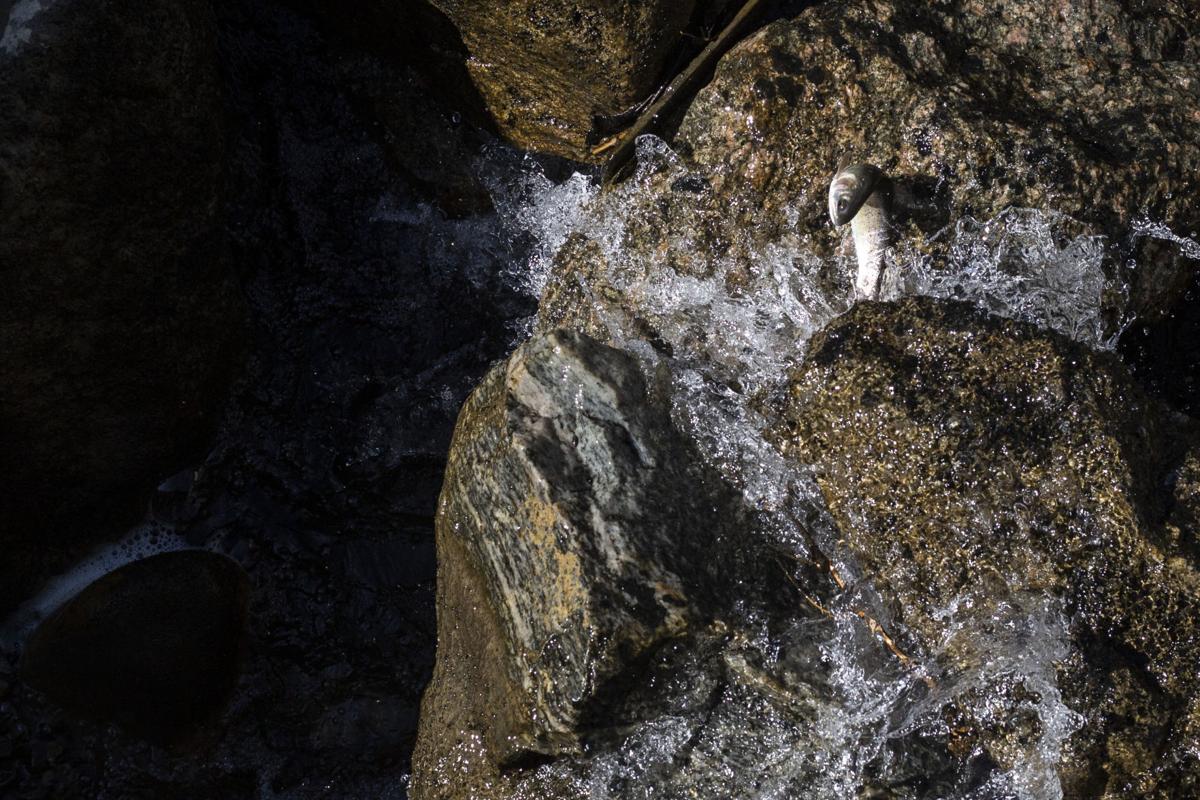 A Snake River fine-spotted cutthroat trout tries to swim upstream near the head of a concrete splitter box, where water diverted from Spread Creek heads north and west to irrigate ranches and the Elk Ranch hayfields. A forthcoming fish screen at the diversion’s headgate will negate the need for future fish salvage operations from the creek’s diversion ditches. 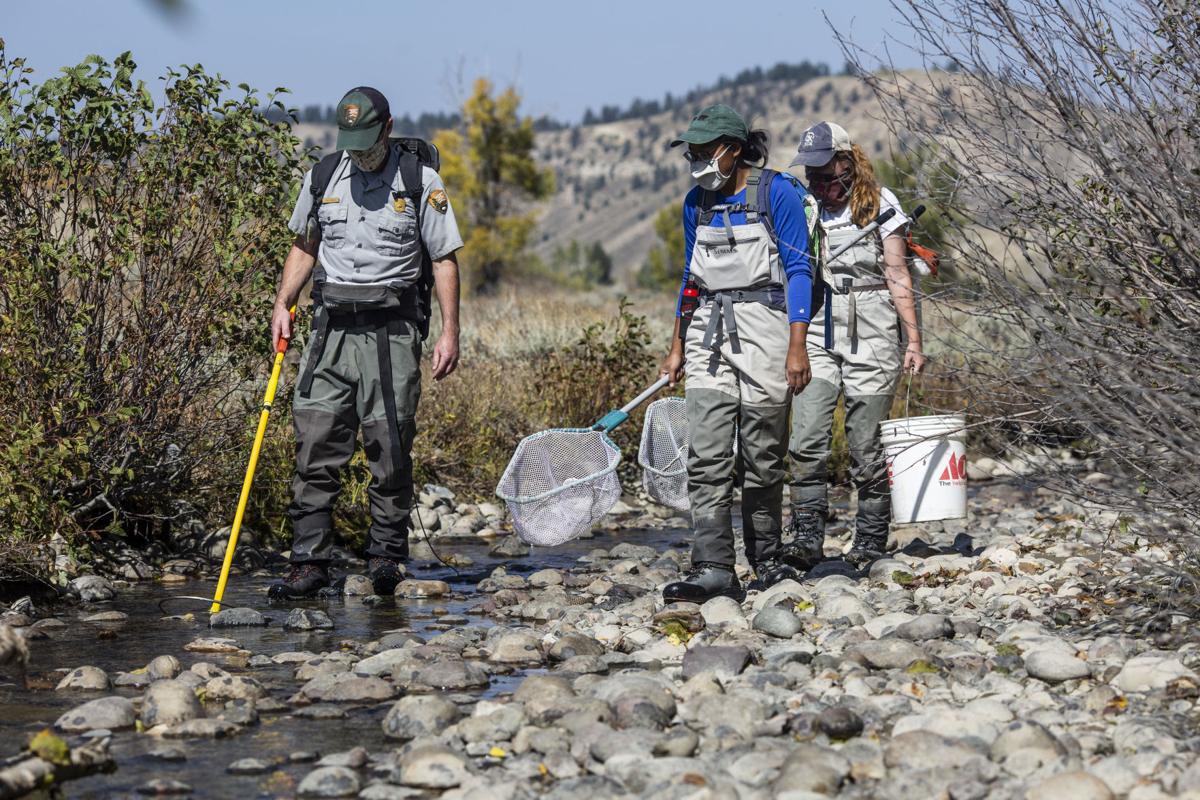 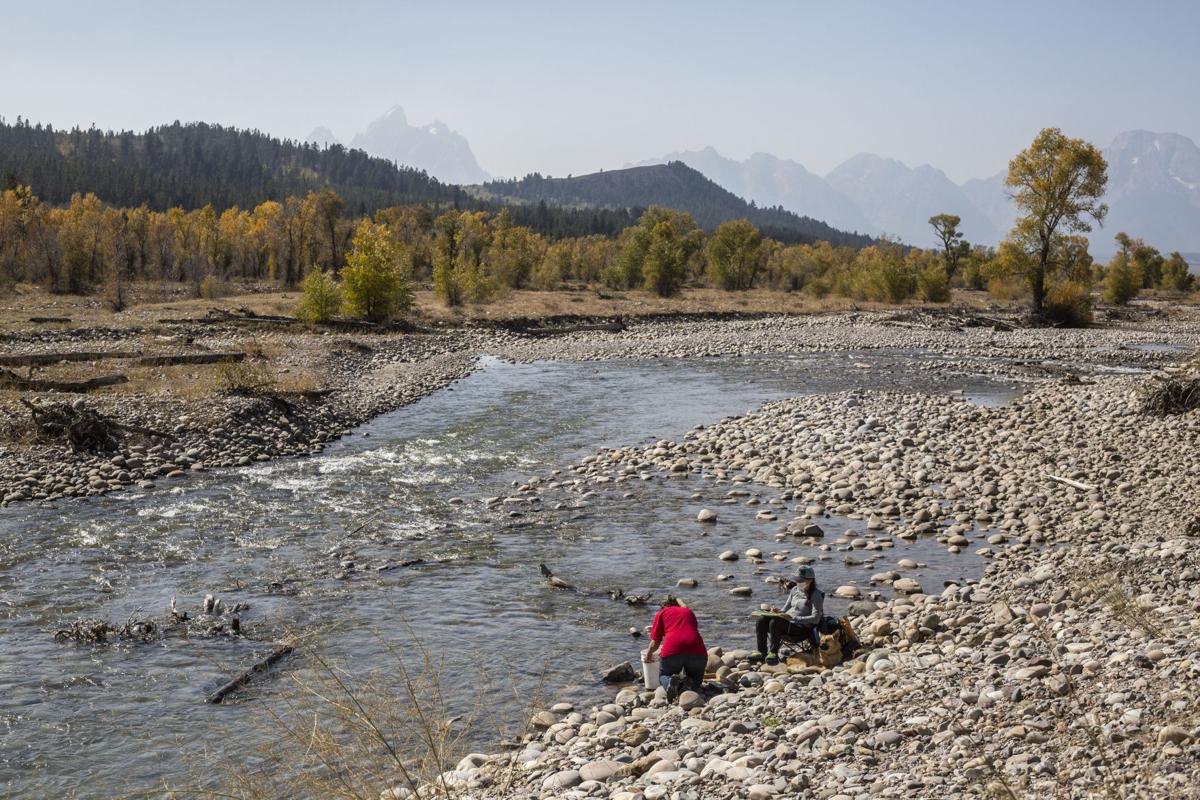 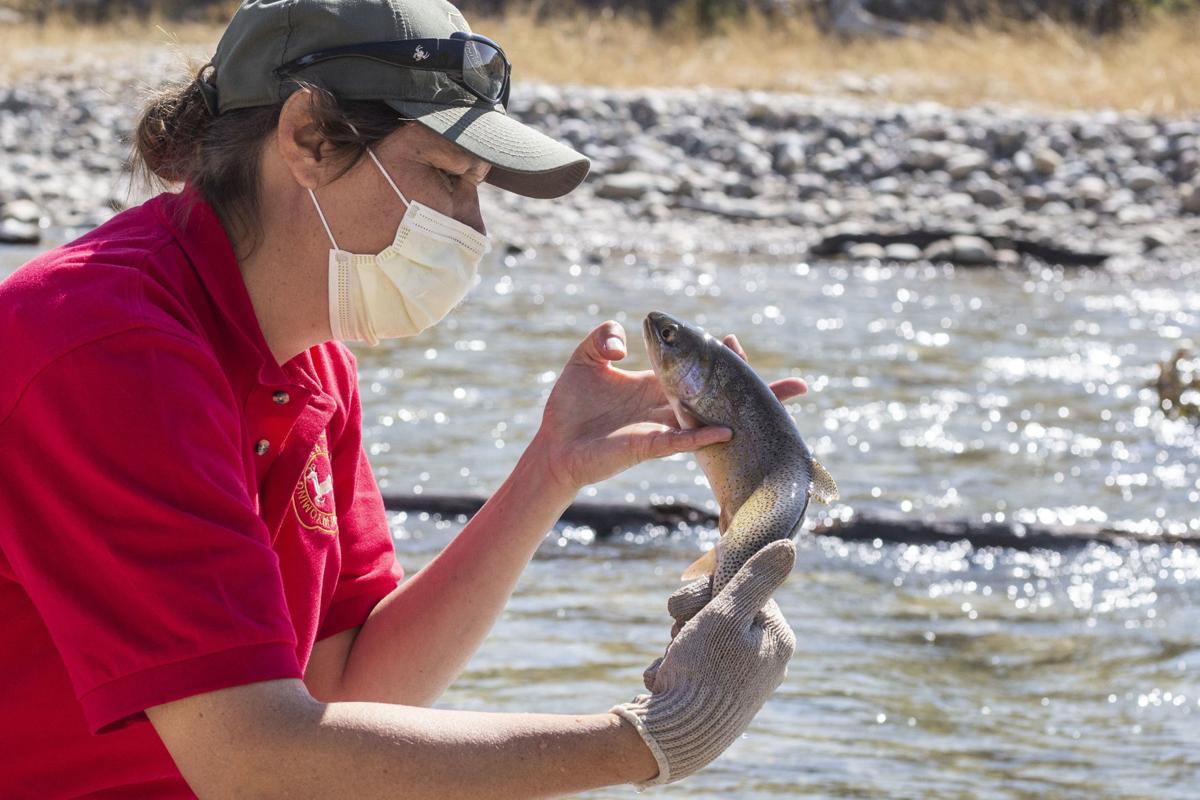 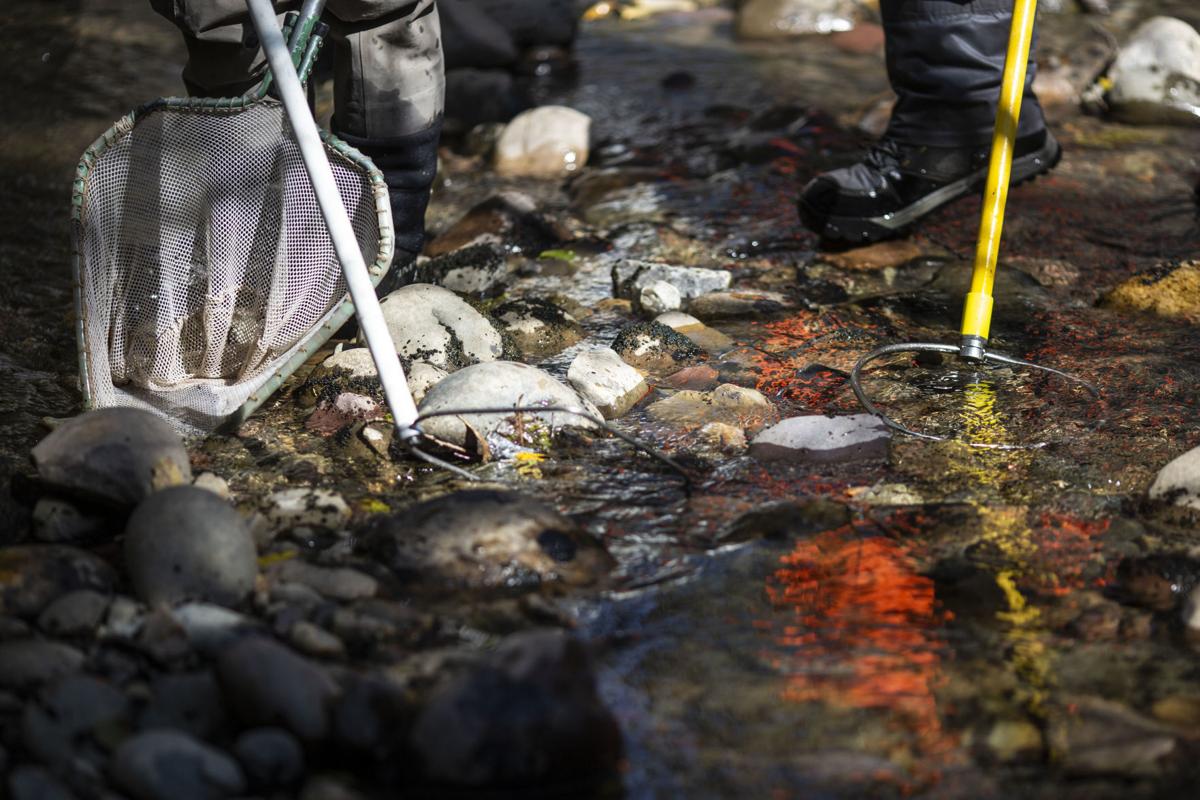 Anodes carrying an electric current that stuns fish and nets are the tools used to salvage fish from the small diversion streams that branch off of Spread Creek. Any found fish are collected in five-gallon buckets and returned to the creek’s main channel. 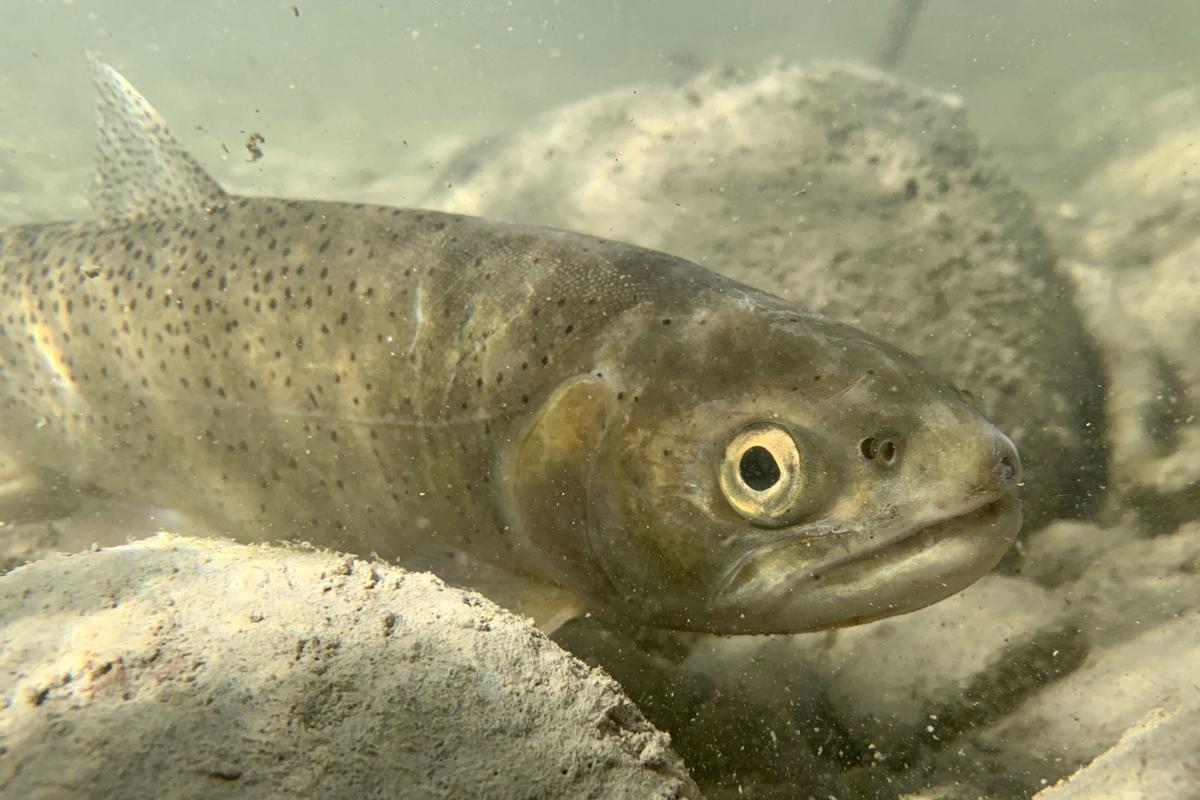 A 14-inch Snake River fine-spotted cutthroat trout recovers after an electroshock and time spent in a five-gallon bucket Monday, having just been removed from a diversion ditch and returned to Spread Creek.

Trout Unlimited’s Leslie Steen and Wyoming Game and Fish Department’s Diana Miller check in on a crew salvaging fish Monday as they near the splitter box that diverts Spread Creek into north and south irrigation ditches. The ditches are closed water systems, making them a death sentence for fish that are sucked into them.

The Wyoming Game and Fish Department fisheries technician was standing in Spread Creek’s water, but not the stream itself. Instead his wader boots were planted in a concrete sediment trap right where water enters an irrigation system, bound for the cattle pasture at Elk Ranch Flats and the Pinto and Moosehead ranches.

Cutthroat — or any fish — ideally wouldn’t be in this structure or any of the ephemeral ditches downstream because it’s a death sentence. But until they were shocked, stunned and carried away in a 5-gallon pail on Monday, there they were: entrained in the diversion by the hundreds.

The writhing trapped trout enthralling the onlookers had Bryan’s full attention. After cutting the electricity he got down on his hands and knees, reaching into the crevices between rocks for one trout tail after the next.

“They just keep coming,” Bryan said. “It’s like pulling catfish out of here.”

Trout Unlimited staffer Leslie Steen and Game and Fish fisheries biologist Diana Miller weren’t surprised that the high-voltage action was most active nearest the diversion. They’ve been participating in the fish salvage, which has become an annual event, for years.

The historic diversion system feeding out of lower Spread Creek is deadly for fish because it doesn’t go anywhere. The terminus is little-known Elk Ranch Reservoir, an impounded nearly 80-year-old body of water that’s tucked into the base of Uhl Hill. It’s shallow enough that in some years it goes completely dry.

Cutthroat and native species like mottled sculpin have likely been trapped in this man-made system since it was created, but for decades they would have just succumbed to the elements in unsuitable habitat. Fisheries managers first started addressing the problem after the Spread Creek Dam came down in 2010, reconnecting 50-plus miles of tributary to the Snake River. An irrigator around that time approached Grand Teton National Park fisheries biologist Chad Whaley, urging him to take a look at fish that were being caught up in the system. He did — and fish were everywhere but were especially concentrated near the headgate.

“We pulled a few hundred fish just out of the [silt] boxes,” Whaley said during a break from shocking the ditch. “Me and my tech climbed down in there. We’d pull out two or three at a time.”

“It was kind of significant,” he said.

Fast forward eight years, and the salvage that started with Whaley, a colleague and a couple of nets is much more organized and systematic.

Game and Fish dedicates some of its staff time to the effort, and Trout Unlimited pulls together volunteers to help out. On Monday two crews spent most of the day shocking and netting nearly three miles of ditch feeding from the headgate to the reservoir. They saved 291 fish in the process: 109 measurable cutthroats, 124 young-of-the-year cutthroats, 26 longnose dace, 16 mottled and Pauite sculpins and 16 mountain suckers.

“We try to do the best we can,” Whaley said. “You can’t get all the fish, but hopefully we get a large percentage of the fish that ended up in the ditch and get them back into Spread Creek.”

Around 1:30 p.m., Whaley’s park crew netted their first longnose dace of the day, a minnow they found taking shelter in a thicket of alders. The 3-inch fish, cradled in the biologist’s hand, had black spots uncharacteristic of the species.

“He’s got little parasites,” Whaley said. “I’m not sure what species — I’m not a pathologist.”

Most of the fish salvaged Monday were cutthroats, the Snake River watershed’s only native trout. Ranging in size from months-old fry to a 14.7-incher, each was shocked, netted, bucketed, logged by Steen and then released back into Spread Creek just downstream of the diversion. The entire process proved to be an all-day affair.

But soon such an operation won’t be needed. Trout Unlimited has been cobbling together funds for a permanent solution — a fish screen, which is a tried-and-true tool to prevent fish entrainment. The device was ideally going to go in this year, but COVID-19 caused some complications.

“The screen will let water drop down and into the ditch,” Steen said. “But the fish will go across the surface of it, and into a bypass pipe that goes into Spread Creek. It will negate the need for all of this.”