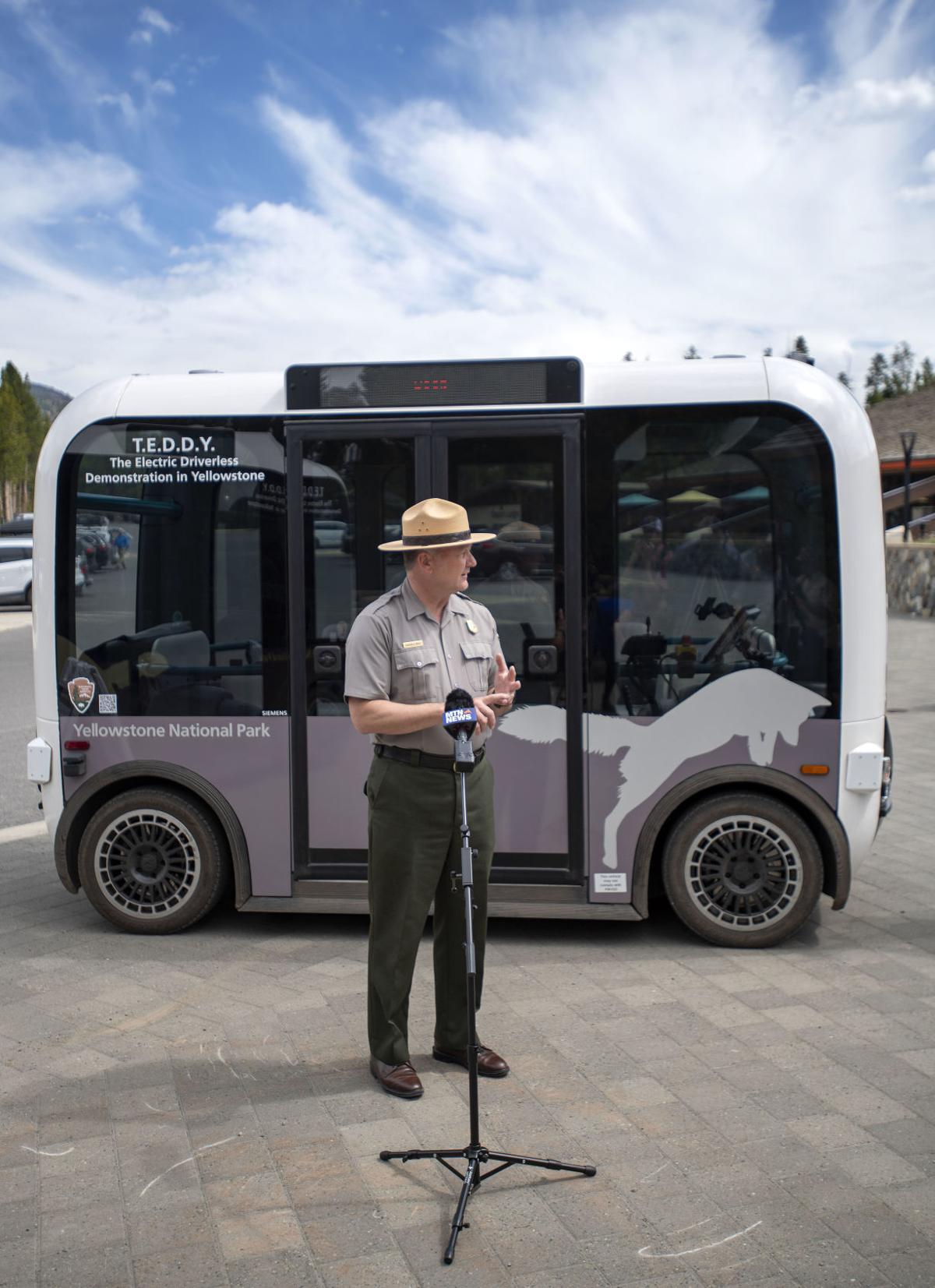 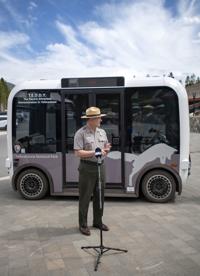 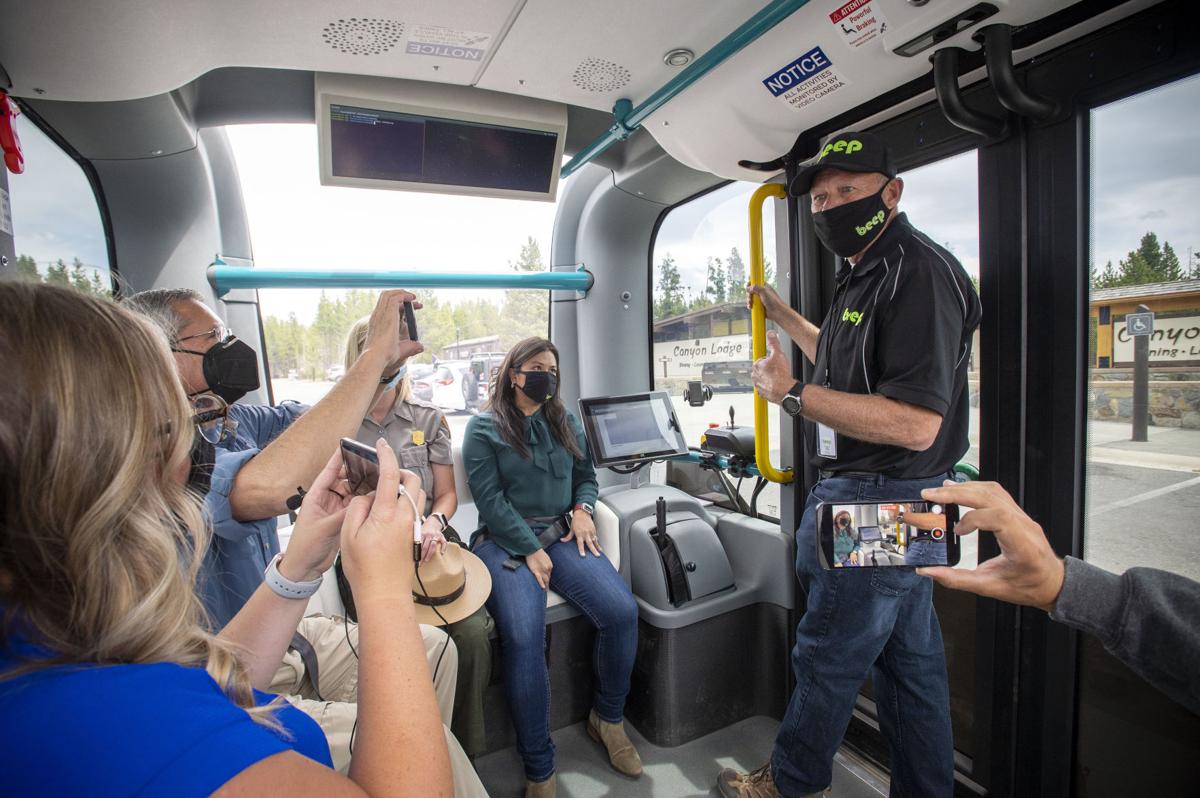 Beep field tech supervisor Bob Ryner gives a demonstration of one of the automated electric shuttles at Canyon Village in Yellowstone National Park. Although driverless, the vehicles will always have a trained “ambassador” on board in case an unexpected object is in the path of the shuttle’s preprogrammed route. 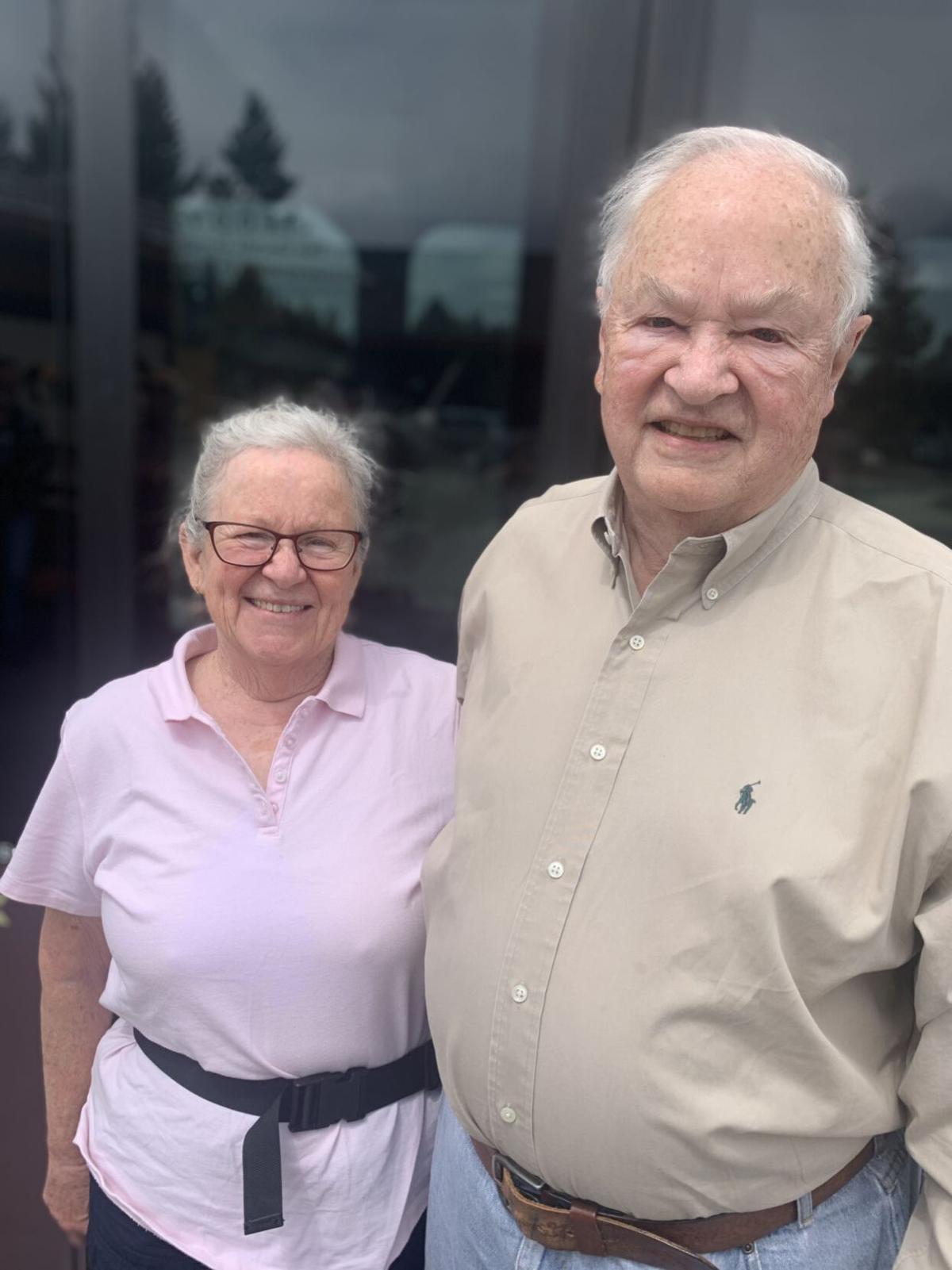 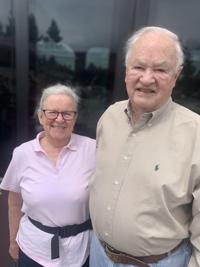 CANYON VILLAGE — Even in the twilight years of life, Walt McMahon isn’t one to eschew a technological innovation when he sees one.

So when the University of Illinois emeritus economics professor happened upon an all-electric, driverless mini-bus during his first-ever trip into Yellowstone National Park on Tuesday, he was immediately intrigued.

“This thing is the future,” McMahon said. “I’m 93, so if these things are going up to the top of a hill or a long way, that would be perfect.”

McMahon’s travel mate, Eileen Borgia, thought an automated shuttle system like the one launching in Canyon Village this week would be a worthwhile investment elsewhere. The couple was on a western roadtrip, and while passing by the Tetons came across the weekend edition of the Jackson Hole Daily, which printed a cover story about the region’s unprecedented early-summer visitation.

“You could use them in Jackson Hole, with 38,000 people on Memorial Day, huh?” Borgia said.

The two automated vessels that drew McMahon and Borgia’s attention will start shuttling the public around Canyon’s developed area eight at a time on Wednesday morning. The day before, park staff and employees of Beep, Inc. gathered to show off their pilot project, dubbed TEDDY for “The Electric Driverless Demonstration in Yellowstone.” The goal is to help alleviate congestion in one of the most cramped parts of the park while leaning into a transportation technology that has a low carbon footprint.

“Hats off to Beep,” Yellowstone Superintendent Cam Sholly said. “They came in here two months ago, and there was still three feet of snow. There’s a big difference between implementing this technology in Yellowstone, versus Florida.”

By the time the first public passengers step aboard, plenty of test runs will have passed by. Among the guinea pigs were journalists, who were chauffeured around Canyon by Olli, the $300,000 electric vehicle manufactured by Knoxville, Tennessee-based Local Motors. Beep, a Florida-based autonomous Mobility-as-a-Service (MaaS) provider, organizes the shuttles but doesn’t make the vehicles.

On Tuesday, while the computer did most of the driving along a pre-programmed route that spanned about a mile and a half, bus attendant and Orlando, Florida, denizen Bob Ryner was along for the ride to pull the brake just in case.

“This is the reason I joined Beep, is to be here,” Ryner said. “As the shuttle operator, I don’t care what the route says if I see a bear with a leg or something in its mouth. I’m going to stop and look.”

Although no grizzlies needed braking for along the test run, there were some unexpected obstacles. When one of the vehicle’s dozen cameras and sensors detected a New Mexico-plated camper van protruding out into the road, the autonomous system didn’t know what to make of it. On its own, Olli slowed and then stopped. Ryner tapped a touch screen to engage the manual mode, then used a joystick to maneuver around the oversized camper. He stopped again, reengaged the autonomous mode and was back on his way hands-free.

Speed wise, Olli’s more like an e-bike than a Tesla. During autonomous driving mode, the shuttle hums around at between 6 and 12 mph. Pedestrians nearby cause the vehicle to ease, as do parking lots and crosswalks preprogrammed to trigger a slow-speed, hyper-vigilant mode.

Although generally smooth riding, commotion nearby can make a lift somewhat herky-jerky. At a four-way stop Olli — operating in autonomous mode — started easing forward, then stopped, totally deferential to an overly eager nearby motorist who zipped into the intersection out of turn.

Programming the Olli vans for Yellowstone wasn’t straightforward. Beep staffers like Shuttle Specialist Manager Cornelius Smith showed up while there were still snowbanks lining the road, which complicated teaching the computer how to read the surrounding landscape.

“It did create some confusion,” Smith said. “But then we came in with the National Park Service maintenance team, and we got the roads cleared to the proper distance needed, and then we began mapping.”

“We are incredibly happy with how the vehicle is performing in this environment,” Asa said aboard the Tuesday trial ride. “This is not what’s considered a traditional road, where you have pavement markings.”

Instead of reading center lines, she said, Olli had to be trained to always stay on one side of the road.

There are no delusions that having two slow-speed eight-passenger shuttles running for the next three months is going to be a cure-all to the transportation woes in Yellowstone, which could attract as many as 5 million unique visitors in 2021.

“A shuttle system by itself isn’t going to solve things,” Sholly said. “Anything we do with shuttles is going to be connected to other actions we take in high visitation areas.”

The two Olli shuttles will give lifts around Canyon seven days a week, first-come, first-served. They’ll run in 3-hour shifts, followed by a 2.5-hour charging break, with rides starting at 7 a.m. and ceasing for the day at 9 p.m.

“The purpose of this deployment is to test the technology in a national park,” Yellowstone visitor use management coordinator Christina White said. “For that reason, we’ll be operating on two different routes this summer.”

“Our goal is to learn as much as we can,” she said, “and apply the lessons in national parks in the future.”

For the next five weeks the Olli shuttles will take passengers from the visitor center to the Moran Lodge and then the Washburn Lodge. Come July 14, they’re changing it up, with stops at the visitor center, amphitheater, and Middle Campground and Upper Campground. Both routes are in the 1.5-to-2-mile range.

Note—This story has been updated to clarify that Local Motors is based in Knoxville, not Nashville, Tennessee. A misspelling of the name Olli was also fixed.