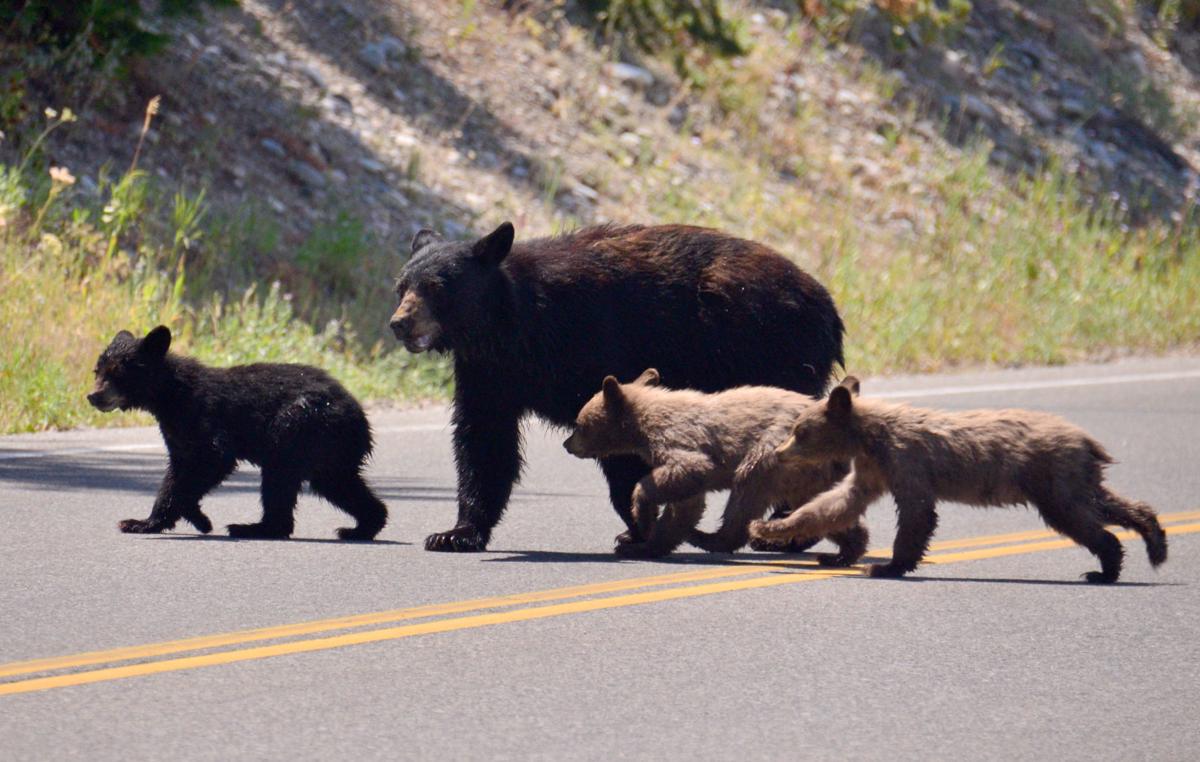 This black bear sow and her three cubs, which frequented the Signal Mountain Lodge area of Grand Teton National Park this summer, are believed to be the ones removed by park rangers after the bears received several food rewards from tourists who ignored common safety rules. 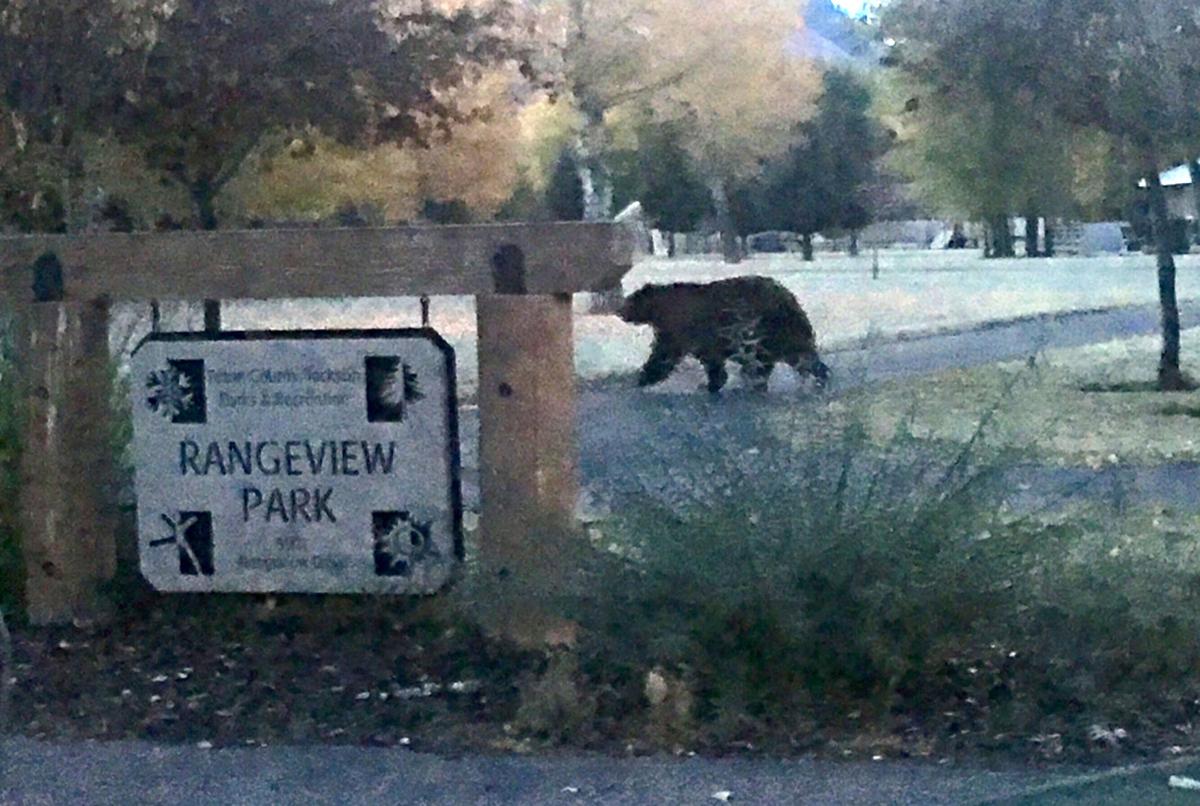 A large black bear roams Cottonwood subdivision. Wyoming Game and Fish decided to euthanize it after it returned to the densely populated area several days in a row.

This black bear sow and her three cubs, which frequented the Signal Mountain Lodge area of Grand Teton National Park this summer, are believed to be the ones removed by park rangers after the bears received several food rewards from tourists who ignored common safety rules.

A large black bear roams Cottonwood subdivision. Wyoming Game and Fish decided to euthanize it after it returned to the densely populated area several days in a row.

Margaret Gordon learned a bear was on the loose about 20 minutes after her youngest daughter had ridden her bike to the bus stop.

“I ended up calling the school to make sure she got there” on Oct. 8, Gordon said. “It was a little alarming.”

Her older daughter later said she saw the bear cruise through their backyard and make its way down the street.

“She said it was so busy eating that when she pulled her bike out of the garage, it didn’t even look in her direction,” Gordon said. “She just hopped on her bike and rode the other way, quickly. We told her after she told us that story, ‘Feel free to stay in the house and call us. A bear is a perfectly fine excuse to be late to school.’”

Despite a recent rash of bears spotted near civilization, the Wyoming Game and Fish Department said this year is a below-average one for human-bear conflicts.

“Really, this summer we had a pretty slow year as far as bear conflicts go here in the valley,” spokesman Mark Gocke said.

A cluster of headlines from the last week doesn’t tell the whole story. In an average year Game and Fish responds to between 60 and 80 bear conflicts. This year is a bit lower, with between 50 and 60 reported so far. A few weeks remain before bears retreat to their dens for the winter.

In dry years lacking an abundant berry crop, reports of bear conflicts tend to increase. Mike Boyce, a large carnivore biologist, remembered 2012 as a particularly bad one. He responded to 200 conflicts that year.

“I’m very disappointed in the actions of wildlife personnel this past week,” William Kunkle, a Wilson resident, wrote in an email. “Two black bears have been killed and two cubs have both lost their mother and their freedom. All of the bears should have been relocated. I don’t want to hear, ‘It’s a tough decision.’ Do your job, which is to protect both humans and wildlife. The easy decision is killing the bears. The hard work is removing them.”

Others were slightly more supportive, especially in the case of the bear that was lurking close to five schools and even more bus stops.

“It is sad, and I recognize why so many people would be upset,” said Andrea Weenig, a mother of three in the Ellingwood neighborhood.

She saw the bear Monday morning and called it in, then trailed it in her car and honking at it occasionally until it moved west, away from homes.

“It kind of seems like even without the [grizzly] bear hunt, there’s been a lot of bears dying recently due to conflict with humans,” she said. “But I think this was a good call, given the proximity to so many kids. At dawn and dusk, they’re getting to their sports, going to school early, on bikes and may be alone. That’s not a good outcome.”

Game and Fish said the recent deaths represent only one tool of many in its larger management strategy for the species. Education, officials said, is the most important tool to combat conflict.

“Sometimes people think our only course of management action is to trap a bear, and it’s not,” Gocke said. “We go out on the ground and look for where the bear has been. Has it gotten a food reward? Are there other insecure food or bear attractants that are available? And we try to button them up. We go door to door and let people know if there’s a bear in the area. A lot of the time, that prevents conflicts from happening and of course, nobody hears about that.”

If a bear isn’t considered a threat to people, it’s a candidate for relocation. But the bears can’t be relocated outside state lines and Game and Fish prefers to keep them in the core of the ecosystem’s population. Despite the best efforts to move bears as far away as possible, bears sometimes make it back to the area where a conflict occurred within as little as two weeks.

“We think of the Greater Yellowstone Ecosystem as a pretty big, expansive area,” Gocke said. “But in the bear’s world, it’s really not.”

Subadult males are most transient, with the ability to traverse the entire ecosystem.

“There’s only so many places you can go, quite honestly,” said Dan Thompson, large carnivore supervisor.

The type of conflict a bear was involved in — trash, livestock, property damage — is considered when assessing potential locations, and relocation tends to be a popular option with the public only if it’s away from where people live.

“If we moved them to the moon, they’d say, ‘Why didn’t you move them to Jupiter?’” Thompson said. “I understand there’s a lot of people out there that feel like we have too many bears and any time we move a bear to them, we’re putting more bears in their backyard. That’s not what we’re trying to accomplish with any of this. We’re trying to break the behavioral mold of a bear that got into a conflict so it can go on about its life without getting into trouble.”

If a bear doesn’t stay off the radar after a first relocation — such as the Cottonwood bear, which had been relocated in 2015 — Game and Fish officials aren’t hopeful it’ll work again. Bears also become trap-shy and difficult to catch after repeated attempts.

“Our experience has been if they do it a second time, there’s a really good chance they’ll do it a third time,” Gocke said. “That plays into our thought process when we have a bear and we’re looking at its history.”

Critics say Game and Fish kills bears because it’s cheaper than moving them, but officials said cost isn’t factored into the decision to relocate or not.

Killing the animal is seen as the last resort if other options don’t protect the public and the bear, Gocke said.

“Having to remove an animal from the population or put an animal down is probably one of the worst tasks about our job at Game and Fish,” he said. “We take no pleasure in it whatsoever.”

People would be remiss, Gocke said, to associate any Game and Fish actions as retaliation for the recent relisting of grizzly bears as a federally protected, “threatened” species under the Endangered Species Act and the resulting cancellation of a hunt this fall.

“I can assure you that’s not happening at all,” Gocke said. “That’s totally unrelated. Nobody wins in a bear conflict, and we’re trying to do whatever we can to reduce conflicts and keep bears wild and people safe, basically.”

“If I never had to catch another bear in my life, I would be very happy,” he said.

If Sofia Jaramillo was commenting on the anti-bear activists in our midst, I can see why she wanted to...These guys should move to the middle of some big-city where the bears that they hate have been eliminated by humans a long time ago.

A comment has been denied. Please refrain from personal attacking other commenters. If you see a comment that does so please report it.
- JHNG Producer

You see a predator in your yard, it is your responsibility as a parent to eliminate the threat. 454 casull is my preference. Have you lost your mind or do you want to lose a kid? No animal on earth is worth one human life. Not in my back yard!

I don't know of too many municipalities that would allow discharging a firearm within the city limits due to wildlife in your yard. You're all talk Wild Bill.

In Florida, it is a criminal offense to knowingly discharge a firearm in any “public” place, or a place frequented by members of the public. Discharging a firearm in public can carry misdemeanor or felony penalties, depending on whether the shot originated from a vehicle. This is per Florida statute 790.15(1). You're right....you don't need anyone's permission. But if you do, you can face 12 months in jail and a $500 fine. So, have at it old man.

Better not shoot any armed intruders in your home either, you would be breaking the "law", Mr. Westemeier.

Interesting comments from wildlife officials......especially the last one.

It's interesting how people focus on the risks associated with bears.....yet seem to completely ignore other risks, which are much higher......for example risks related to drunk driving.

So, a bear comes into close contact with a child on a bike and parents aren’t alarmed and demanding complete removal by game and fish? I see a bear around my kid, the bear is dead! My kid is alive. That’s my story and I’m sticking to it! God bless America.

Mr. Addeo: That is a 100% NATURAL reaction. The eco-left/greenies seem to think human beings are not a part of the natural world.

Mr. Guenter; You are correct. Aren’t you happy that the bears let us go to work and live in our houses on their land?

All predators are a NATURAL enemy of human beings. The animal loving/human hating green/eco/etc.s will never acknowledge that FACT. See a bear/wolf/cougar/coyote in your yard.... SHOOT IT.

I acknowledge that Wyoming has an elk, pronghorn, sage grouse, domestic dog and cat problem and they're a nuisance and threat to the citizens' safety. If one ventures into your yard, shoot it. End of story. Some of Wyoming's male population also have a masculinity disorder that's an even bigger problem.

What do you think you're debating? Snowflakiness abounds.