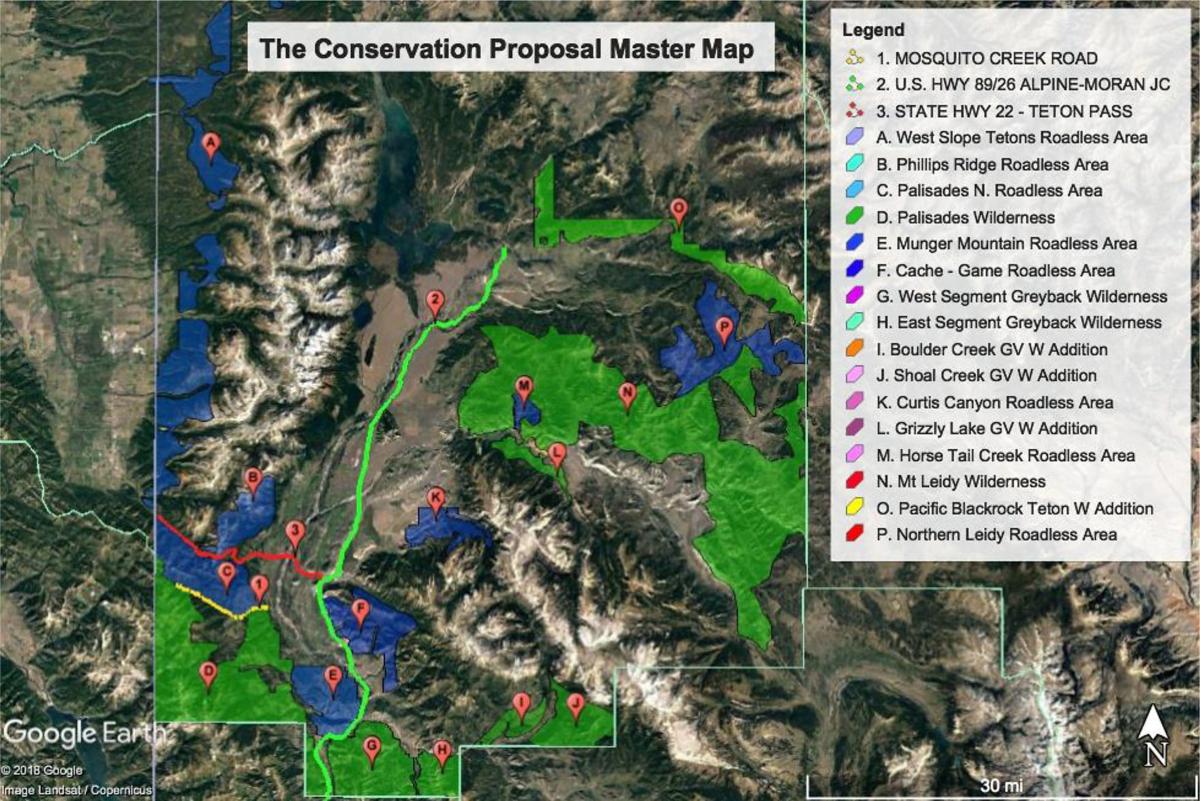 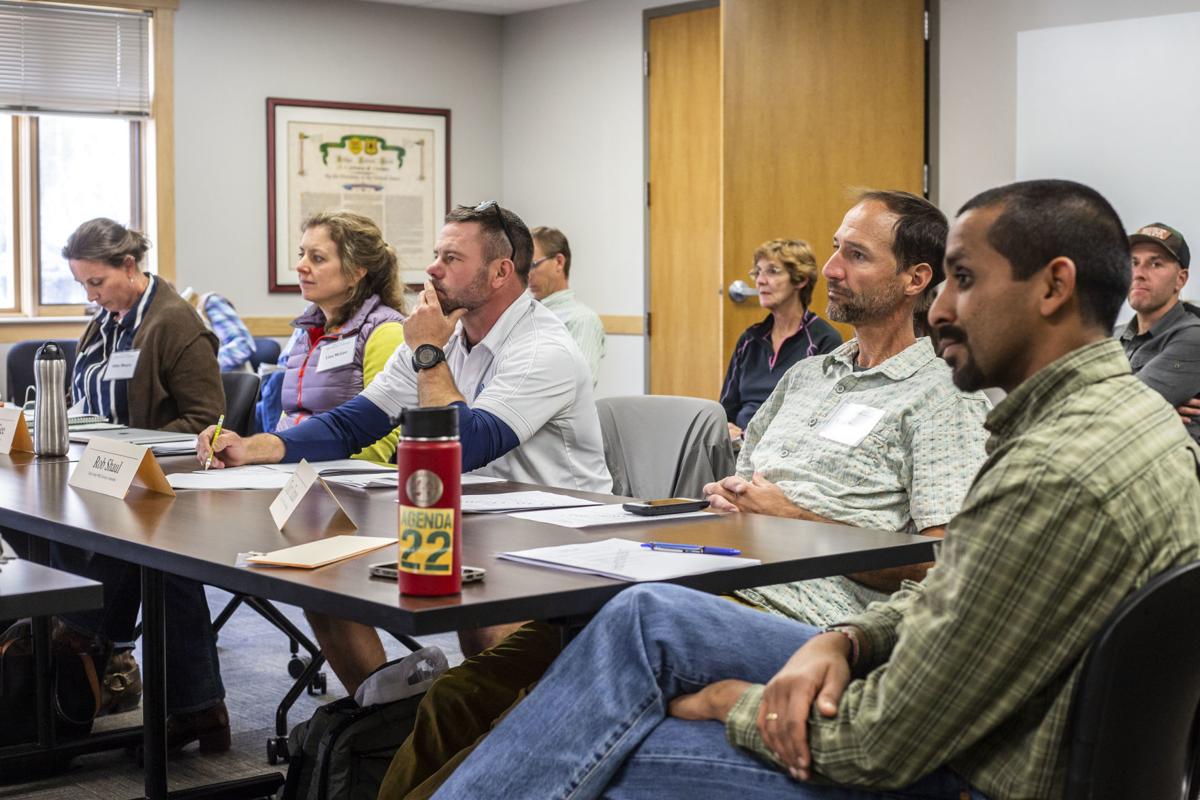 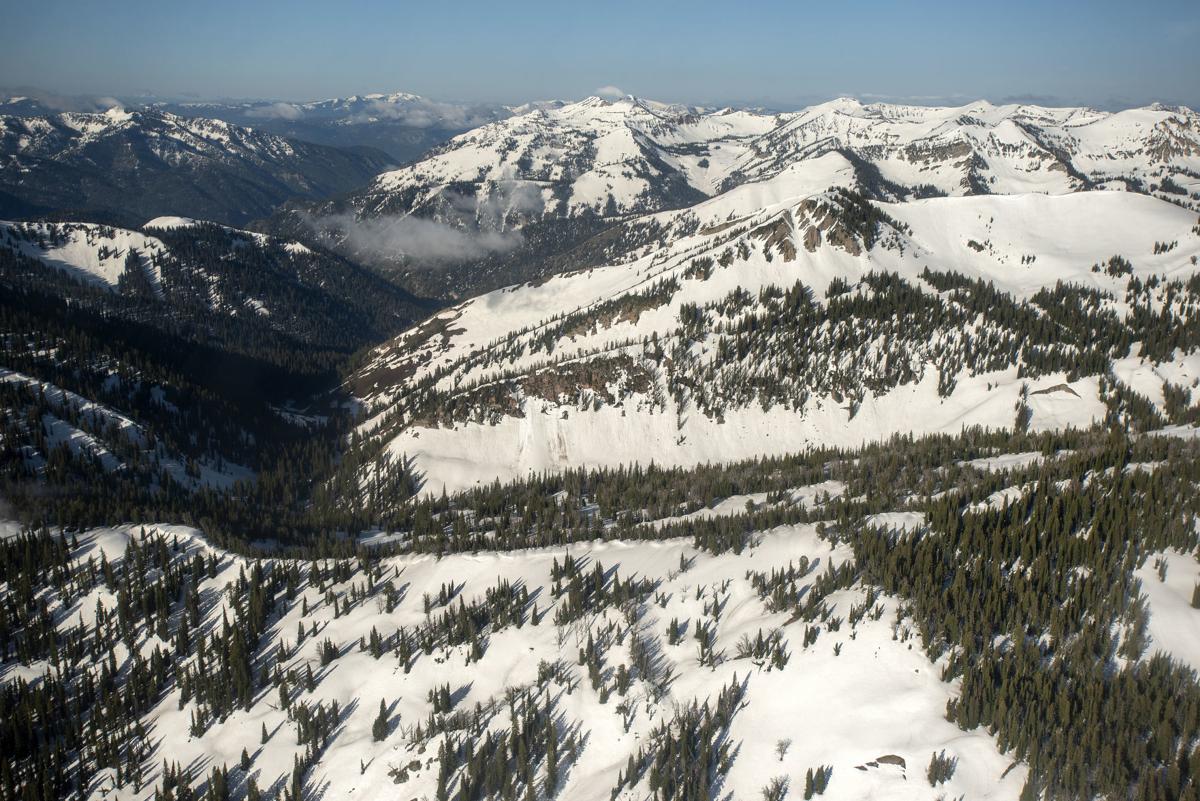 The Palisades Wilderness Study Area is one swath of land the Wyoming Public Lands Initiative could not devise a collaborative recommendation for.

The Palisades Wilderness Study Area is one swath of land the Wyoming Public Lands Initiative could not devise a collaborative recommendation for.

Elected officials and the residents they represent are tasked in the coming month with judging three plans that propose a future for wide swaths of Teton County’s vast federal lands.

There are three proposals to assess, instead of one, because an 18-person Wyoming Public Lands Initiative committee the county devised could not agree on a collaborative plan. The path forward is unclear, because the Teton County Board of County Commissioners, which requested a single plan, has not indicated what it will do.

“If there’s not one recommendation, the commission has not said what they’re going to do,” Commission Chairman Mark Newcomb told the committee minutes before it voted to disagree last week.

Commissioners will have the option of choosing one recommendation, gluing parts of each proposal together or bowing out of the initiative entirely.

The initiative is part of a planning effort by the Wyoming County Commissioners Association to come up with locally driven recommendations for what to do with 45 wilderness study areas in the Equality State. The wilderness-quality lands were designated by Congress decades ago, but they have been classified and managed in a state of limbo ever since.

The exercise proved a challenge for the large group, especially because it was supposed to be consensus-based. Committee members who were appointed stood for issues like conservation and wildlife, and others represented recreational interests like mountain biking and heli-skiing.

Some committee members blamed a lack of collaboration and compromise for the failure to come up with a shared vision.

“We committed in this process to compromise, and I do not see any compromise other than token concessions,” Abigail Moore told her fellow committee members.

She was appointed to represent the general public.

Some members were displeased by how some of their counterparts conducted business. Fingers were pointed at the inability of pro-motorized recreation and wilderness advocacy representatives to meaningfully negotiate and respect other interest groups’ positions.

John Hebberger Jr., the group’s petroleum industry representative, said he voted firmly against motorized and wilderness-centric recommendations because he was cut out of their deliberations.

“The charter that we all signed required this to have been a collaborative process,” Hebberger told fellow committee members. “There are some things that I like in all [the plans], and there are a lot of things that I could live with. The reason that I voted [to block] the two other proposals is because I was never, ever once invited to provide input into the other proposals.”

Other committee members pushed back on the charges. Sierra Club staffer Lloyd Dorsey, who represented national conservation, said he compromised in his mind, but couldn’t sign off on a proposal that drifted further from conservation without abandoning his organization’s cause.

“I felt compelled, on behalf of the organization I work for, to do the best I possibly could in this process,” Dorsey said. “[I] didn’t hit a home run in many instances, and there were compromises, even though some folks may not see those as enough compromise.”

Before committee members cast their vote Aug. 8, the members of the public who filled a conference room at the Bridger-Teton National Forest headquarters were given a last chance to speak.

Some folks who spoke up criticized the Wyoming Public Lands Initiative’s focus on interest groups.

“Nobody’s talking about what’s good for the land, and what’s best for the land in and of itself,” Bobby Griffith, who identified himself as a lifelong Wyoming resident, told the committee. “In this day and age, there’s so little totally wild land left. I think that’s outrageous, that we’re not thinking about what’s best for the individual land itself and how we can maintain what we have.”

Mike Merigliano, a Teton Valley, Idaho, resident, said that in his view the initiative’s county-line approach was misguided.

“I think the whole approach of Wyoming putting this on a county scale was a terrible idea,” Merigliano said. “Look at the Palisades ... it really should be looked at in a holistic way, that big chunk of ground.”

Of the three plans, one was collaborative in nature. The proposal, dubbed MAWG for a mixed-bag working group that met at committee member Rob Shaul’s Mountain Athlete gym, received the fewest “block” votes from the committee, six.

A proposal advanced by “multiuse” and motorized recreation advocates garnered the least support. Thirteen of 18 committee members voted to block the recommendation advanced by the committee’s snowmobile representative, Mike Mielke. Although the plan was the least popular among committee members, several members of the public spoke out in favor of it.

“Those numbers about what’s available for multiuse ... those numbers are really eye-opening,” said Bill McNamara, a mountain biker. “It makes us feel like we’re being hunted out of these areas, like pushed out as mountain bikers. It’s hard to understand, because we’re already using so very little of it.”

The Teton Wildlands Conservation Plan, advanced by Dorsey and general public representative Bruce Hayse, received block votes from seven of 18 members. This wilderness-centric plan was the most popular when taking into account all the votes cast by committee members on a 1-to-5 scale of favorability.

Teton County plans to open a public comment period on the three plans Friday, and commissioners will hear from a spokesperson for each proposal at their Monday meeting. Commissioners will vote on what to do at their Sept. 18 meeting, Newcomb said.

If Teton County backs out of the initiative, it won’t be the first. Park County’s process did not result in a recommendation. Of eight participating counties, only Johnson County has a county commissioner-sanctioned proposal. Others, like Fremont, Sublette and Washakie, have proposals that are in varying stages of county review, Wyoming County Commissioners Association Executive Director Pete Obermueller said.

“Everyone is proceeding at their own pace,” Obermueller said. “They’re all kind of going at about the same timeline.”

The Wyoming Public Lands Initiative, he said, was not structured in a way that instructs counties how to proceed if their committee ends up divided.

“Essentially, it was left to each individual county about how to proceed,” Obermueller said. “Your board of county commissioners will have to make a determination.”

The three proposals are attached to the online version of this story at JHNewsandGuide.com. Read summaries of the plans below.

A group of 22 snowmobiling, dirt-biking, heli-skiing and mountain-biking advocacy groups signed onto this plan, which proposes new wilderness areas in Teton County.

The recommendation was supported by more than 1,500 handwritten, grassroot comments turned into the committee, its supporters say.

The alliance’s recommendation asks for the release of the Palisades and Shoal Creek wilderness study area’s protective designation. In exchange, the proposal would ban oil and gas and mineral exploration and production throughout the county.

The multiuse proposal addresses no land management designations outside the Teton County sections of the wilderness study areas.

The so-called “Mountain Athlete Working Group” proposal came from a group of committee members who met at Rob Shaul’s gym through the course of this year.

“It was collaboration-driven,” said Shaul, appointed to represent the general public. “Everyone on the committee was invited. We worked on a middle-ground proposal, so compromise was mandated, and we were there to get some work done.”

Federally codified roadless areas in Teton County would increase by 240,000 acres under the plan.

The plan would add snowmobiling access on the north end of the Palisades near the Mail Cabin Creek corridor, and would connect a singletrack motorized trail in the Mosquito Creek area into Idaho to benefit dirt bikers.

The plan advanced by Dorsey and Hayse would convert the majority of Bridger-Teton National Forest land in the county that lacks protections into wilderness, while allowing motorized and mechanized uses in other areas.

Specifically, the plan would designate 254,000 acres of new wilderness in the Leidy Highlands, Buffalo Valley, Willow Creek, Beaver Mountain, Palisades and Grizzly Lake areas. Another 124,000 acres would be designed as “Teton Conservation Areas,” where new road construction, commercial timber harvest and mineral development would be banned.

“We feel that this plan complies with the vision statement imparted by the town and county comp plan,” Dorsey said. “It preserves and protects the areas ecosystem in order to ensure a healthy environment, community and economy for current and future generations.”

I cannot miss the irony and humor in some of these groups and #1 in the humor category is the MAWG. This Mountain Athlete Working Group certainly sound like they want their cake and eat it too. These working, mountain, athletes want to be flown, biked or snowmobiled into the wilderness. Hiking or riding a horse, which would be less intrusive for any remaining wildlife in the Palisades, seems to be too strenuous for this hearty elitist group.

Well, not quite sure where you're from, but in January the snow would be over the horse's head. All these proposed Wilderness areas need to be abolished. Wyoming already has enough Wilderness Area, and, Wilderness areas that have been designated that, by the original Wilderness act, should have never had Wilderness designation