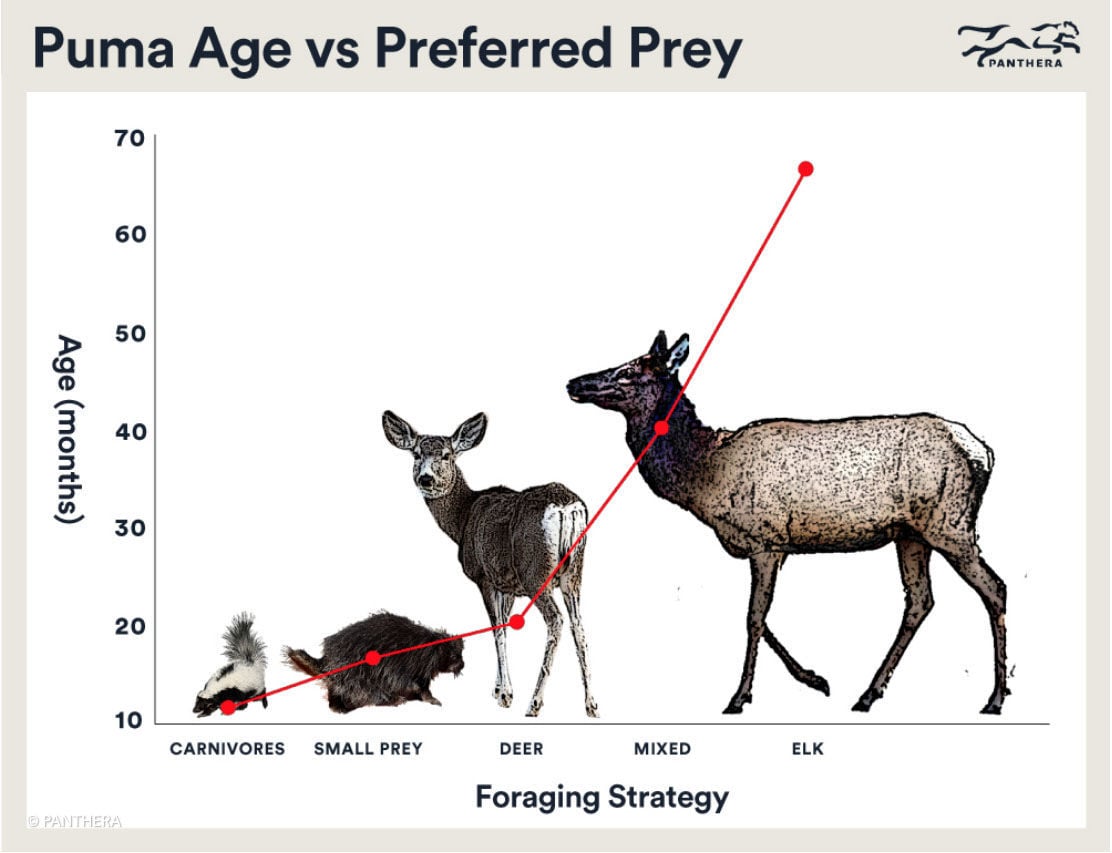 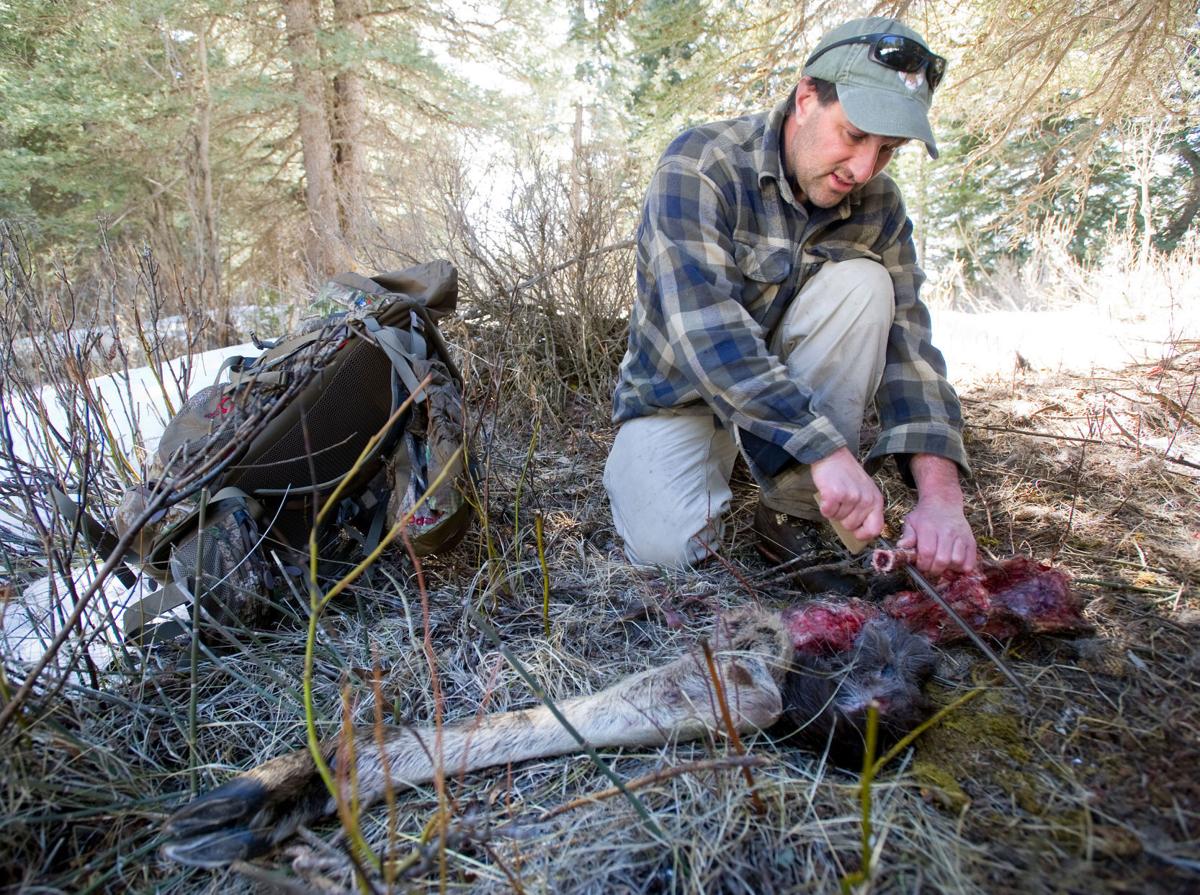 But new research from the former Teton Cougar Project suggests that a heavy lion harvest could be having an unintended effect. Lion hunters, who use hound dogs to tree cats and have the luxury of being choosy, tend to kill older cougars, which happen to be elk specialists. Left behind are younger cats that tend to eat deer.

“I think it’s fair to say that a lot of people think that mountain lions are born little killing machines, and when they set off on their own they’ve already got everything they need,” said Mark Elbroch, a former Jackson Hole resident who directs the puma program for Panthera. “What this research emphasizes is that mountain lions are continuing to learn and refine their hunting skills, even after they leave their homes and even after they establish a territory of their own. That’s pretty cool.”

To make that determination, Elbroch and his Teton Cougar Project predecessor, Howard Quigley, sorted through the 4 1/2 years of dietary data from 13 lions that roamed the Gros Ventre River drainage and points farther north. The findings are published in the latest edition of the academic journal of Conservation Science and Practice.

The relationship between mountain lion age and primary prey was statistically strong and straightforward: “In short,” the study states, “the older the animal, the larger the prey it specialized upon.”

Cats that had just been cast off by mom predominantly ate small prey, meaning nonungulates, Elbroch said. Once mountain lions reached age 2 or 2 1/2 years and were setting up in a new territory, they switched to eating mostly deer. Three-and-a-half to 4-year-olds split their calories somewhat evenly between deer and elk. Come age 5 or 5 1/2, the Teton Cougar Project’s research cats predominantly ate elk.

In Elbroch’s statistical analysis, age accounted for 78 percent of the variation in mountain lion diets.

The study ties back to mountain lion hunting because killing cats can be used as a tool to prop up puma’s prey populations, especially mule deer, which have declined due to drought and habitat loss around the West.

Colorado’s Parks and Wildlife has spearheaded a deliberate, controversial effort to do just that, hiring contracted hunters to kill lions and black bears in the Piceance Basin with the explicit goal of helping mule deer. That predator suppression program is being litigated, but it’s also underway and the results are pending.

It’s routine for wildlife management agencies throughout the American West to account for elk and deer populations when setting lion hunting seasons.

The first sentence of the Wyoming Game and Fish Department mountain lion management plan includes a goal to “maintain ungulate populations at established objectives or in line with current habitat conditions.” Dan Thompson, who oversee the state’s carnivore program, couldn’t be reached Tuesday for an interview.

Broadly, Elbroch said, hunting isn’t threatening the existence of lion populations, which have actually expanded and thrived despite hunting and human development in their habitat.

“Without doubt, hunting as it’s managed in the United States and Canada is not a threat to the number of mountain lions on the landscape,” he said. “As much as some groups would love to say that hunting is the greatest threat to mountain lion populations, it’s just not true.”

Although hunting isn’t about to wipe out the species, it’s also likely having untold consequences for mountain lion populations.

“Managers are trained to manage for numbers, and they’ve done a fantastic job managing for these numbers,” Elbroch said. “The next level of management is to start to look at all the effects of hunting on a population. What are we doing to its age? What are we doing to the social structure? How might it affect prey populations?”

The possibility of hurting mule deer by killing the most mature lions on a landscape through hunting is just one of the possible indirect effects. Wyoming Game and Fish data suggests that lion hunting has recently skewed the age structure toward younger cats. In 2005, 60 percent of Wyoming mountain lions killed by hunters were adults, but by 2015 mature cats were just 40 percent of the harvest.

“If you keep hammering a population and keep the average age of cats at 2 to 3 years old,” Elbroch said, “you are keeping a population that predominantly eats mule deer functioning on the landscape.

“What that does to mule deer, I have no idea,” he said. “We haven’t made that leap. But it’s certainly provocative enough to say, ‘Whoa, maybe we should look at this a little bit more.’”

Leave it to an anti-hunting organization to try to spin this as if it may be hurting deer. Seriously? Those large adults taken are breeders so by reducing their numbers you reduce the overall population of mountain lions, allowing more deer (and other wildlife) to survive.

Killing a mature cat doesn't mean a younger cat magically appears to kill deer. Those cats are already there eating deer. Meanwhile, mature cats do not have exclusive diets of elk, at least not in Wyoming where I have hunted them. Mature lions kill plenty of deer too.