Legislation that would have criminalized the YouTube-popular practice of running over coyotes with snowmobiles died the day it was introduced, but a wildlife activist is not deterred.

Teton County Rep. Mike Yin’s House Bill 288, titled “Animal cruelty — snowmobiles,” was introduced Tuesday but apparently did not make it to committee before the same-day deadline of Jan. 29 rolled to a close. Hours after the freshman lawmaker’s legislation failed, he said he was drawn to the topic by videos that landed in his inbox that showed people on snowmobiles running over coyotes.

“That’s something that we should not have in Wyoming,” Yin said. “It should not be happening, and we need to ensure it doesn’t happen in Wyoming.”

The language of Yin’s HB 288 was brief, adding a one-sentence clause to an existing animal cruelty statute.

The revision would have made it so that a person commits aggravated animal cruelty if he or she “uses a snowmobile to willfully or wantonly cause the death, injury or undue suffering of an animal, including a predatory animal.” 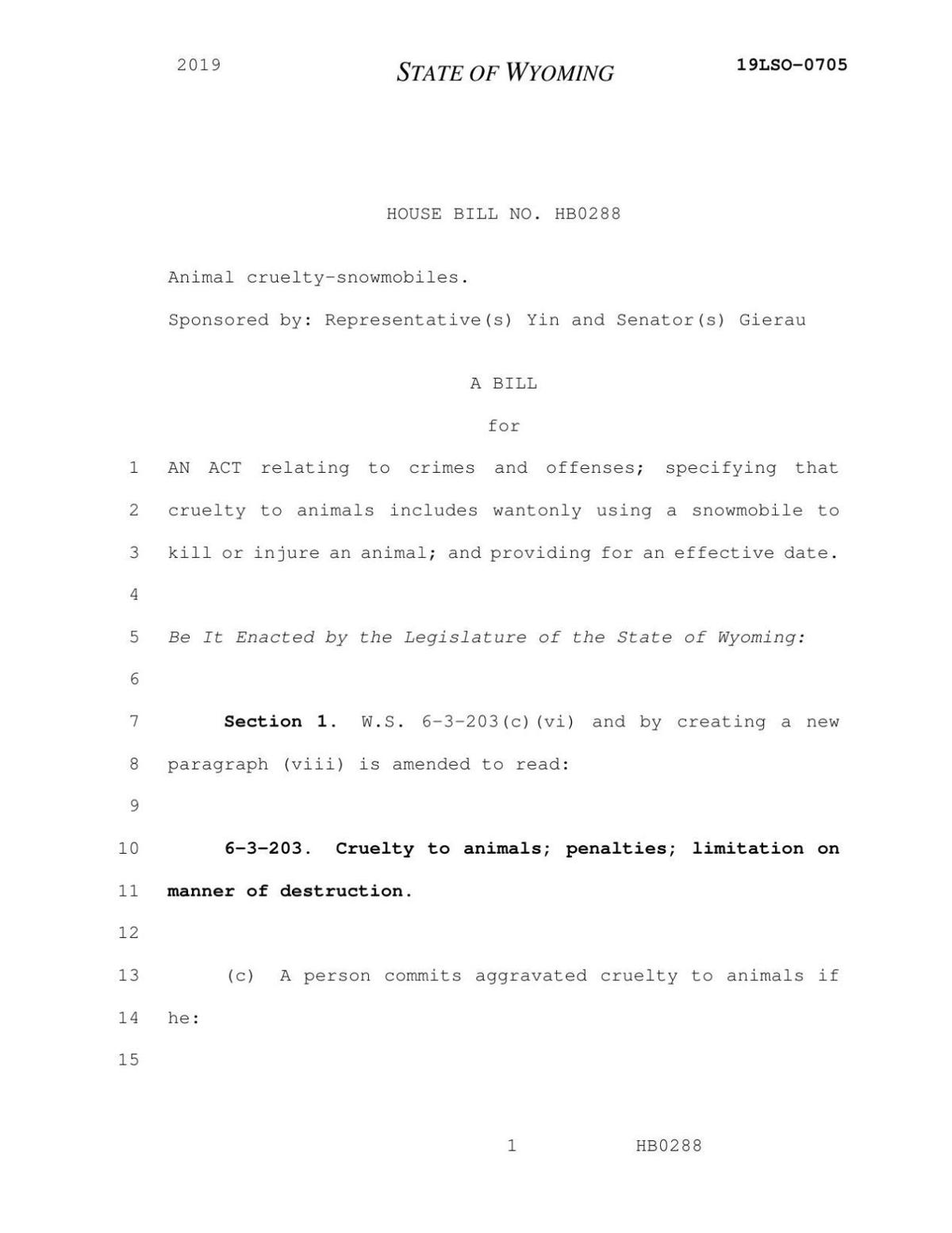 HB 288 gained only Sen. Mike Gierau, another Democrat from Jackson Hole, as a co-sponsor. Yin said he encountered little interest from other legislators. He vetted the bill to learn more about attitudes about predatory animals in more rural parts of Wyoming.

“I think they were unsure,” Yin said.

Jackson Hole wildlife activist Lisa Robertson pushed for her representatives to take action. She’s been vocal about the cause on social media, and a Change.org petition she is circulating calling to “end brutal ‘coyote whacking’ in Wyoming” has garnered 225,000 electronic signatures.

“You always think the right thing is going to be done and these really critical bills are going to make it through with ease, but it is Wyoming, and that’s not always the case,” Robertson said. “We are grateful that Mike Yin was gutsy enough to take it on. These are the type of legislators we need.”

Robertson pledged to continue pursuing the cause.

“Meanwhile,” she said, “it remains legal to continue this unconscionable sport.”

Graphic video — viewer discretion advised. Wyoming statute allows for the killing of wolves and coyotes “with, from, or by use of any aircraft, automotive vehicle, trailer, 35 motor-propelled wheeled vehicle or vehicle designed for travel over snow," in areas of the state where the animals are classified as predators. A bill introduced by freshman Rep. Mike Yin (D-Jackson) would have banned the use of snowmachines to kill any wildlife.

These days Mike Yin spends most of his time in “the ghetto.”