The Caribou-Targhee National Forest is seeking public comment about a proposed expansion of Grand Targhee Resort that would increase the ski area’s footprint by nearly 50%. Worries about damage to wildlife and water have been heard. 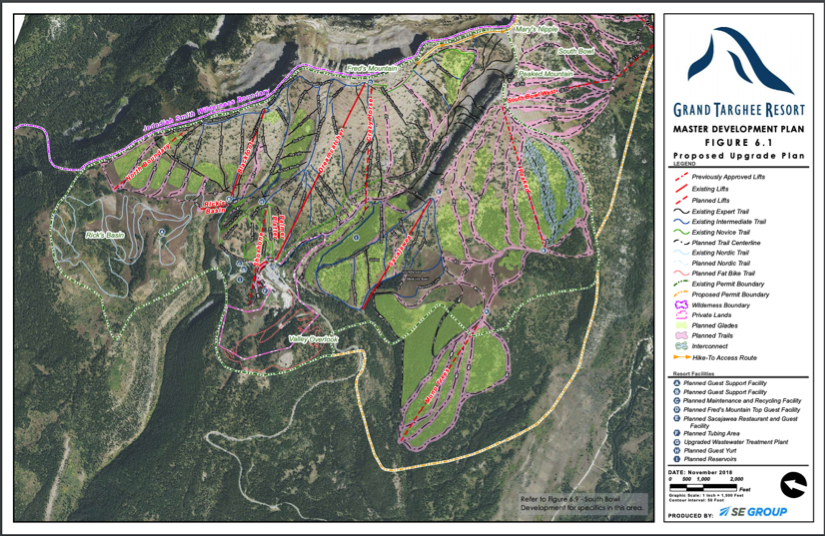 Proposed changes to Grand Targhee Resort are outlined in this map.

The Caribou-Targhee National Forest is seeking public comment about a proposed expansion of Grand Targhee Resort that would increase the ski area’s footprint by nearly 50%. Worries about damage to wildlife and water have been heard.

Proposed changes to Grand Targhee Resort are outlined in this map.

A proposal to renovate Grand Targhee Resort and expand its federal land lease area by nearly 50% has not gained much support among residents who have taken the time to weigh in.

The Caribou-Targhee National Forest is “scoping” the proposal to grow the resort into Teton Canyon and has asked the public to send comments and concerns by Monday. As of early this week, 125 letters had been posted to the national forest’s database. The large majority of people who have taken part have expressed reservations about the plan to modernize the ski area, which is seated along the Teton Range’s west slope.

“There are enough overcrowded resorts,” Edoardo Guerra wrote to the national forest. “Targhee’s charm is in its simplicity and purity. Please do not proceed with the expansion.”

“Over time,” he said, “the path of responsible stewardship will bring more value and rewards.”

Grand Targhee Resort’s plans call for adding 1,200 acres to the ski area’s current 2,517-acre permit area on the forest. The new acreage is split into two similar-sized Teton Canyon expansion zones to the south and west, which are being dubbed the “South Bowl Pod” and “Mono Trees Pod.” Together they would be served by four new ski lifts and have nearly 280 acres of cleared runs.

Other changes sought by the resort include rebuilt and all-new lifts within the current boundary, a tubing park, a guest yurt, 29 miles of new trails, 5.6 miles of new roads, a zip line, a ropes course and an aerial adventure course. Snowmaking would be expanded by 57 acres, and new on-slope restaurants would be located at the summit of Fred’s Mountain and at the top of the Sacajawea Lift. If the expansions and infrastructure were all approved and built, Grand Targhee forecasts that its “comfortable carrying capacity” would more than double, increasing from 3,000 to 7,000 skiers.

Many commenters cited environmental issues while encouraging the U.S. Forest Service to scale back the plans or scrap them altogether. Holly Guerra, who identified herself as a lifelong local Targhee skier, was worried about light pollution, aesthetics, sewage disposal and the effect on wildlife populations, such as the Teton Range’s bighorn sheep.

Greg Collins also opposed the proposed Teton Canyon expansion partly on the grounds of bighorn sheep impacts, and he attached a 2019 photo of two bighorn rams close to the proposed South Bowl connector lift to prove his point.

Teton County, Wyoming, commissioners are among the commenters, although at this juncture elected officials have not weighed in on the substance of Targhee’s plans. Their letter is about a request to join the National Environmental Policy Act planning process as a “cooperating agency.”

Cattle rancher Clyde Waddell shared worries about the effect on the Caribou-Targhee’s Mill Creek and Teton grazing allotments, where his stock graze from mid-June to the end of September. Impacts, he said, were “numerous and serious.”

“It is difficult to conceive of how the new Grand Targhee Resort activities and cattle grazing could coexist on the same piece of forest acreage,” Waddell’s missive stated.

Documents about Targhee’s proposed expansion and renovation, and instructions on how to comment are posted online at TinyURL.com/TargheeExpansion.

Comments are supposed to be addressed in a draft environmental impact statement expected out by January. That document is being prepared by a Grand Targhee consultant, SE Group, which is working in coordination with the Forest Service. A final EIS and draft decision are expected in October 2021 and a final decision by January or February 2022.

Concurrently, the Caribou-Targhee will be pursuing an amendment to its forest plan. As it stands the proposed expansion areas are located on land that currently has a “visual quality maintenance” management emphasis and is off limits to development.