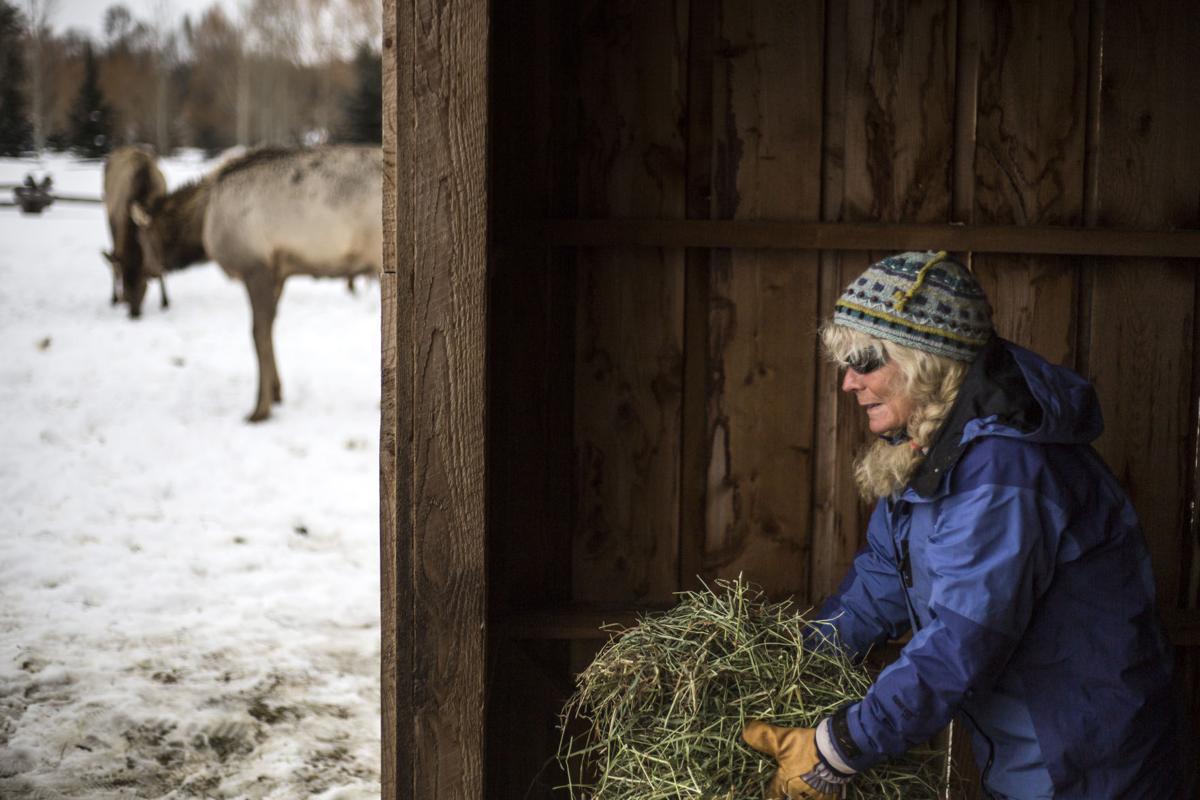 Trina Gioshes brings hay out to feed her horses as a small herd of elk gather to mooch some Monday at her home in Wilson. 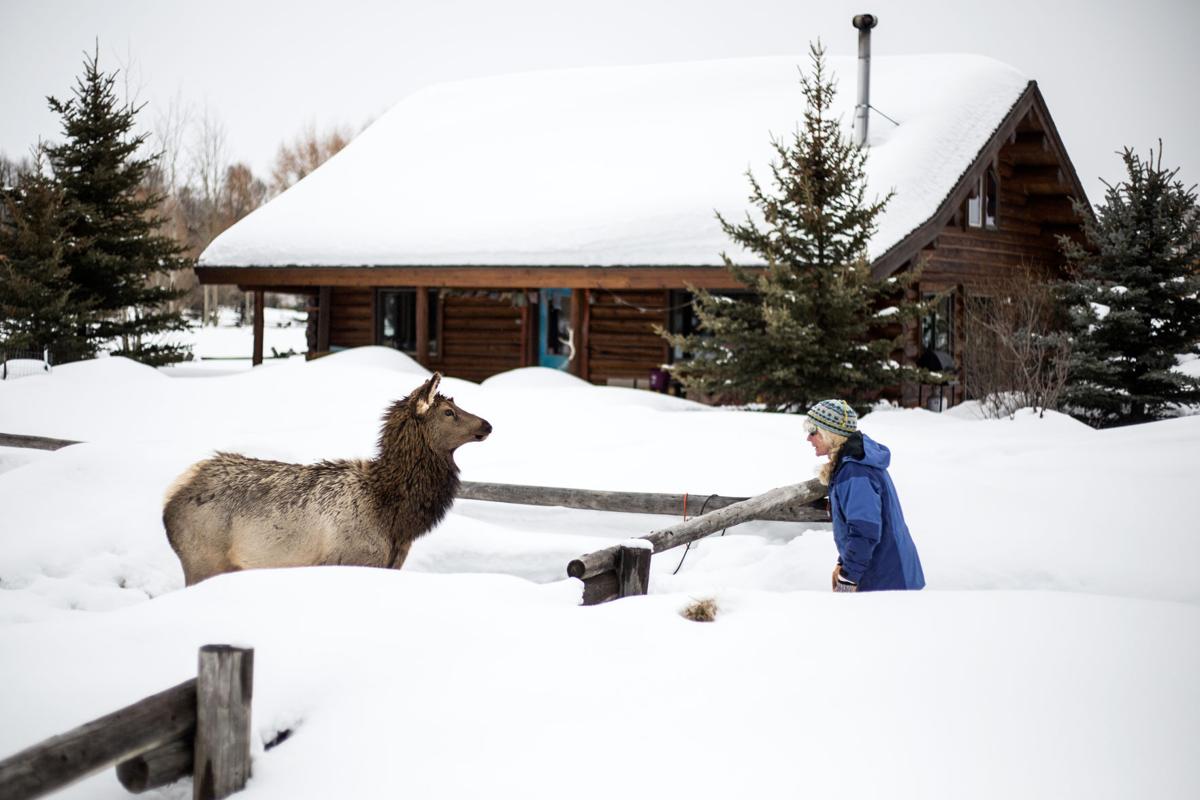 Gioshes tries to haze an elk from the only dug-out entrance to her horse pasture Monday at her home in Wilson. She advocates emergency feedgrounds because of the unusually harsh conditions animals have had to live through this winter. 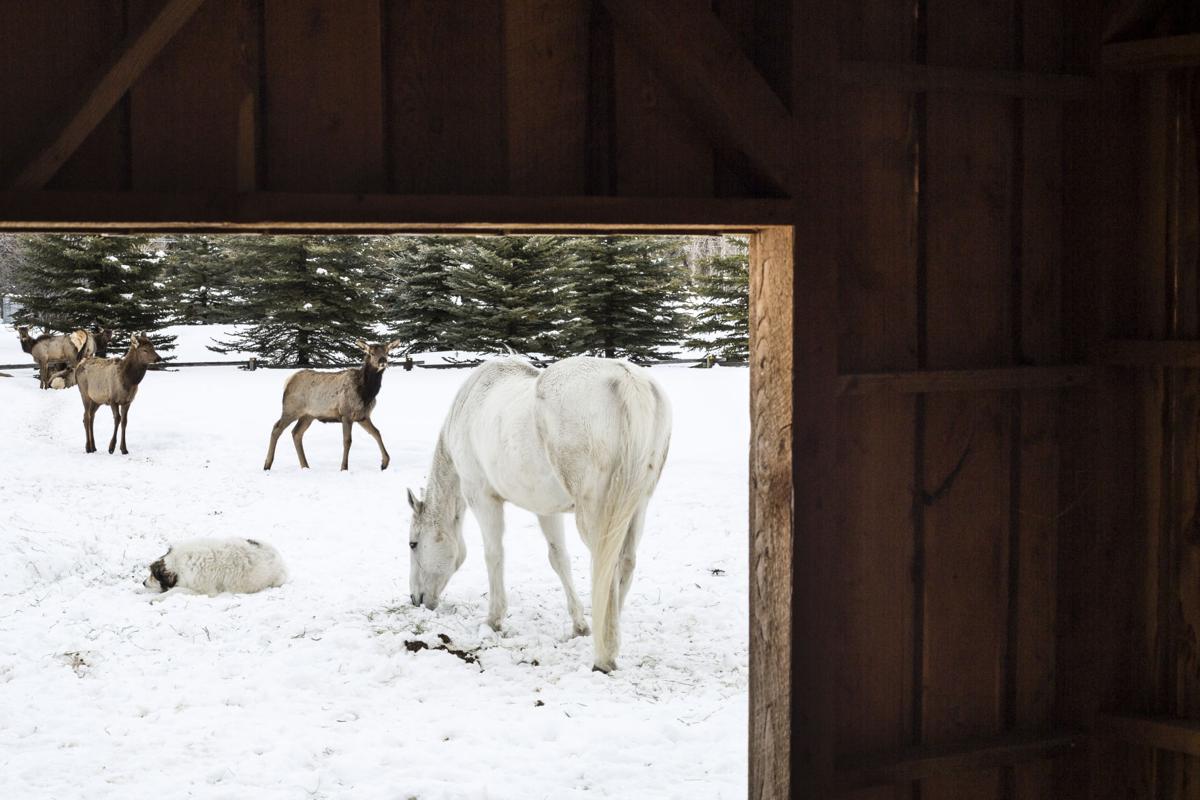 Elk cautiously make their ways back onto Gioshes’ property as her dog, Big Wally, rests, and her horse, Marley, feeds on hay Monday in Wilson. “I’m going to run out of hay in about a month ... but I’m also not going to sit here and watch these animals die in front of me,” Gioshes said.

Trina Gioshes brings hay out to feed her horses as a small herd of elk gather to mooch some Monday at her home in Wilson.

Gioshes tries to haze an elk from the only dug-out entrance to her horse pasture Monday at her home in Wilson. She advocates emergency feedgrounds because of the unusually harsh conditions animals have had to live through this winter.

Elk cautiously make their ways back onto Gioshes’ property as her dog, Big Wally, rests, and her horse, Marley, feeds on hay Monday in Wilson. “I’m going to run out of hay in about a month ... but I’m also not going to sit here and watch these animals die in front of me,” Gioshes said.

Limping and gaunt, the elk calf that’s going by the name “Gloria” this winter has grown ever more complacent around Trina Gioshes and her Pyrenees mix, Big Wally.

Facilitating the habituation is hay meant for horses, and the refuge of a covered shed and snow-free porch in front of Gioshes’ Nethercott Lane property. But Gloria is also obviously in rough shape, and his or her desperation and willingness to part from the herd are likely also implications of a winter that has buried all but the very top of Gioshes’ 5-foot-high buck-and-rail fence.

A herd that started off winter in the West Bank neighborhood numbering 53 animals has dwindled to 20 or 30 elk, Gioshes said.

Since she bought the Nethercott Lane land in 1989, Gioshes has never seen elk in her neighborhood this late in the winter, much less in such numbers. Her theory is that the animals are trapped by the deep snow, too far away to reach either the National Elk Refuge or South Park feedgrounds, and with no realistic means of leaving anyway.

“I wouldn’t necessarily say that those elk are stranded,” Hovinga said, “but they’ve been fed and they’re refusing to leave.”

The attractant — a source of food not covered by 4 feet of snow — is something that Game and Fish is considering distributing on a temporary basis to reduce wintertime mortality. Gioshes is among those in the camp that believes the wildlife deserve a helping hand in a winter that to date has deposited a snowpack 140 percent of average in Jackson Hole.

“We are the second richest county in the United States, and we can’t set up an emergency feedground?” Gioshes said. “I’m not saying every year. I’m saying this year.”

At noon today Game and Fish plans to convene a “online town hall” to discuss options on a statewide level. To participate, go online to WGFD.wyo.gov/winter2017. Wildlife managers will field questions and present research on options such as emergency feeding of deer and antelope, or killing coyotes to reduce predation.

In a winter that’s walloping much of the West, emergency feeding is underway on a large scale in southern Idaho and Utah in the Bear Lake area. At Idaho’s Tex Creek Wildlife Management Area, just east of Idaho Falls, as many as 4,000 elk are on the dole where they would usually be foraging natural winter range. On a more targeted basis, feeding is underway in Colorado, where it’s meant to pull deer away from highways.

No feeding since the ’70s

Wyoming hasn’t fed deer on an emergency basis since the 1970s, said Renny MacKay, Game and Fish’s statewide spokesman. Only “specialized feed” is safe for deer during winter, he said, and scientific research has shown that feeding is not a surefire way to increase survival during harsh winters.

Routine feeding of elk has been part of the wintertime landscape in northwest Wyoming for a century. And it’s also happening on an emergency basis in the Buffalo Valley, where Game and Fish has contracted with a private landowner to feed a herd of 250 elk, Hovinga said.

Besides Gioshes a number of Jackson Hole residents would like to see a serious discussion about emergency feeding for other species. The deep snows have pushed mule deer down lower than usual into the valleys, and with daily frequency into the path of traffic. Dozens of pronghorn, a species that usually migrates out of Jackson Hole, also face potentially perilous weeks and months ahead while they try to overwinter on the National Elk Refuge.

Joanna Johnson, a board member of the Concerned Citizens for the Elk, is one person who thinks deer are deserving of feed.

“Starvation is starvation,” Johnson said. “It’s going to be sad, and not just here, all over Wyoming.”

“It’s not hard for anybody to see that there are no wind-swept slopes,” Miller told commissioners. “I know feeding’s a really complicated discussion, but the fact that we’re not even discussing it means that the public is not being educated about what is appropriate to feed, if you choose to feed.”

Controversy about the elk feedgrounds, she theorized, has stymied the conversation.

“I do think that the commission could take a leadership role on this,” Miller said. “You’re not going to get it from the environmental groups, because you’ve got the feedground issue.”

Torn by the issue

Franz Camenzind, a retired conservation biologist, said that he is torn over what is the appropriate response to addressing the winter-kill.

“Disregarding climate change, this is a natural event going on. Let nature run its course,” Camenzind said. “Having said that, it hurts my heart to see this happen. I have deer literally sleeping up against my house. You want to help.”

The veteran conservationist pointed out that much of the prime natural winter range in the valley has been displaced by human development. Stepping back, recognizing the science and “taking the long view,” he said, is the best path forward.

Gioshes said she has tried to keep the elk out of her hay. She has boxed her stockpile in with panels and surrounded it with electric fencing, though neither method worked. Gloria is now around all the time, she said, and the rest of the herd has memorized her feeding schedule and dutifully appear.

“I’m going to run out of hay in about a month, so I won’t have any hay to feed my horses,” Gioshes said. “But I’m also not going to sit here and watch these animals die right in front of me. They’re suffering.”

Seriously? this is a very harsh winter, just feed them!!!

Is there any possible way snowmobiles or a trail groomer could blaze a trail to get these elk a path to the refuge?